Our day of rest started with a slight disappointment – Saumur’s Petit Train was not running. We soon found out why, as we walked through the streets towards the path up to the château – the town was absolutely mobbed, and lots of people were dressed in clothes straight from the 1940s, pushing ancient-looking bicycles. There were men in braces, grandad shirts and flat caps, and ladies in flouncy polka dot dresses with their hair in complicated shiny rolls, or else held back with a brightly coloured bandeau. It was a ‘Vintage Vélo’ festival! 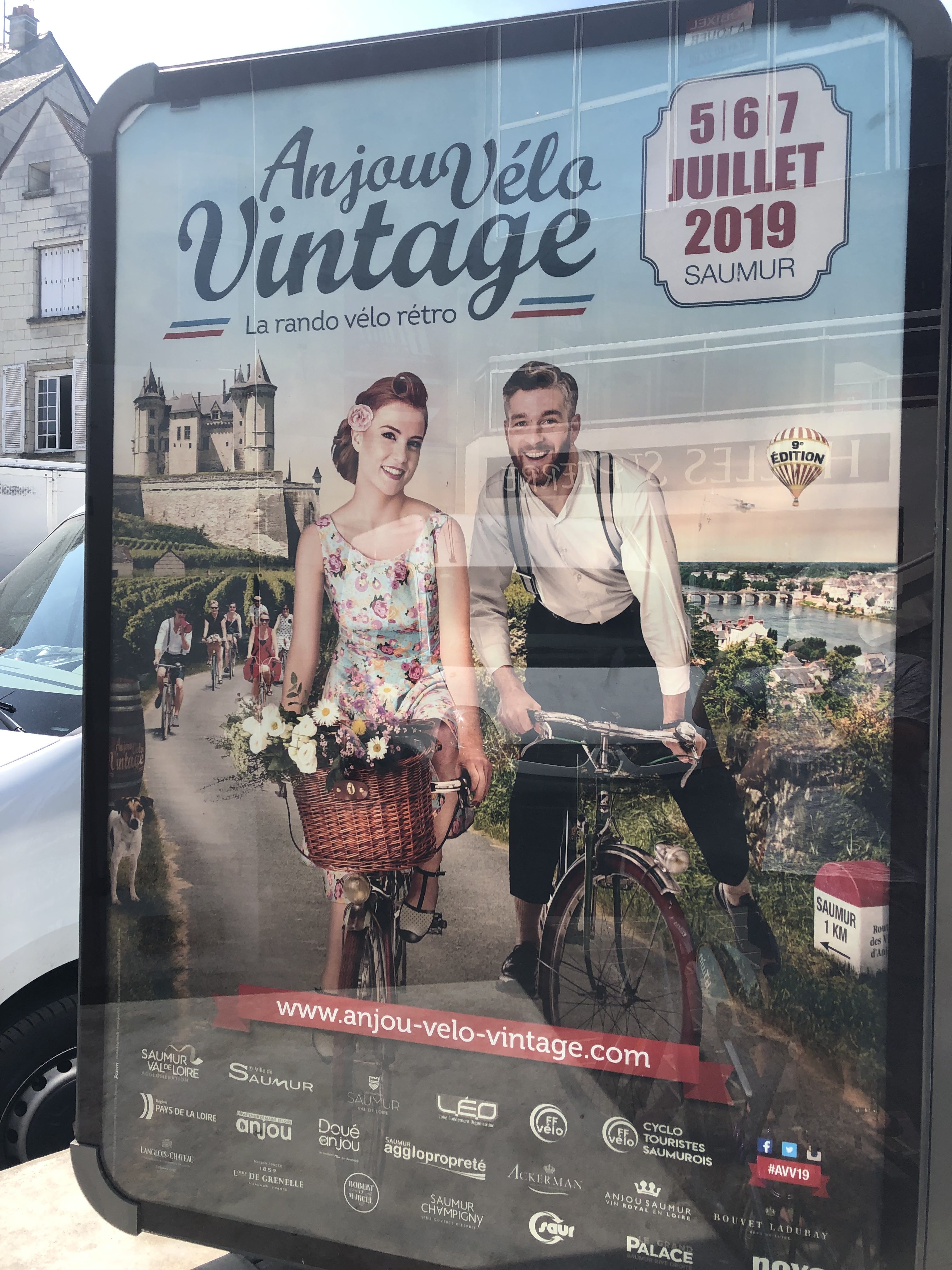 France is very, very good at this sort of thing – all the restaurants and market stalls were participating, waiting staff and stall-holders all dressed for the occasion, and there was bunting and bicycles decorated with flowers everywhere. 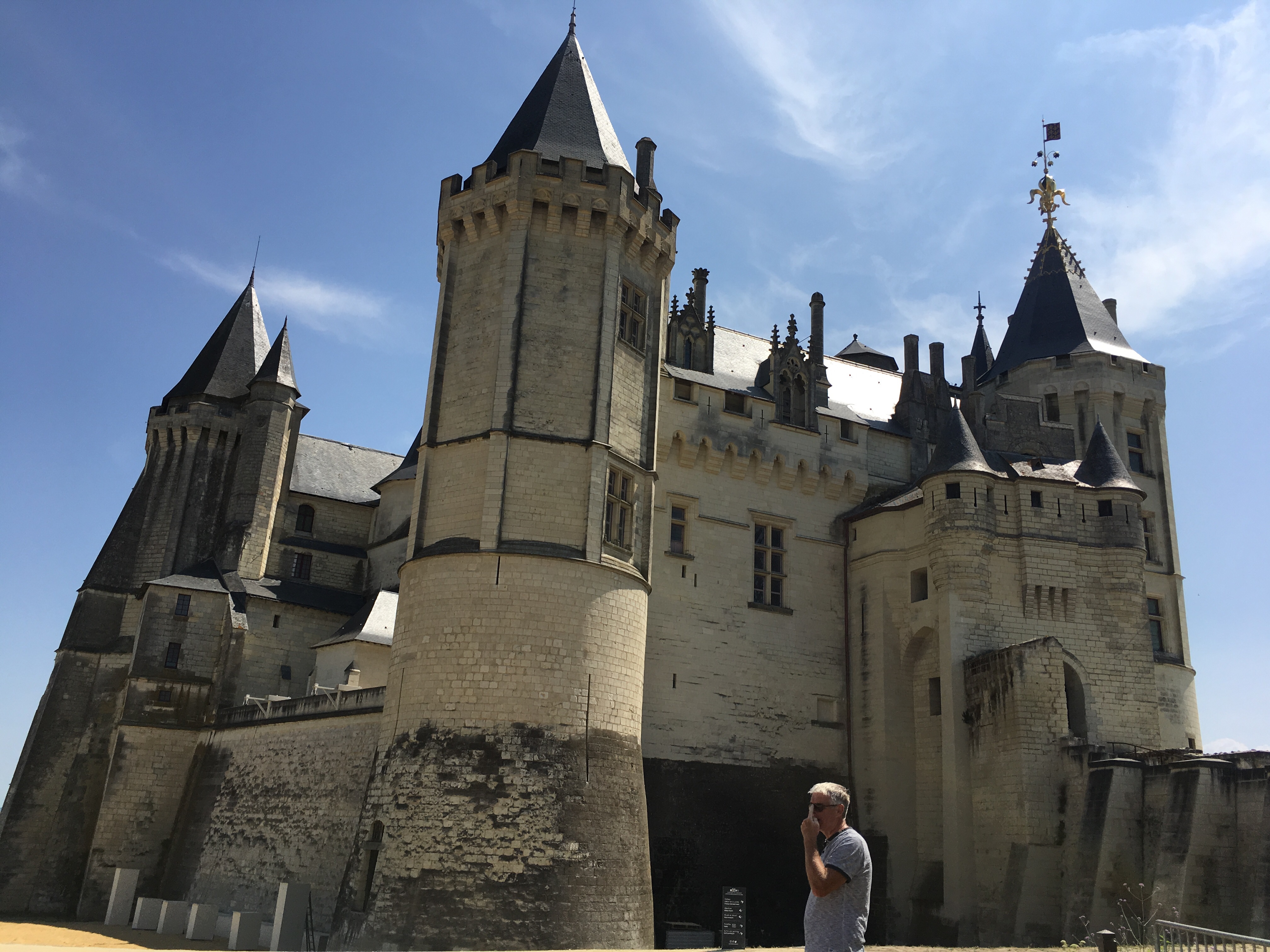 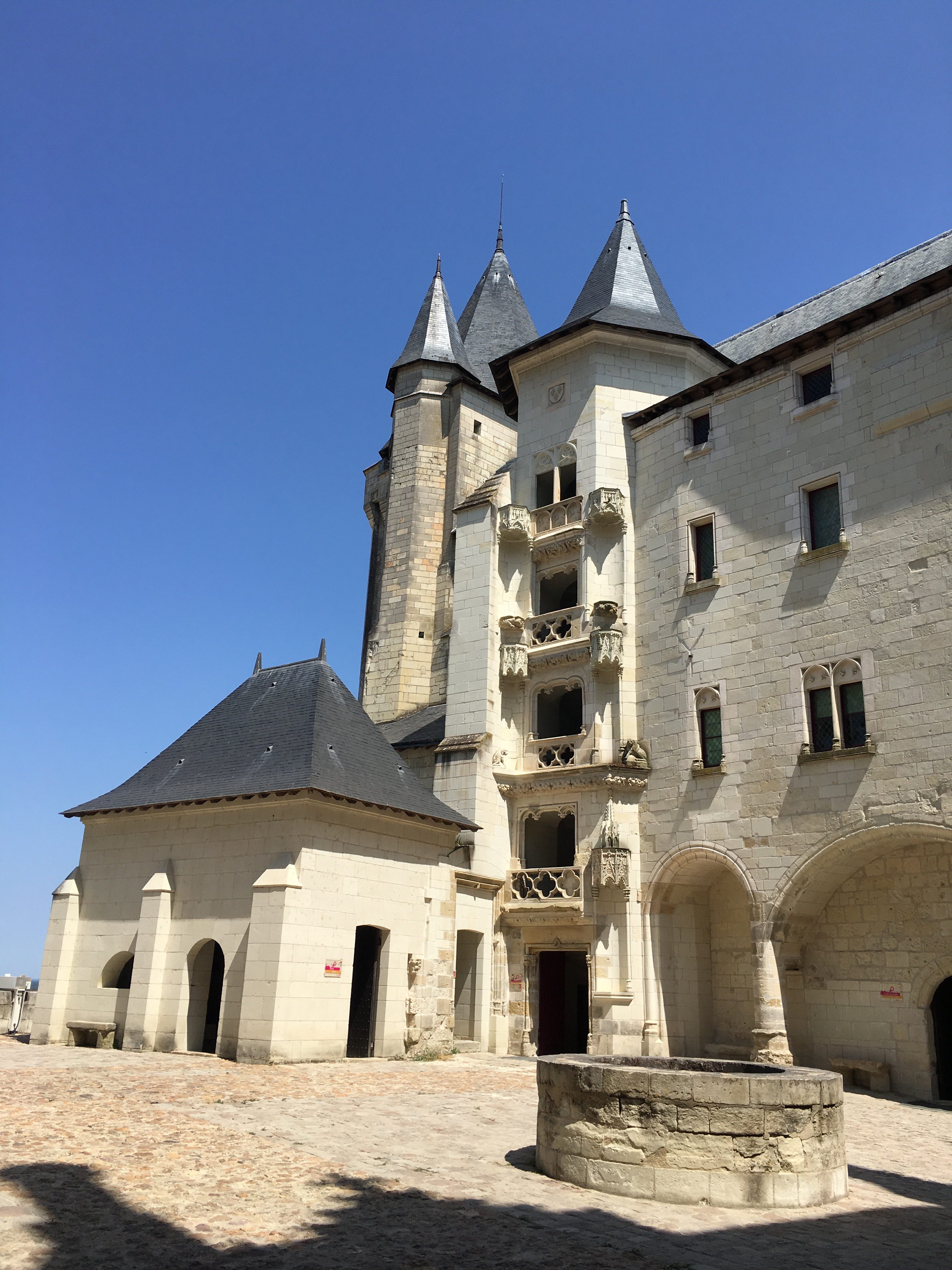 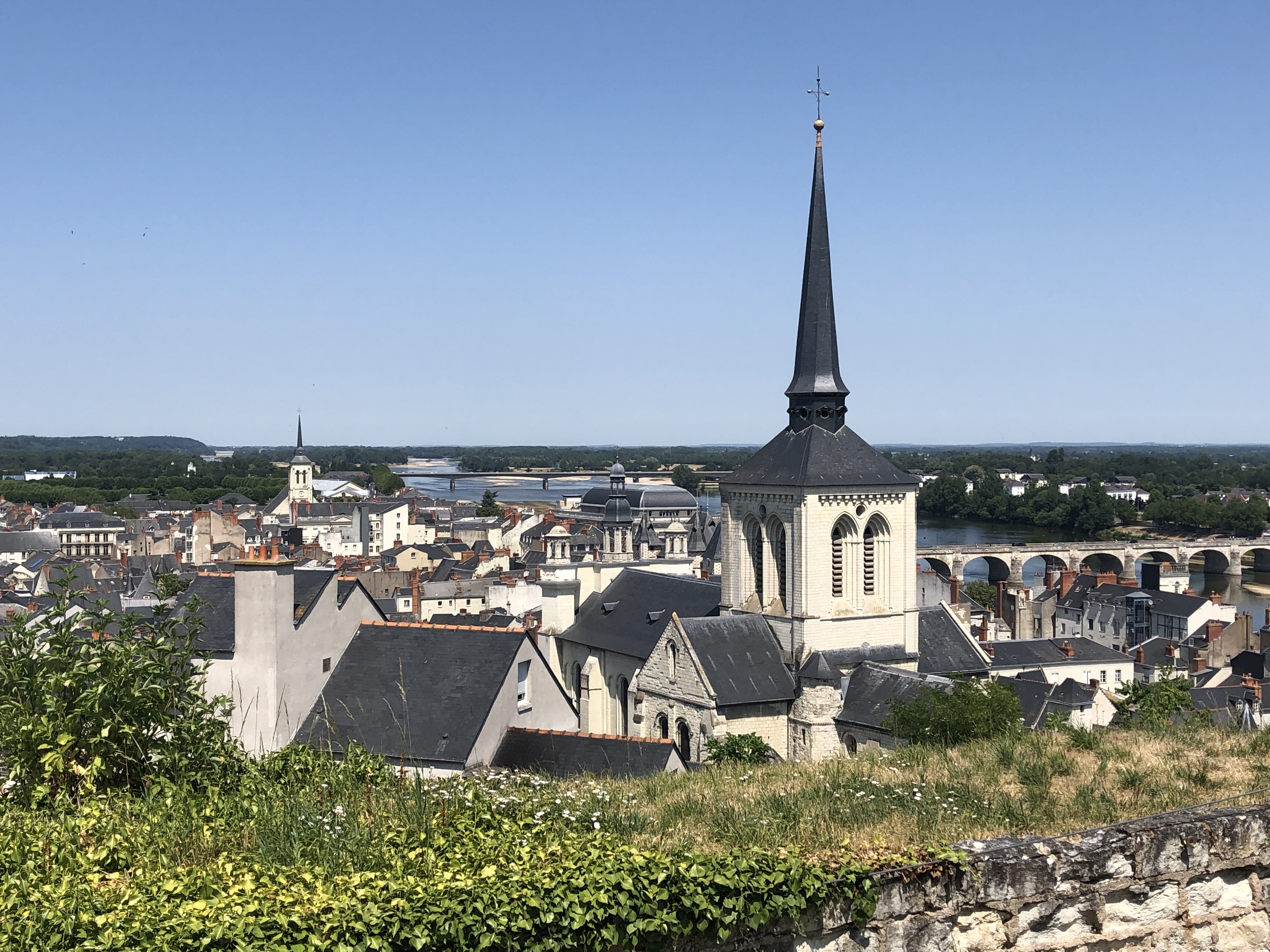 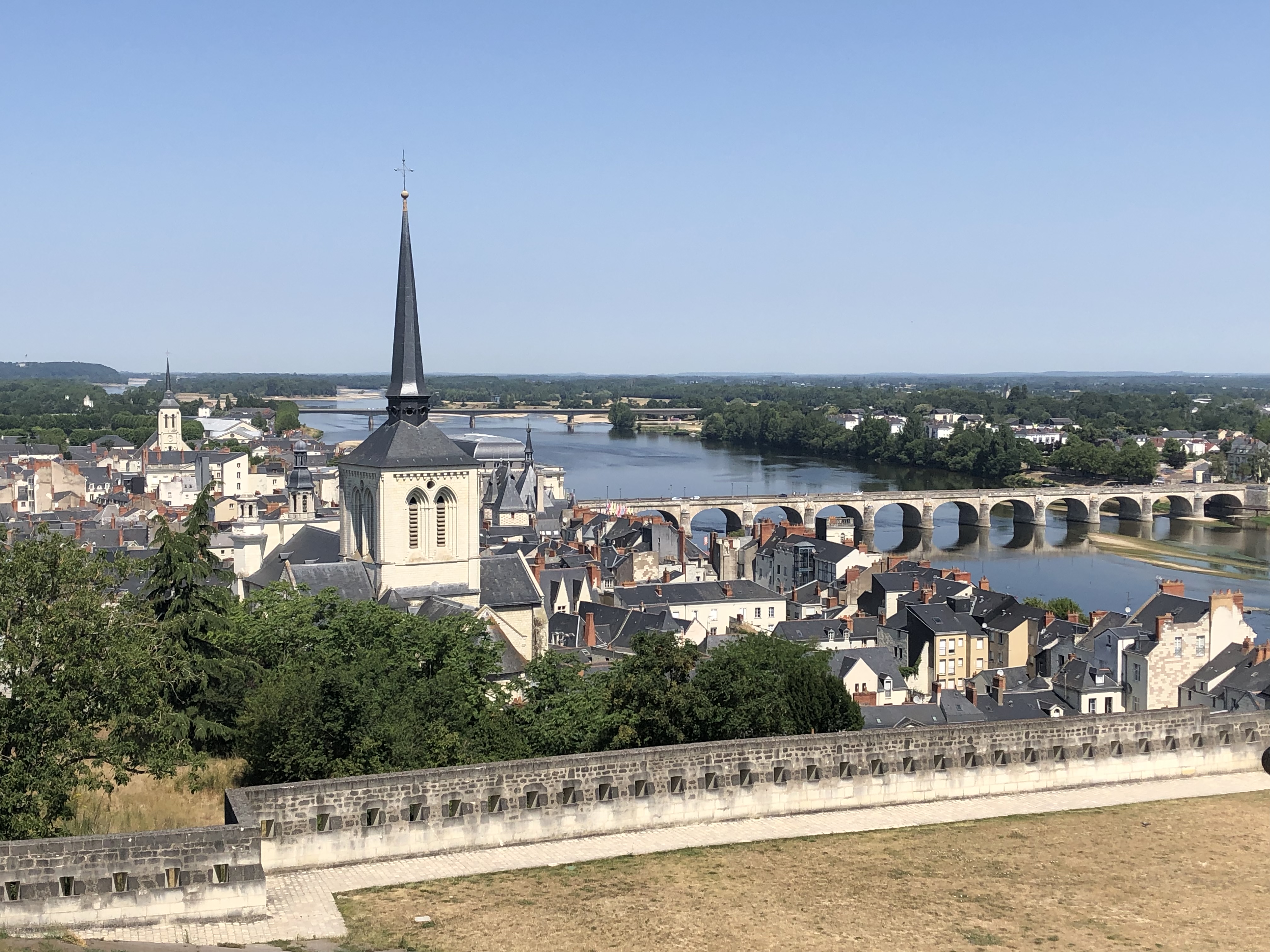 After looking around and enjoying the views from the château’s lofty position, we retraced our steps and found a place to have lunch, and to try the Saumur white wine, which we enjoyed very much. 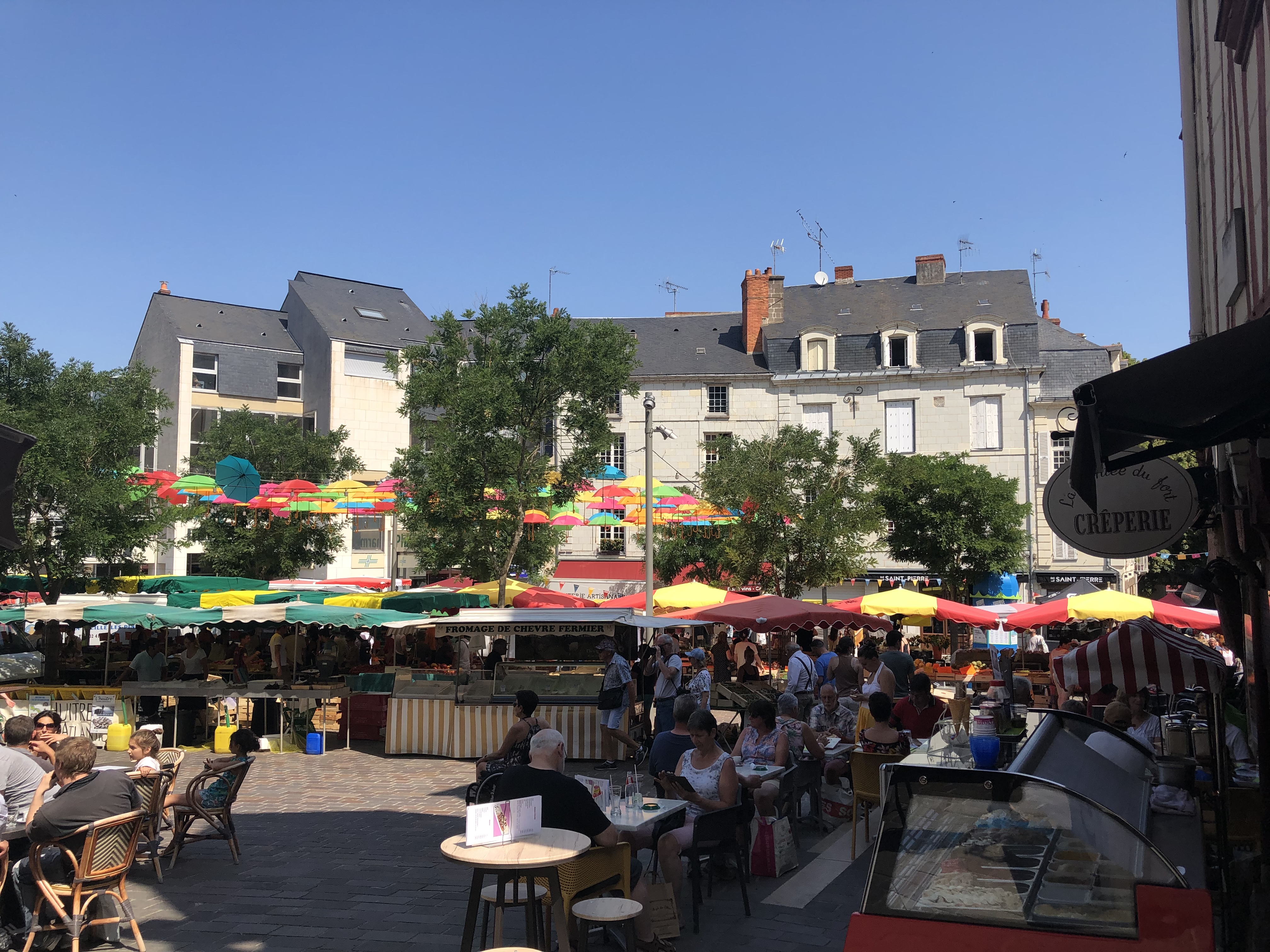 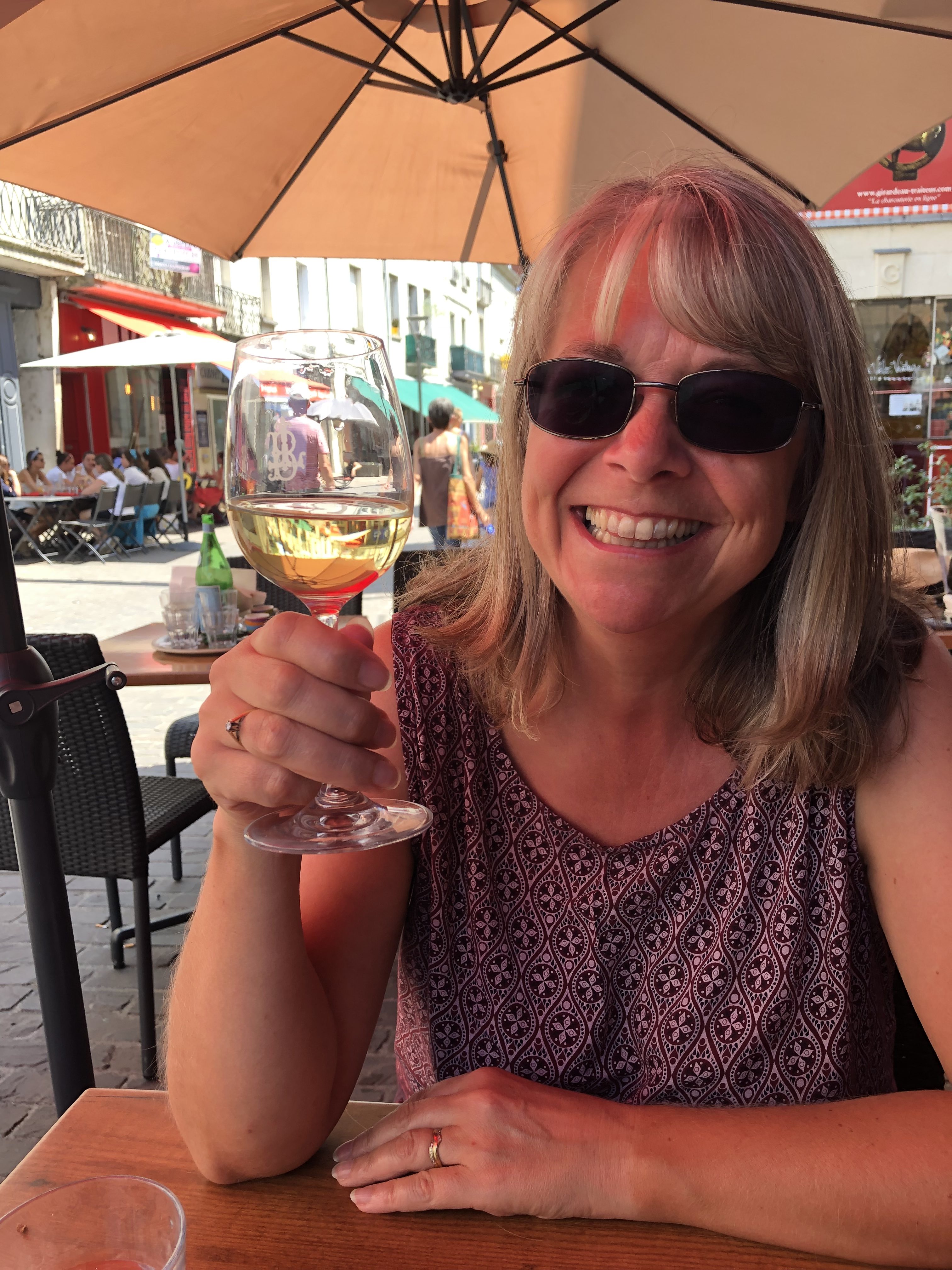 A relaxing afternoon, a bit more laundry and onward planning, and then dinner in the town, watching all the vintage festival goers in their finery, and our rest day was done. One last sunset from our apartment, and so to bed.

No need to set off too early this morning, with only 55km to cover. As we left around 10:30 we encountered the ‘active’ part of the Vélo festival. There were even a few tandems! 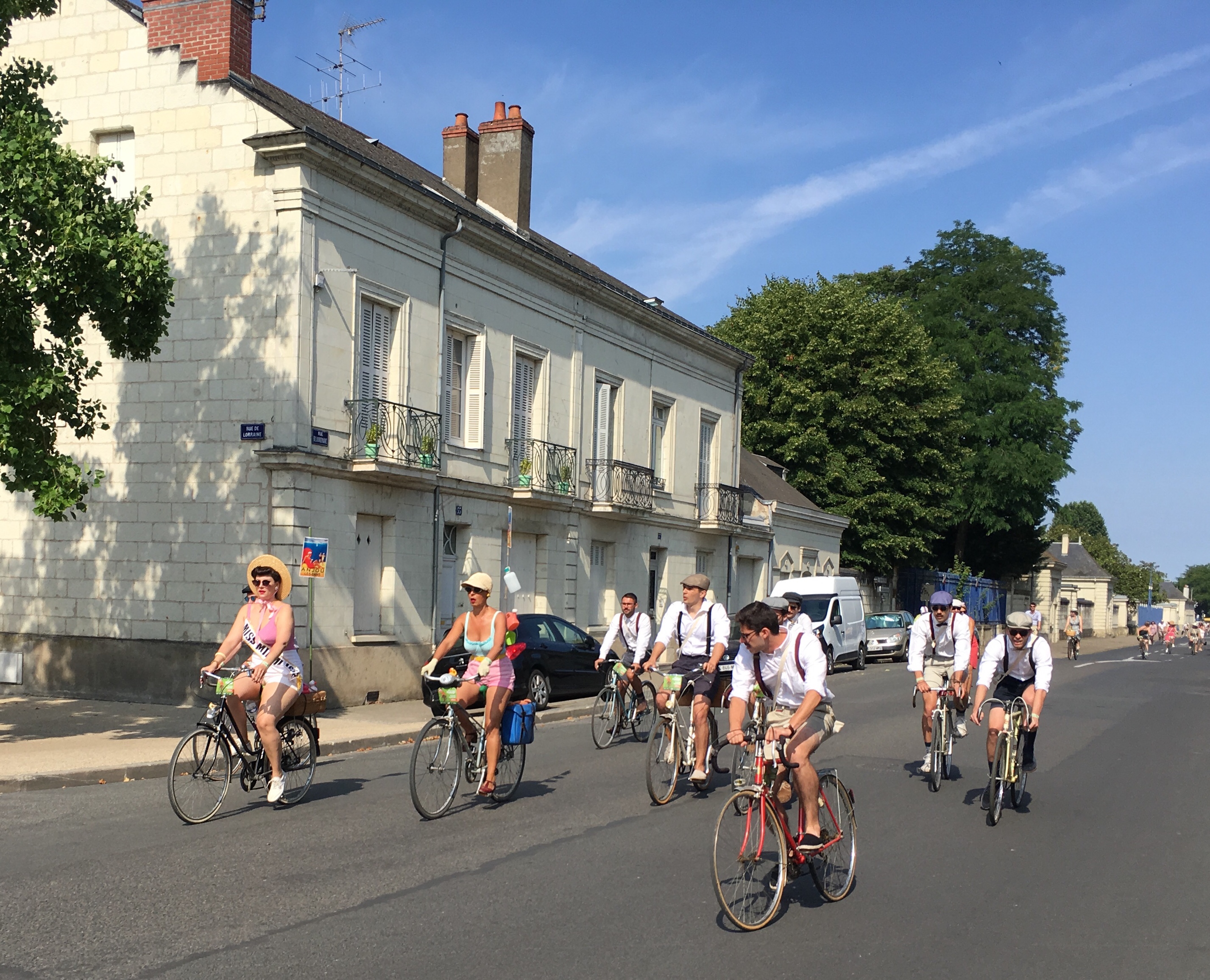 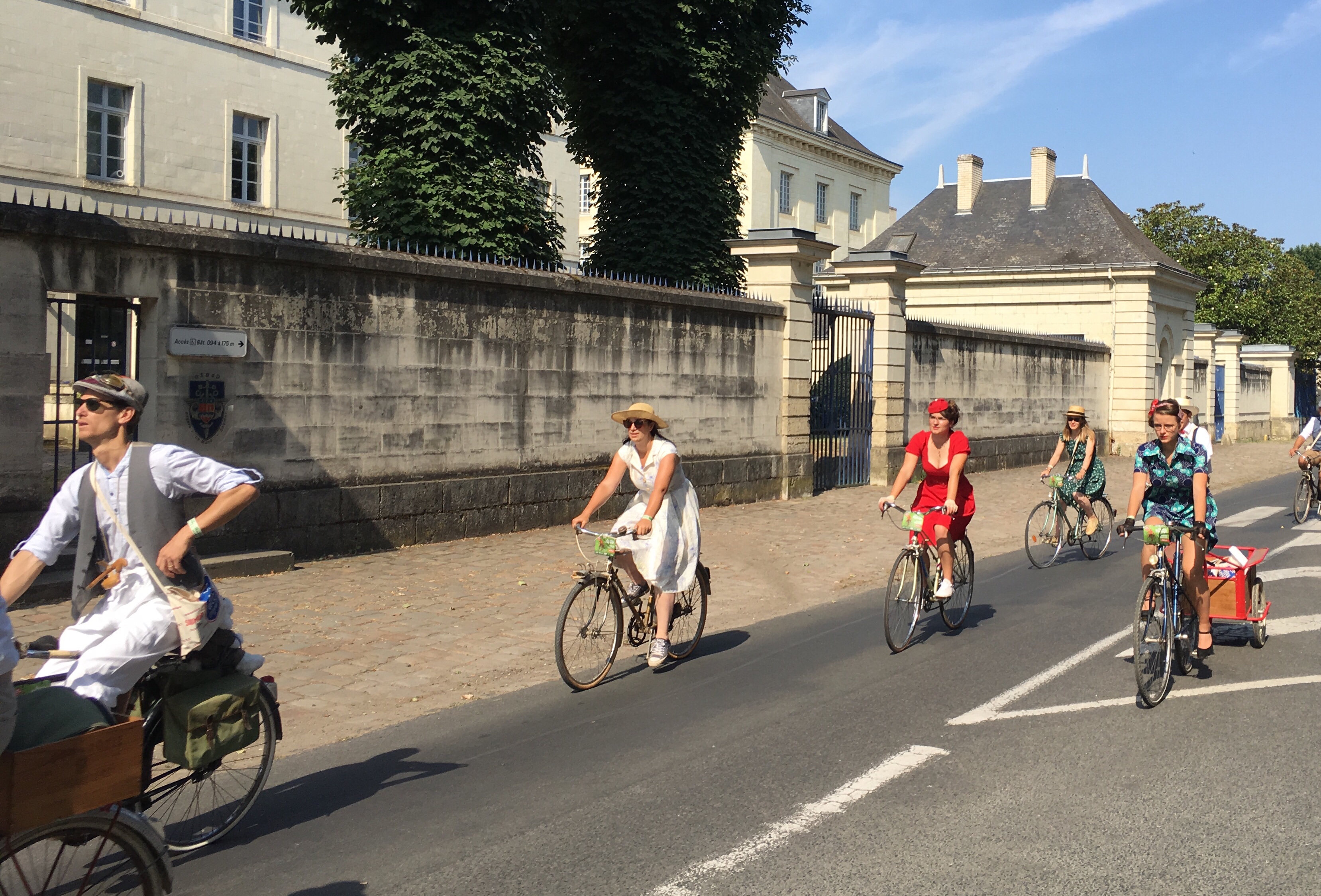 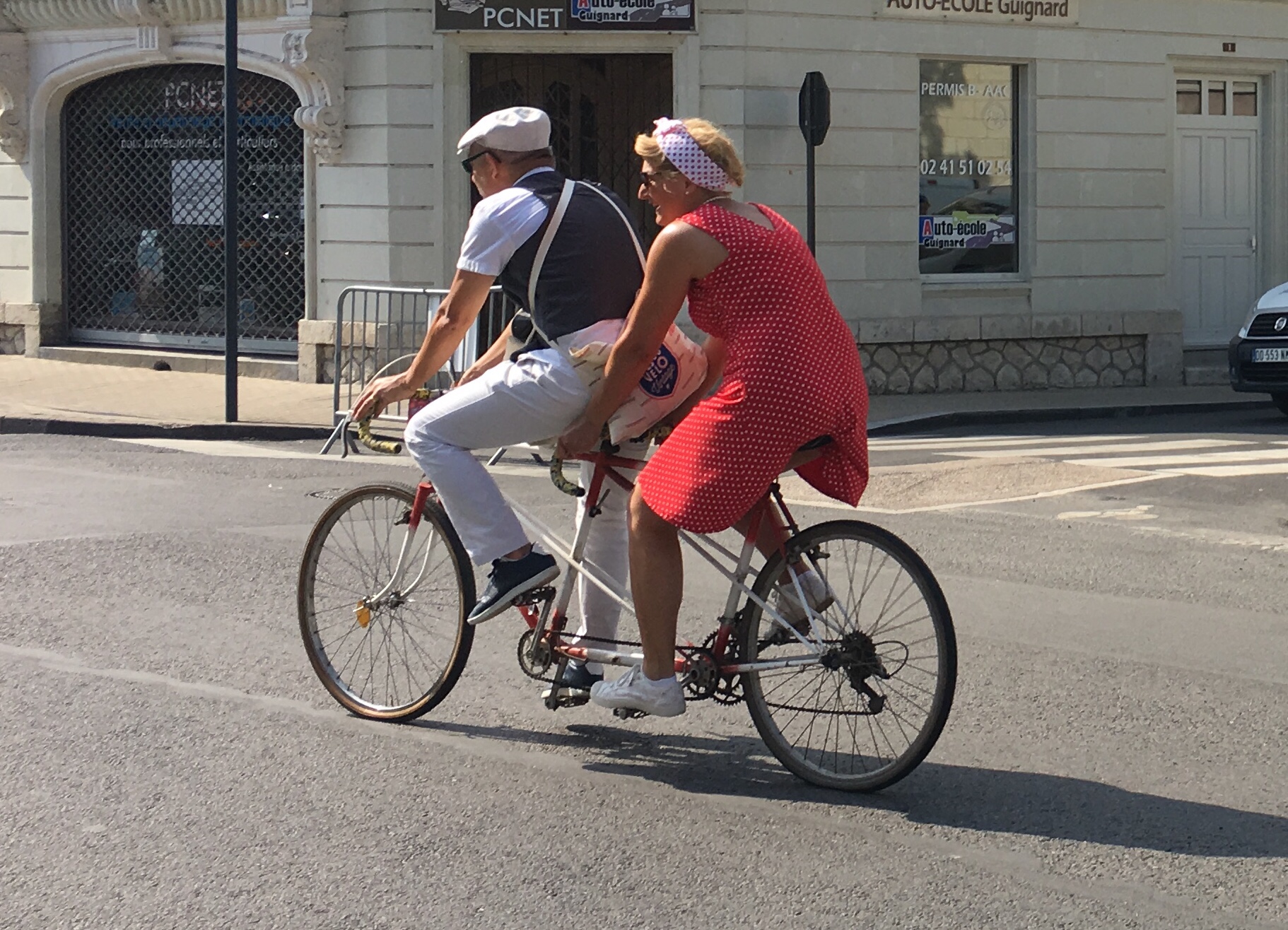 We continued to see people doing the festival route for at least thirty kilometres outside of Saumur, and some of the roads had been closed to traffic to make it easier for them, which we also enjoyed, of course.

We also saw a couple of horses (not in vintage wear). 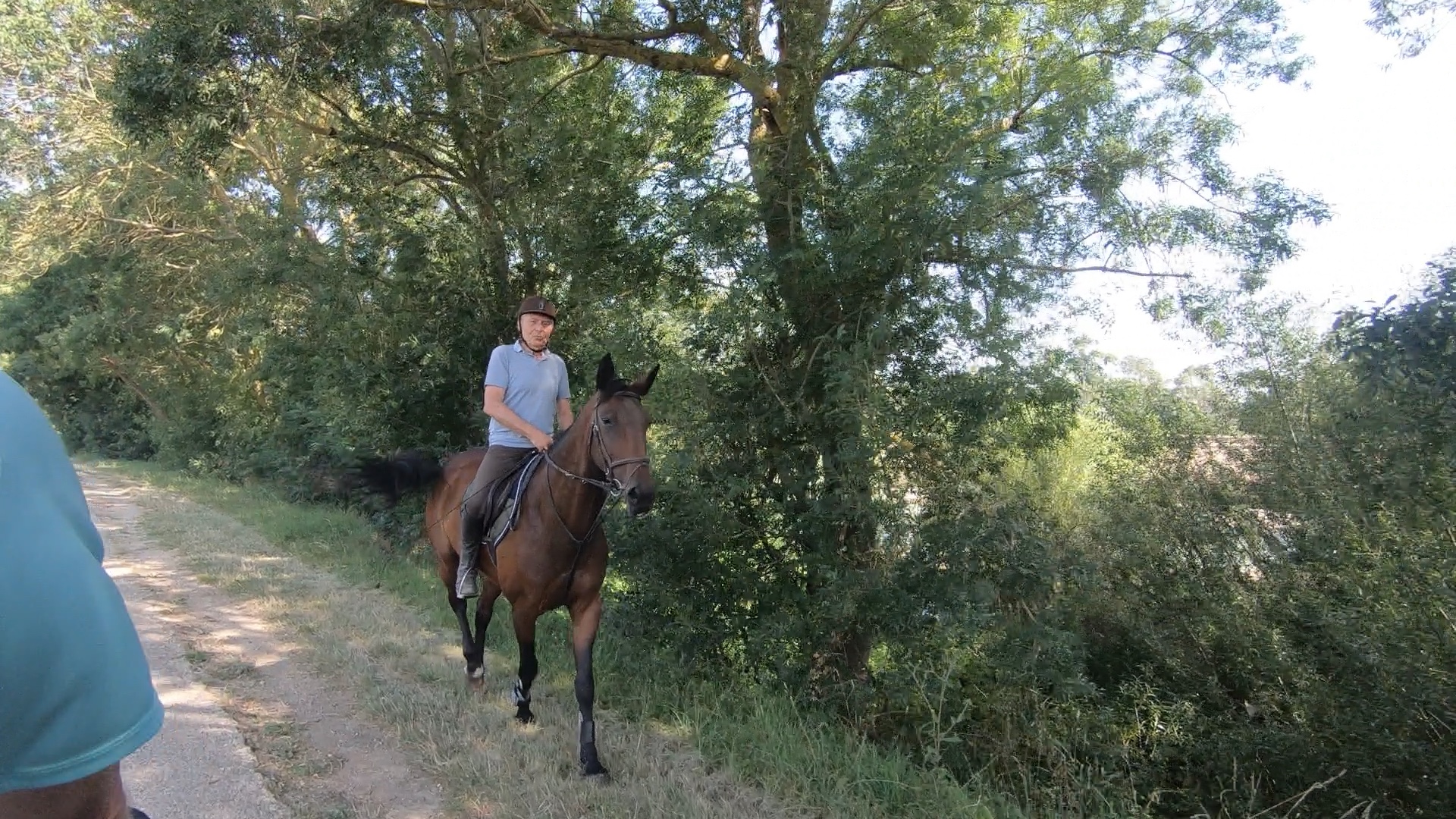 Everywhere was pretty quiet anyway, it being Sunday, and we pootled through the countryside, following the very twisty official route. We didn’t see much of the river, it what we did see was as lovely as ever. 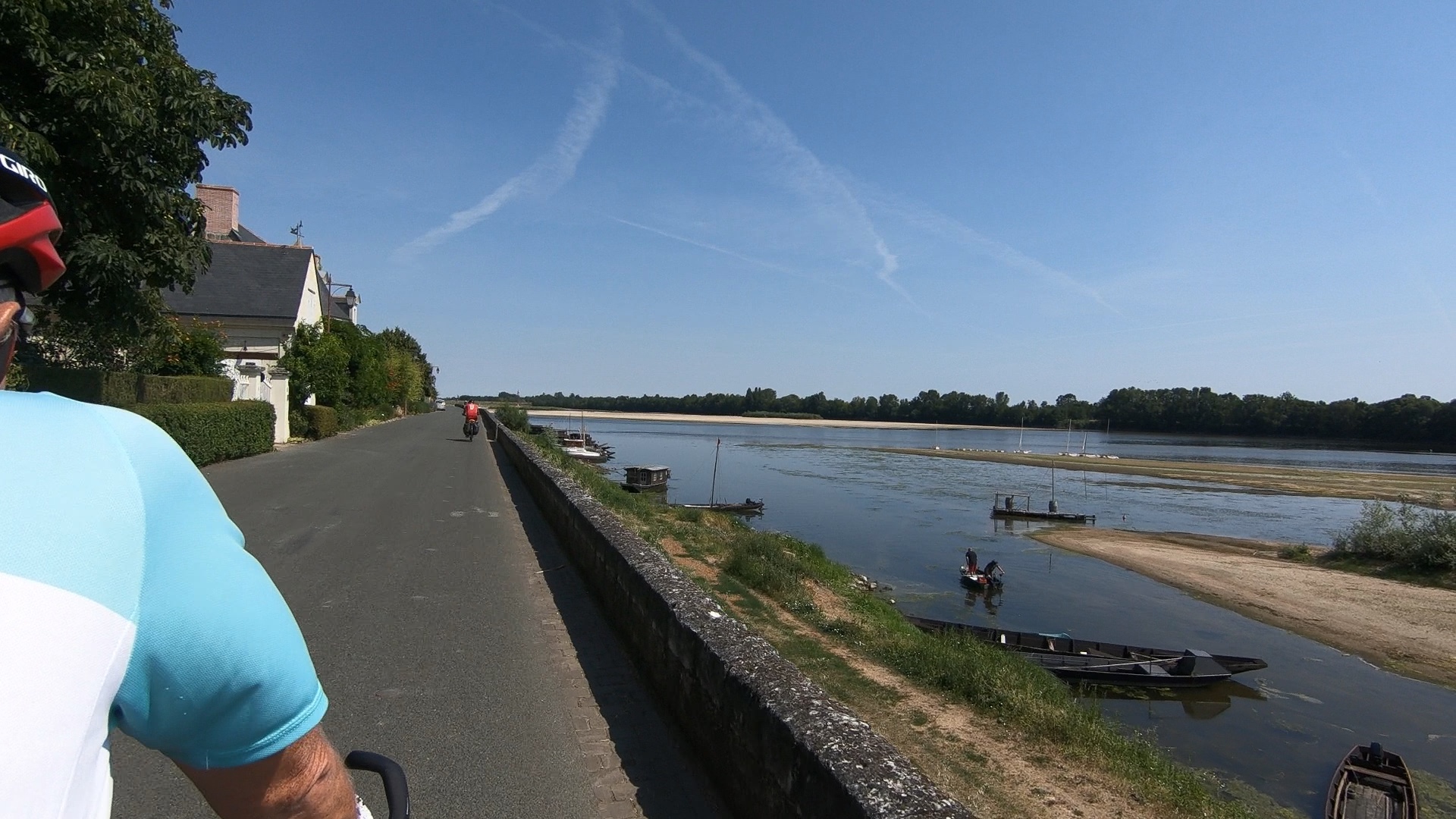 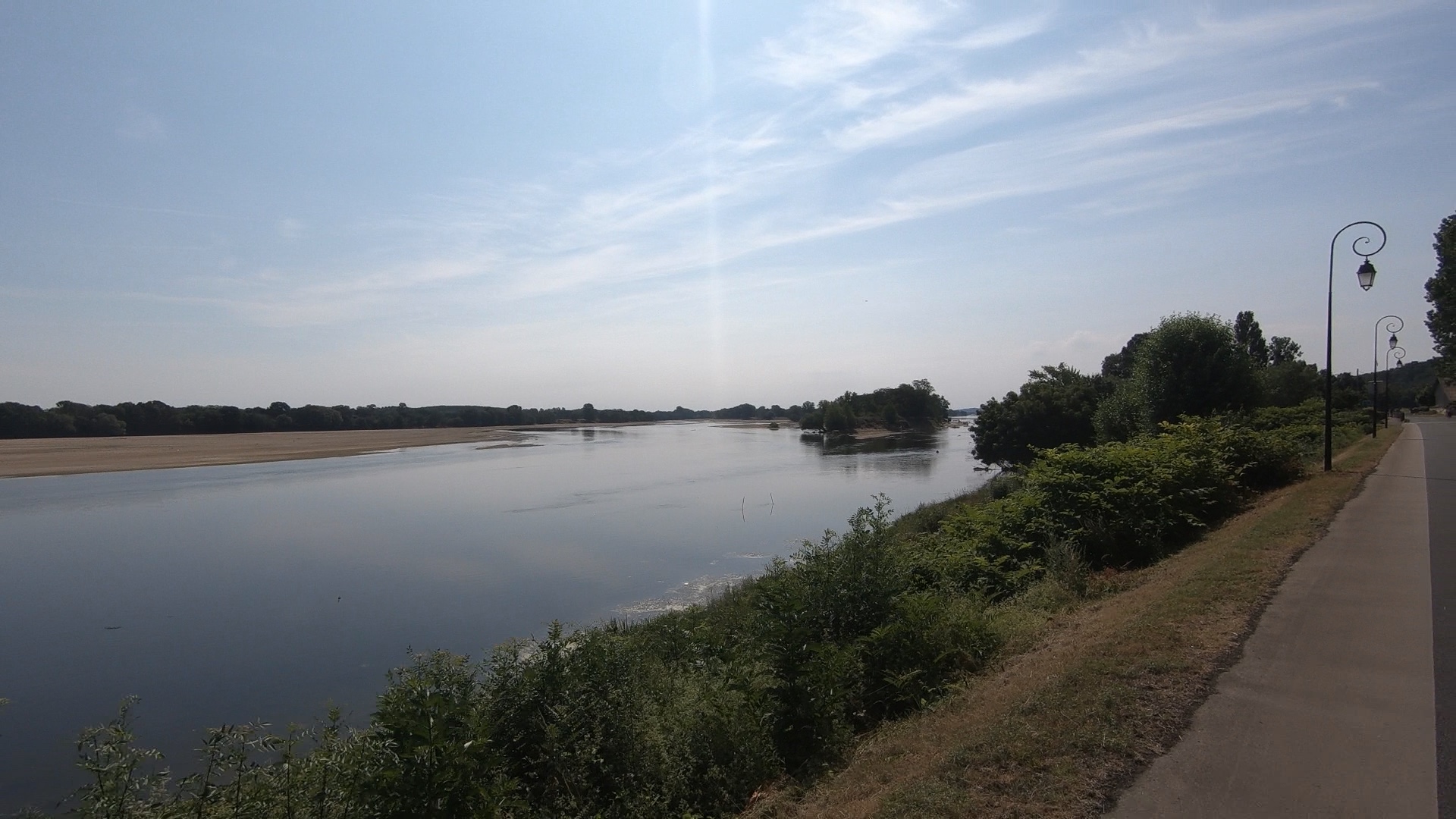 The surfaces were varied, quite a few were pretty slow, uneven, chalky or powdery, so we weren’t making great time, but we weren’t particularly worried by it. We stopped for a drink and a cereal bar after failing to find a place to take lunch in St Rémy. There had been a restaurant before the bridge, but neither of us felt very hungry yet, so we decided to push on. Not long after, a heavily laden cyclist coming in the opposite direction hailed us to ask if there was anywhere to eat coming up, so we told her about the place by the bridge. She was on a 3000 mile trip, headed for the Massif Central, Canal du Midi and beyond. Chapeau…

Then, what’s this? A very complicated-looking wiggle in the route, and when we arrived at the crossing of a narrow waterway, there was no bridge. There were slipways on either side, and a little boat thing was floating about in the water, but no operator, and of course, it being Sunday…. 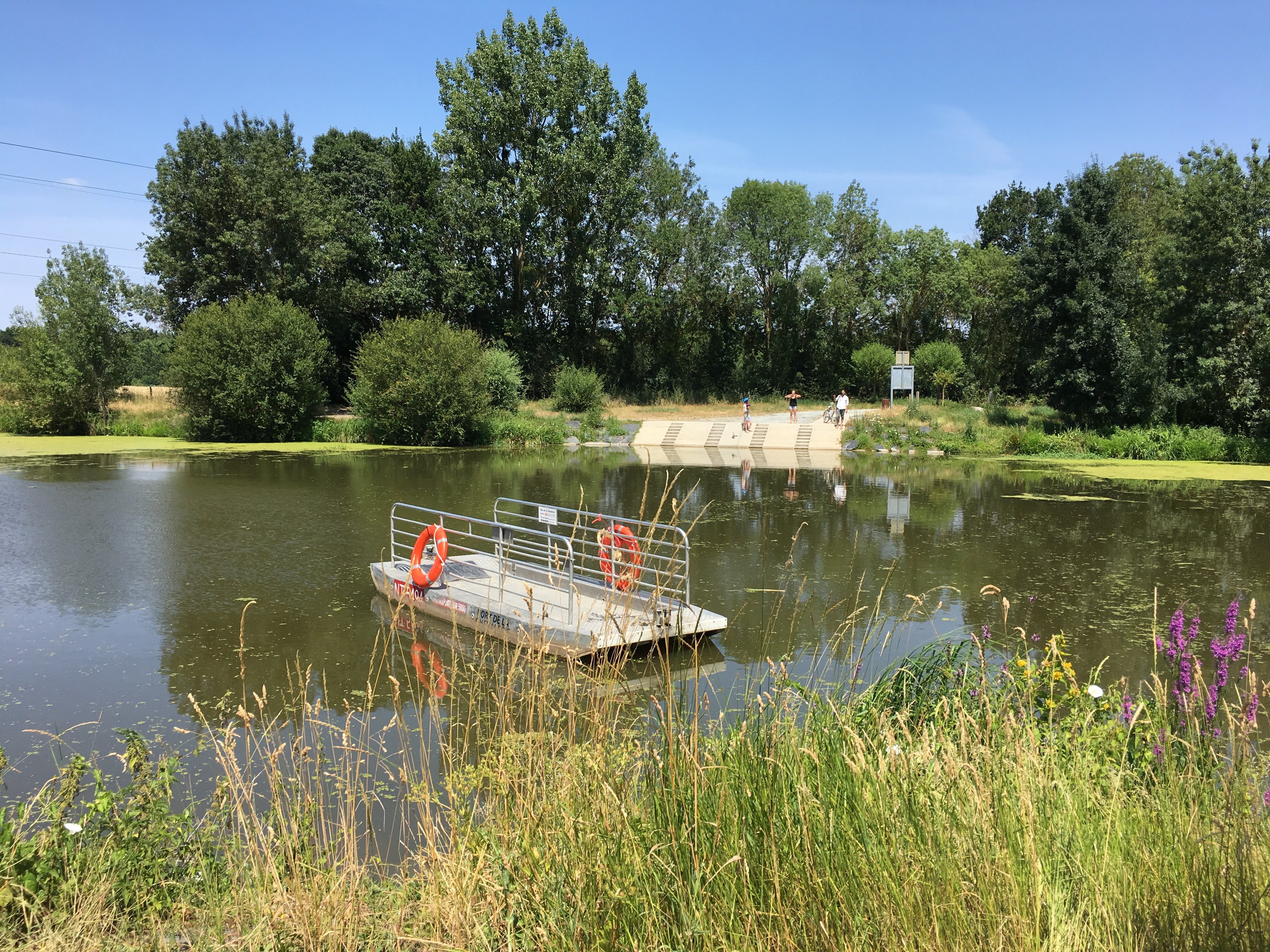 This looked problematic. There were instructions as to how to work around by a nearby road bridge if the ferry was not operating, and we were just about to set off to do that when a French family arrived at the opposite bank and hailed us. We waved that we were ‘going around’ and then they started hauling the little boat to their side of the water. Aha! A self-service chain ferry!

After they’d arrived at our side we loaded the tandem on, plus all our bags and ourselves, and the Captain manfully hauled us across. 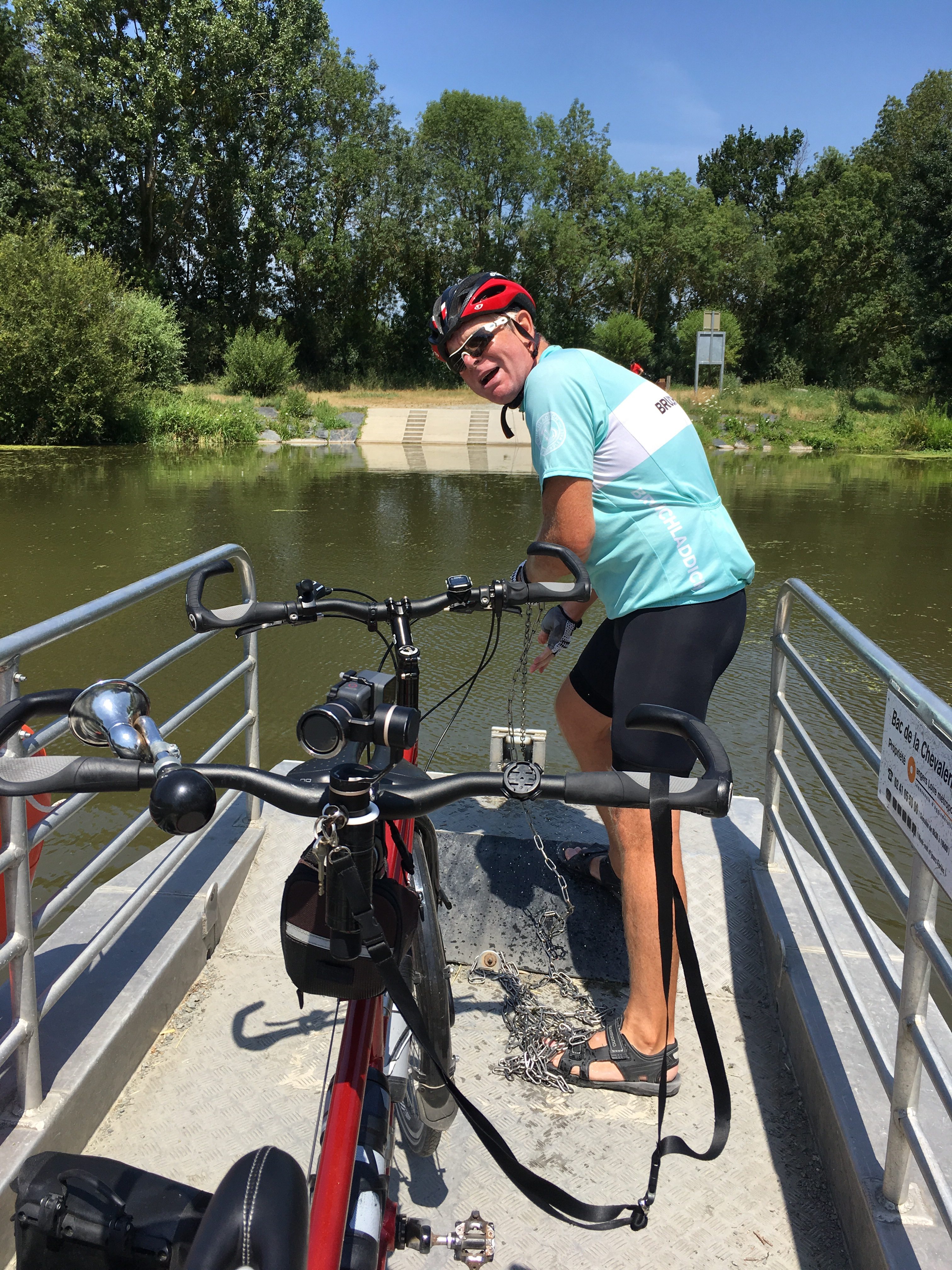 Another set of French cyclists was waiting to go across and they helped us get everything off before loading themselves on. All very exciting!

Not far to go now, and we’d resolved to defer lunch til we arrived in Angers, our destination for the night. We entered a small park which said it was on the site of the former Angers slate mining area, and sure enough there were piles of slate everywhere. It was a sudden and unexpected switch in the geology. 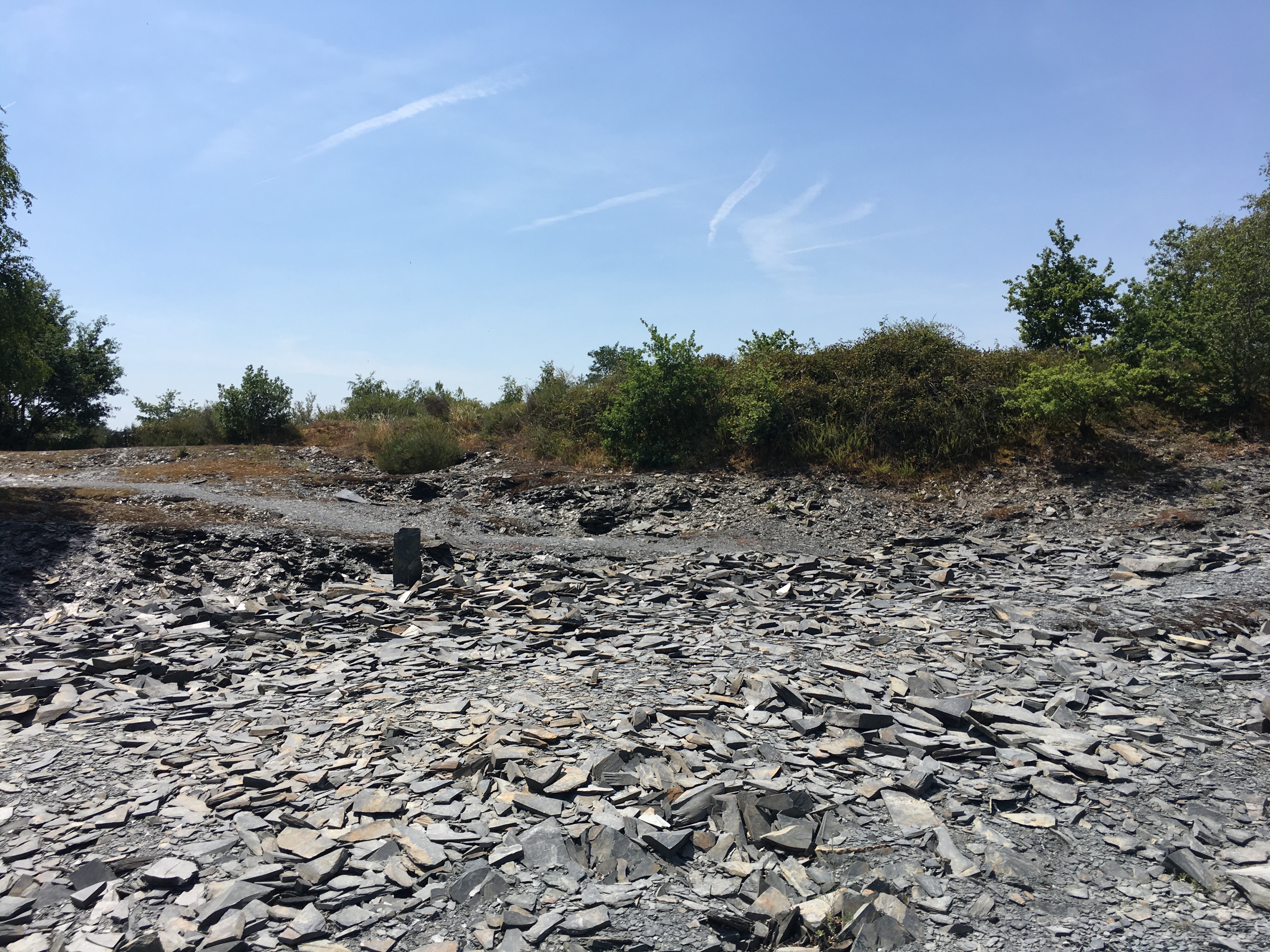 Before long we were arriving in the city, and stopped for our much delayed lunch, and lots of water. A temperature board on the building opposite indicated that it was 29 degrees. We found our lodgings, which are in an amazing building, above a shop, in one of the oldest buildings in the city. Extraordinary!