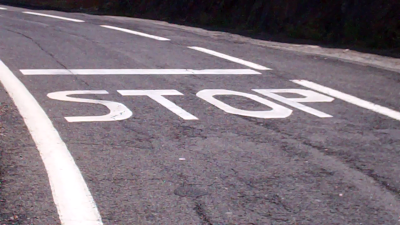 We spent three nights in Collioure, enjoying the atmosphere among the narrow mediaeval streets. On the final day our tandem bags arrived by courier. The tandem has “S&S couplings”, a feature enabling us to disassemble it into two main sections plus a few aluminium tubes. This means that we can pack it into two large but fairly heavy bags. The processes of disassembly and packing took a couple of hours, and were undertaken in the hot central courtyard of the hotel. By the time we’d finished we were ready for the pool – sadly the weather changed and the idea of a cold pool suddenly seemed far less attractive. Once everything was packed we were able to enjoy our final evening meal in one of Collioure’s attractive squares. A final glass or two of the local wine, and we were ready for our journey home.
The train station in Collioure was only a few hundred metres away, yet the walk seemed to take ages when carrying the tandem bags. All went smoothly though, and we caught the train to Montpellier before changing to the TGV to Paris. After an enjoyable overnight stay there, and a final entrecôte, we returned home via Eurotunnel and domestic rail services.
Now, three weeks later, we’re looking through the video we recorded en-route for photographs with which to decorate this blog. It’s an enjoyable process, and underlines how much we’ve already forgotten in only a few weeks. So no better time, then, for some overall reflections! 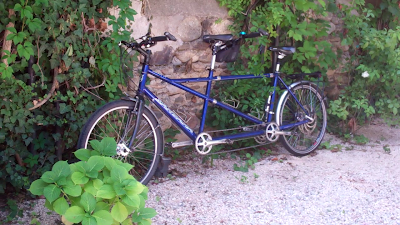 The trip was a hugely enjoyable experience. It was the longest ‘holiday’ either of us had ever had, and the result was that we arrived home completely relaxed. Going back to work on the Monday was, inevitably, something of a shock. The tandem was taken straight away to J.D. Cycles for a service, and to have the rear wheel re-built. John provided an explanation for our spoke breakages – he believed that the wheel had been built using a batch of defective spokes. This would provide an explanation for why the spokes broke at the rim end – in almost all cases they normally break at the hub end, where the spoke curves round to enter the hub. He also fitted a replacement inner chain-ring.  Other than that, the tandem was in good shape, and it wasn’t too long before we took it out to Litton on familiar Yorkshire Dales roads. Despite the inevitable headwind it felt good, and our legs were strong. We even remembered to cycle on the left hand side of the road…
On to the inevitable subject of the French! The French people we encountered were, without exception, friendly, helpful and fascinated by our trip. Not one of them blanched at our execrable accents. Some of them went well out of their way to help us. Hoteliers, waiters, cafè proprietors, taxi drivers – everyone was lovely. One or two of the bike shops could have been a bit more helpful, but they were busy, and (there being no great tradition of cycle touring in France) couldn’t really respond to our more urgent requirements. So let’s hear it for the entente cordiale! We’ve also discovered many places we’d like to re-visit. In particular, we liked the Pas de Calais area, Péronne, Reims (despite the one-way system), all of Burgundy, Tournus and Orange.
So, what worked well?
It’s always worth spending a lot of time on the planning of a trip like this, and it is of course an enjoyable process in itself. The technology has improved massively since our LEJOG in 2008, and we were able to look at much of our route in advance on Google StreetView to check how much traffic there might be on a given road. D-roads in France seem to vary hugely between lovely quiet single-track roads to busy dual carriageways, so it was very useful to be able to see them in advance. Gary the Garmin was also much improved – now having a ‘don’t recalculate’ option which meant that if we strayed off route he was not inclined to calculate a silly detour as he had repeatedly on our LEJOG trip. We tended to book accommodation online for a couple of days ahead, and although for some people that might be too ‘last minute’, we do like the flexibility. It also meant that we were able to re-route easily when we wanted to, after spending time on getting repairs to the tandem done, or where we wanted to go more slowly in the July heat. We also like the varied mileages (kilometrages?) we’d planned, some days more than 60 miles, others just over 40 miles. During the planning process that was just how it worked out in order to overnight in places in which we wanted to stary, but in practice it was good to have that variation – a good challenge on longer days, and an opportunity for a longer rest or some local sight-seeing on shorter days.
What will we do differently next time?
Well, we’ll take six replacement spokes next time! Also, we’re considering acquiring two small front panniers, just so that the weight distribution on the tandem is more even. Other than that, the only thing we can think of is that we won’t cycle on chalk-clay paths after rain…
What’s next?
Well, whatever it is will have to wait a while – we can’t take a month off work every year. Inevitably, though, we’ve thought about it already. The tentative plan is to cycle from our favourite ski resort of Breuil-Cervinia (next to the Matterhorn) down to the toe of Italy, and possibly on through Sicily. The distances involved are similar, though the higher temperatures may mean we have to select our month carefully. It has the huge benefit of a 20 mile downhill start, though!