Our flight from Sydney took us straight out to sea in an easterly direction. As far as we can determine there are no islands at all between Sydney and Auckland, so with nothing to see we concentrated on enjoying the wine and food. Well, I did, at least – Clare was busy writing the last blog entry. After a smidgeon over three hours we landed at Auckland, obtained our luggage and some cash, and jumped in a taxi for the short journey to our accommodation.

On our summer tandem trip through Italy we relied heavily on AirBnB for accommodation, but this is the first time we’ve used it on this trip, our main motivation being the presence of a washing machine and a chance to catch up with four weeks-worth of laundry. We soon realised we had chosen well – the apartment, in a complex including the Heritage Hotel, sits on Hobson Street in Auckland’s Central Business District (CBD). It’s clean, bright and airy, and well-placed for getting around. Handily, it also has a rooftop pool. 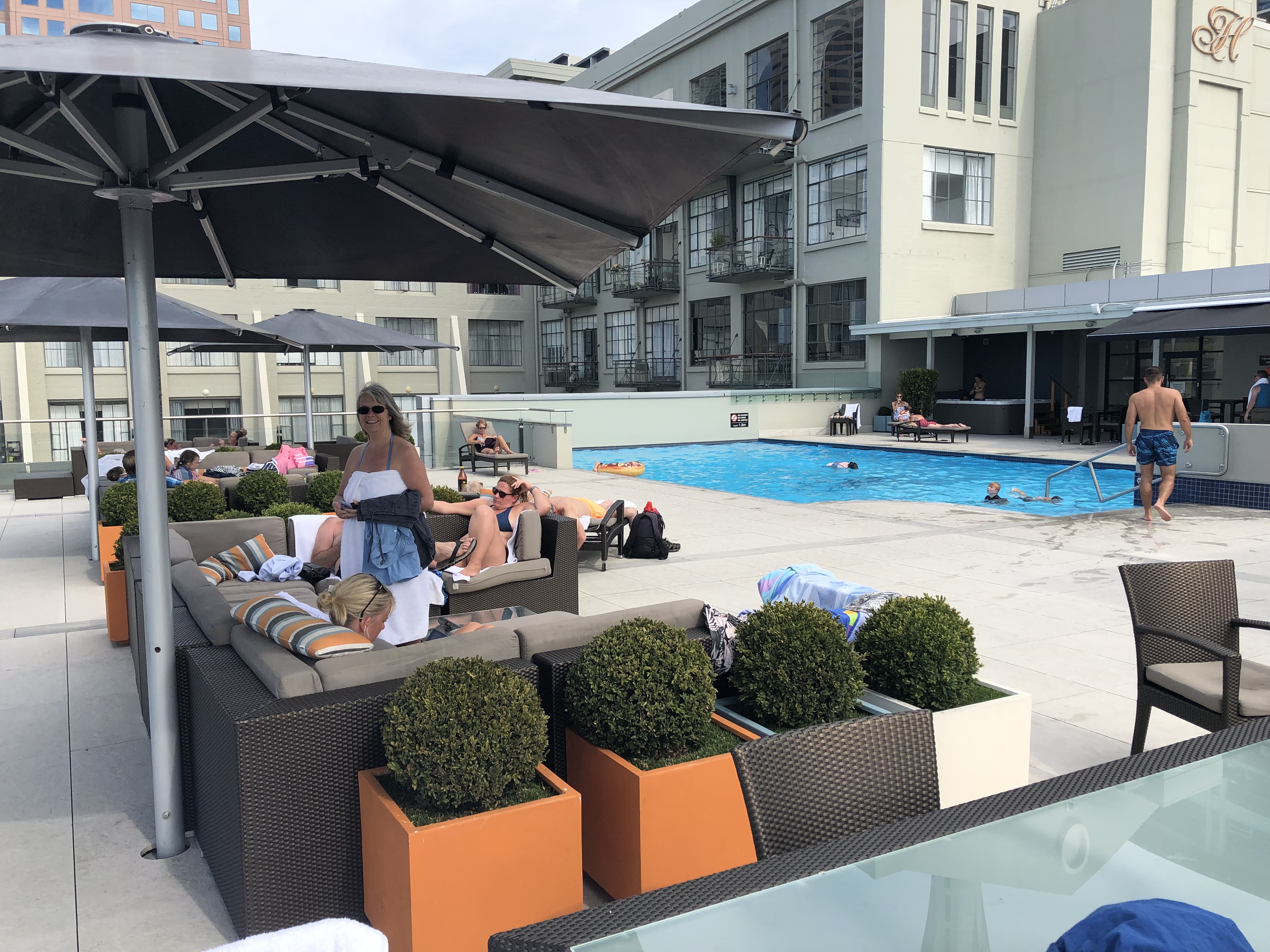 We’re also using AirBnB when returning to Auckland after our motorhome adventures, but staying in a different apartment then, in the Parnell district, for the sake of variety.

It was also an opportunity to reduce the pace a little – not wanting to miss anything in our previous stops we raced around somewhat, and as we will have almost a week in Auckland in total (across both our visits) we didn’t feel obliged to rush. So on arrival we unpacked, did some shopping at the nearest supermarket, and later I headed out to a nearby Mexican restaurant to grab a takeaway. Very good it was too, especially when washed down with a Seifried Pinot Noir.

Auckland is New Zealand’s biggest city, and hosts a third of the entire population. Other than in the CBD, though, it is not a high-density high-rise sort of place. There’s water in almost every direction, and a busy harbour full of ferries, yachts and the occasional cruise ship. On a fairly cloudy day we walked down to the quay and boarded a ferry to the Devonport area, just fifteen minutes away. We whiled away lunchtime in a small café/restaurant, enjoying the delightful change in accent – that of New Zealand sounds much more gentle than the Australian. After lunch, we walked up the steep slopes of Takarunga / Mount Victoria, a dormant volcano which dominates Devonport. 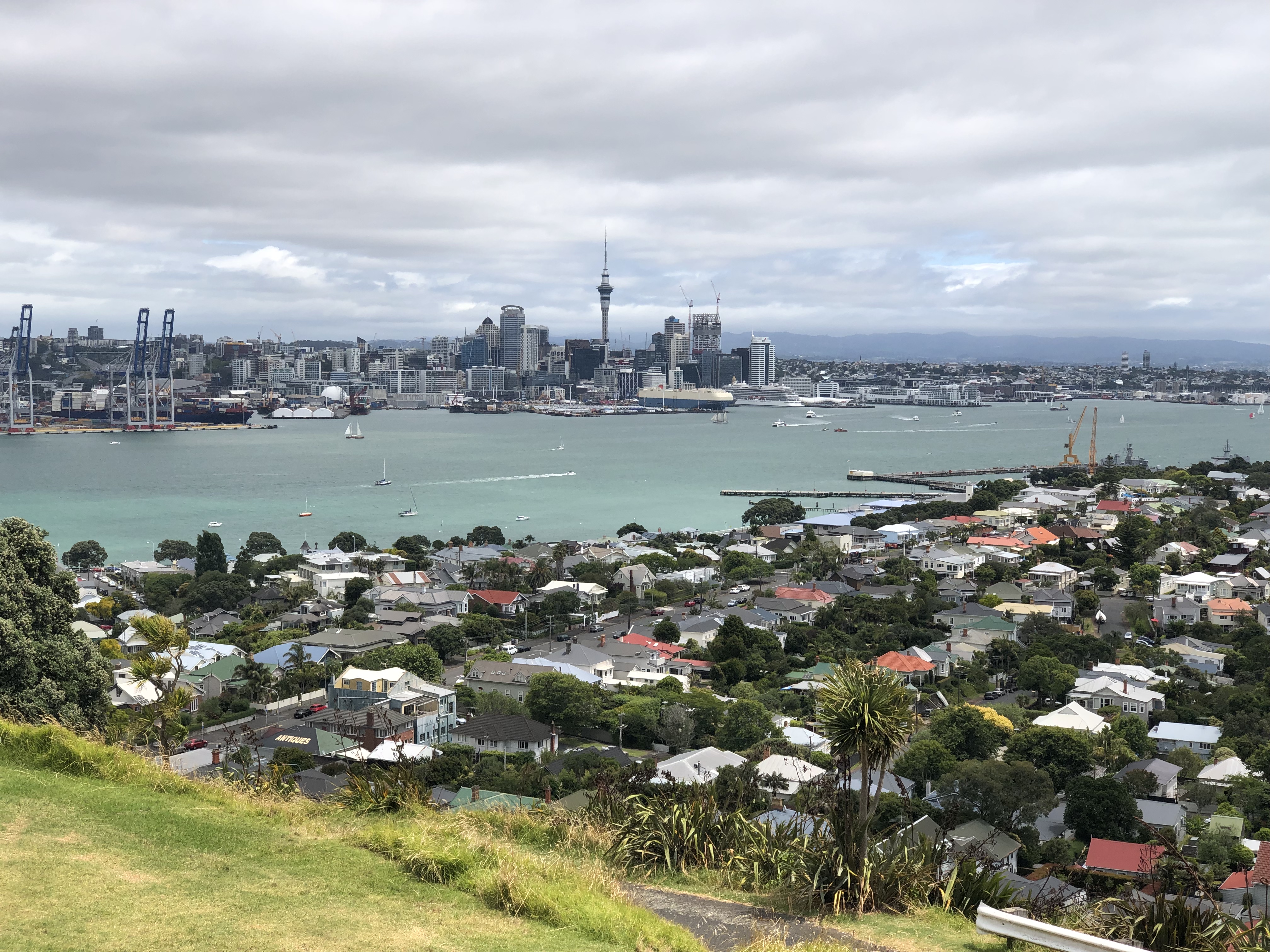 Undaunted, we reached the top, with no tremors underfoot, or smell of sulphur! There was a magnificent view in all directions, and we enjoyed watching the yachts scudding across the harbour in front of Auckland’s largest and most recently active volcano, Rangitoto (‘bloody sky’). 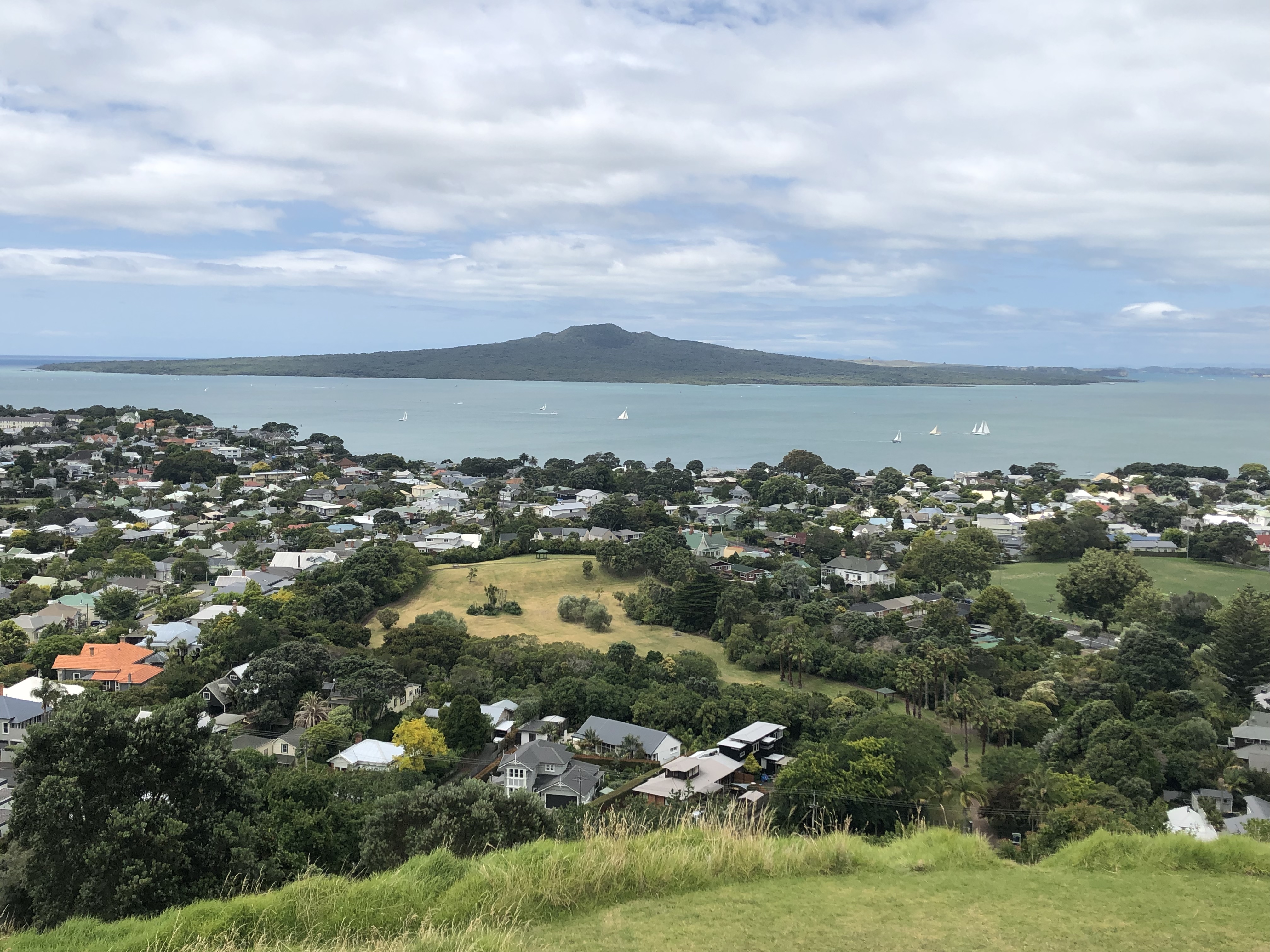 Our second day brought brighter skies, so we headed to the Domain. We had planned on an organised tour to Waiheke island, but should have been more organised ourselves – all seats were sold. We’ll try to rectify that on our return to the city. Anyway, back to the Domain – a beautiful green area looking down on the harbour, with Auckland’s War Memorial Museum sitting elegantly atop the hill. 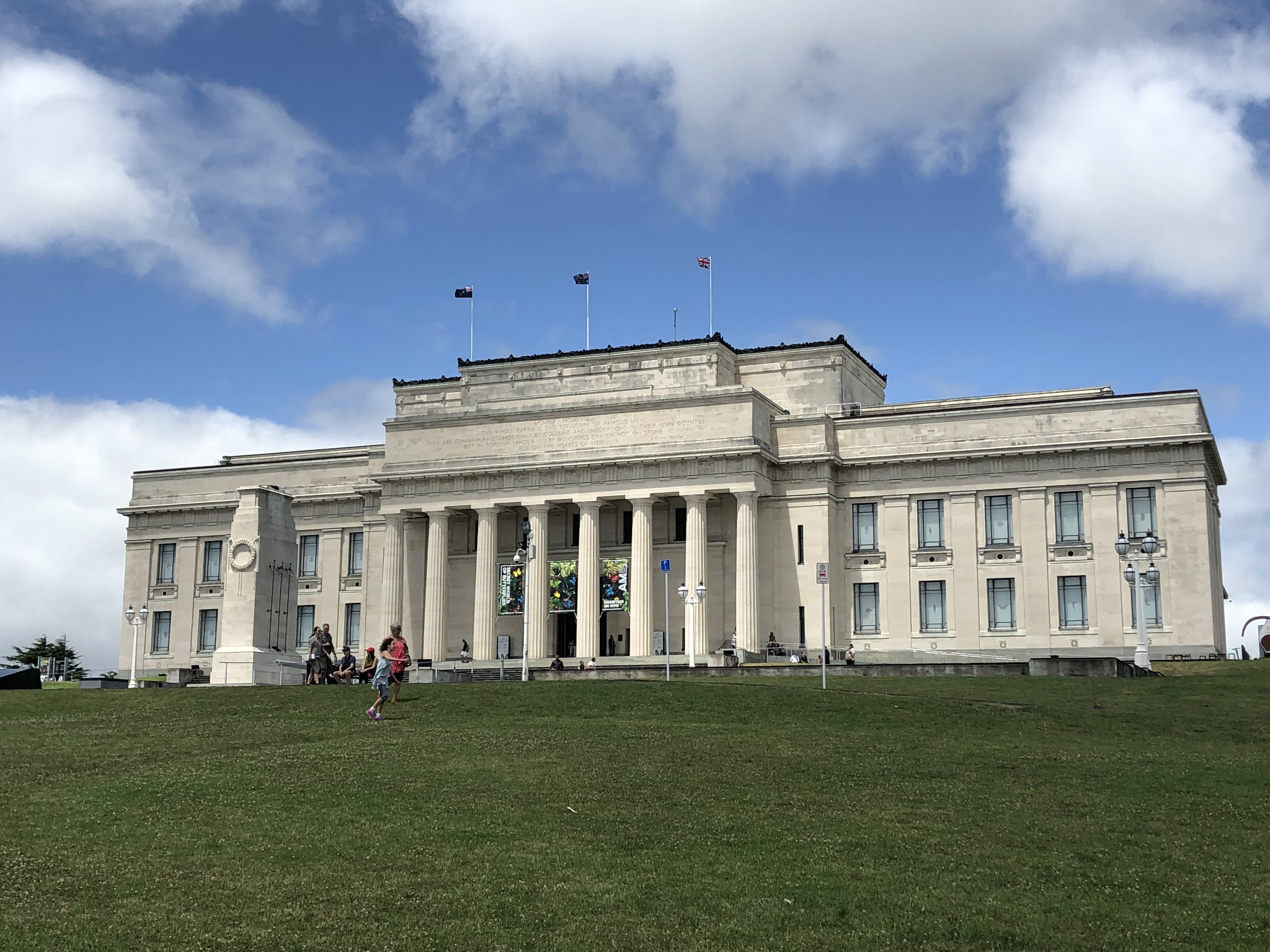 It was already late morning when we arrived (did I mention we were taking things more slowly here!) so we lunched in the Winter Gardens Café, surrounded by lush greenery and looking over a pretty lake, before making our way back up the hill to the museum. 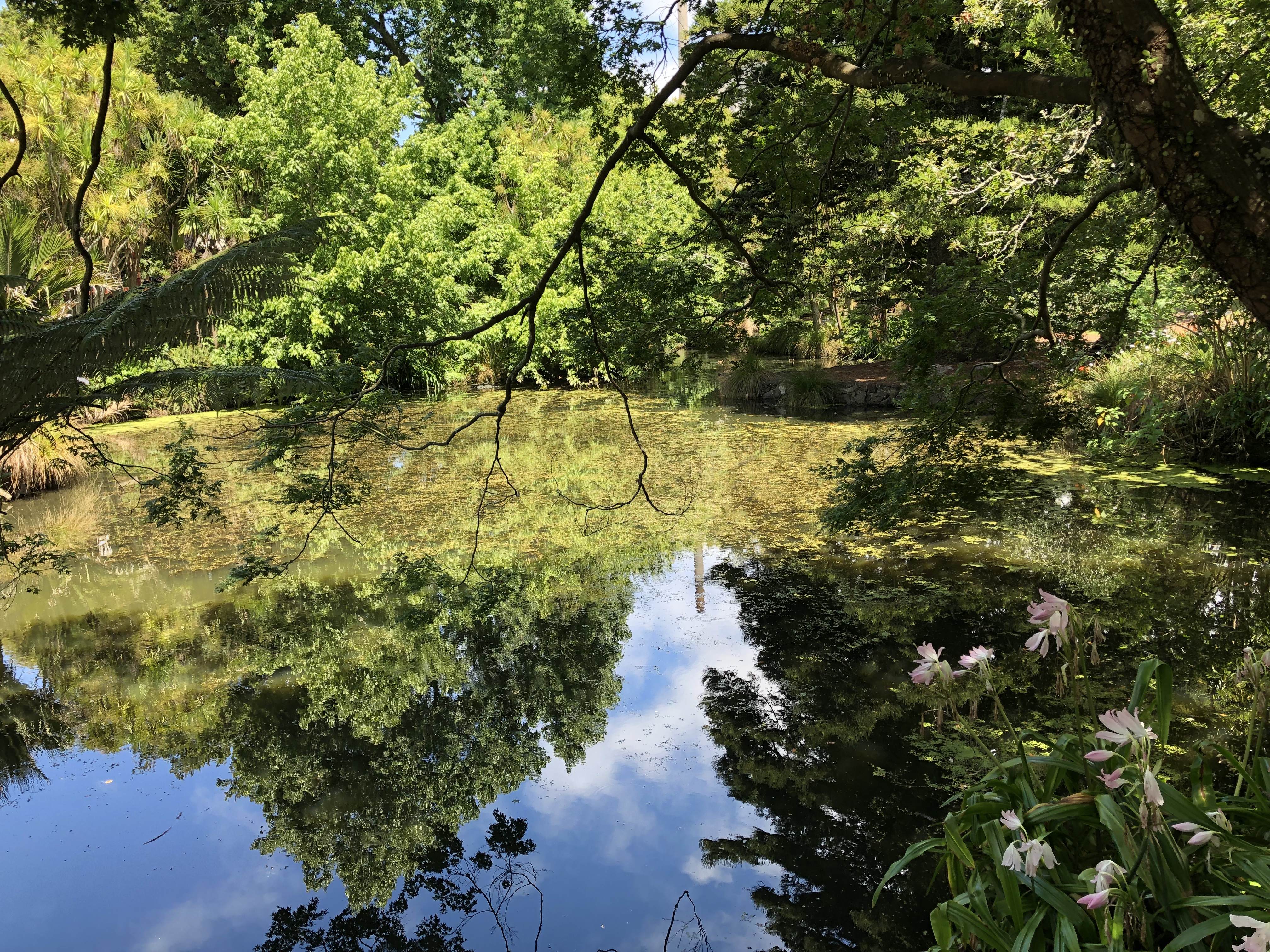 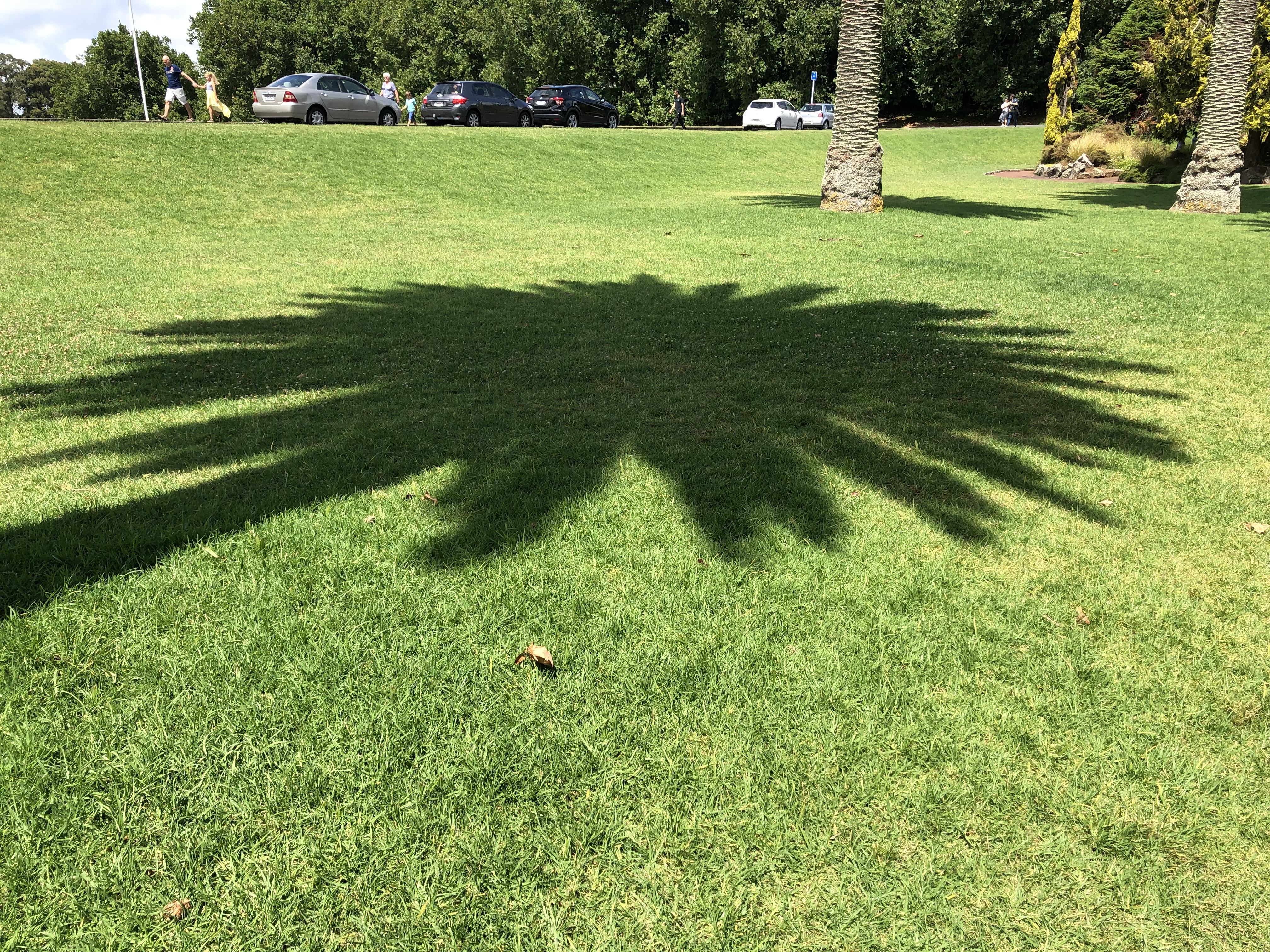 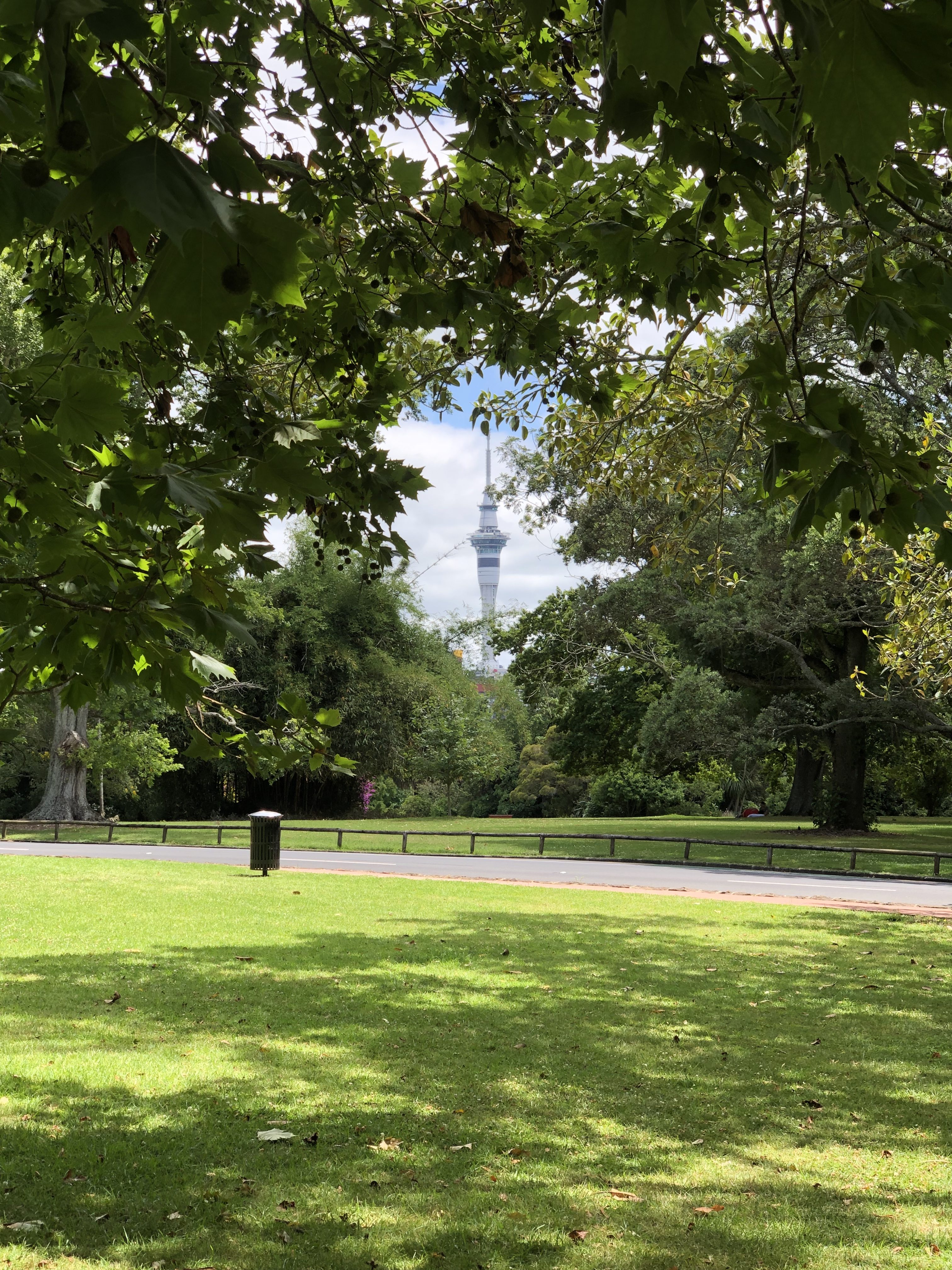 Now it’s fair to say that thus far our knowledge of Māori history and traditions is somewhat lacking, though we’ve read a few guidebooks. So the ground floor of the museum was particularly fascinating as an introduction to the subject. In particular it charted the various migrations which resulted in the arrival of the Māoris in Aotearoa. This is the Māori name for these islands, meaning “long white cloud”. What struck us particularly was the Māori Pou, which share many feature with the totem poles we saw on our last visit to Vancouver. On researching it further it seems that many others have attempted to establish a connection between the two cultures because of their cultural similarities, but no direct links have yet been accepted. Anyway, here’s a chance to judge for yourself – the two images on the left below were taken in Vancouver’s Museum of Anthropology, the one on the right in Auckland Museum. 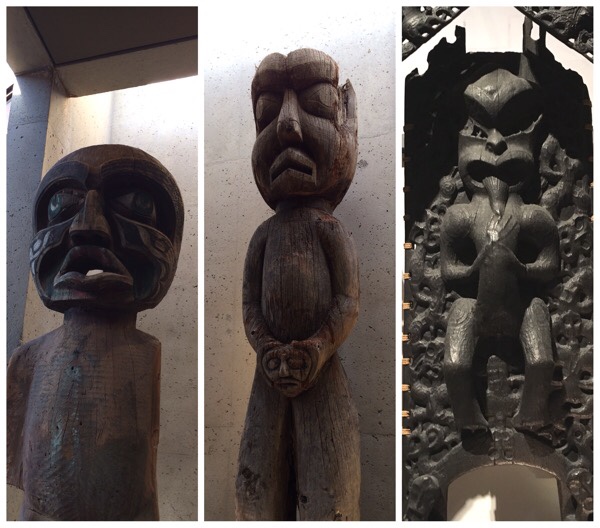 It was a fascinating introduction, and we also enjoyed the natural history section very much – well, it was mainly about volcanoes, which are a fascinating subject!

On our last day we braved the Sky Tower. This concrete tower, only a short walk from our apartment, is taller than the Eiffel Tower, if slightly less elegant (sorry, Aucklanders). As we approached we could see the occasional body hurtling down from the Sky Deck to ground level in a bungee jump. 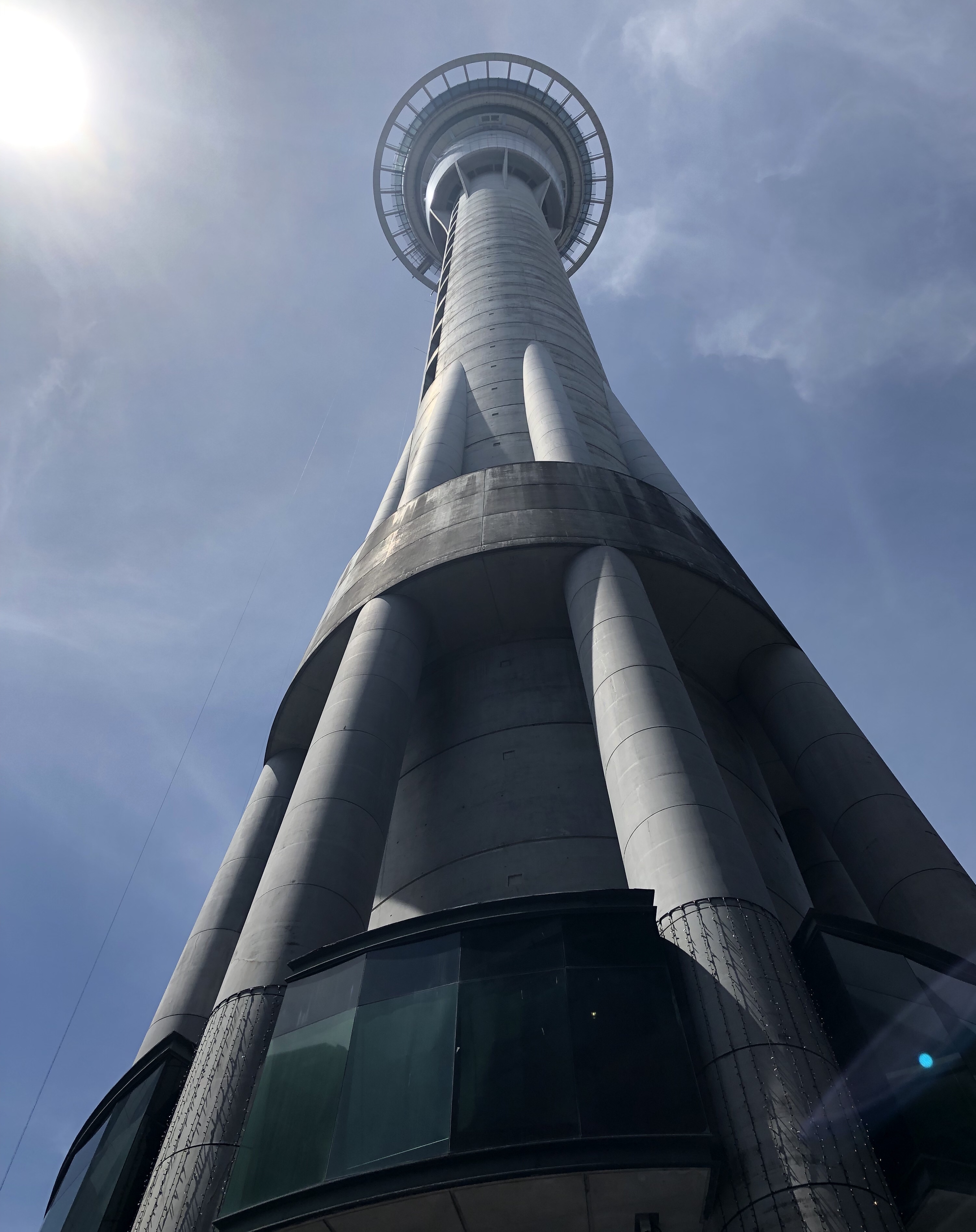 It will not surprise you to learn that neither of us was even slightly tempted by that option. We did go up the lift, the bottom of which was partly made of glass. 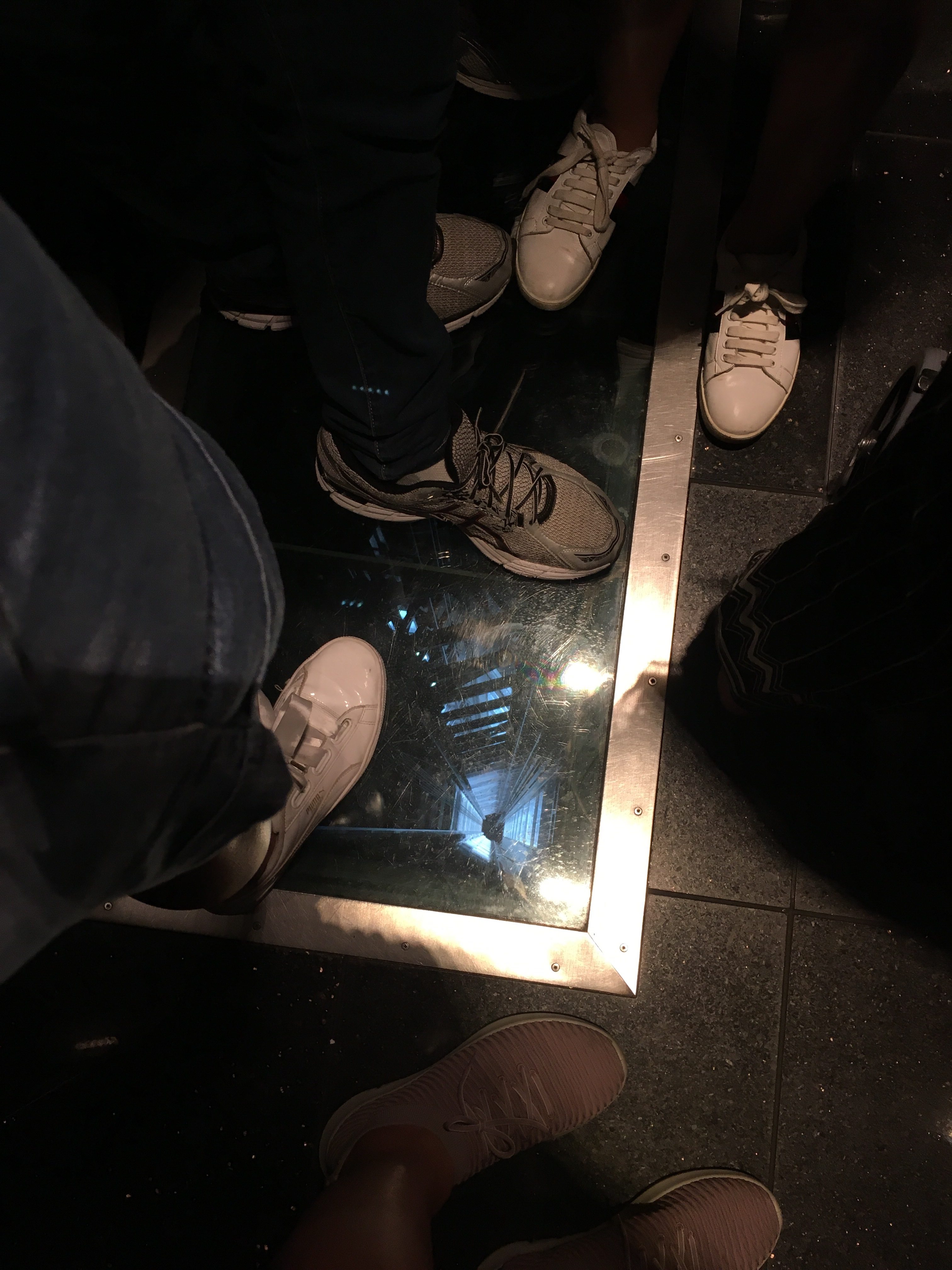 Fifty-two stories later we emerged on the Observation deck, and after wandering around there for a while (and avoiding further glass floor sections) went to find the lift to take us up the last 30m to the Sky Deck, at a dizzying 220m. So dizzying, in fact, that a man coming back down in the lift emerged with a nosebleed!

We were unfazed by this, and it was worth it. The views were extensive, of course. Our pictures probably fail to do justice to the subject, as the glass of the towers lends a slightly blue cast to everything. We did have fine views over the domain and the harbour… 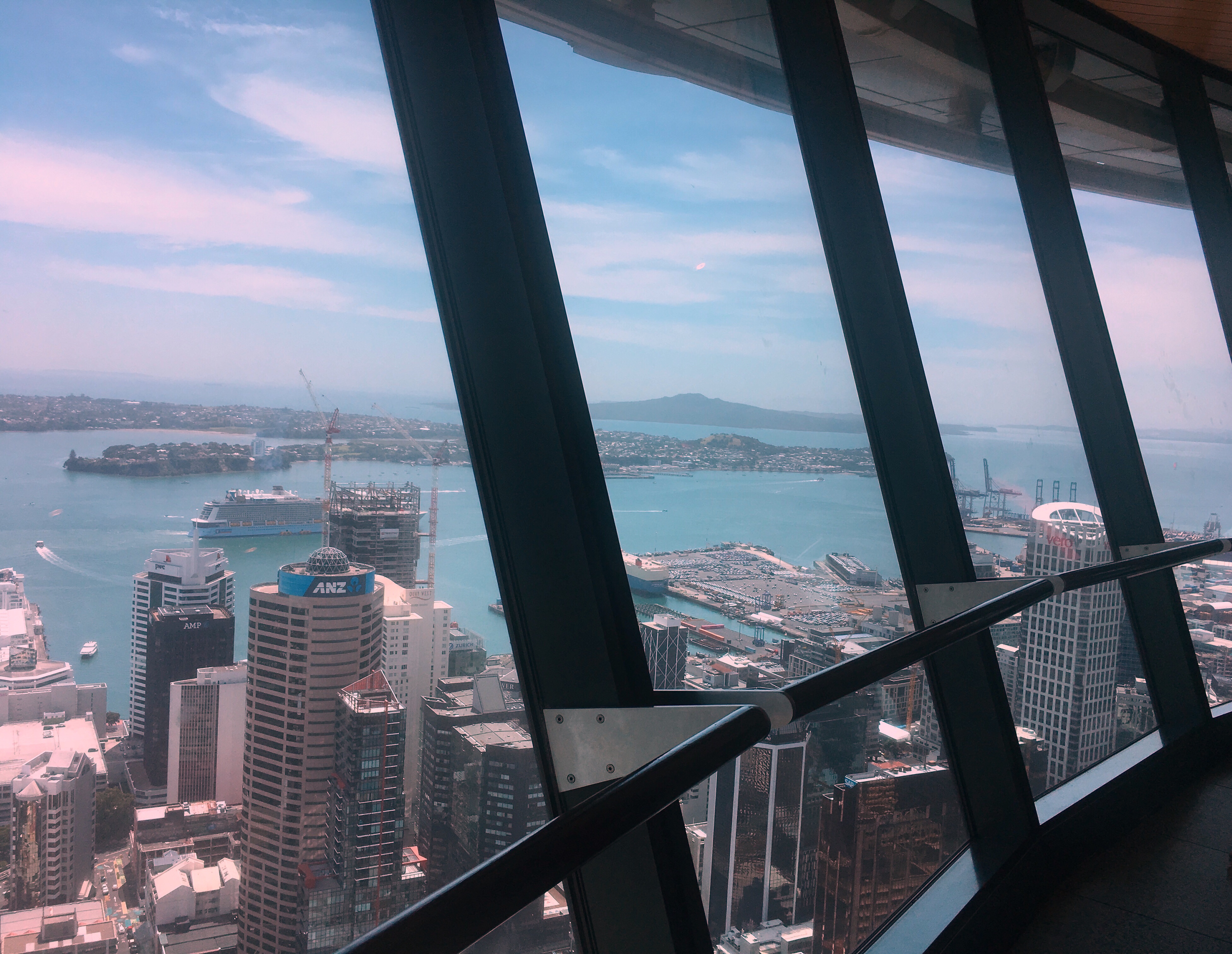 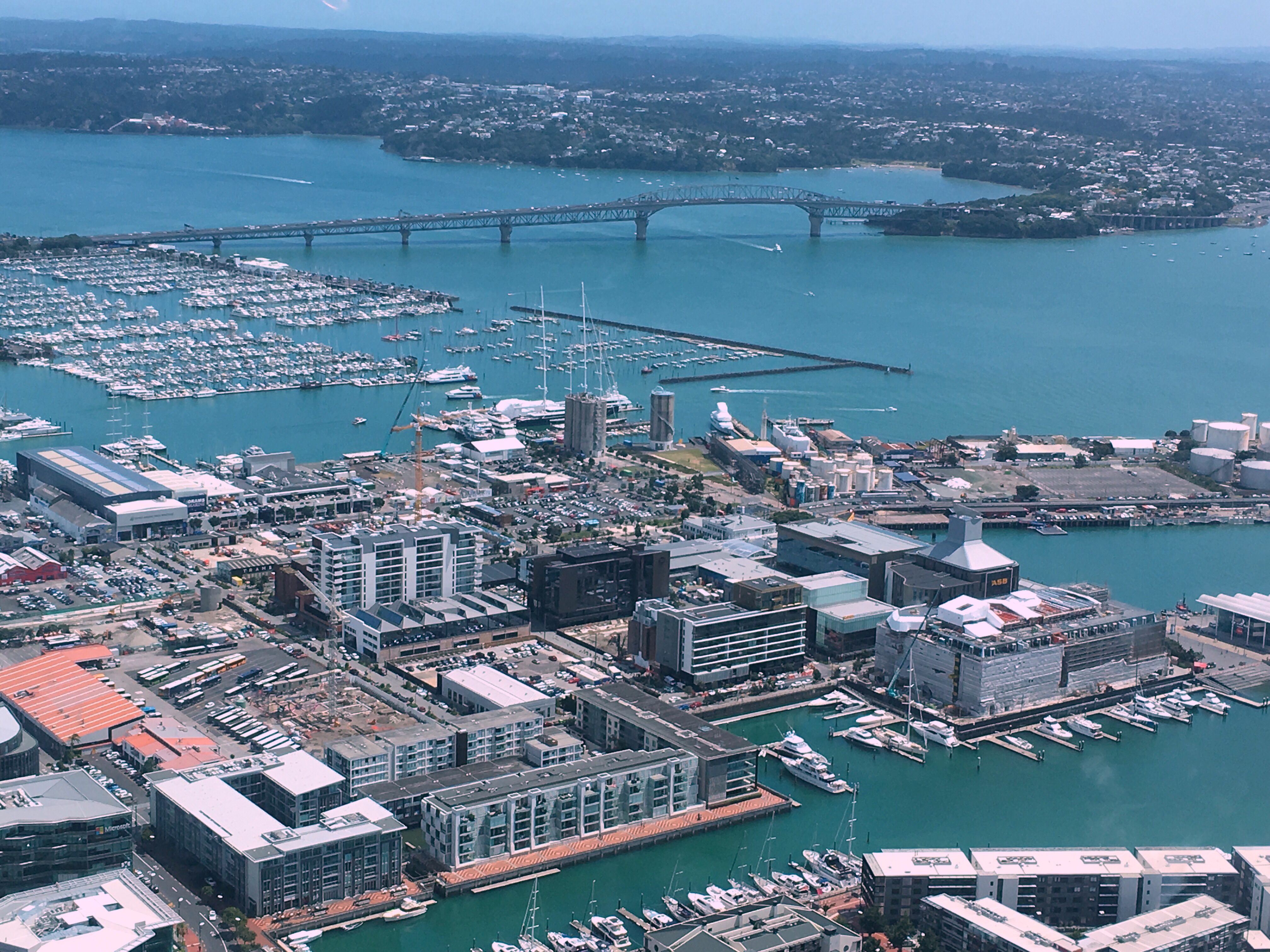 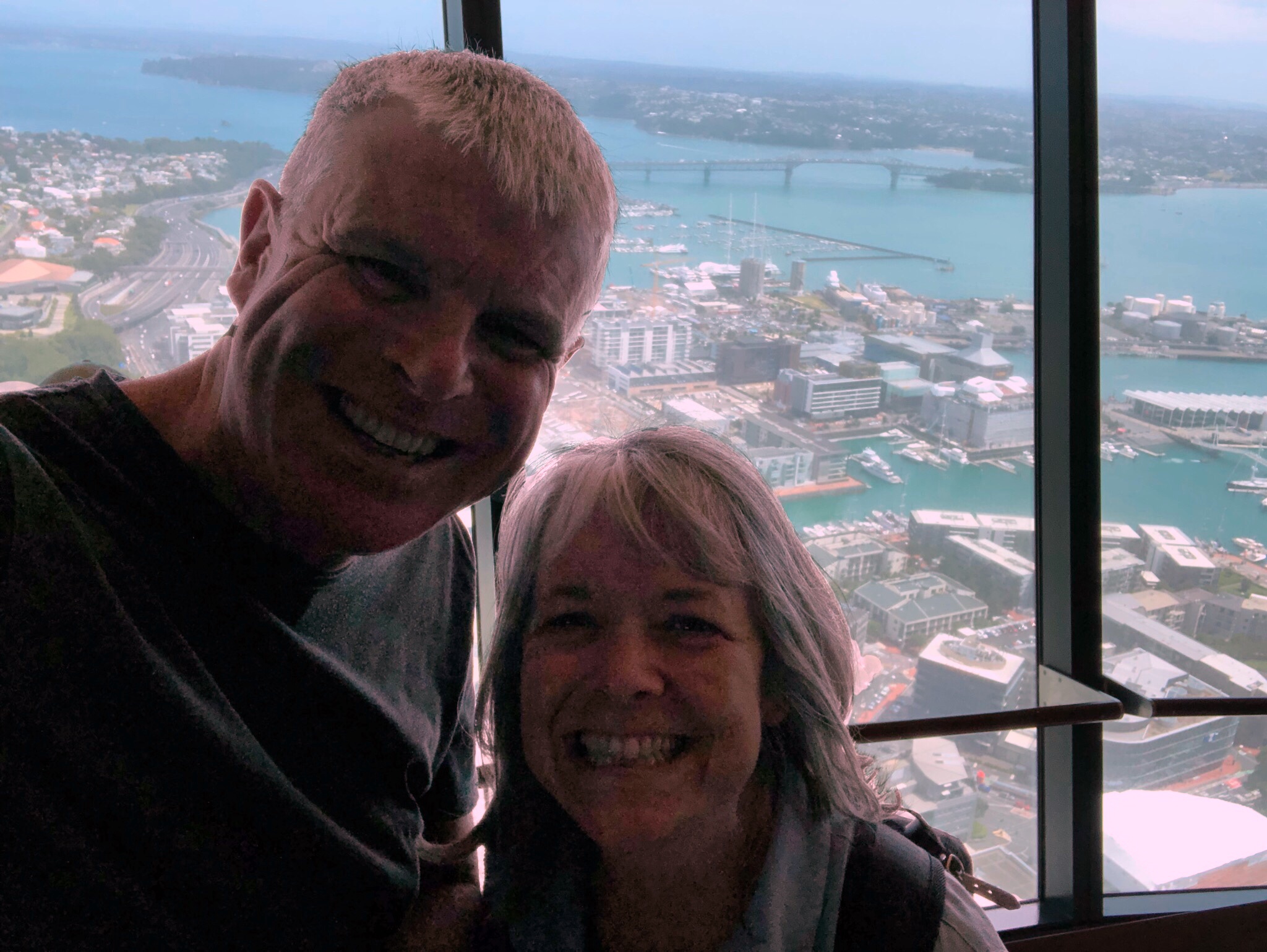 …and of an adrenaline junkie plummeting earthwards. 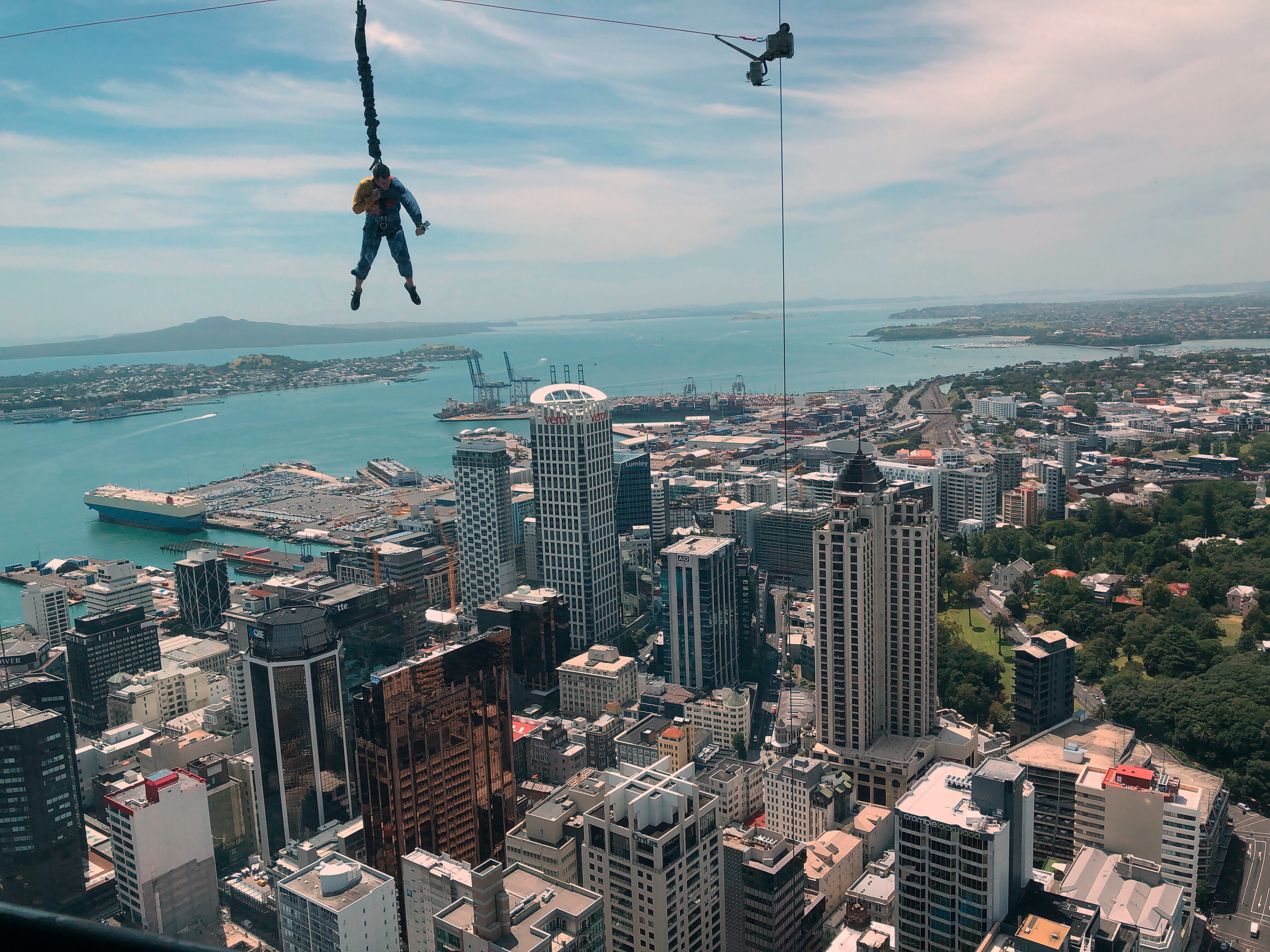 We’re told there are many more opportunities, particularly in Queenstown, for similarly reckless activities. Reader, we shall enjoy these vicariously.

Tomorrow we leave Auckland. Firstly we must head towards the airport, in order to collect our rented motorhome. Over the next several weeks we have planned to cover both islands in a figure-of-eight pattern. Initially we intend to strike out in a northerly direction towards Whangerei.