We’d planned to cater for ourselves at Falerna Marina and eat in the little peaceful garden of our lovely annexe, but it being Sunday, we’d unfortunately missed the supermarket. Our hosts recommended a restaurant on the lungomare, so we headed down in the early evening and had a good dinner, sitting on a terrace overlooking the sea.

This morning we set off, a little creaky perhaps, our ‘seventh day in a row’ legs ready for the upcoming rest period. Down to the lungomare, under the autostrada, and back onto the SS18, we were soon up to full speed and cruising along the straight, flat road. 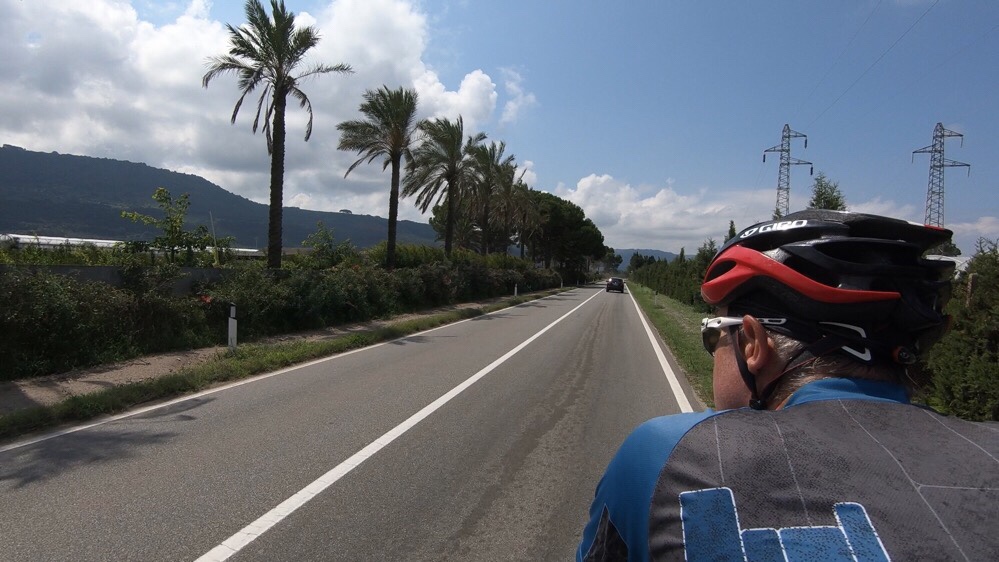 There wasn’t a great deal to look at to begin with, but we were making good progress, and enjoying the knowledge that we’d be revisiting some old haunts today, Pizzò for lunch, and then Tropea for a couple of days rest. We passed a few fields of lime trees, absolutely loaded with fruit. 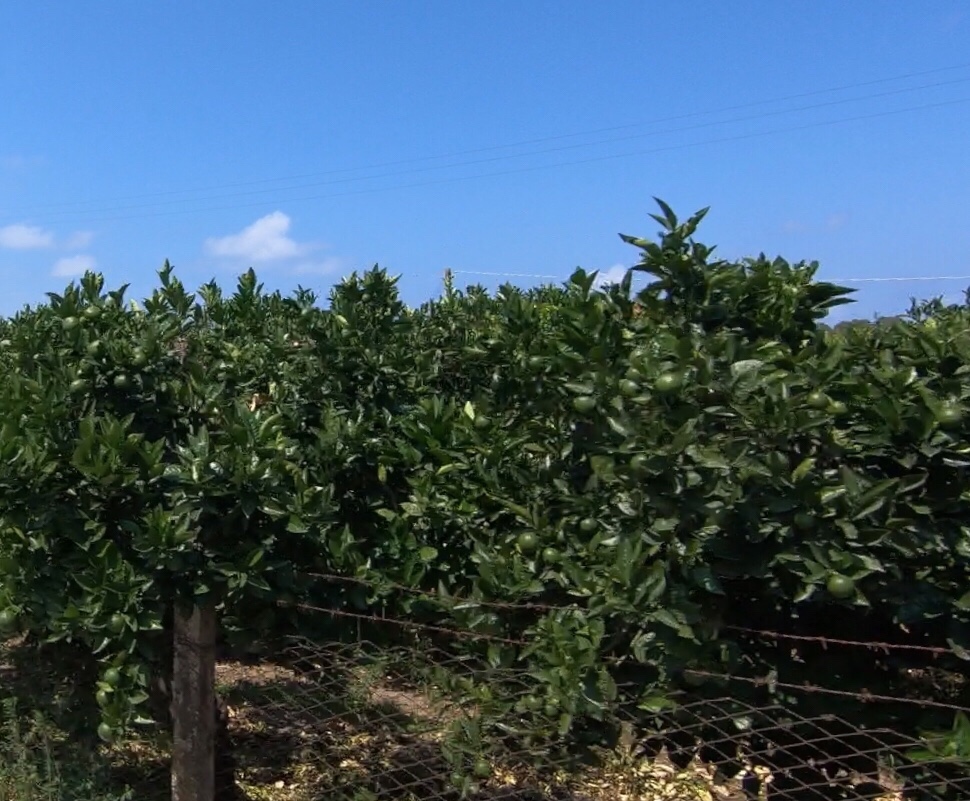 We even managed to trigger a speed gun, which was quite satisfying! 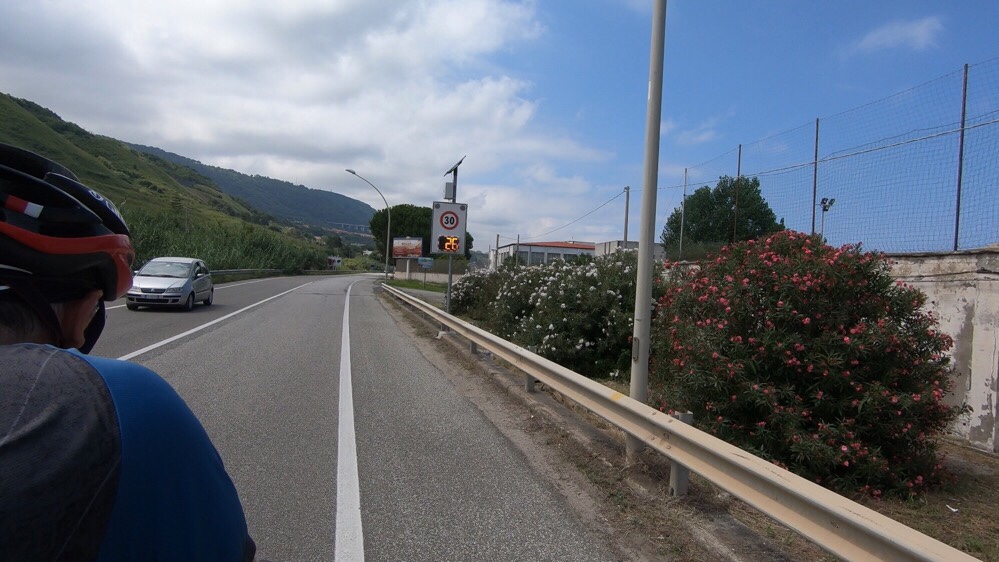 Mostly, though, we just pedalled along, in a good rhythm, clocking up the kilometres. Pizzò appeared up ahead, and it was up, a short climb but a good place to break for lunch. 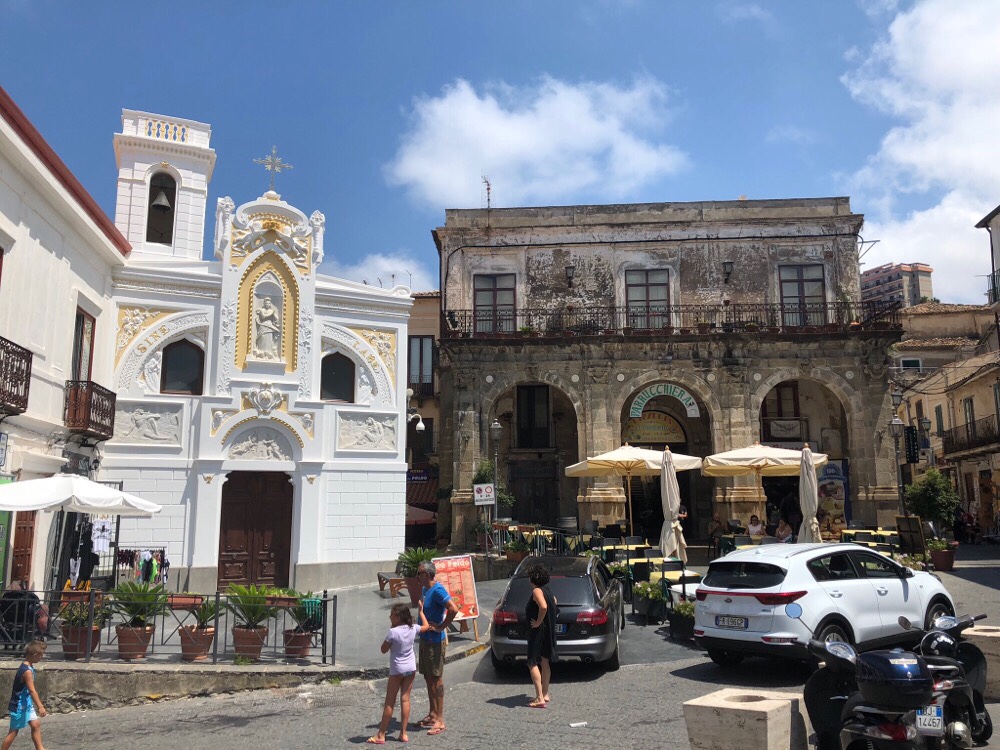 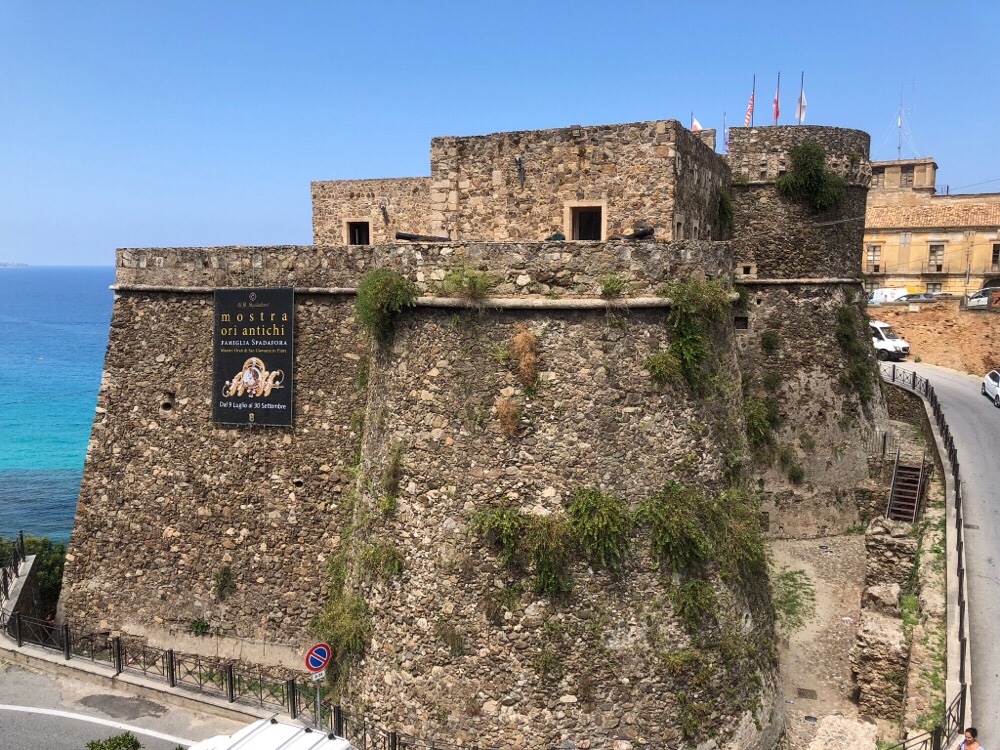 Pizzò is famous for its ‘tartufo’ ice cream, a wicked spherical concoction of ice cream around a liquid chocolate centre, dusted in cocoa powder. If ever there was a good day to eat one, surely a near seventy kilometre bike ride would qualify?! We needed carbs first, though, and found a café serving various savoury items, more difficult than you might think to locate, actually, practically every café in the main square served only tartufo in various forms. 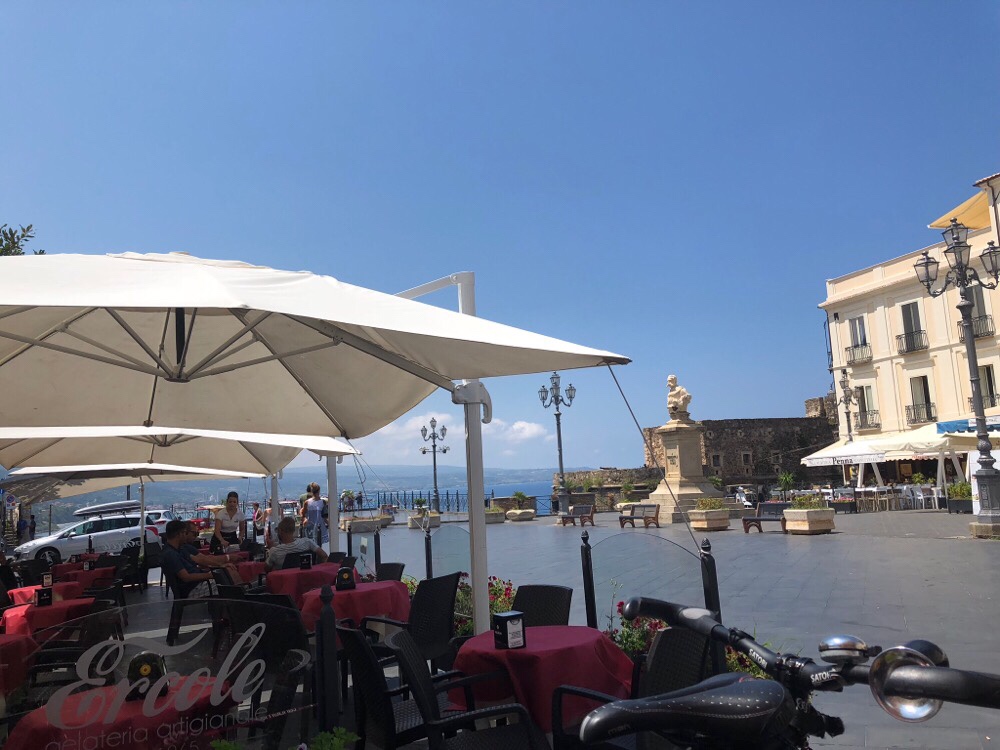 Unfortunately, despite our best intentions, we were just too full after a panino for the Captain and an arancino for the Stoker to contemplate a tartufo. This heat plus all the exercise doesn’t half deplete the appetite for some reason… Never fear, though, we will knuckle down and make sure to have one in Tropea.

As we headed down out of Pizzò we could see Tropea in the distance, a rather hazy headland, the third of three. In fact we’d seen it last night from the restaurant in Falerna Marina, when it looked even further away and even more hazy. The afternoon was much more strenuous than our fast, flat morning, up and down we rode, and each time we crested a rise, the headland of Tropea was just that little bit closer. 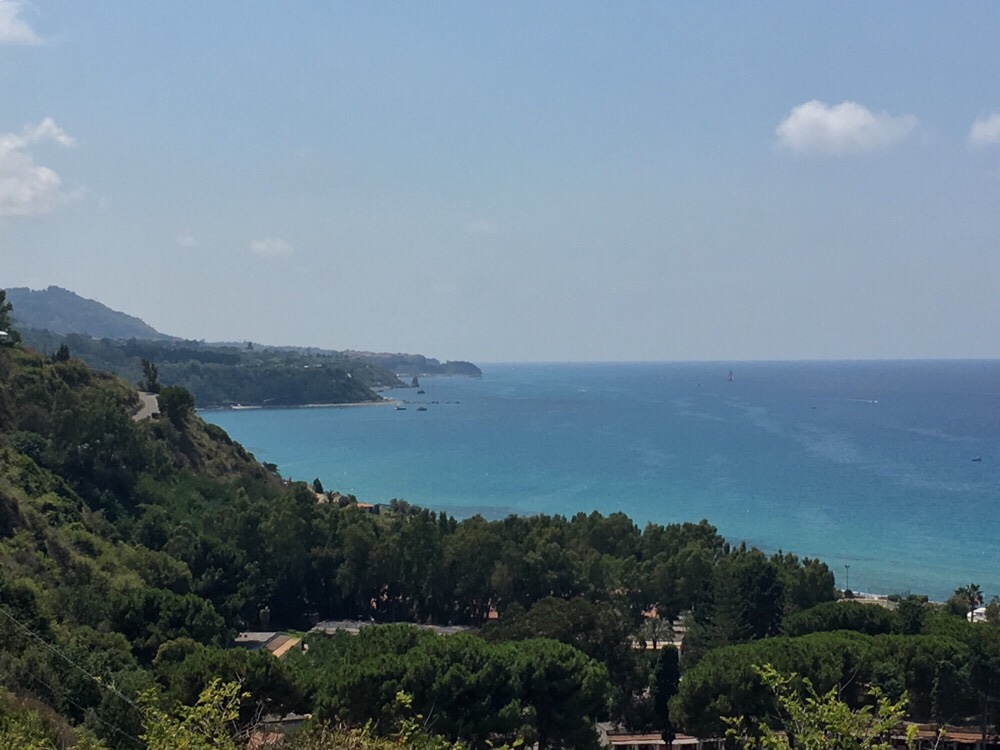 The sea is an extraordinary colour here, a bright azure blue that the pictures just don’t quite capture. It’s so blue that someone familiar with Spinal Tap might ask “how much more blue could it be”, and conclude that the answer could only be “none more blue”.

Along the side of the road we saw lots of fruit and vegetable stalls. That’s been a constant feature of the trip so far, but the produce has changed enormously as we’ve come south. Initially there would be apples, plums, courgettes, tomatoes, then there was a period of enormous watermelons. We knew we were properly in the south when we started to see strings of chillis, and then nearing Tropea clusters of the sweet red onions it’s known for. 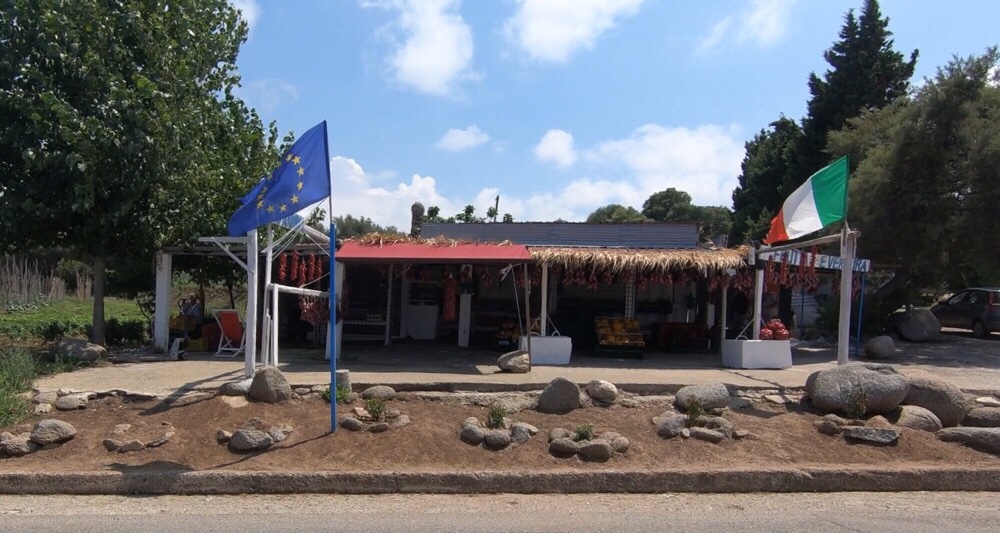 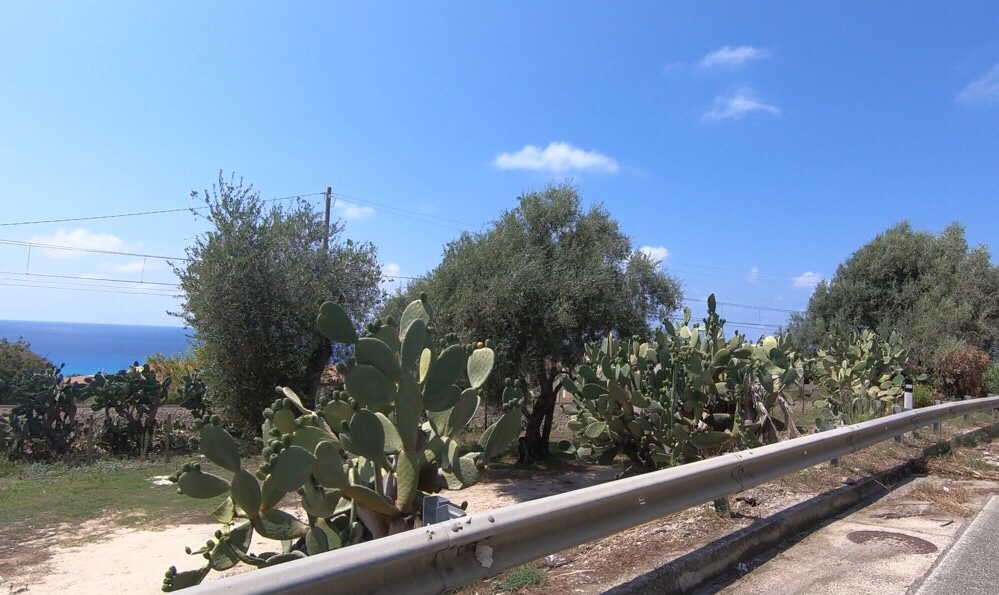 They are very odd-looking things. The little fruits on the edges of the lobes are edible, apparently, and in fact one of the apartments we’ve found for our onward journey from here has a host who often supplies them for her guests’ breakfasts. I hope she explains what to do with them!

We rode into town, and were stunned anew by the view from the little square in Tropea, over to the Santuario di Santa Maria dell’Isola. 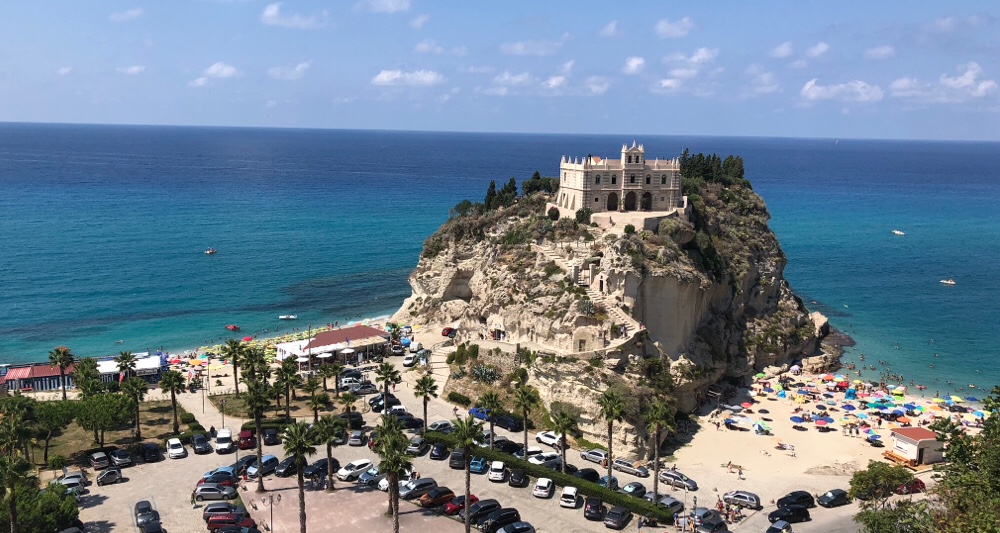 Imagine our surprise when our hotel room turned out to have exactly that view! It’s very new, this hotel, and run by an enthusiastic young couple who visibly relaxed on learning that they could talk to us in Italian! We’ll stay for three nights, setting off again on Tuesday with just two days’ riding to the ferry for Sicily. It’s starting to feel really close now! 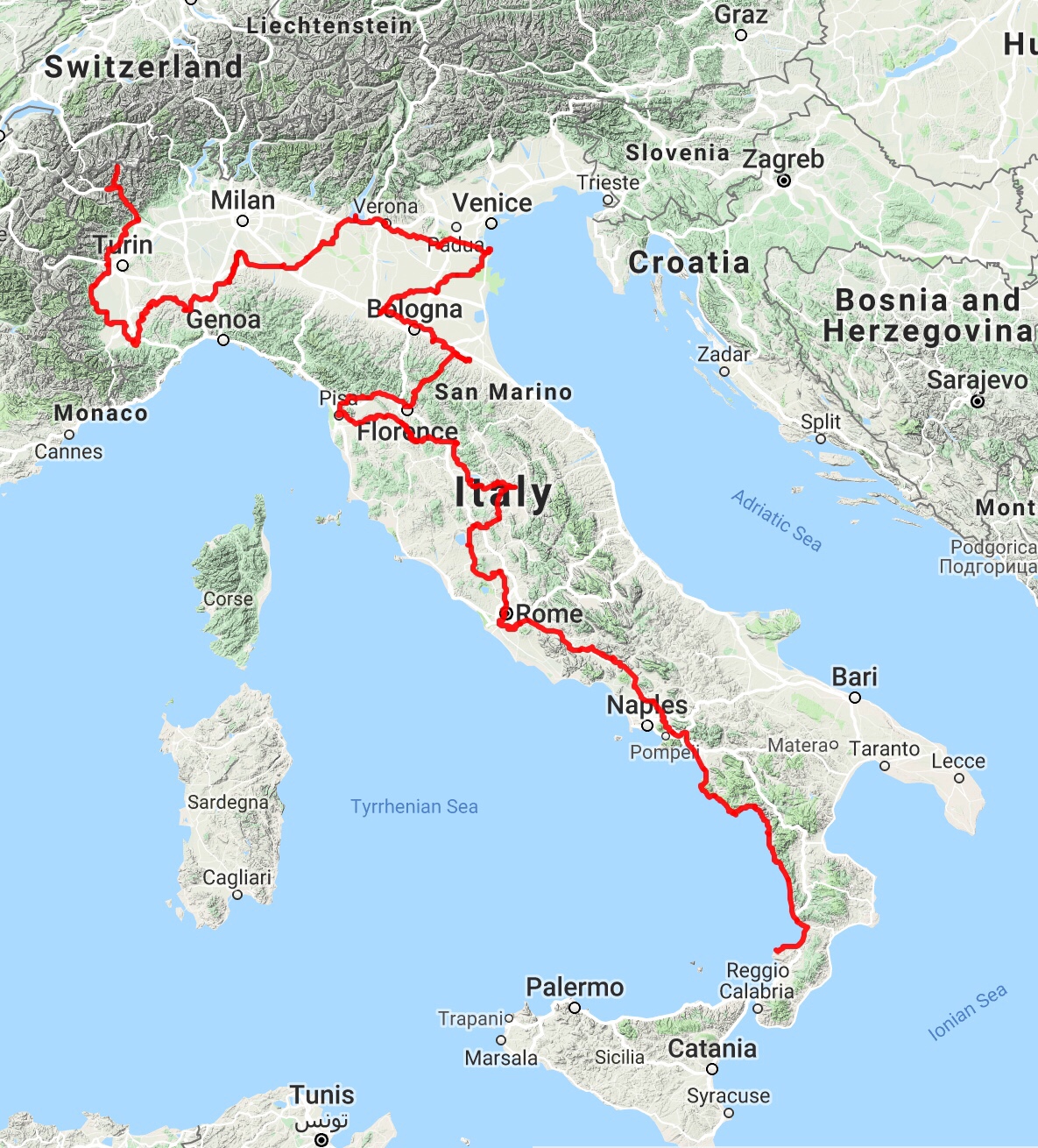