a relaxed breakfast — a morning’s cycling — the Ieper canal — spires on the horizon — is the car still there?
We found the sea last night, following the road named Zeelaan, then Zeedijk, the clue perhaps being in the name… It was phenomenally windy, a gale blowing in off the sea, but the beach looked very nice in the early evening sun, white sand and little blue and white beach huts everywhere. We ate pizza in a not very Italian Italian (called ‘Milord’, strangely), and were blown back to our hotel in the Markt for a good night’s sleep. No idea why it wasn’t a Grote Markt, it was perfectly Grote… Maybe there was an even Grote-r one elsewhere.

Breakfast was a relaxed affair this morning, in the knowledge that we had only around 45km to cover back to Ieper and the car (“if it’s still there!”, we said, only about 90% in jest), and we watched the cafe owners around the setting up their terraces for the day. After a final packing of the panniers, and an exit down Zeelaan in an ‘away from the sea’ direction, we were on our way.

There was definitely a more languid air to our pedalling today. Starting a day as we did yesterday with 110km on the clock to complete brings a certain mental challenge, along with the physical task of completing the mileage (kilometrage?). Today would be just a morning’s cycling, though, and we breezed through the countryside in the sunshine, knowing that we’d have no trouble making Ieper for lunch. We must be tour-hardened now, because we were bowling along at over 20kph without even trying!

With de Panne quickly behind us, we passed the curiously named ‘Plopsaland’ theme park, and then joined the canal for a while. Turning briefly away from the water, we skirted Diksmuide, then arrived at Knokke to find the lifting bridge across the canal just lowering back into place after letting a boat through. There was a little picnic area just over the other side, and we sat for a little while having a drink and watching all the Fietsers coming and going. There was a lady from a German holiday company’s camper van, preparing lunch for a group who hadn’t yet arrived, and a little hut with information about the fort which used to stand on the spot. It was all very pleasant, and we even got to watch the lifting bridge go through its routine again, to let another boat through.

We set off again, just 16km to go, following the Ieper canal now. The German party passed us heading for Knokke a few kilometres later, but we didn’t tell them their lunch wasn’t ready yet. The canal track was lovely, except for a short section where the roots of the trees next to the track had intermittently distorted the surface. It was a little bumpy, and the tandem is so long that when we go over the bumps we sound like a train going over the points..

We started to see spires appearing on the horizon, and cycled through Ieper’s industrial outskirts, and then suddenly, there was the distinctive grey spire of the Cloth Hall, practically in front of us. Two more turns and we were there, Ieper’s Grote Markt. 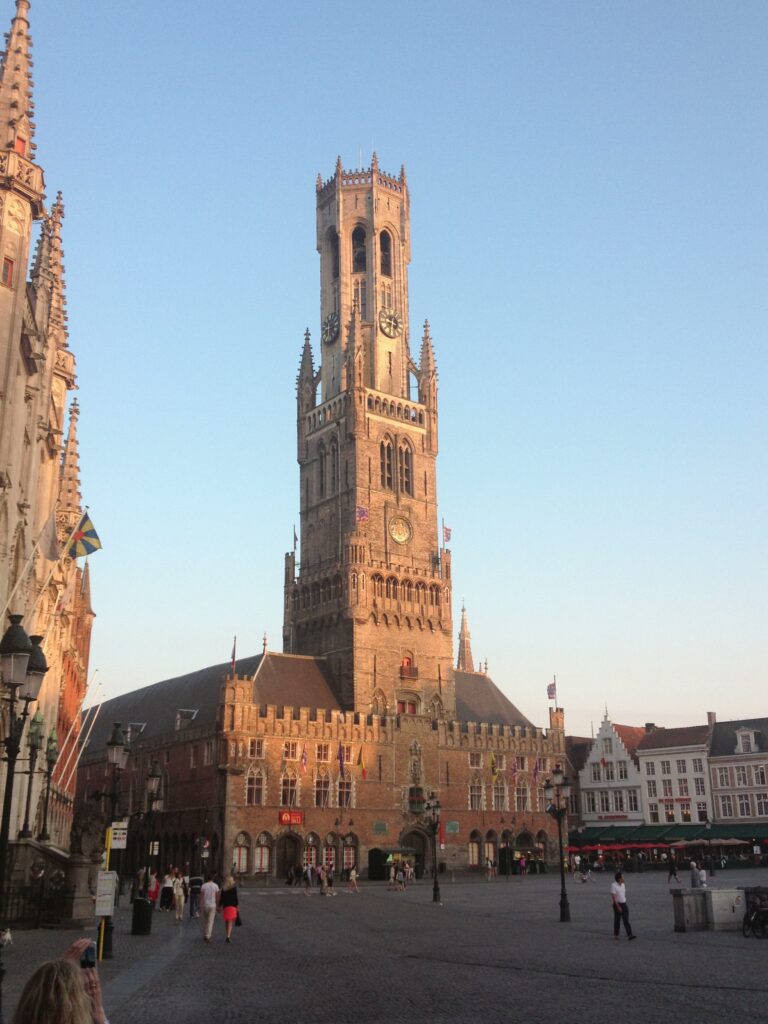 We had a small but delicious lunch in the square (no excuse for stuffing ourselves, with no more kilometres to cycle!), then it was back on the bike, and a short ride to the car. We passed the restaurant where we ate on our first night, then popped out of the trees, crossed the road, and rode into the car park.

“Is it still there?”

So that was that, the end of our tour. It had been brilliant fun, we’d learned a lot about Belgium, met some lovely people and cycled through beautiful countryside, mostly in the sunshine.

We’ll record some reflections later, but for now, it’s a couple of days recuperating in Brugge/Bruges, and then home.