We walked the best part of a kilometre up the road towards the centre of Le Neubourg last night to eat at “La Table de Tom”. Clearly a popular place, it was virtually booked up, but as we were early they squeezed us in. We enjoyed our meal, the most notable part of which was an enormous Tartiflette, which defeated the Captain, a notorious trencherman…

So on to our final half day, just twenty-six miles to Rouen. We negotiated the centre of Le Neubourg and emerged onto a high plateau in predominantly sunny weather. Here we powered along, surrounded by wheat, corn and flax, using our (now seasoned) cycling legs to good effect. We anticipated only a couple of climbs today: one, a short “blip” duly arrived but barely troubled us. After a while though we started to descend into a steep river valley, enjoying the momentum of the tandem, but always cognisant that a valley has two sides.

Sure enough the floor of the valley loomed, and after it, our second serious climb of the day. We set off, accompanied by tooted encouragement from passing cars, on a long steady climb. It was fine – a gradient of perhaps 8 percent, but quite long. The road was quiet though, and the climb was soon achieved before a second long descent towards the boucles of the Seine. Indeed we could see the meanders we negotiated last Saturday on our way out of Rouen towards Jumièges.

By now we were in the land of industrial estates and factories- not Rouen’s most attractive facet, it has to be said. We took advantage of all the cycle lanes we could find in a tortuous entry into the city, finally crossing the Seine onto Rue de la République, commissioned by Napoleon, and providing us with a direct route towards our final stop at the car park where we left our car a week ago.

We dismounted, embraced (as is traditional!) and set about dismantling the tandem into smaller pieces which would fit into the car. This we achieved quite efficiently allowing us plenty of time to check into the Hotel, grab a quick shower and then head for a long leisurely lunch in a sunny square, accompanied by a bottle of Bourgogne Aligoté. We discussed, briefly, whether our morning’s effort was sufficient to allow for the consumption of a final salty caramel ice-cream – you can guess the result.

Just enough time, then, to take the petit train around the streets of Rouen – always the best way to become familiar with a new French destination. It’s a glorious city, chock-full of scenic squares, narrow alleyways, half-timbered buildings and tourists, lots of tourists (including us, of course). 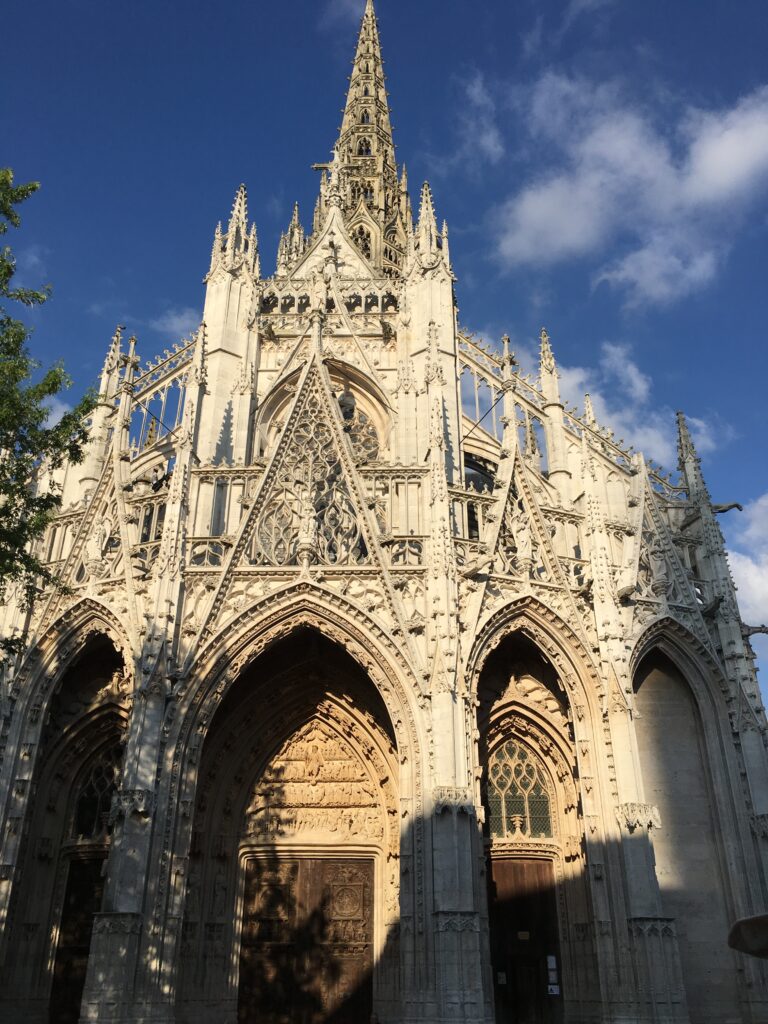 So that’s it. Our journey is done – all that remains is to spend a final evening in Rouen, grab a final croissant for breakfast and head for the Channel Tunnel in the morning.

…on which subject. It has to be said that this has been a bitter-sweet trip. All of the “sweet” part has been down to France and the French. The welcome we’ve received has been as warm as ever. The drivers were accommodating, the hoteliers welcoming, the restaurateurs provided fantastic food and wine. Normandy is spectacularly lovely. The “bitter” part of the equation comes from knowing that we and our countrymen will have to live for decades with the crassly stupid decision we took last week to leave the EU. It has to be said that many of our compatriots (particularly the elderly, sadly) voted with their prejudices instead of their intellects. This was the inevitable product of the demonisation of Europe conducted for years by the British media, in pursuit of their own narrow interests, and of the juvenile infighting between Old Etonians prepared to sell the country down the river in pursuit of the role of Prime Minister. They lied. They all lied, and now we face the consequences. Shame on us.

Nevertheless we shall return. A trip down the Loire, perhaps, or, even sooner than that, a circuit around Les Pays-Bas. Not forgetting, of course, our longer term plan for a “top-to-toe” journey down Italy. Can’t wait!