After the excitement of all the day’s sightseeing and a simple dinner of prawn risotto last night, we had an early night with the intention of of reasonably early start today.

Our plan was for more sightseeing today, including the château at Chenonceau, one of the most famous of the Loire châteaux. First, though, a quick detour to see the pagoda at Chanteloup, as spotted yesterday from the château at Amboise. We set off on the road, away from the Loire, and it was very strange to be amongst traffic again, albeit very light. It was warm and sunny, and we rode pretty efficiently up a hill (yes, an actual hill!) onto the plateau where the pagoda is situated. 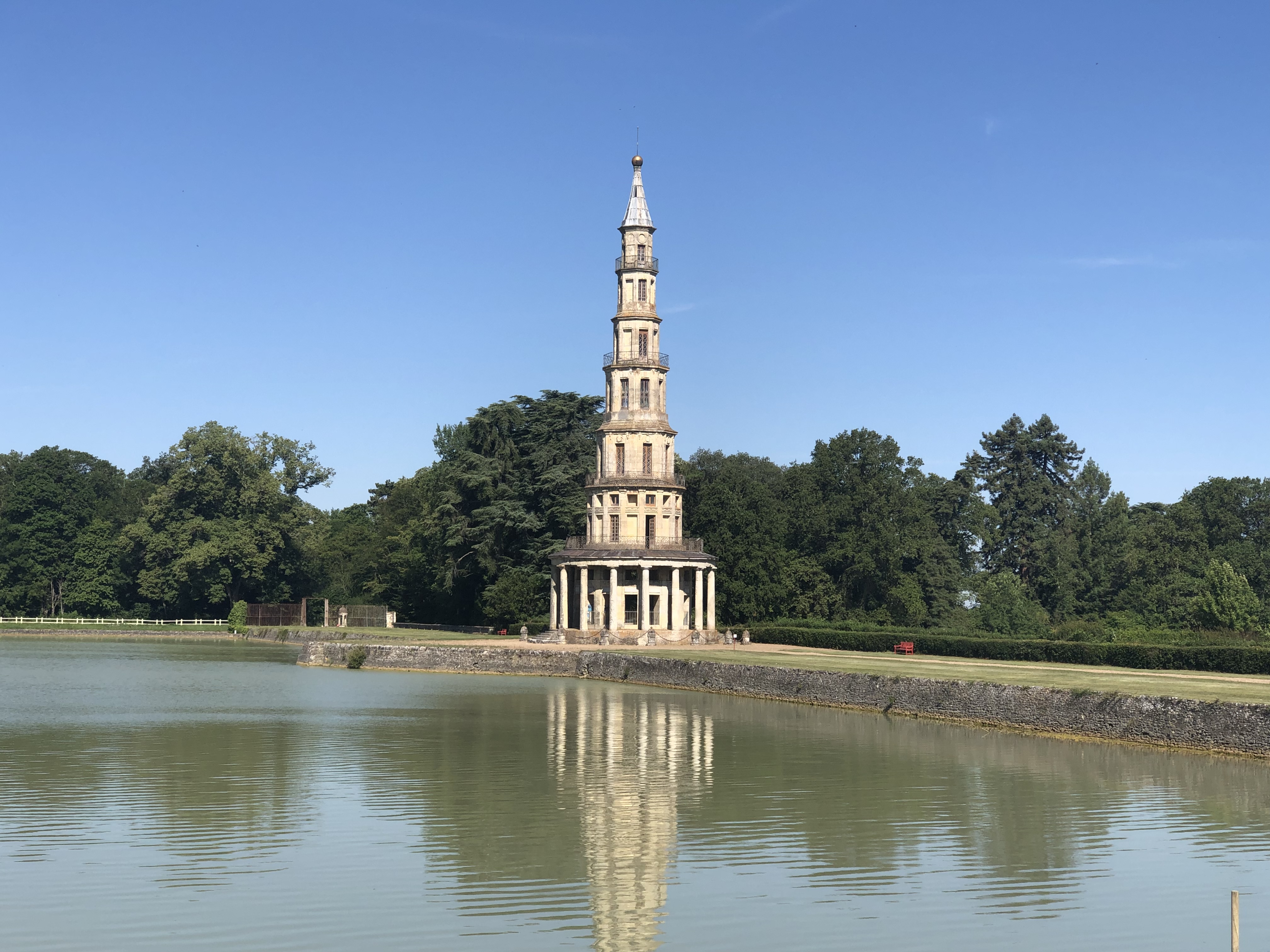 It’s a funny thing, part of the estate of a château now no longer in existence. It has seven floors, each a dome, each smaller than the one below it, with the stairs getting tighter and tighter as you get near the top. 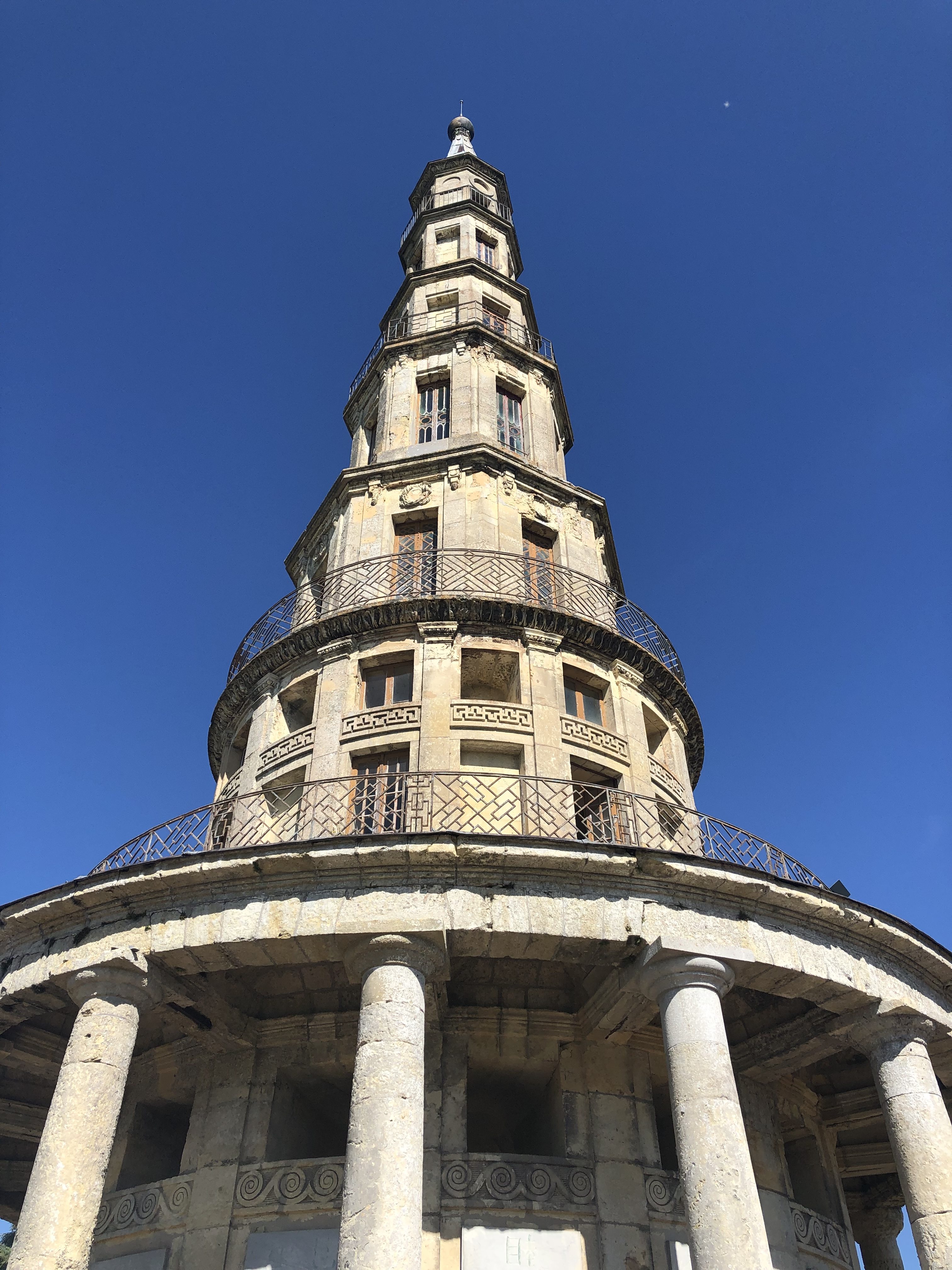 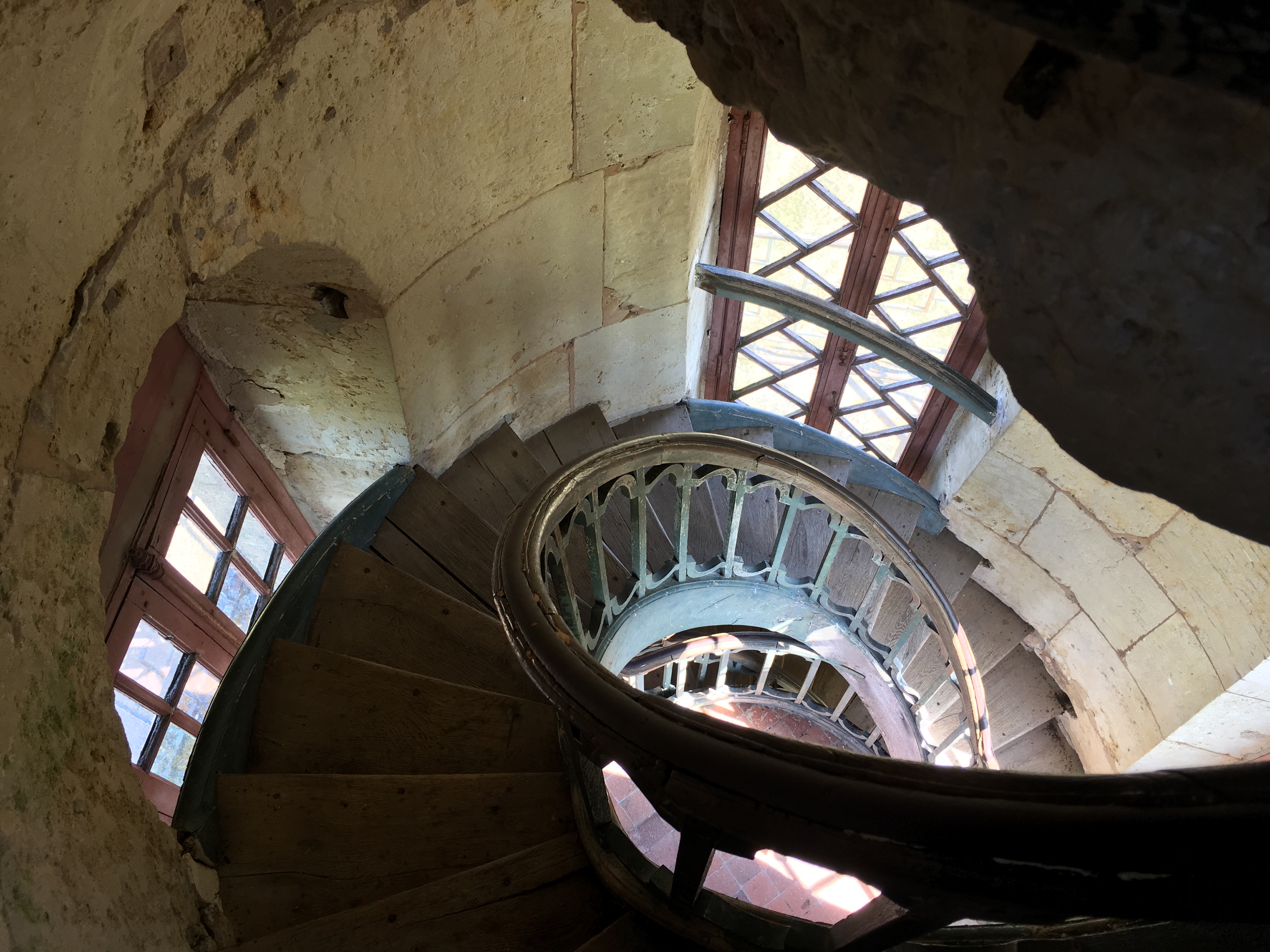 The answer was yes, you can see the château of Amboise from the top of the pagoda, but the iron railings around the narrow balcony outside the top floor looked quite old and insubstantial, and neither of us was brave enough to walk round the outside to the correct side of the pagoda for a really good shot. You can perhaps just make it out in this picture. 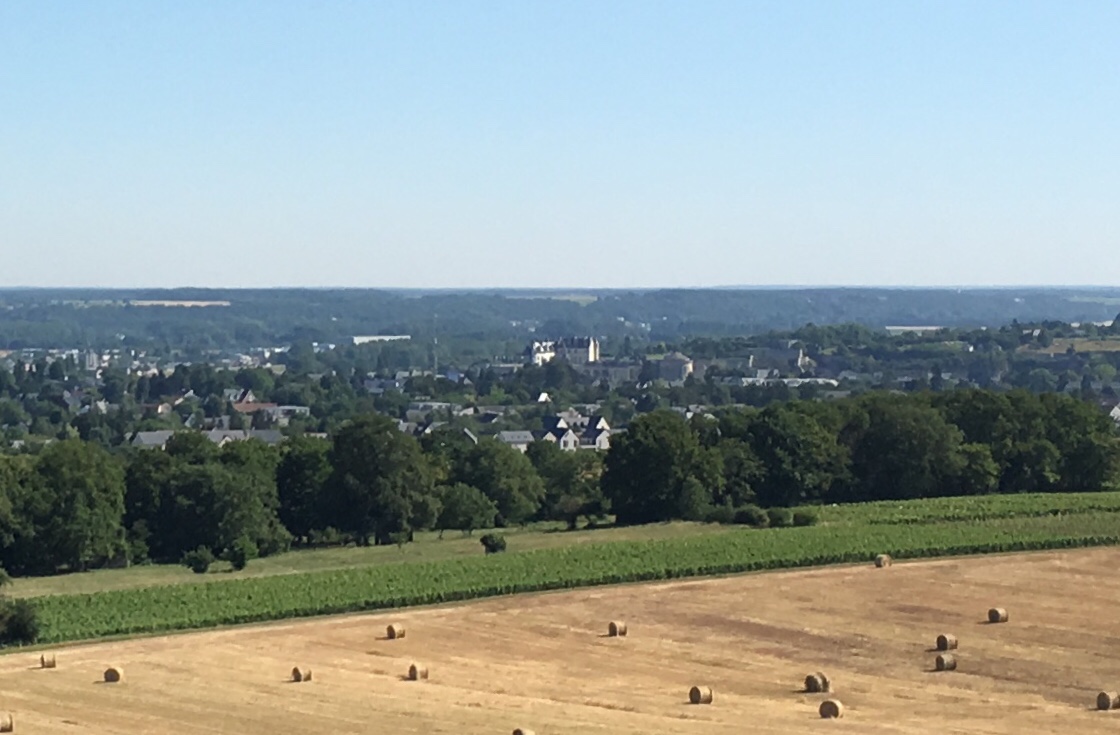 After seven flights of curly stairs up and down, we rescued the tandem from the gravelly car park and rode on in the direction of Chenonceau. Well, Chenonceaux the village and Chenonceau the château – for some reason it was decreed that the château did not need the final ‘x’. On arrival we parked the tandem in the huge and well-used bicycle park, bought our tickets and went in.

It’s very beautiful, and it was a lovely sunny day on which to see it. Not quite as beautiful as Amboise, perhaps, but with its own water (the River Cher), two pretty gardens on either side, and a complicated history of ownership. Here are some pictures, so you can judge the comparison with Amboise yourself. 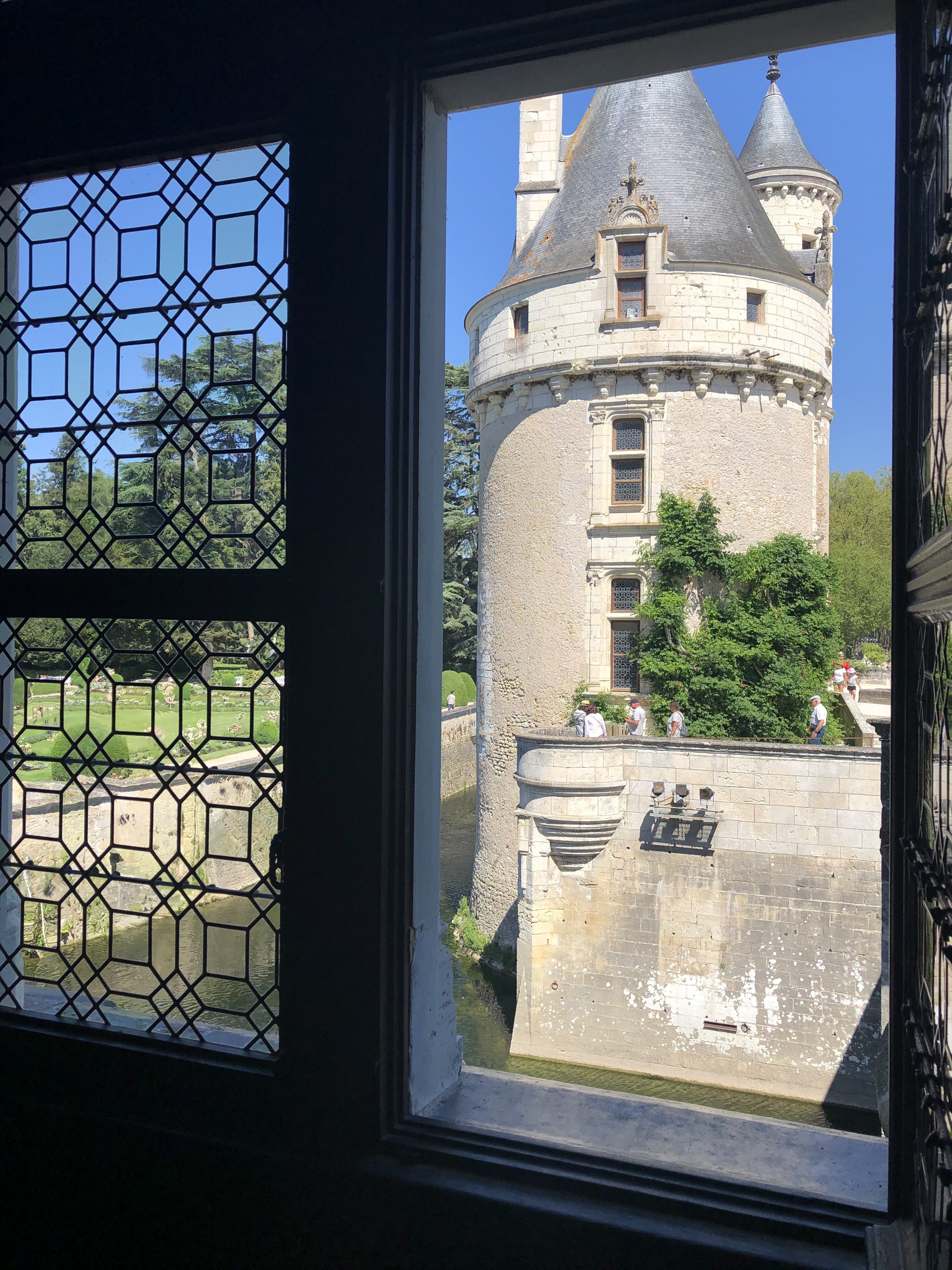 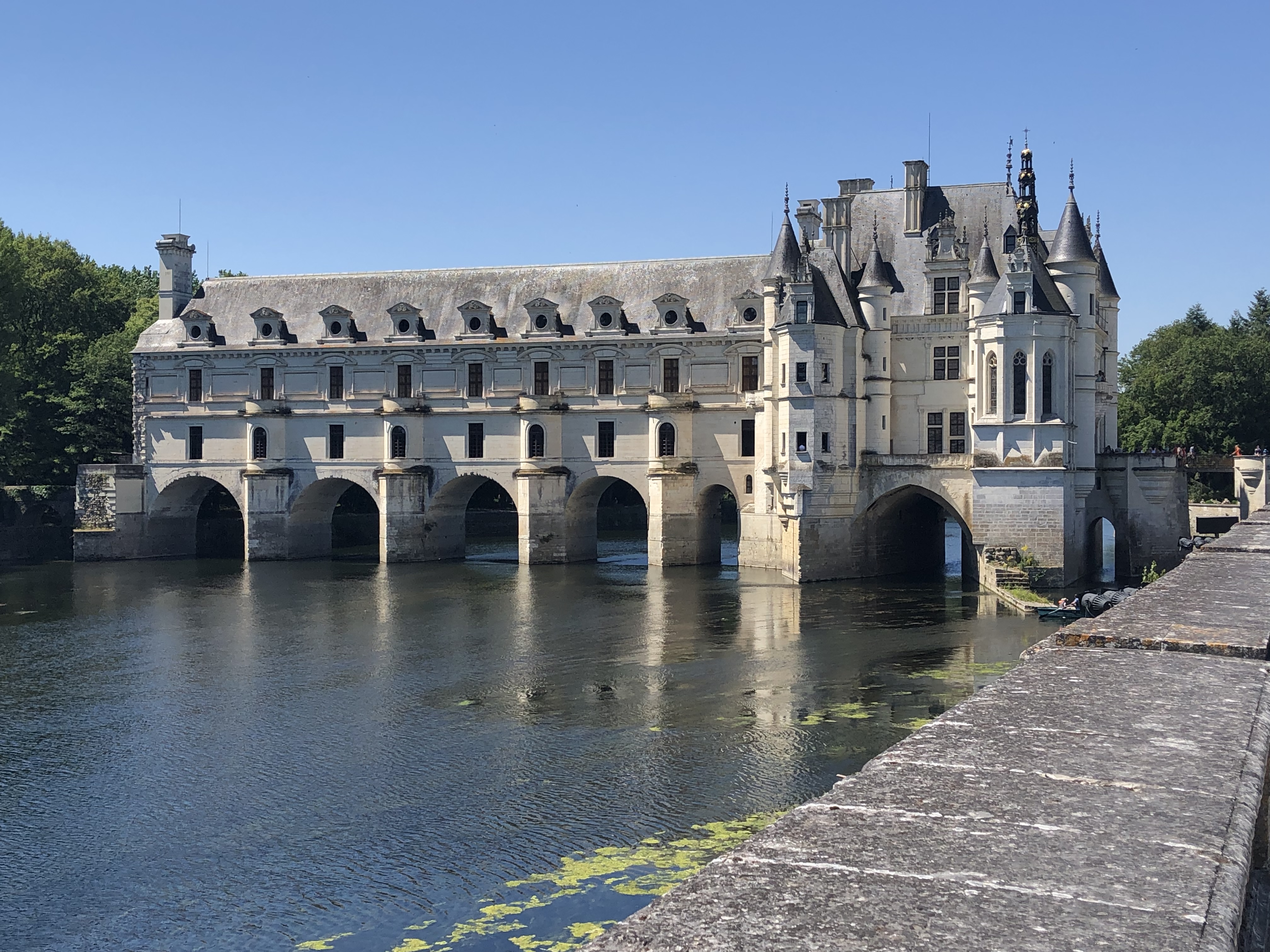 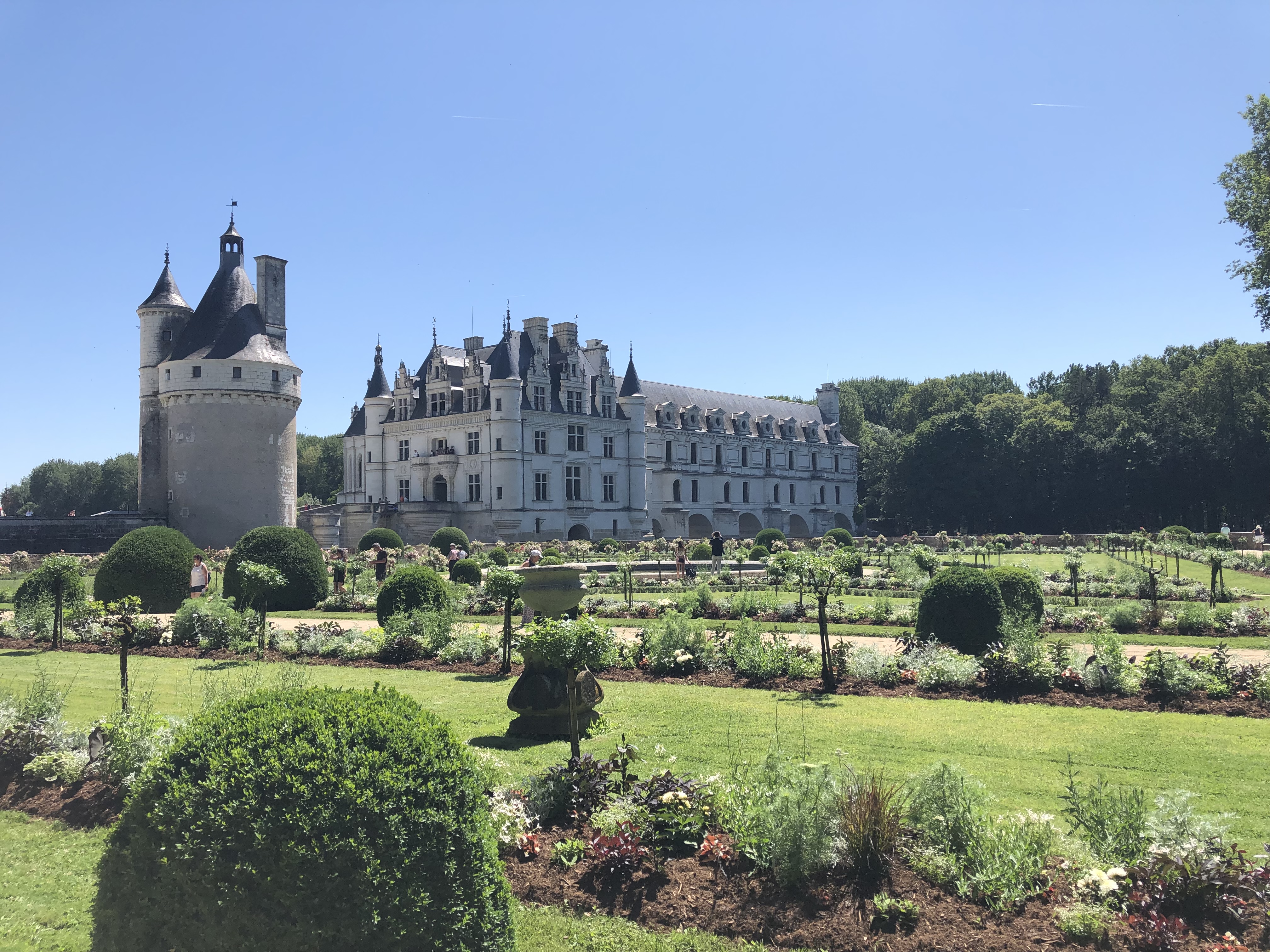 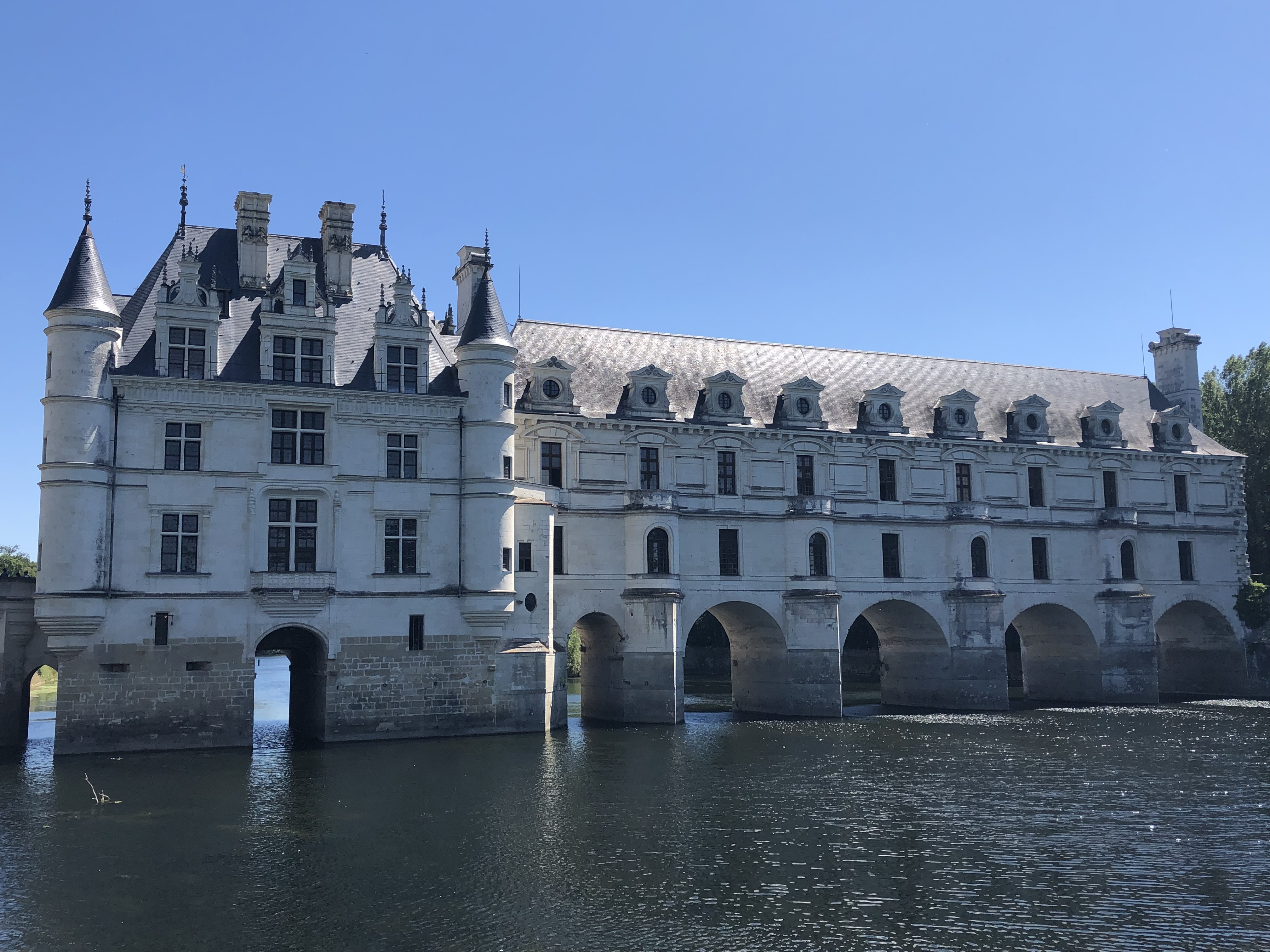 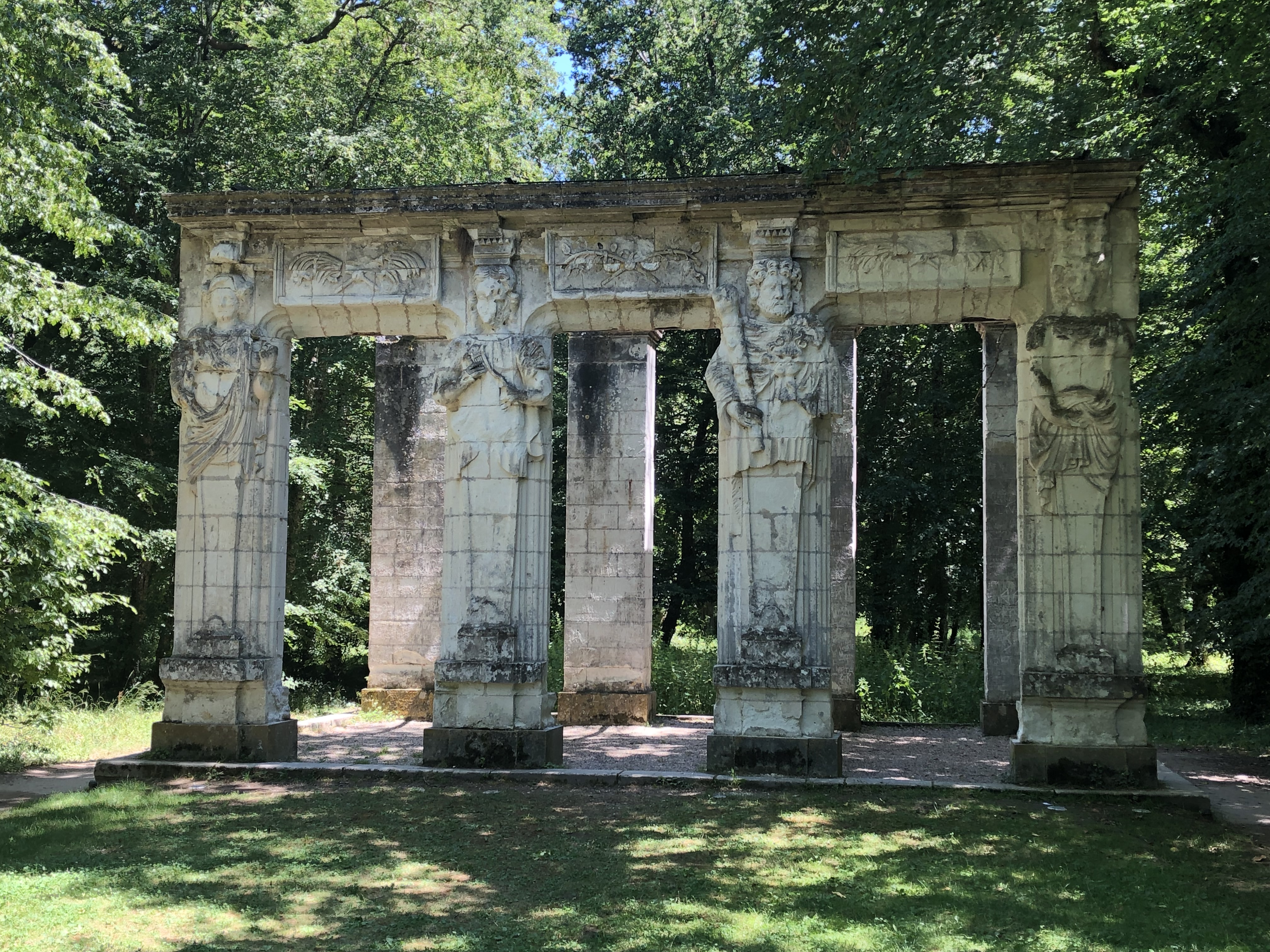 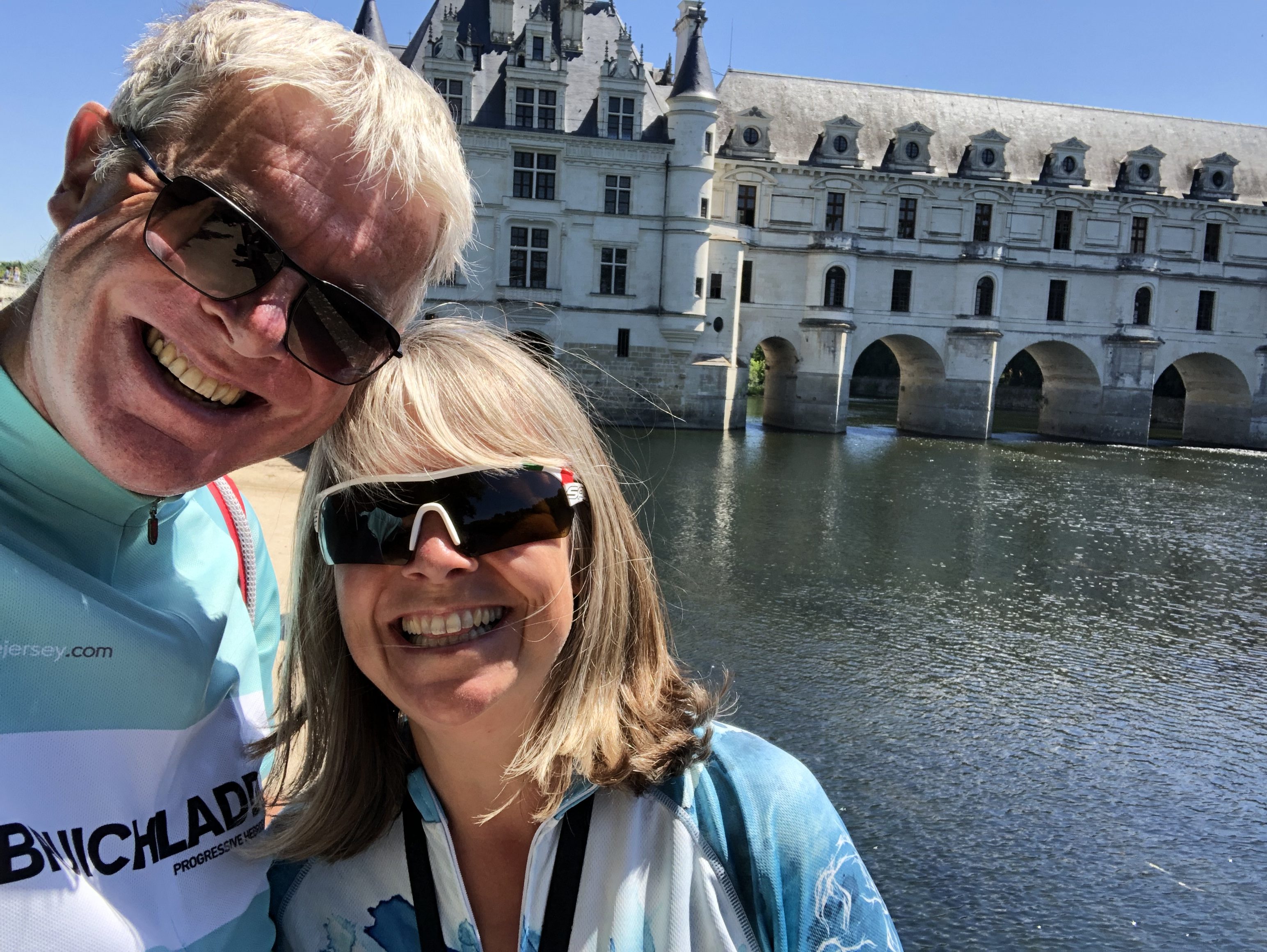 During the Second World War this very spot was on the border between Vichy France and the zone of German occupation, demarcated by the river. The entrance to the château was in the occupied zone, but the gallery, stretching out over the water onto the south bank of the river, made it possible for the Resistance to send large numbers of people across the water into the free zone.

After a good look around the château and the gardens we lunched in the grounds and then set off back towards the Loire to rejoin the official Loire à Vélo Route towards Tours, our destination for the day.

Initially we followed straight, quiet roads, but at Montlouis we found the cycle route, and it was a relief to rejoin car-free cycle paths again. The traffic had been light and very well-behaved, as we’ve come to expect, but it’s extremely relaxing on the cycle path route itself, no traffic at all, and still remarkably well signed.

Montlouis is famous for its white wine. Not all the bottles are this size, presumably. 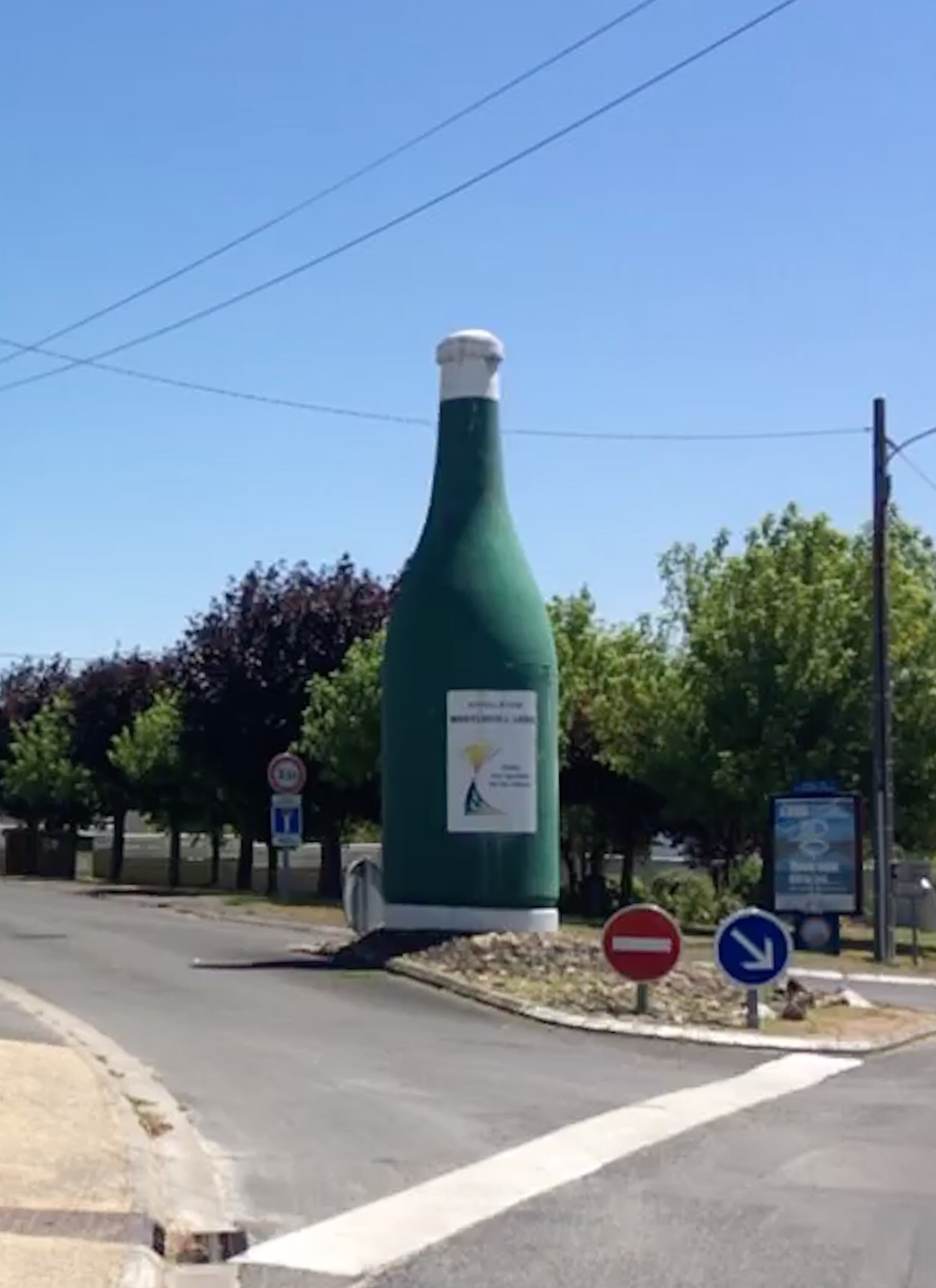 We also reacquired the Loire at Montlouis, greeting it like a long lost friend. We stopped in the outskirts of Tours to drink one last bidon of water and attracted somehow the attention of a dog down in the sandy islands of the river. 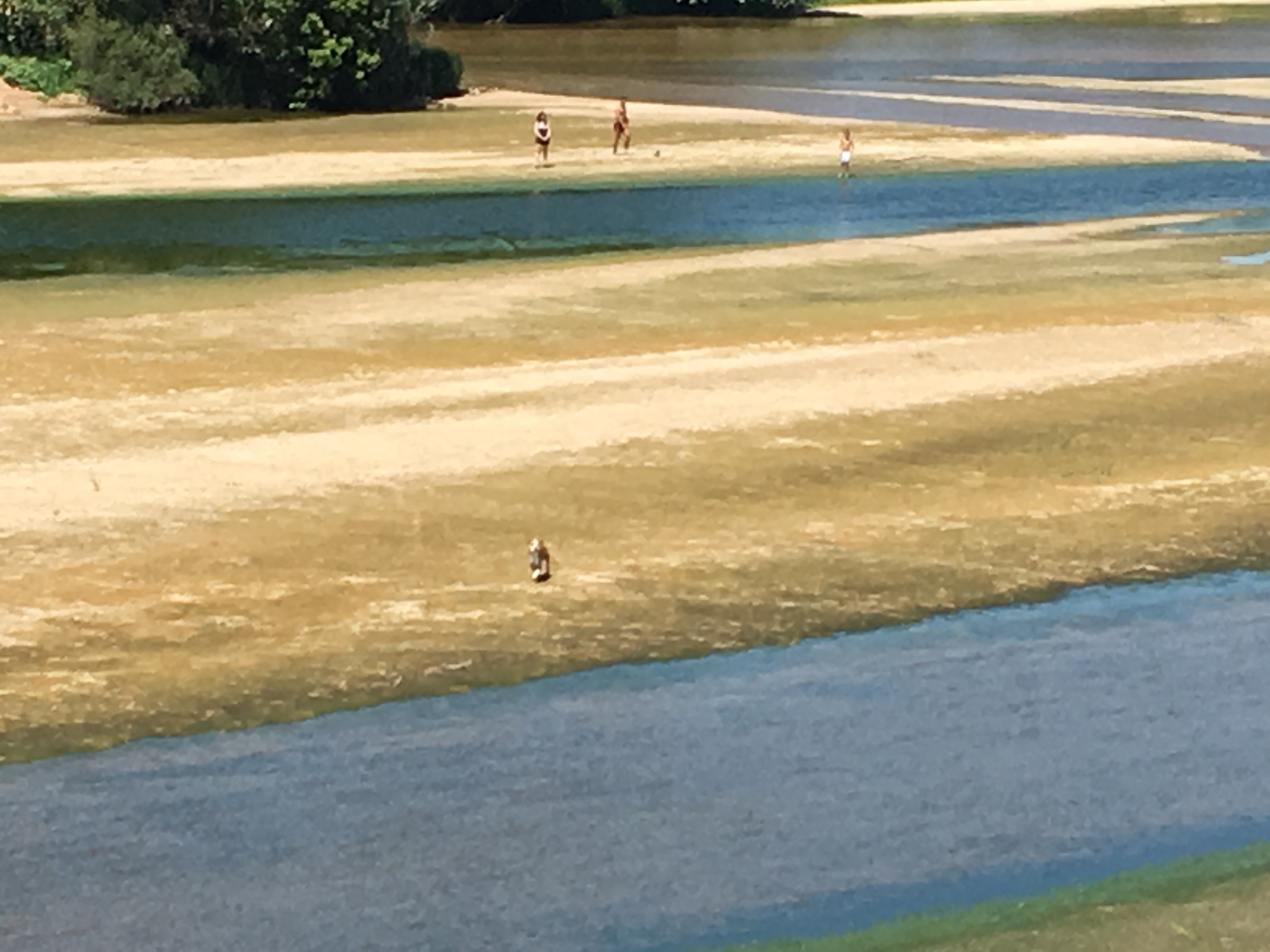 Navigating to our lodgings was a little tricky, mainly in terms of avoiding the twin perils of tram tracks and pedestrians, but we made it.

A long day in prospect tomorrow to Saumur, where we will take a rest day.