Our rest day at Blois (a planned one this time) was very relaxing. After an excellent night’s sleep we wandered past half-timbered houses into a leafy square in the centre of town and enjoyed an unhurried lunch. 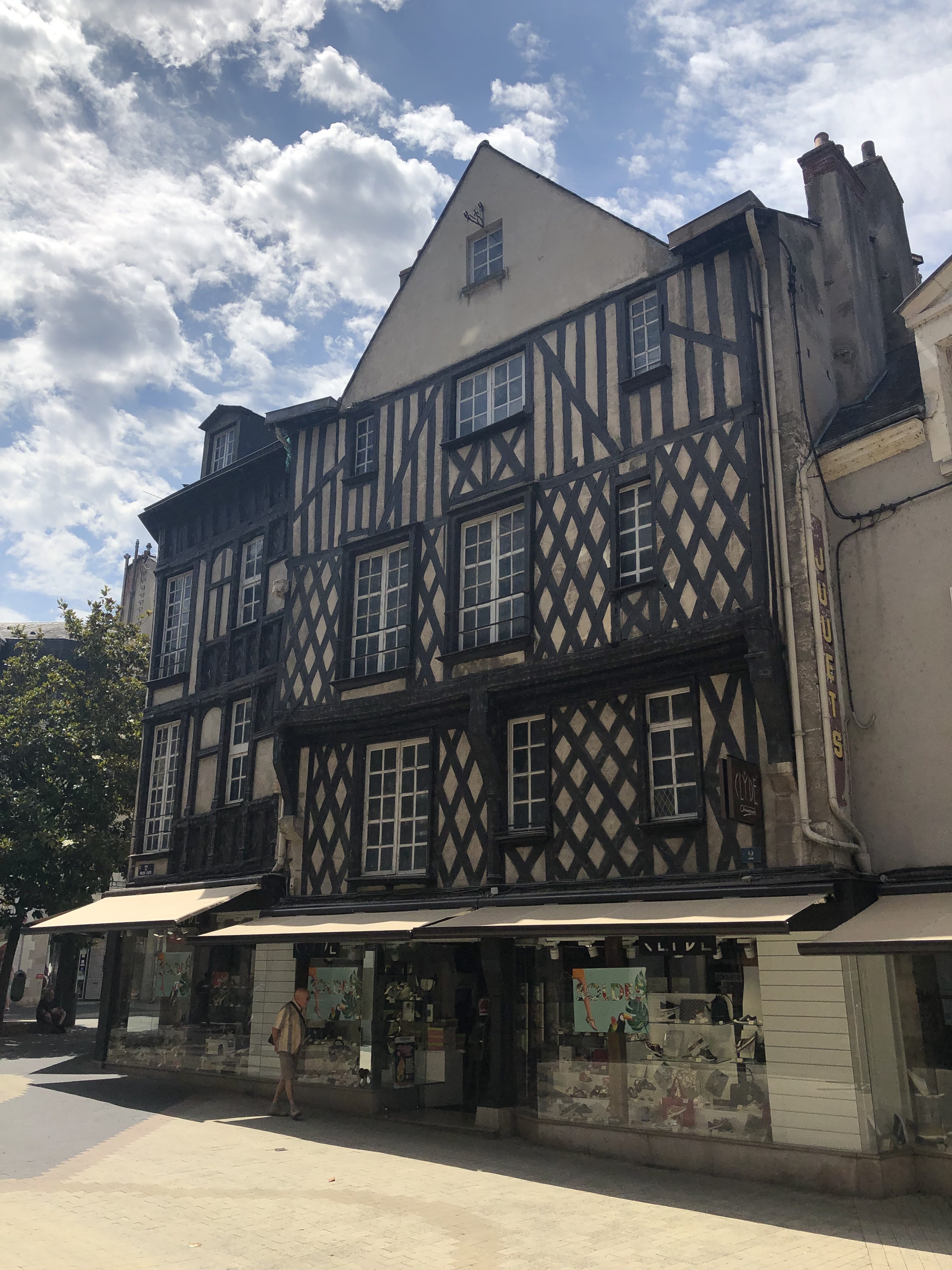 Thereafter we headed up the Denis Papin steps, decorated for a certain Leonardo da Vinci (of whom more later), pausing to re-create a photo of Clare’s Mum, Lesley, and late Grandma, Eva, who visited the Loire with Lesley’s late sister, Gill, some twenty-six years ago. 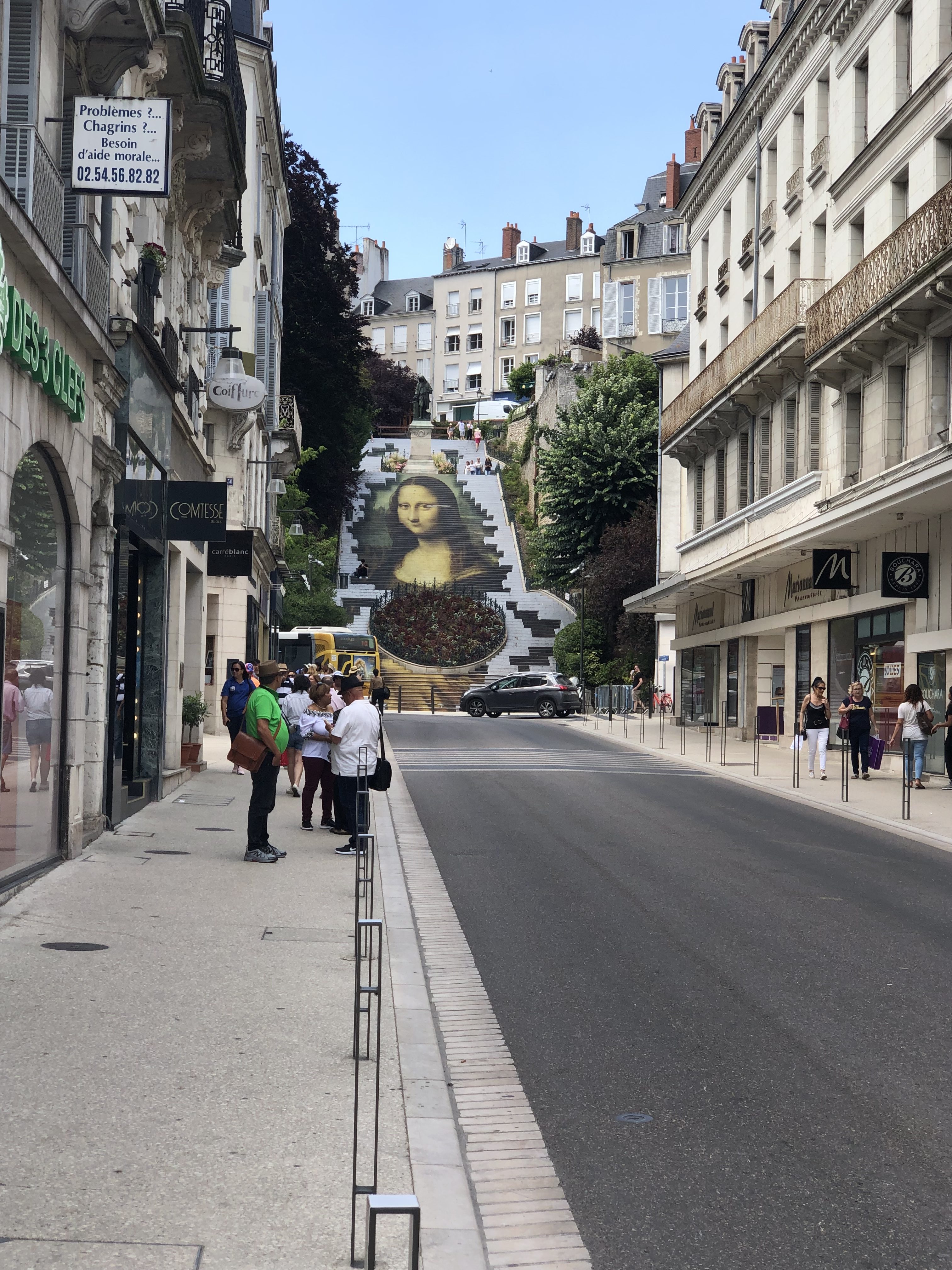 Turning right at the top of the steps we discovered the town’s unusual cathedral, set high on the hillside. Inside it had modern stained glass based on the theme of calligraphy. 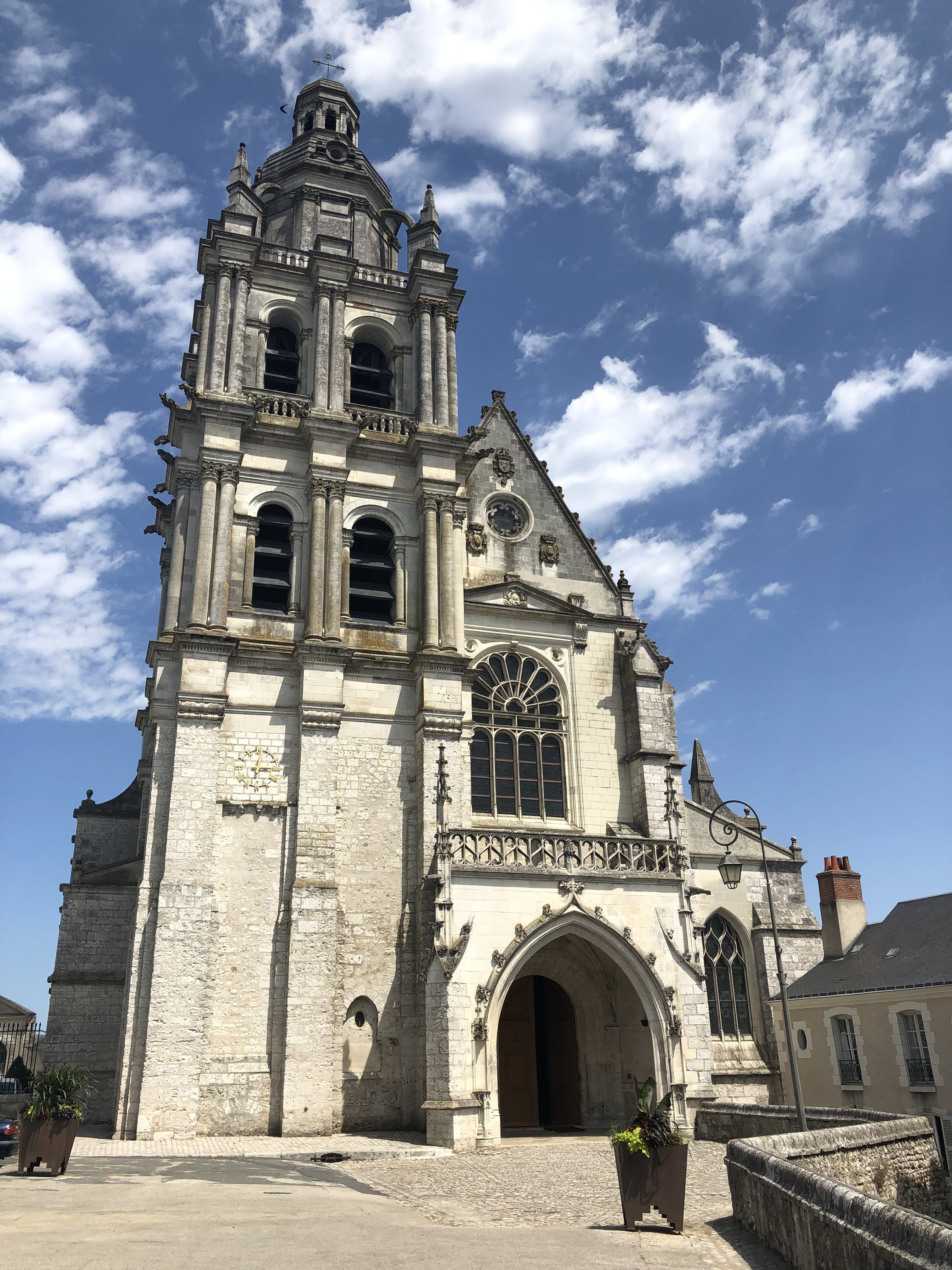 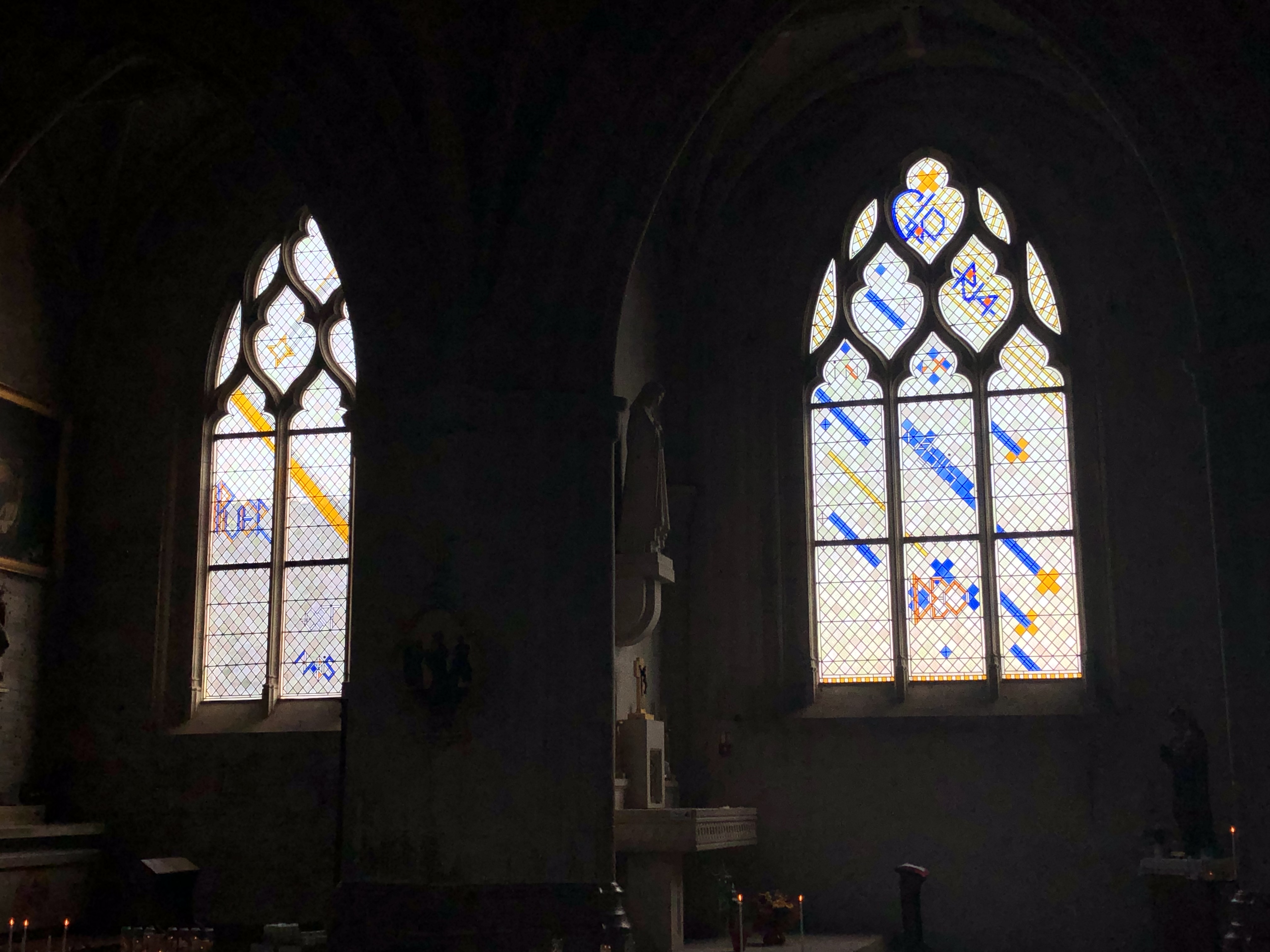 We threaded through town towards the château – no fairytale spires but an impressive edifice nonetheless. 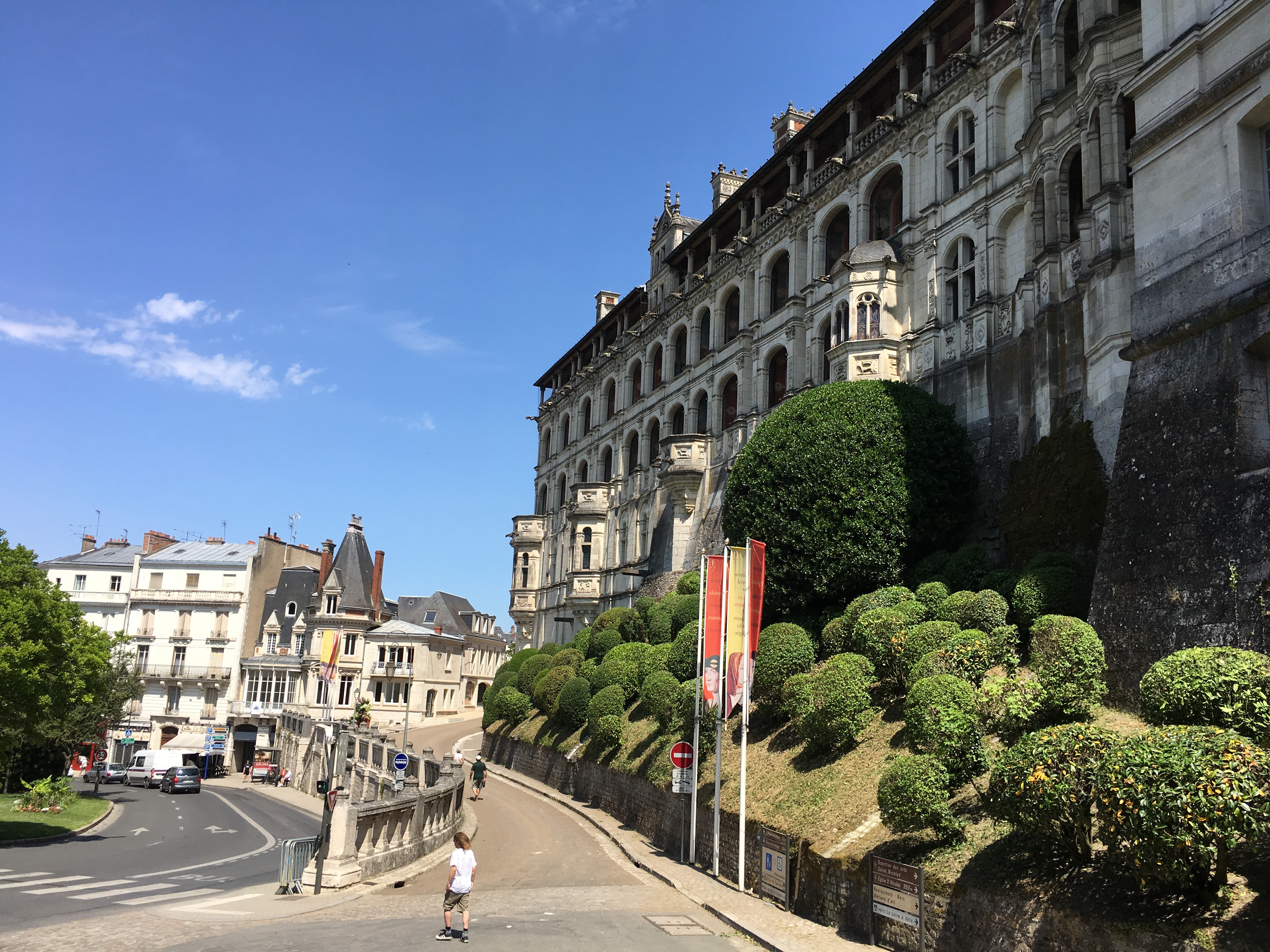 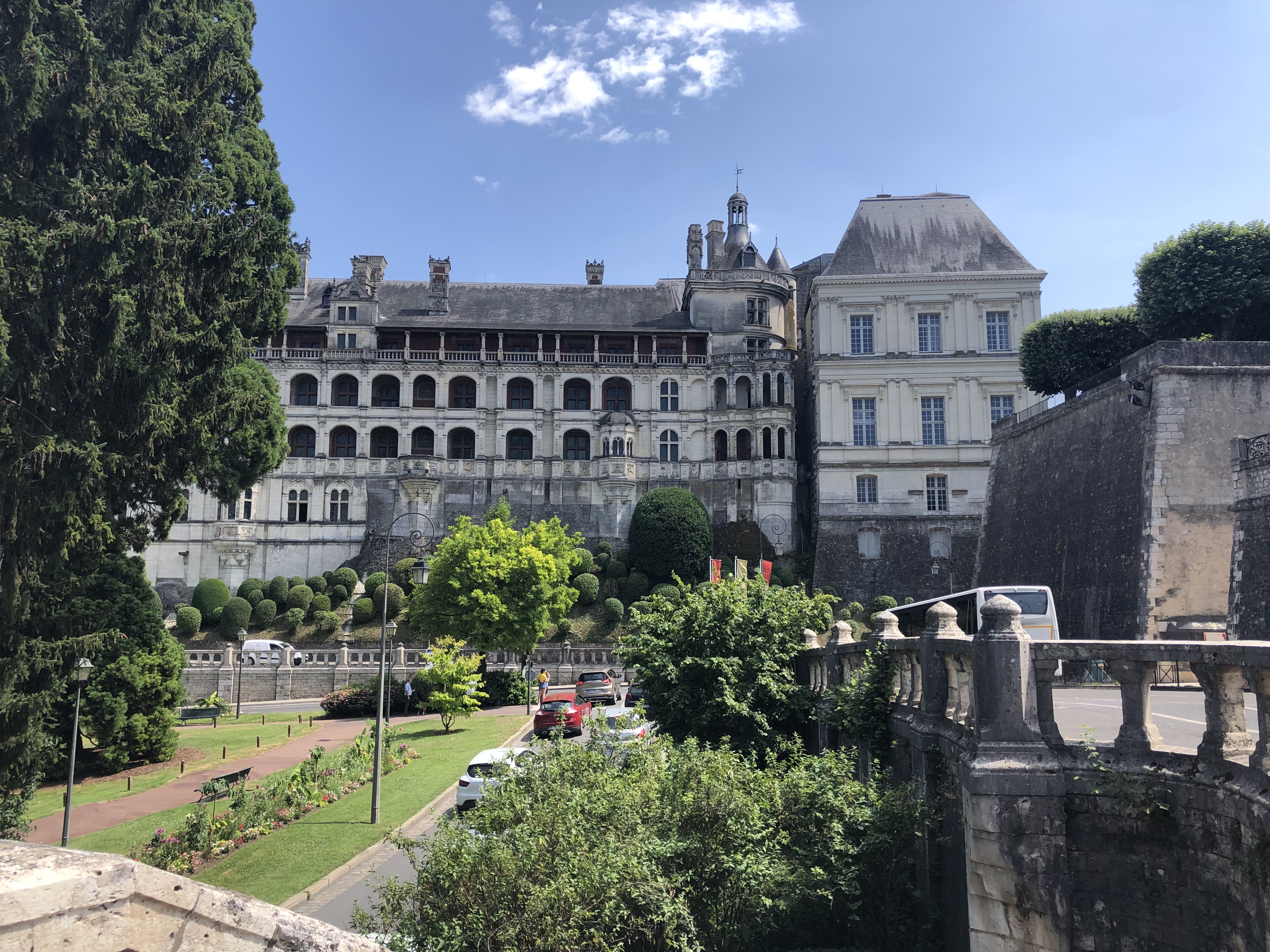 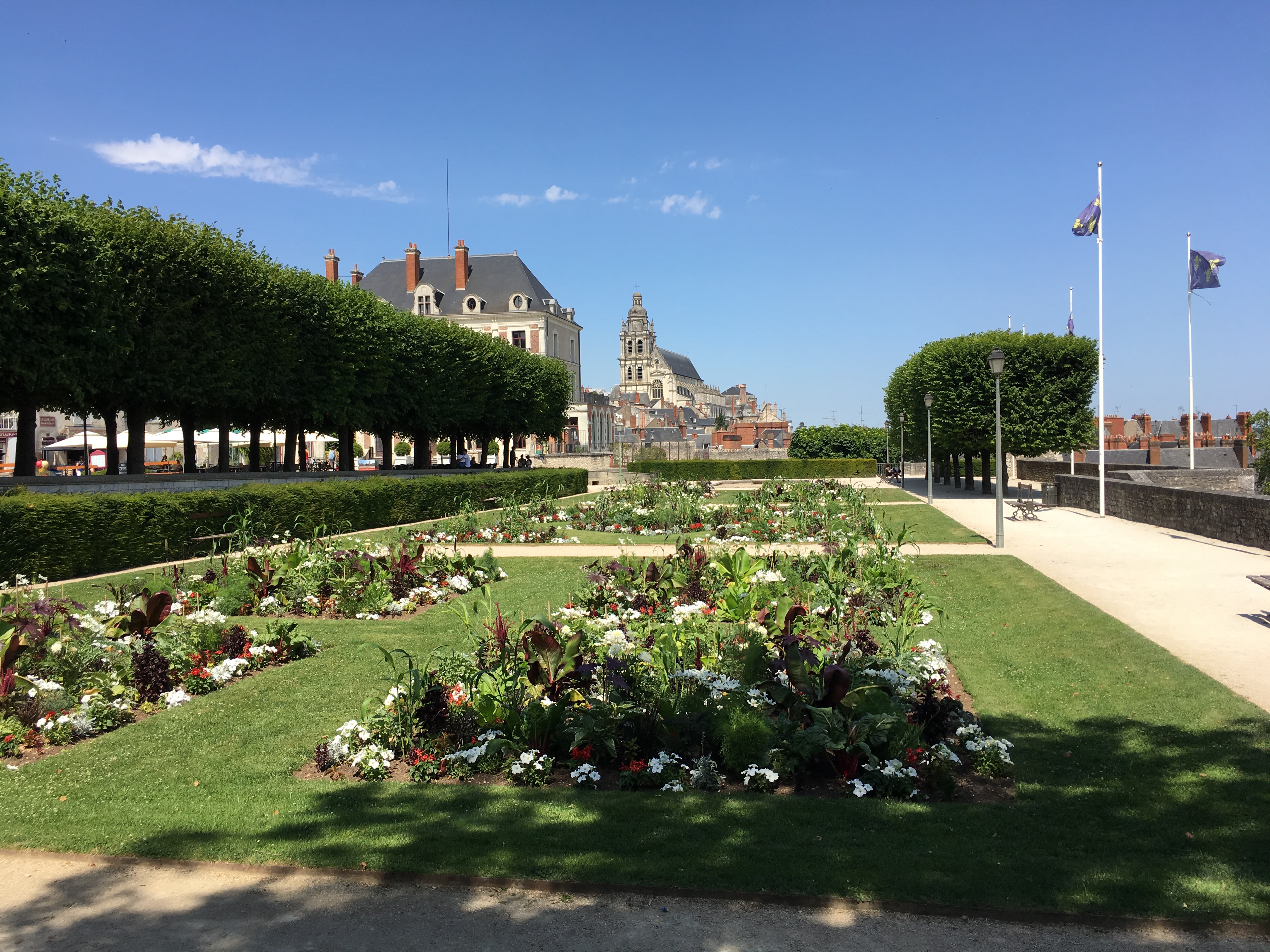 Then, after a little shopping, it was back to the apartment, where the tandem was awaiting a wash and brush-up, and a new set of rear disc brake pads. All of this was soon achieved, leaving time for a relaxing evening.

Today’s route was not a lengthy one. This was a deliberate move, as Amboise offered plenty to see. So we set off fairly late, on our sparkling clean tandem, with its newly-impressive braking power. Almost straight away we crossed over to the southern bank of the Loire, and straight onto well-surfaced cycle paths where we made the most of today’s cooler temperatures and set off at a good pace, surrounded by arable crops and not a single vineyard. 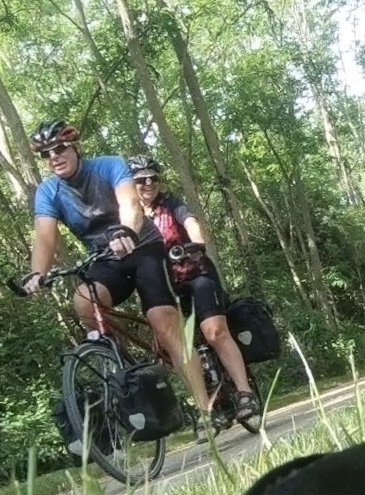 After an hour we reached the Château de Chaumont. We only saw its riverside aspect, and should perhaps have investigated further. However we’re having to ration the number of castles on this trip, for fear of château-fatigue!

Almost straight away we encountered vineyards! 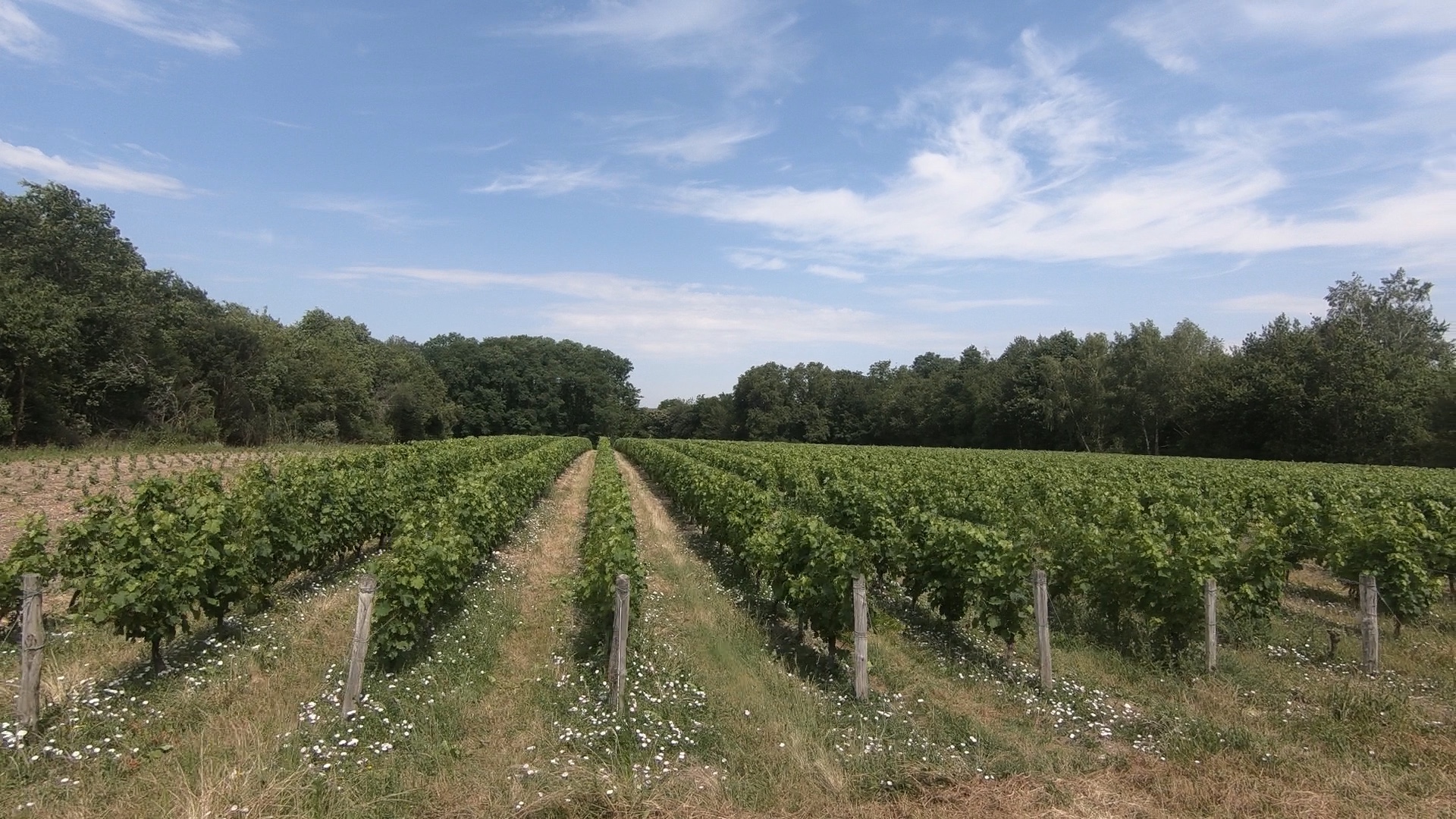 Not since Sancerre have we seen a single row of vines, but now we were surrounded by them. Also, hills. This was slightly unexpected, but we coped with them well enough, and before long we were descending towards the riverside road which brought us into Amboise.

We were impressed, straight away. A magnificent château looks down upon the river and town. 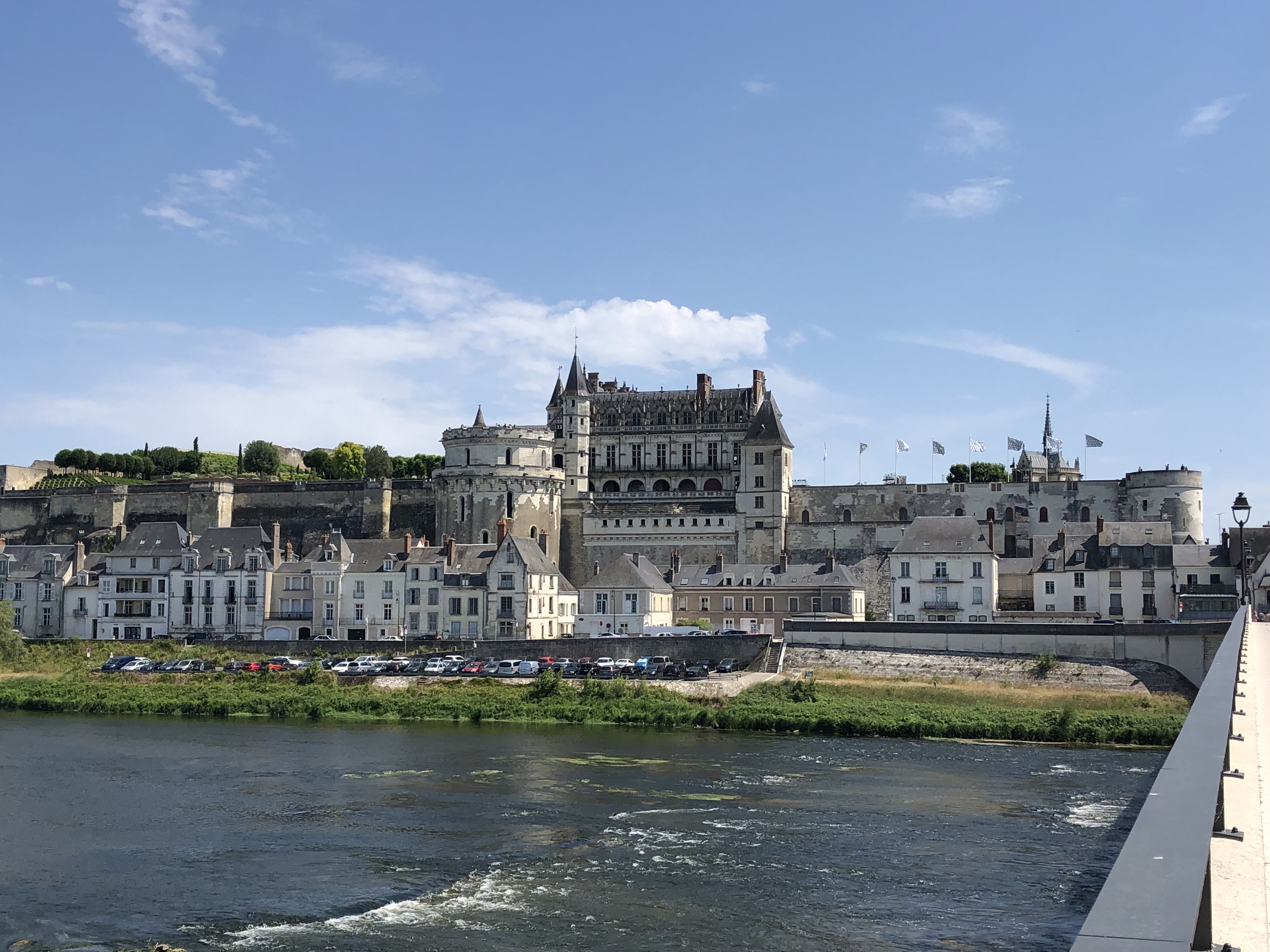 Before exploring it, we turned into the attractive main street which was lined by restaurants. It was extremely busy, but we found a quieter restaurant after a short walk. A good lunch fortified us for the steep steps up to the château entrance.

What a perfect place for a castle, and what a good job they made of it. Triangular in outline, with one wall abutting the cliff above the river, the bastides gave excellent views over the town and the Loire. Inside the Chapel of Saint Hubert contains the tomb of Leonardo da Vinci, who spent the last three years of his life as a guest of King François I at Clos Lucé nearby. 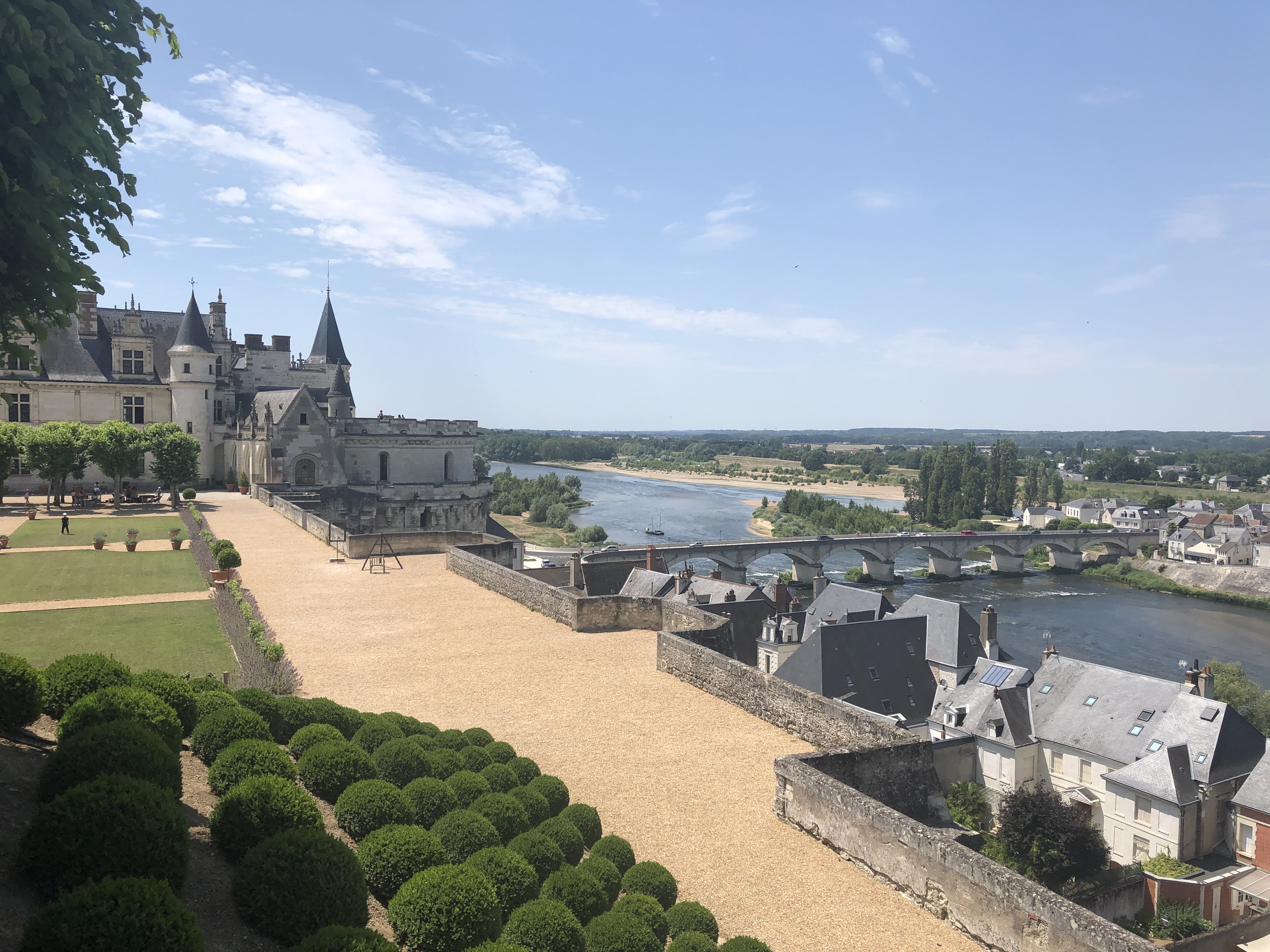 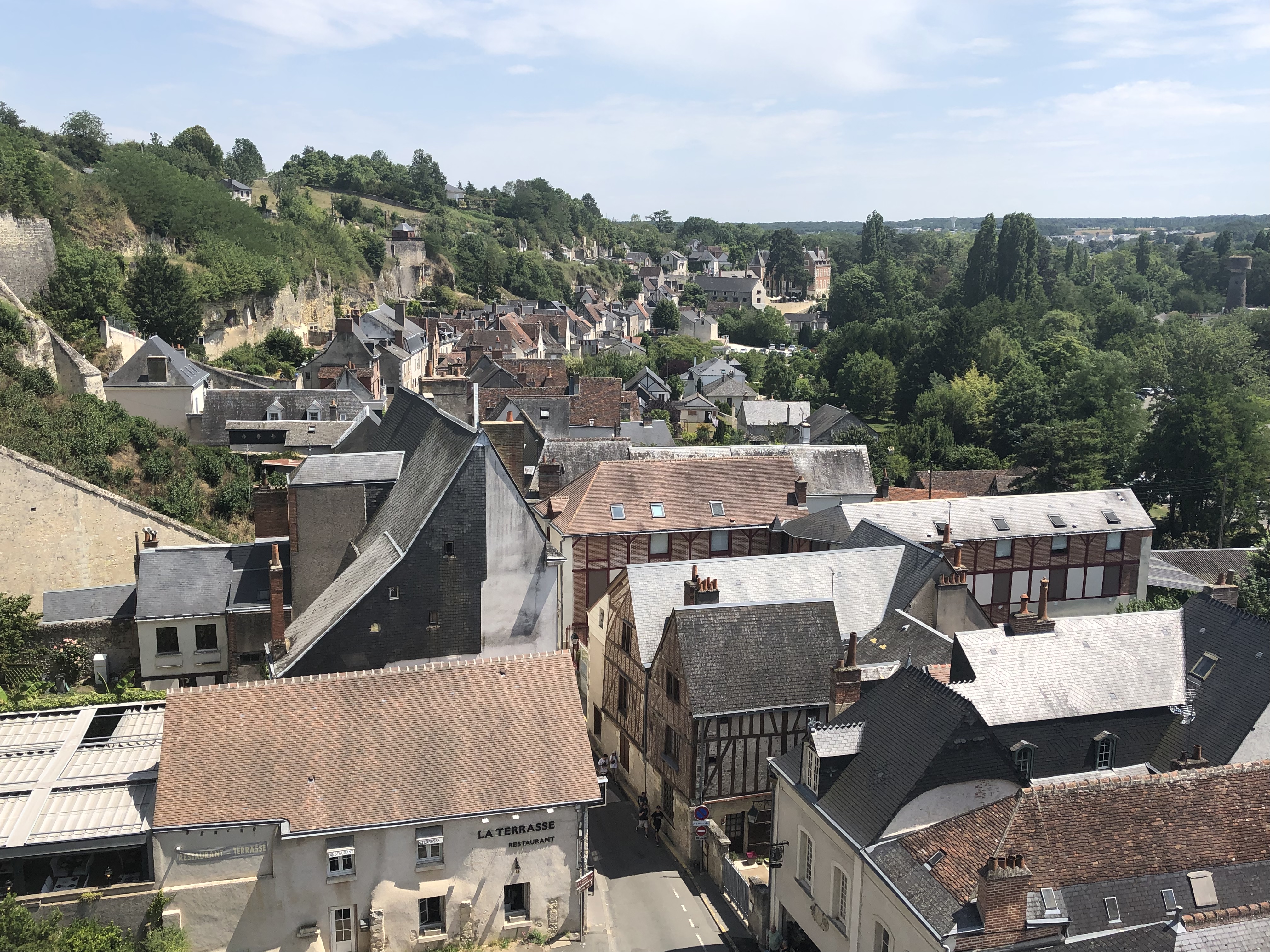 It was a most enjoyable experience – we strolled around the grounds for a while, spotting a view over to the Chanteloup Pagoda (tomorrow’s first destination) and admiring the lavender borders, chock-full of bees and butterflies. 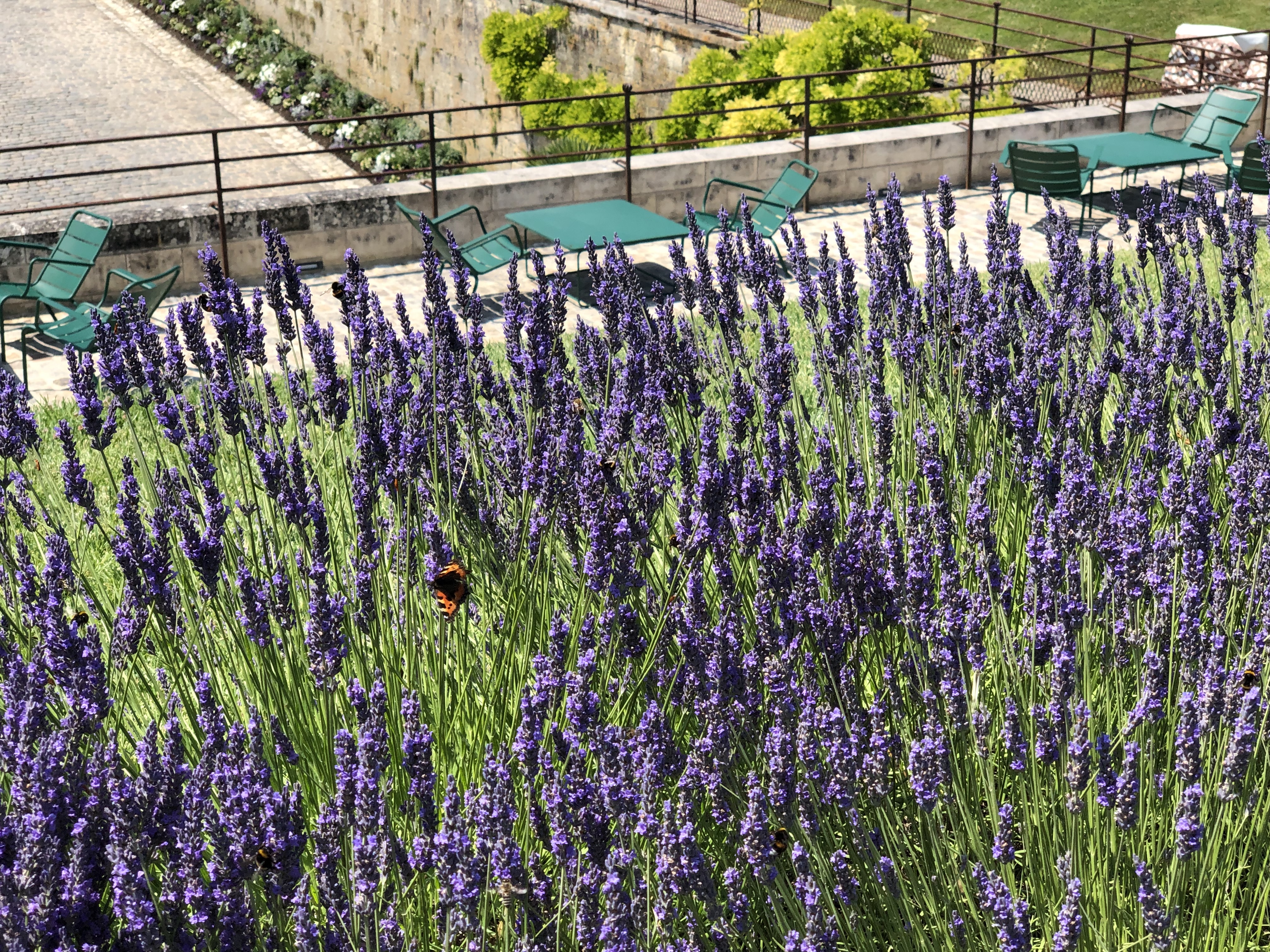 Returning to the tandem we cycled uphill to take a look at Clos Lucé, a delightful brick building with a Tuscan-style elevated loggia. 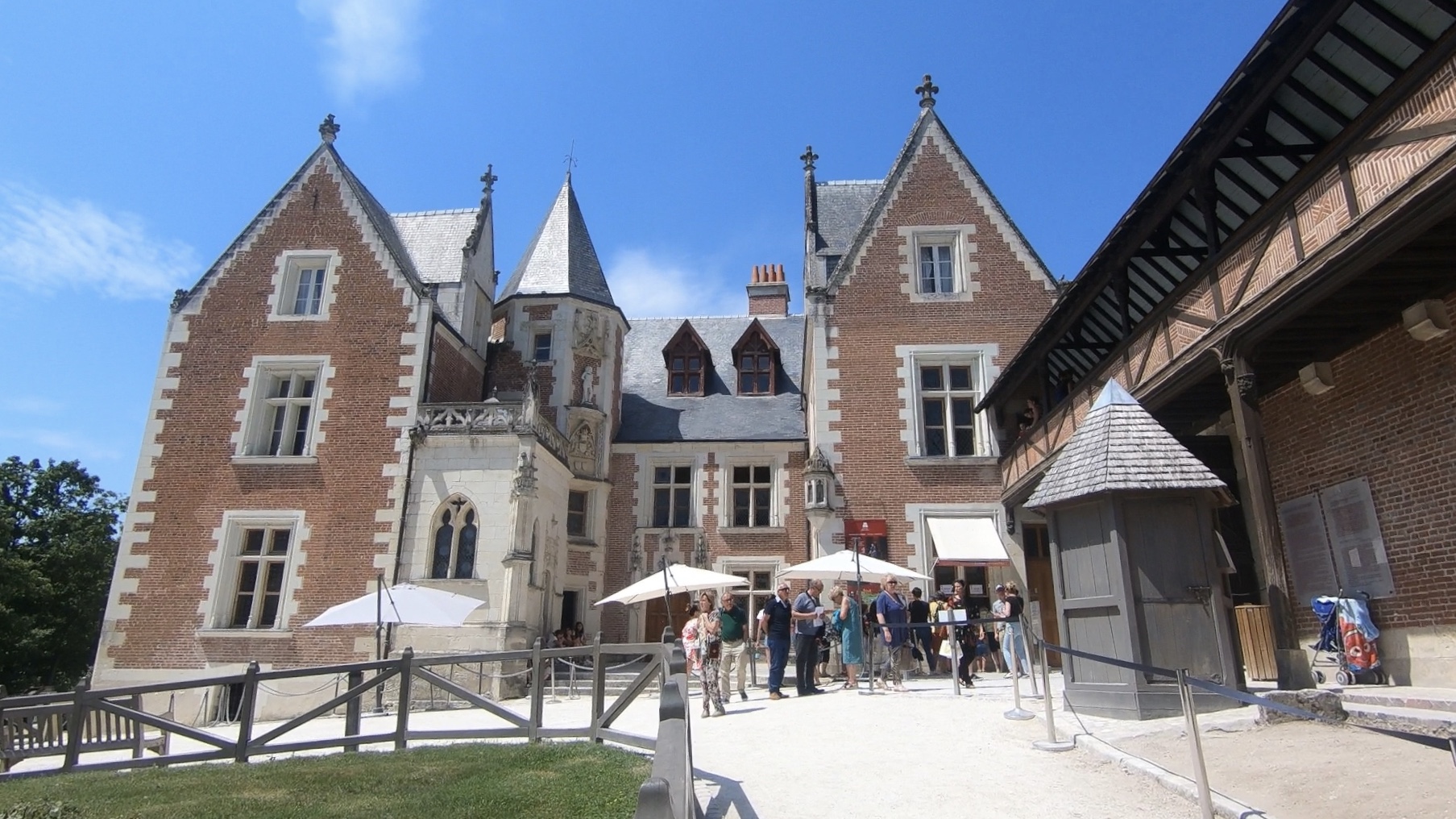 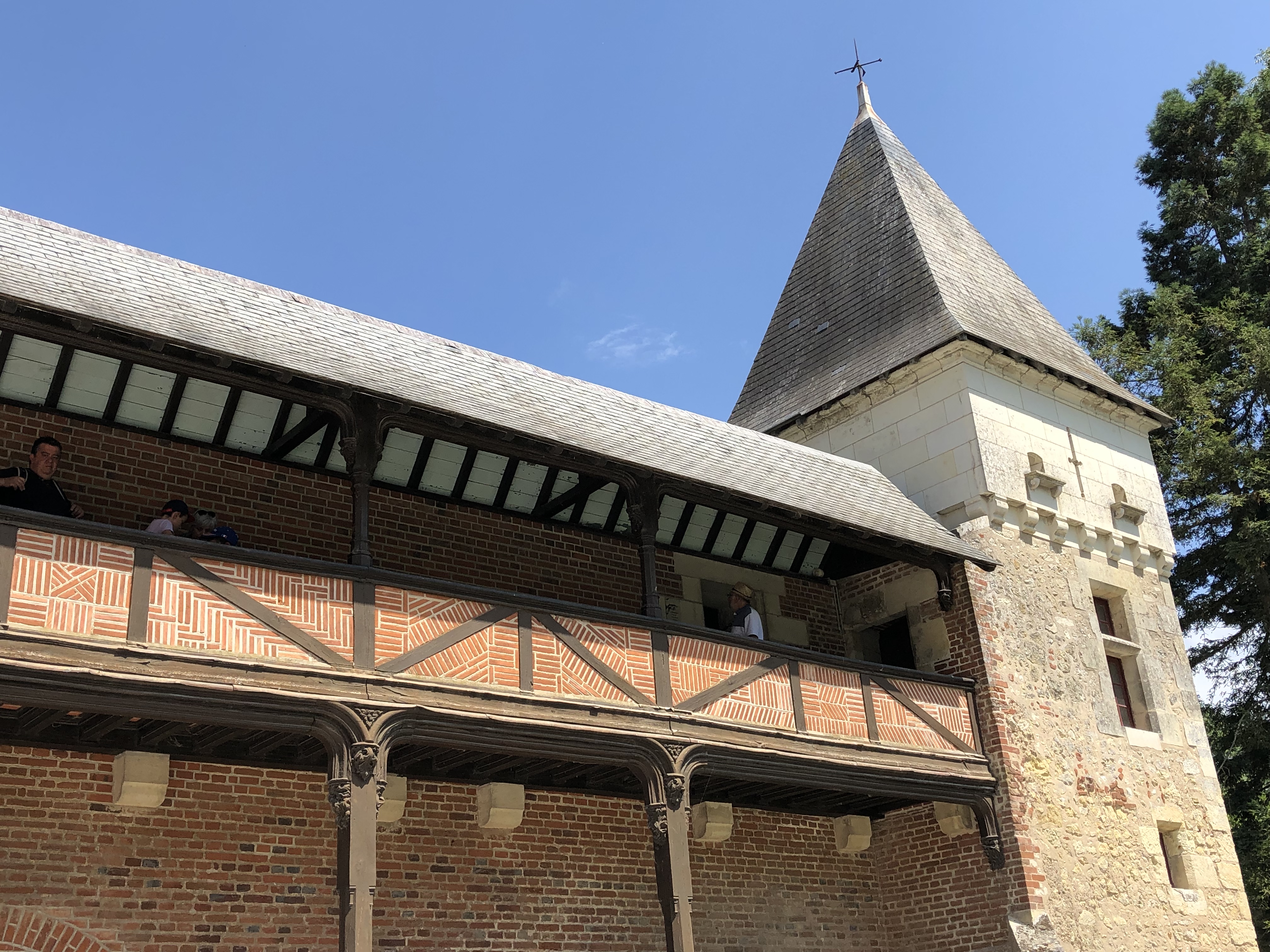 There was a long queue for the interior, though, so we returned to the town and found our apartment for the evening.

Tomorrow we head away from the Loire, as the Château de Chenonceau is set on the side of the Cher river, a tributary of the Loire which doesn’t actually meet with it until after Tours. We can’t miss this particular château, though. Thereafter we’ll cycle on to Tours itself.