Our hotel overlooked the vineyards west of Sancerre, and we were able to enjoy the view both from our room and the (very welcome) swimming pool, with vines covering almost the entire landscape. Later on we walked gently uphill into the town centre. Just before reaching the top, we had a good view over the Loire, looking back in the direction of La Charité-sur-Loire. 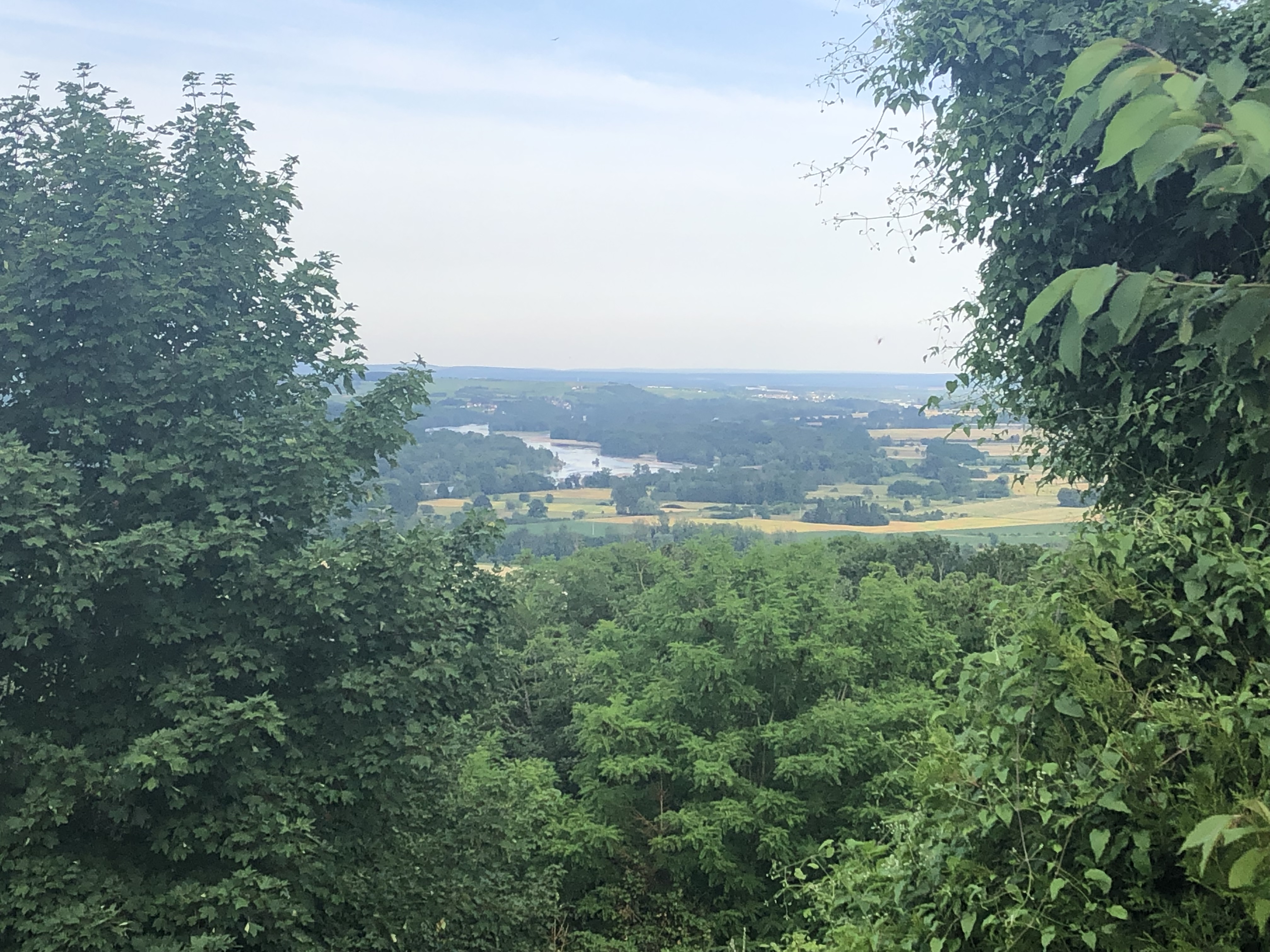 In the centre the buildings are almost universally constructed from a very white limestone, which makes for a pleasing effect. The streets are twisty and narrow, with the exception of a central square, wherein one can find most of the restaurants. 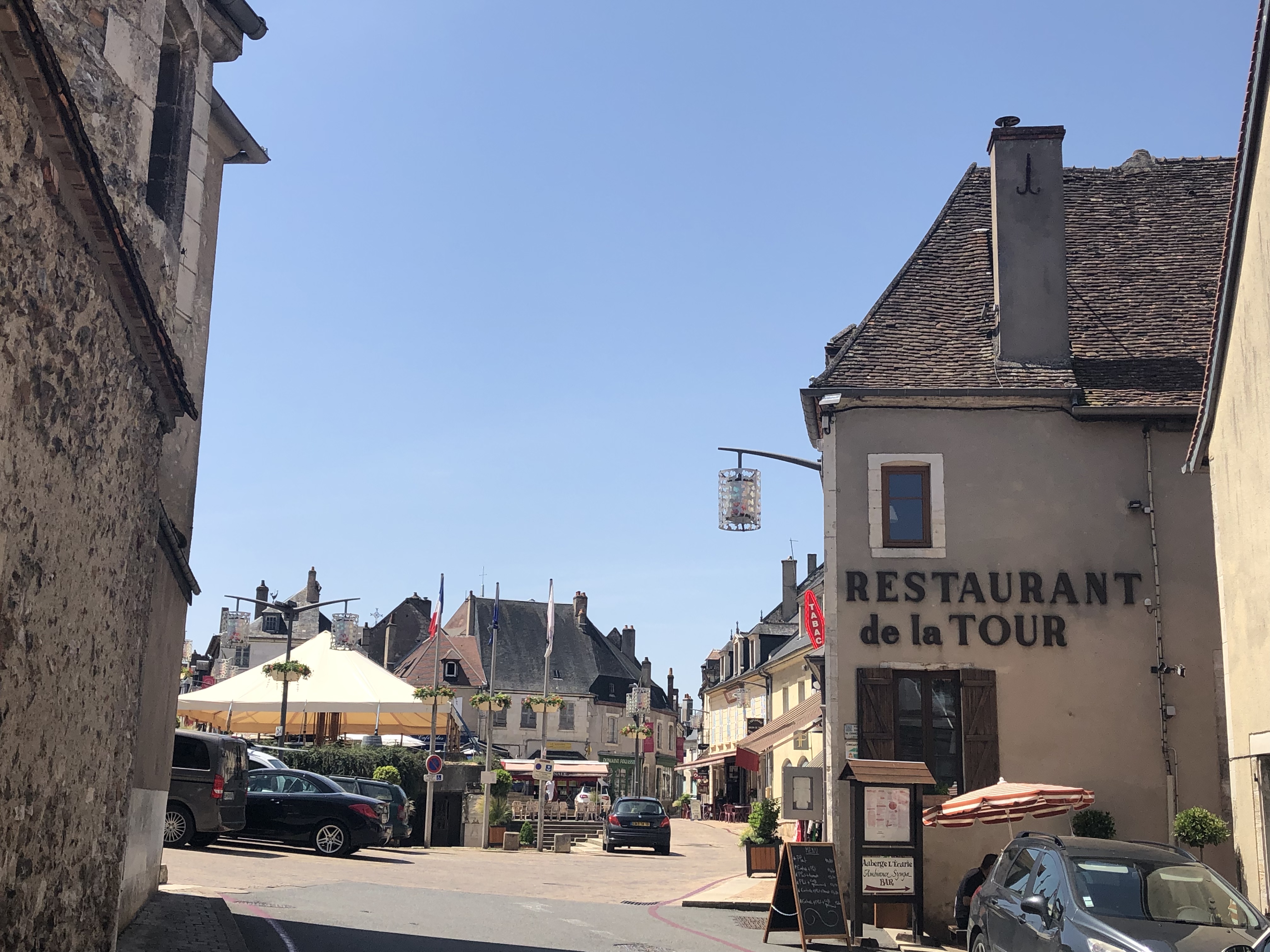 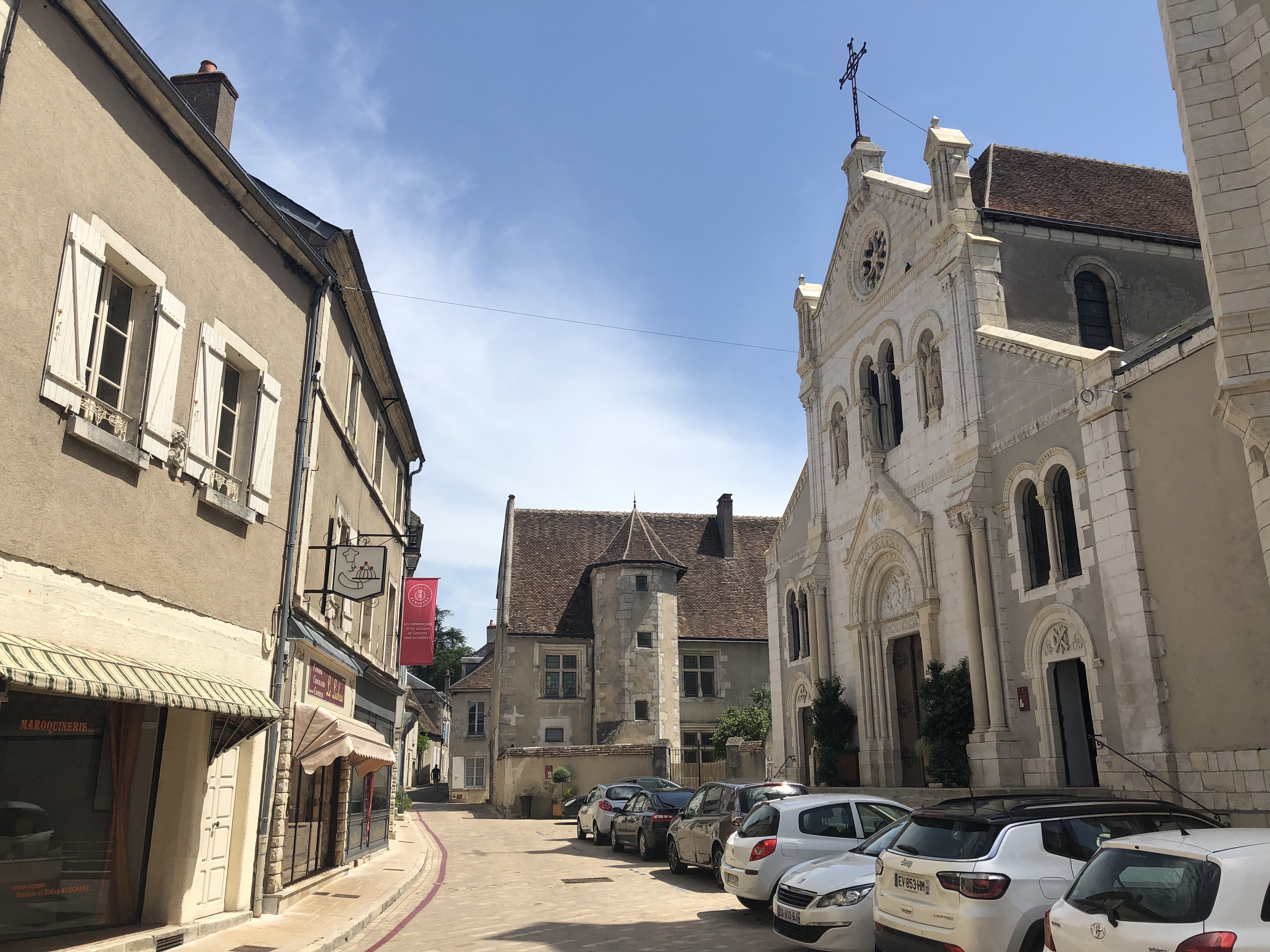 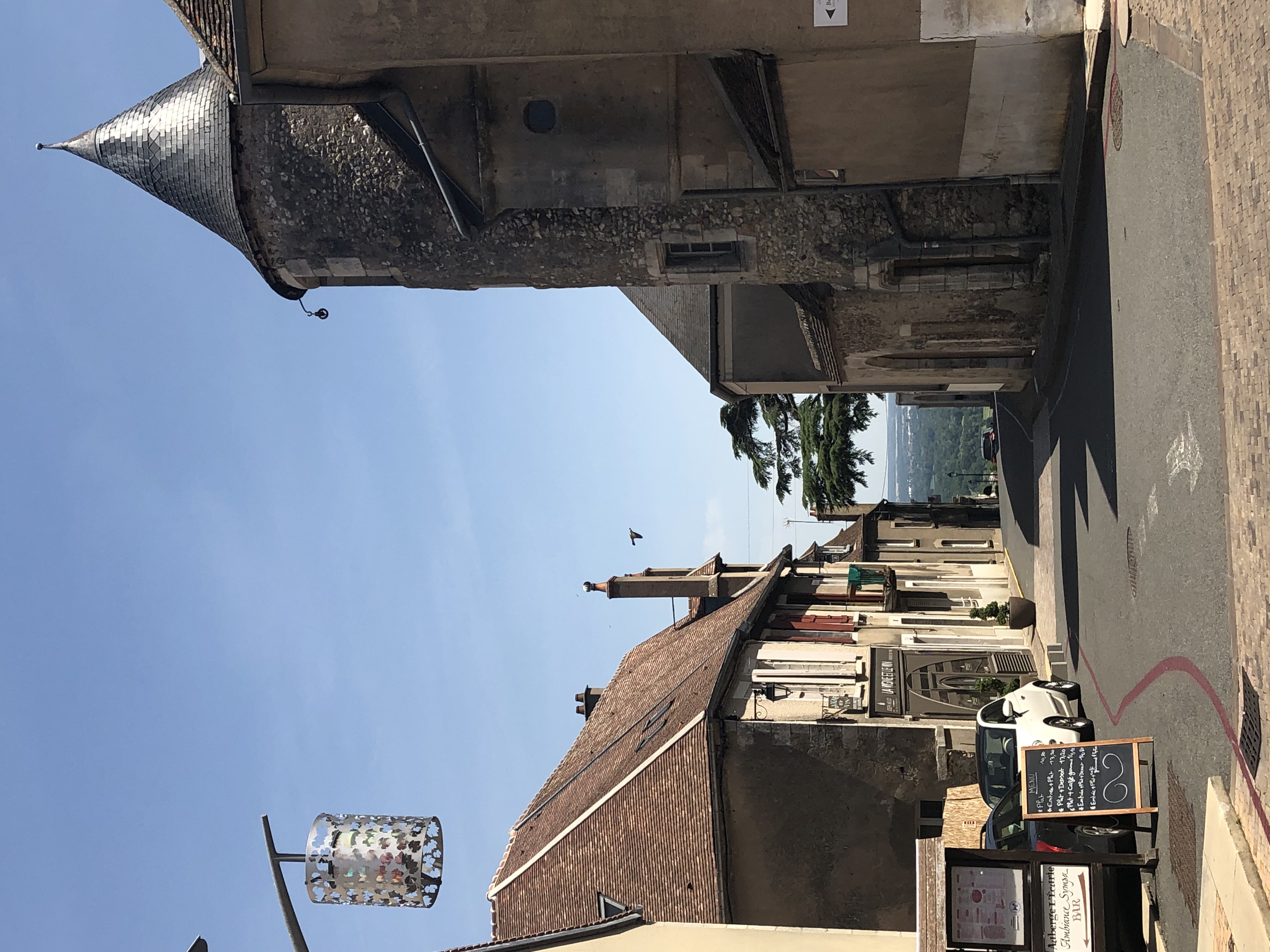 It being Monday, most of the restaurants were shut! Nevertheless we found one to our liking and sat outside in the rather warm evening sunshine. To accompany our meal we chose Pouilly-Fumé and later a Sancerre rouge.

Our rest day started with successful attempts to book accommodation for the next couple of days, and then some relaxation by the pool. We walked back up into town for a lunch of salads and Sancerre, and took one or two more photographs. 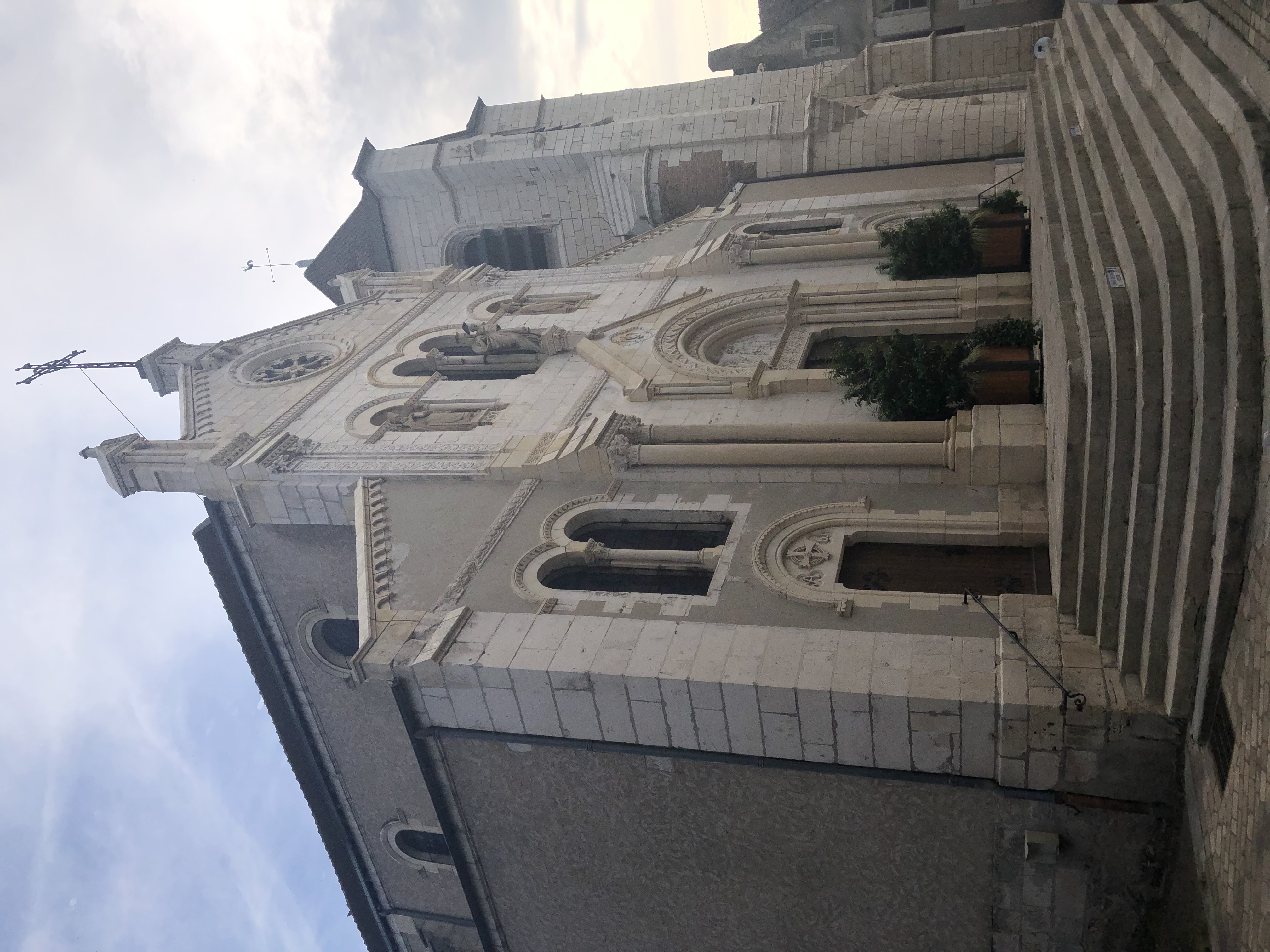 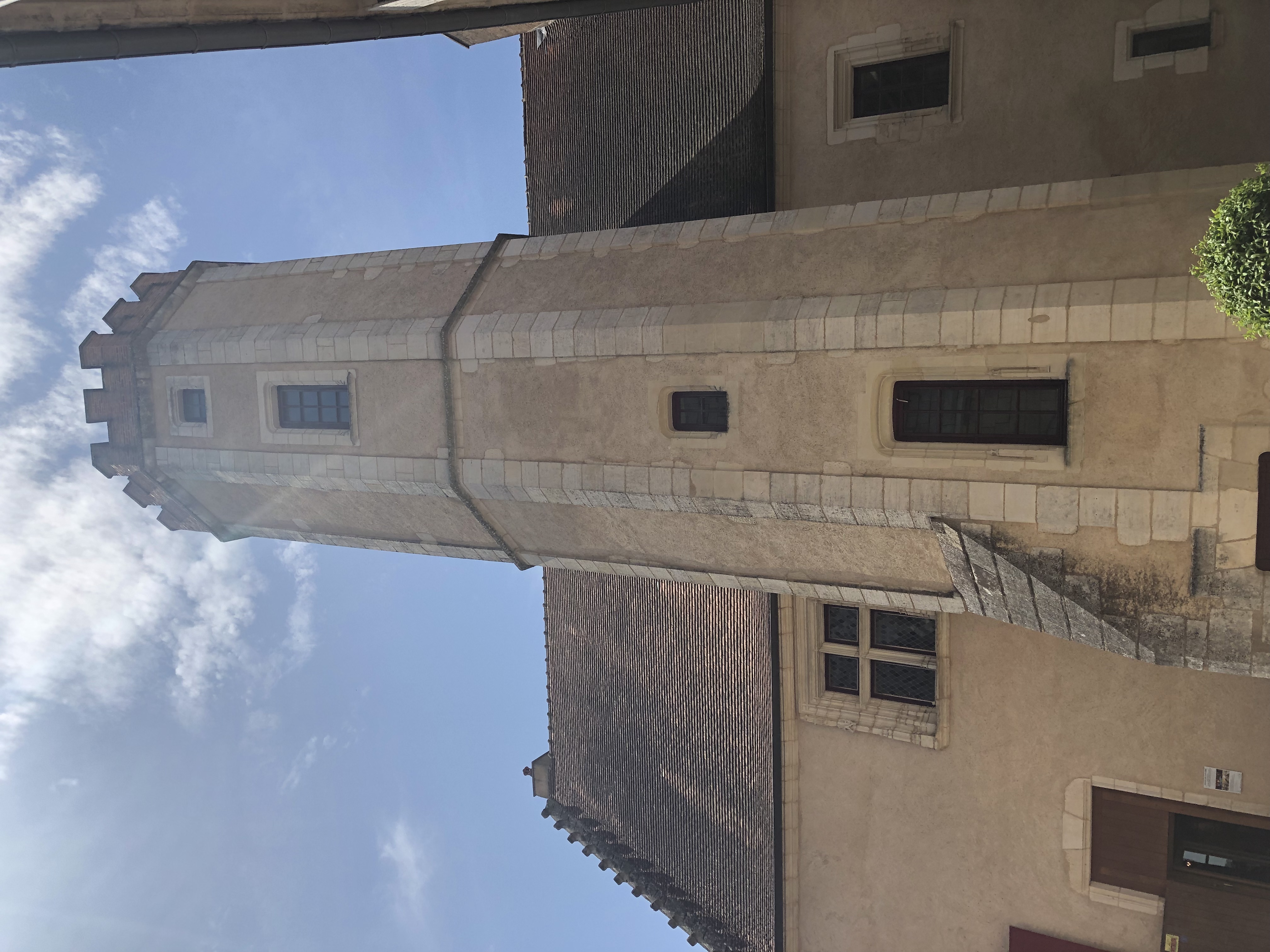 After an afternoon cooling off once again in the pool, and rescuing drowning ladybirds, we returned to the centre for our evening meal. As we were walking back uphill we became aware just how hot it is in central France at the moment – stiflingly so.

The forecast for today and for the following two days was for temperatures of between 38 and 40 degrees Celsius. We didn’t even encounter such temperatures last year in Sicily, so we decided that we should alter our approach to these few days. The peak temperatures seem to occur in the late afternoon and early evening, so, forsaking our usual habit of getting up as late as possible, we decided that, for these four days only, we would try to do all of our cycling in the morning, making an early start in the cooler temperatures.

With this in mind we set an early alarm this morning, had a small swift breakfast, and readied ourselves for departure. I went to perform the usual tandem maintenance, and discovered that the back tyre was completely flat. This was not what we needed today, frankly, as it would delay our departure, and the process of changing the inner tube would have to take place outside in the hot sun. There was no alternative, though, and the process went quite smoothly, taking perhaps half-an-hour (the puncture, a slow one, was tricky to find until the Stoker headed inside and asked for a bowl of water).

Finally, a good forty minutes later than planned, we set off down the same hill we climbed on our way in, somewhat faster, passing the signs for Chavignol, whose inhabitants make a particularly fine goats’ cheese. 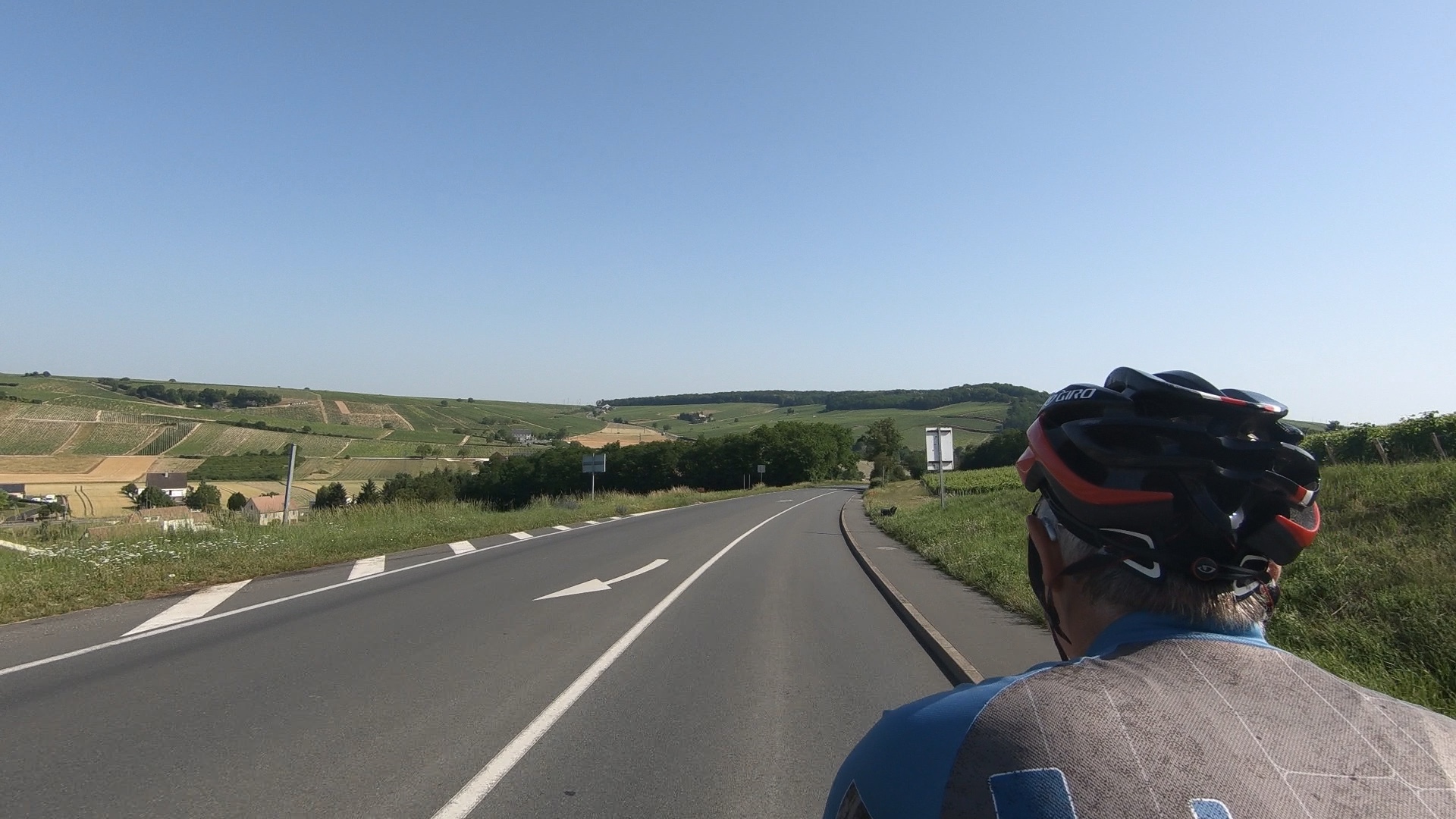 We made a brief stop at a bike shop at the bottom of the hill to buy a third bidon, so that we could carry more drinking water, and then headed north out of town. Spotting that a driver was about to emerge from a side-road on the right without looking first, I yelled to attract his attention. Clearly he didn’t like this, as he followed us for a short while, muttering imprecations. He should have looked where he was going, then…

Soon we dropped onto the canal towpath once again, and it proved to be an excellent start, as trees to our right provided dappled shade, making us feel much cooler. 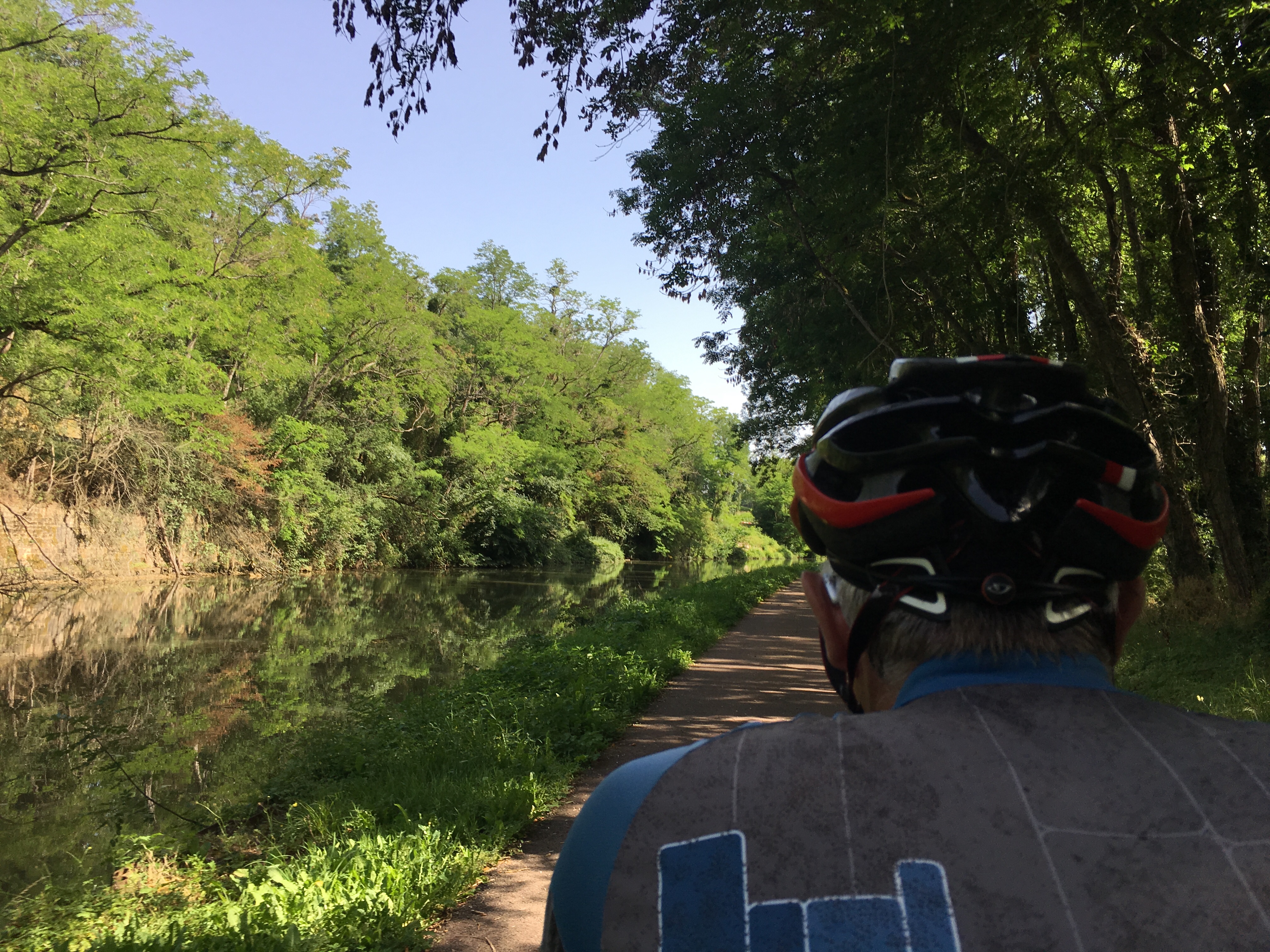 This continued for several kilometres, allowing us to build up a good speed and make significant progress in the first hour. To our right, mostly out of view, was the Loire, to our left the canal, and, after we moved from the towpath to the levée, directly ahead was a massive nuclear power station. On reaching this we pulled into a shady spot to have a drink and a rest, having completed the first twenty or so kilometres. 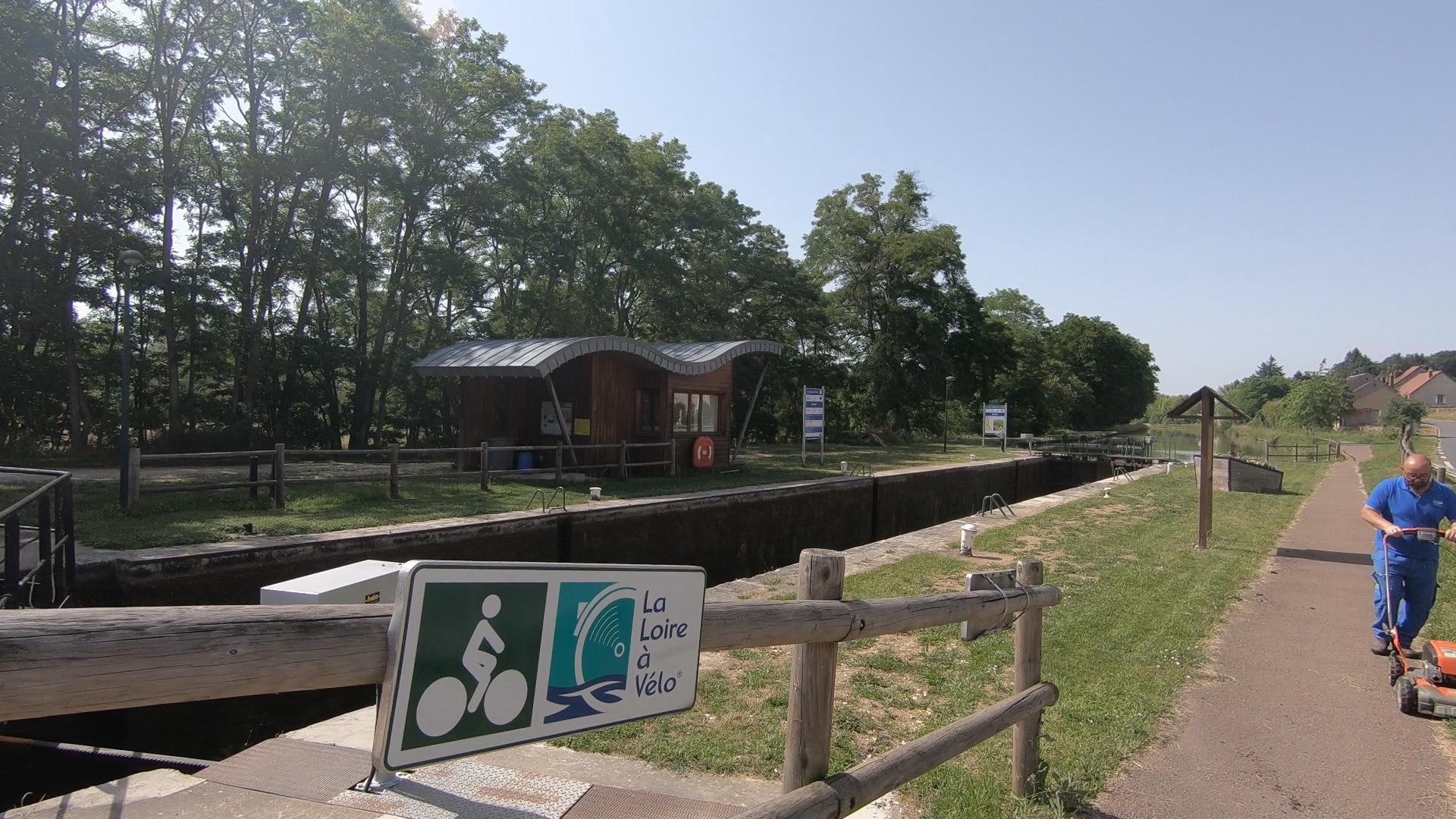 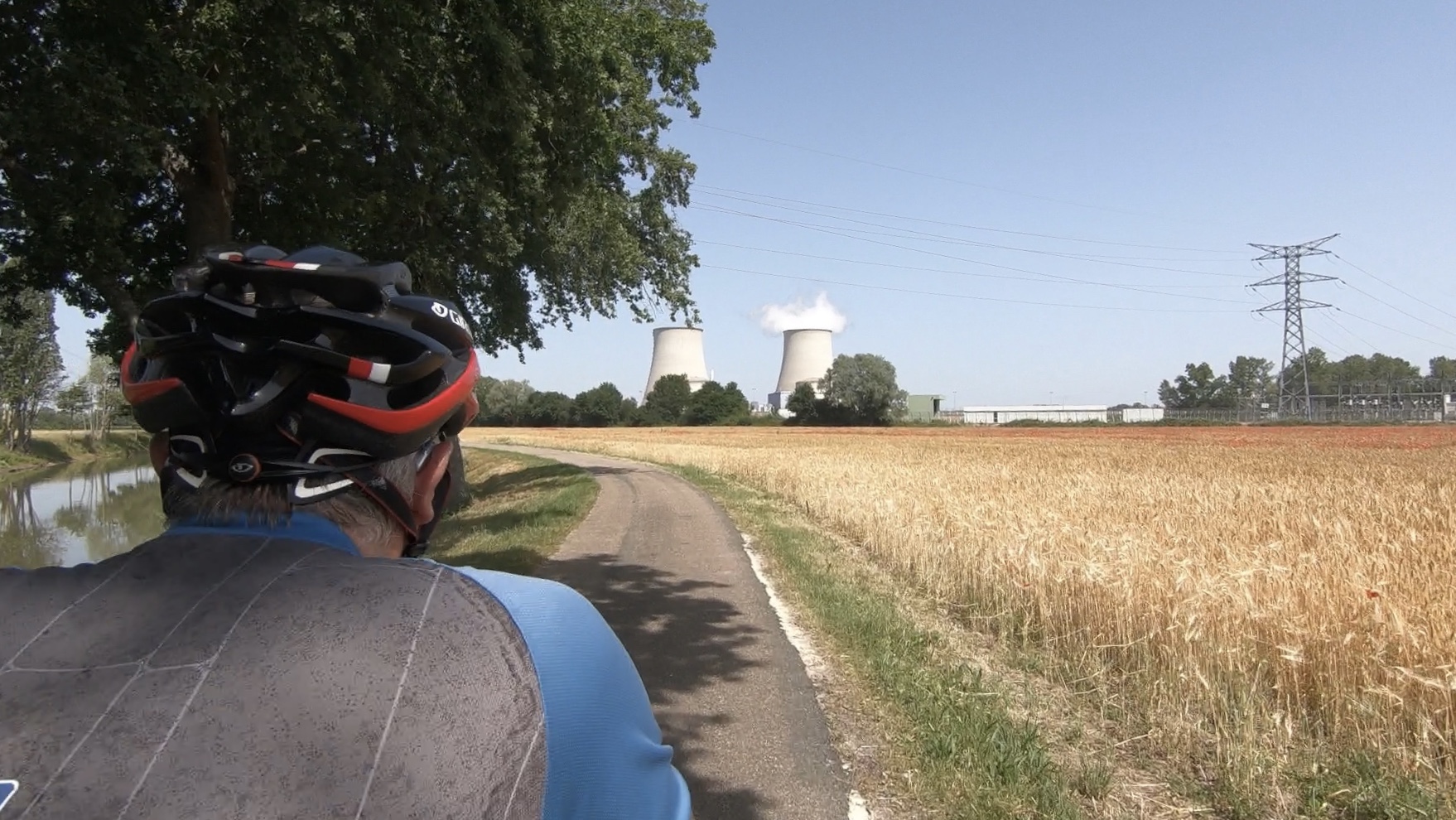 On setting off again, I noticed the (rather flat) remains of a snake on the towpath, clearly run over by a vehicle. So now we have seen both the snake-eating eagles and a snake. The second hour provided us with a rich variety of surfaces – beautifully smooth reddish tarmac, lumpy black tarmac, stark white chalky gravel, cobblestones, coarse gravel and finally grass. The last of these prompted a refusal from the Stoker, so we temporarily re-routed along a parallel road! 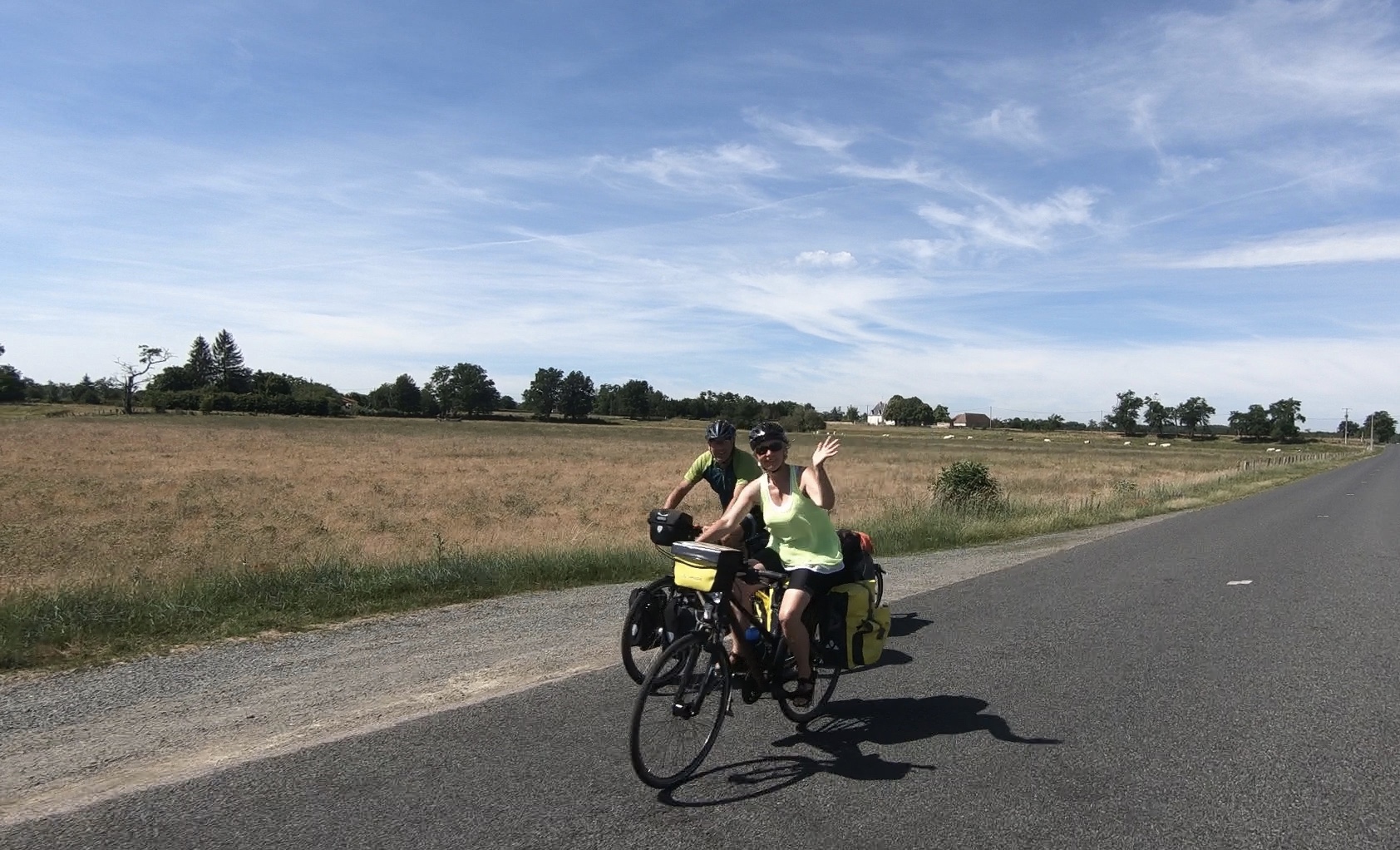 Later on, to our left was a field of sunflowers, not yet opened, or so we thought, until we looked a little more closely. 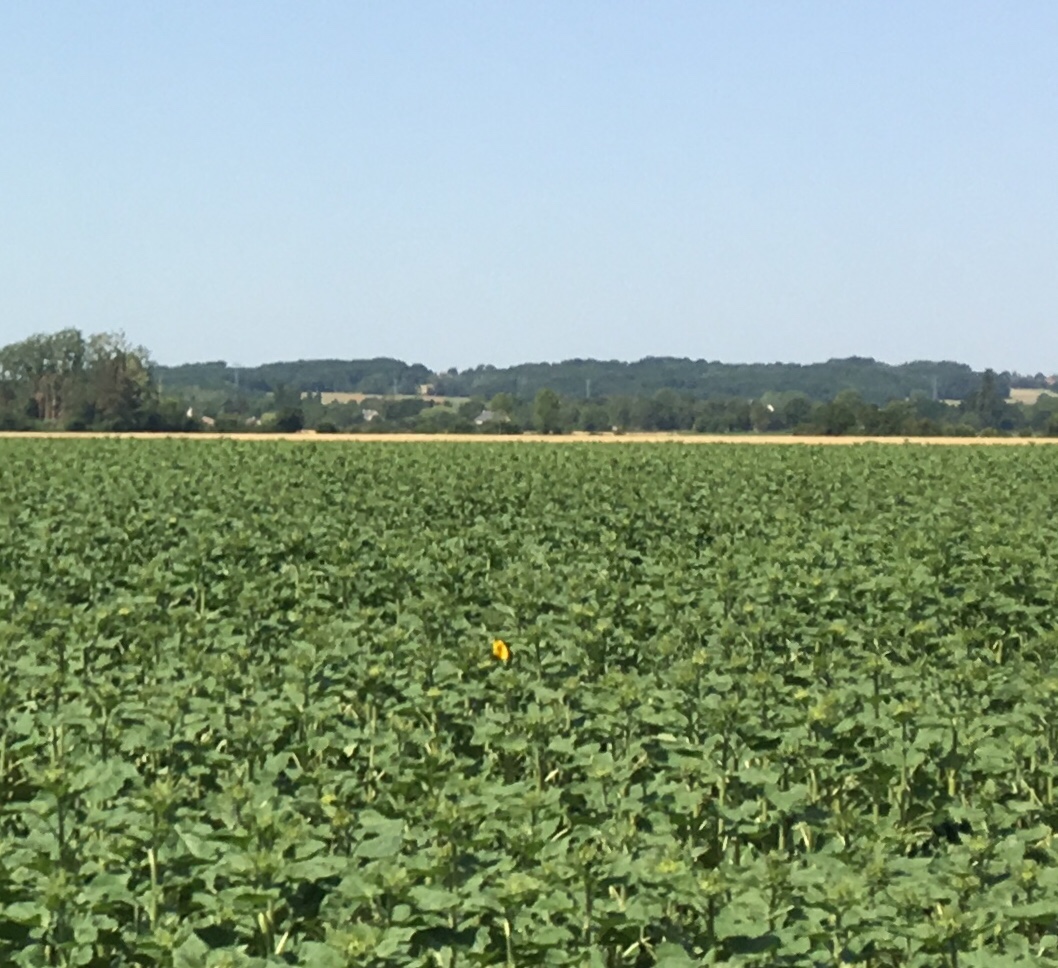 It was, of course, becoming hotter all the time. When we were moving along it felt fine, as we were generating our own cooling breeze, although sometimes the breeze felt like a hot hairdryer. When we stopped, however briefly, we became much more aware of the temperature, and were grateful that we had decided to cycle only in the morning.

The last approaches to Briare were in a maze of waterways – pools, river channels and canals, some disused. On our right we spotted a coypu making steady and serene progress through the waters of an abandoned canal.

The cycling was slow-going, not so much because of the temperatures as the uneven surface of the towpath. Soon enough we spotted the outskirts of Briare, and headed towards the town centre.

Our first impression is of a strikingly handsome town, with a beautiful church, its façade inlaid with fine mosaics, a fine town square and canals heading off seemingly in all directions. 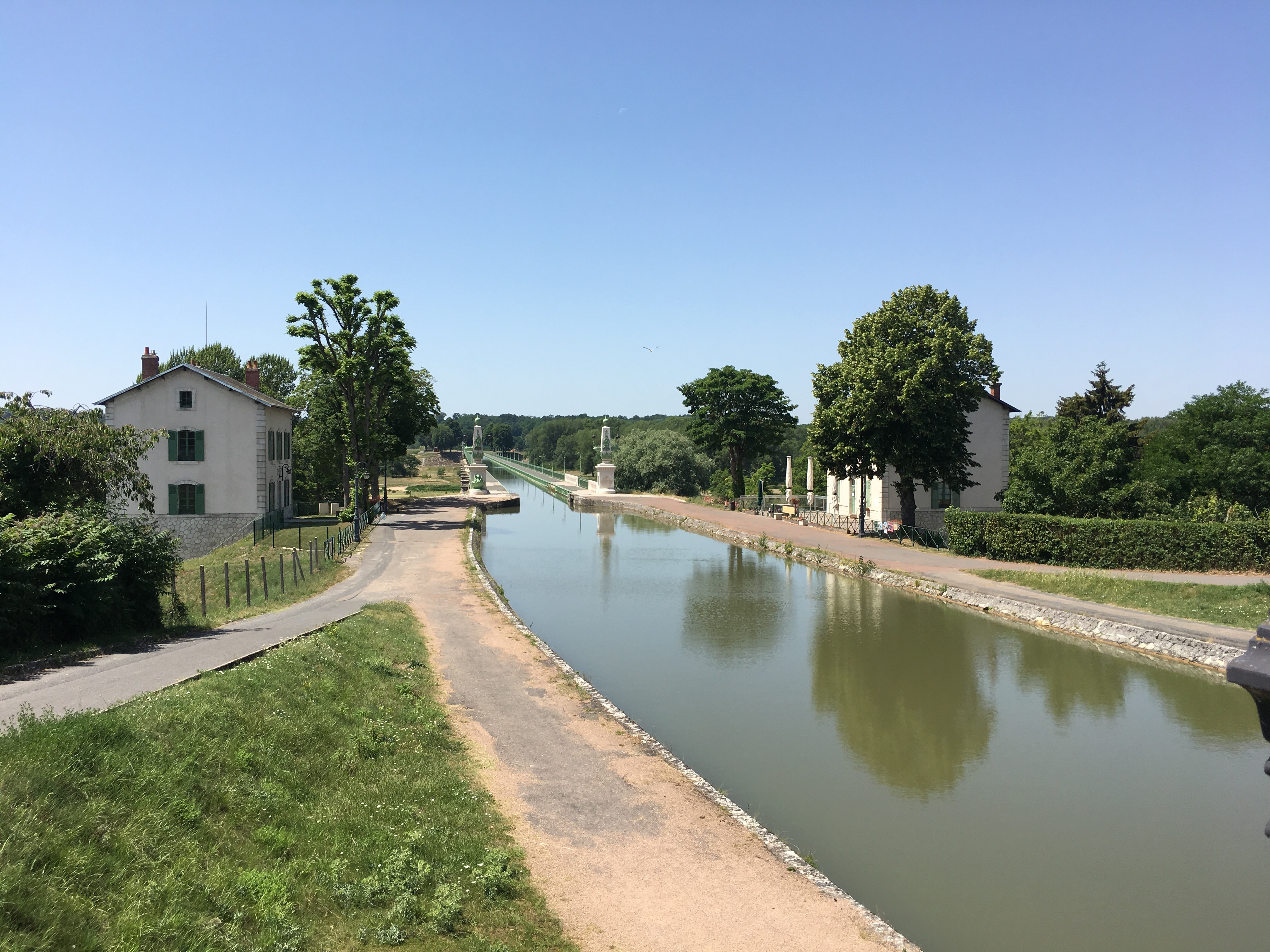 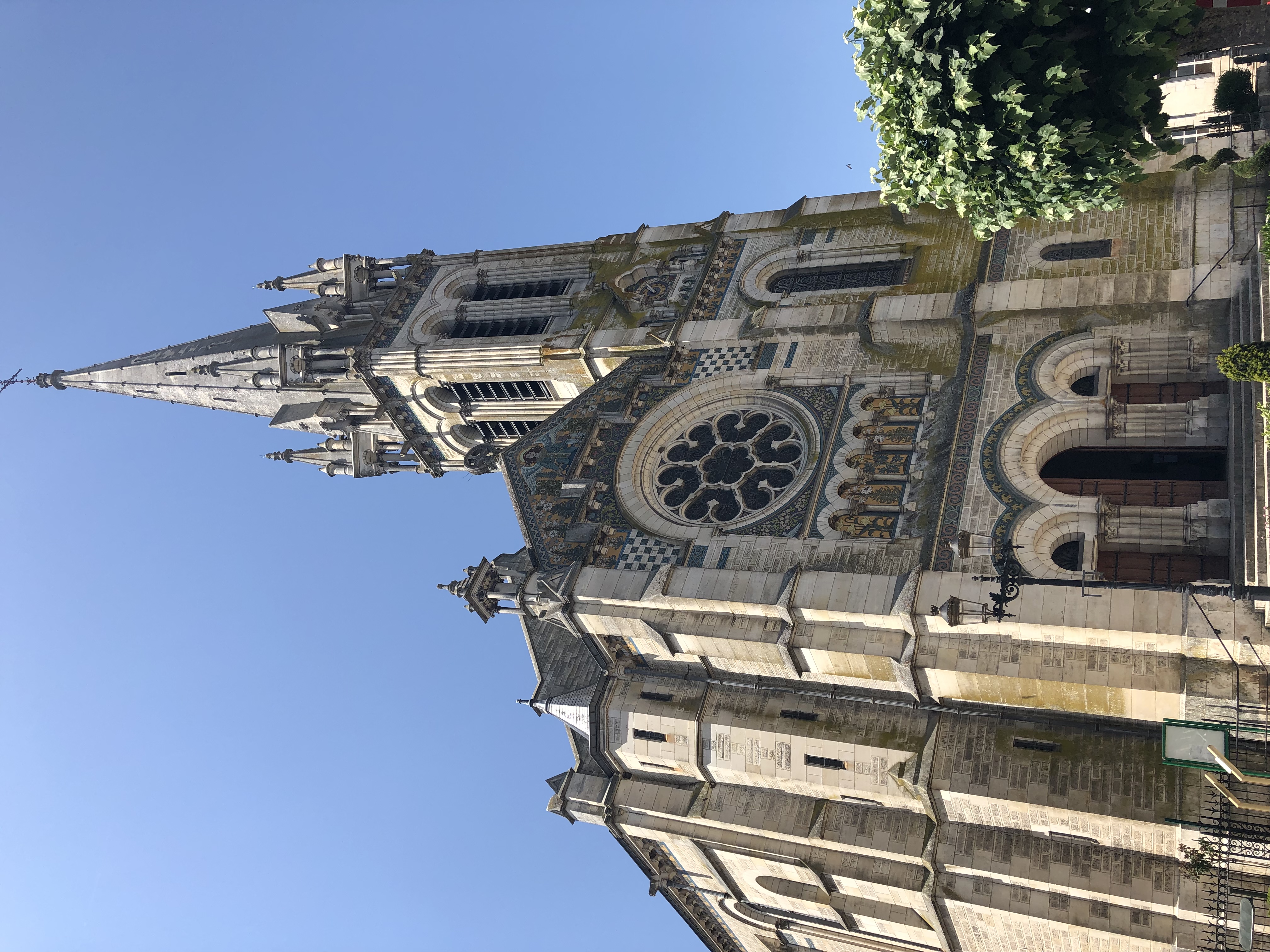 Before locating our hotel we stopped off for lunch (and copious quantities of soft drinks) in the square. We also took the opportunity to reserve a table at “Le Petit Saint-Trop”, a restaurant recommended to us by Simon and Dianne. It looks very promising.

Tomorrow we plan to set off even earlier to Châteauneuf-sur-Loire, as we’ve arranged to check into our lodgings at lunchtime.