Our cabin in the campsite was fine, if somewhat austere. It used to be a municipal site, apparently, and still bears the traces of that. Some nice touches, though – you could order breakfast items to be delivered and pick them up at 9am. We already had coffee, and bought some milk in the little campsite reception, so we were all set.

The view of the river was lovely, and we walked over the bridge into town for dinner, marvelling at how much longer the bridges over the Loire are now. This one must have been twice as wide as the aqueduct at Digoin. 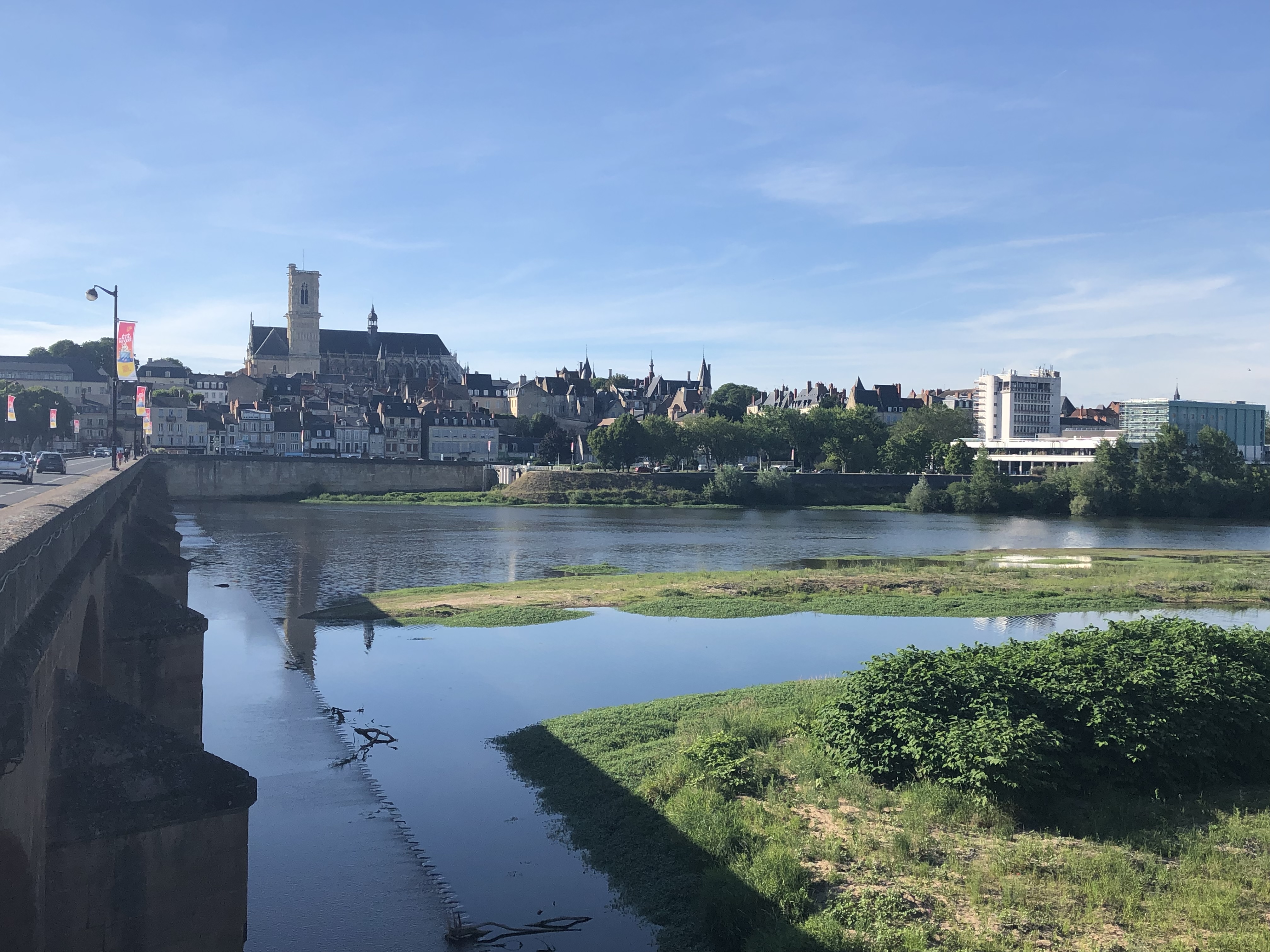 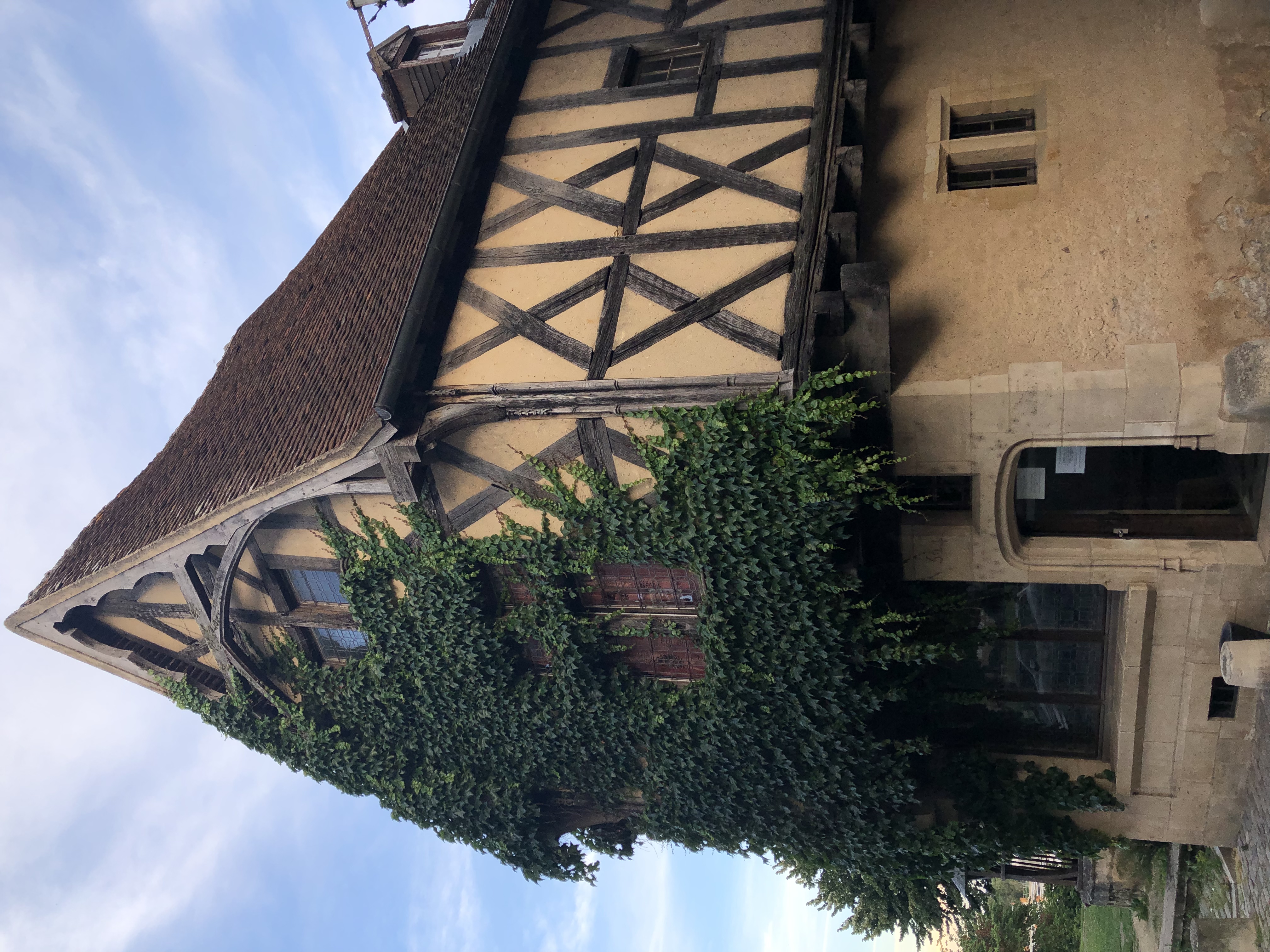 The cathedral was rather surprising. Outside much of it is scaffolded, as it’s being cleaned and restored, but the parts which have already been completed are looking very bright. Inside, it has a collection of stained glass windows which have been described as ‘startling’, and so they are. The cathedral sustained considerable damage during the Second World War, and it was decided to create new, modern stained glass windows to replace the originals. Some are lovely, abstract designs in simple colours. Others are really very weird, almost laughable. À chacun son goût, as they say around these parts. More information here and some professional pictures, if you’re interested. 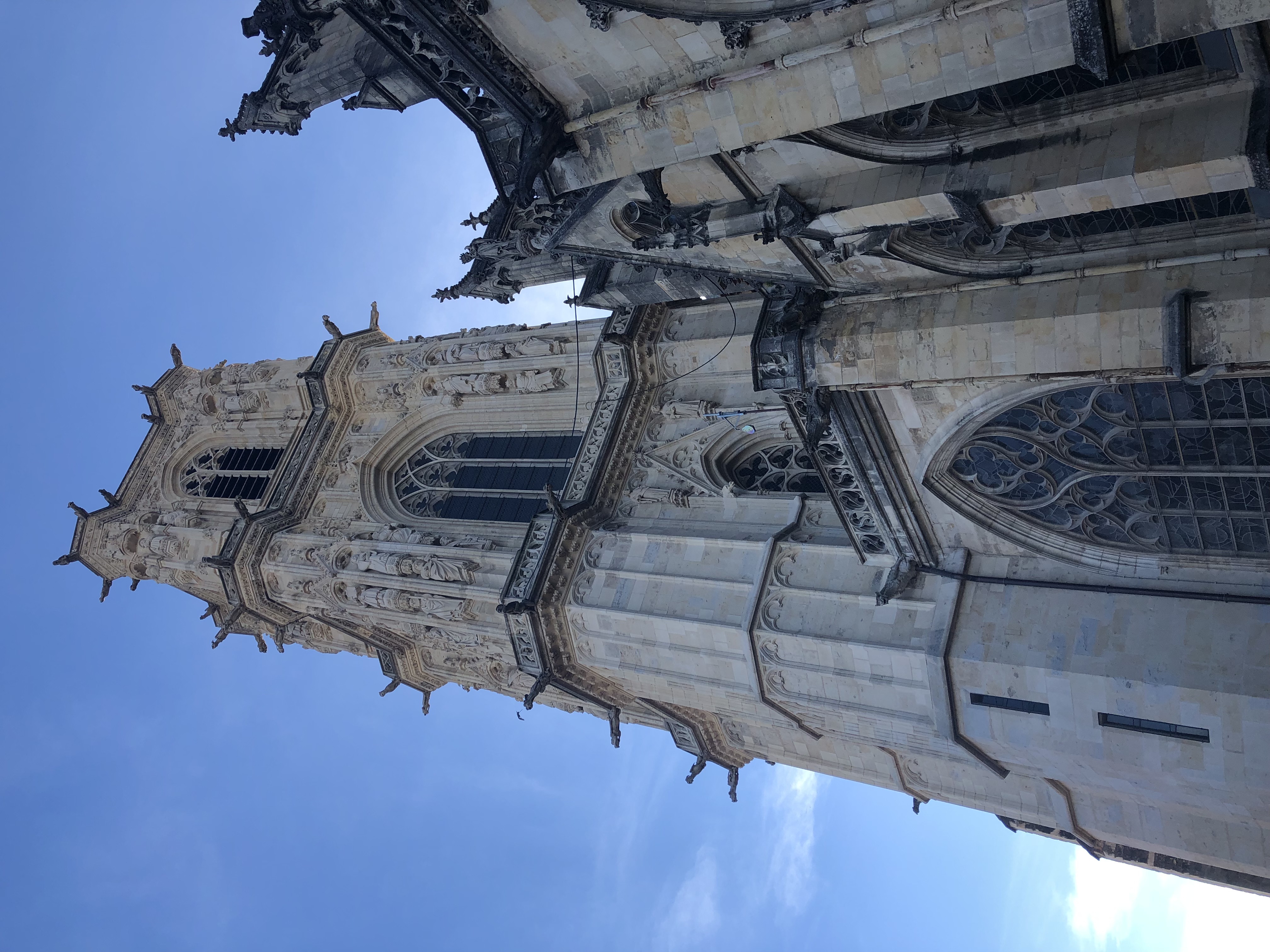 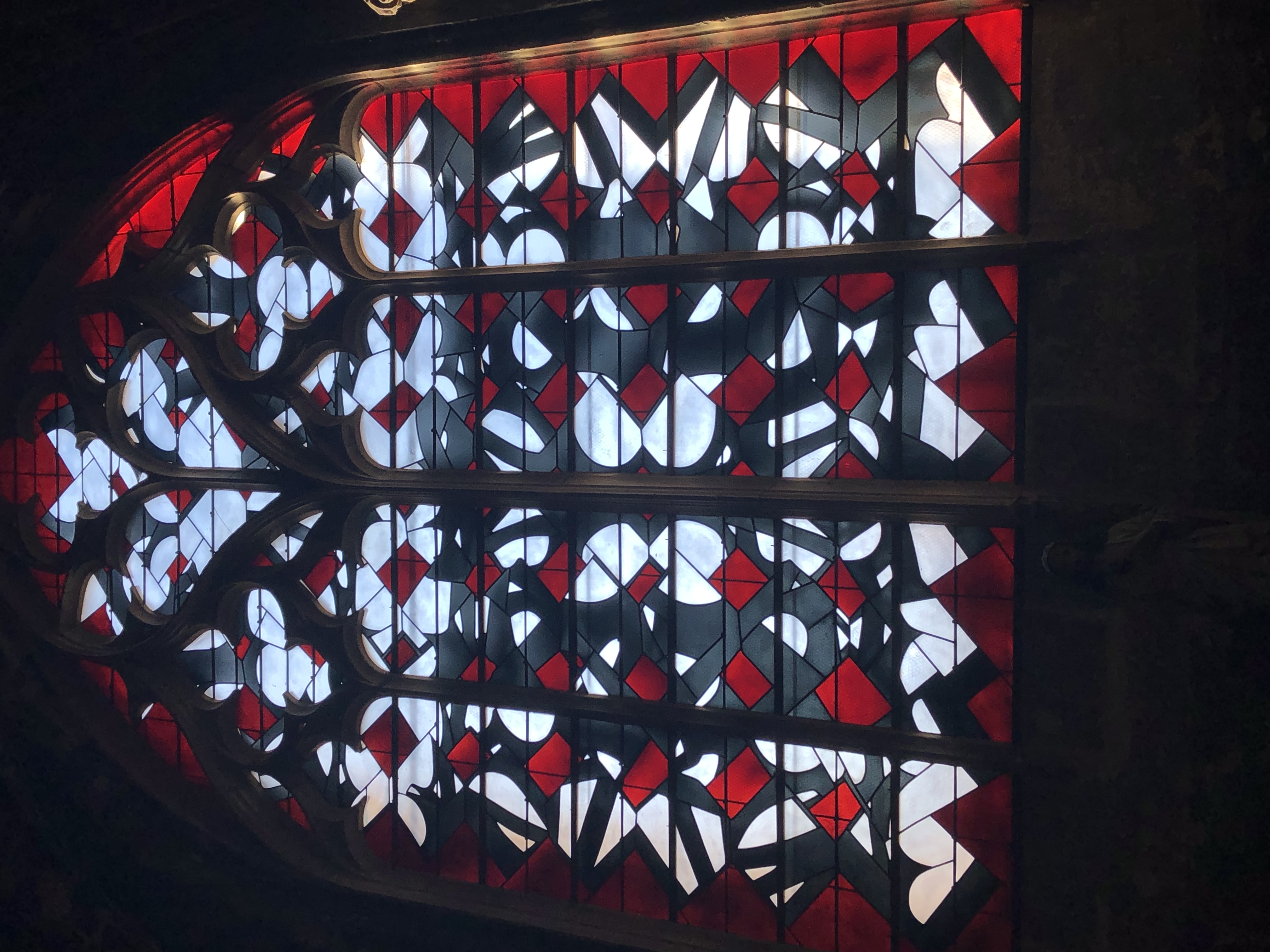 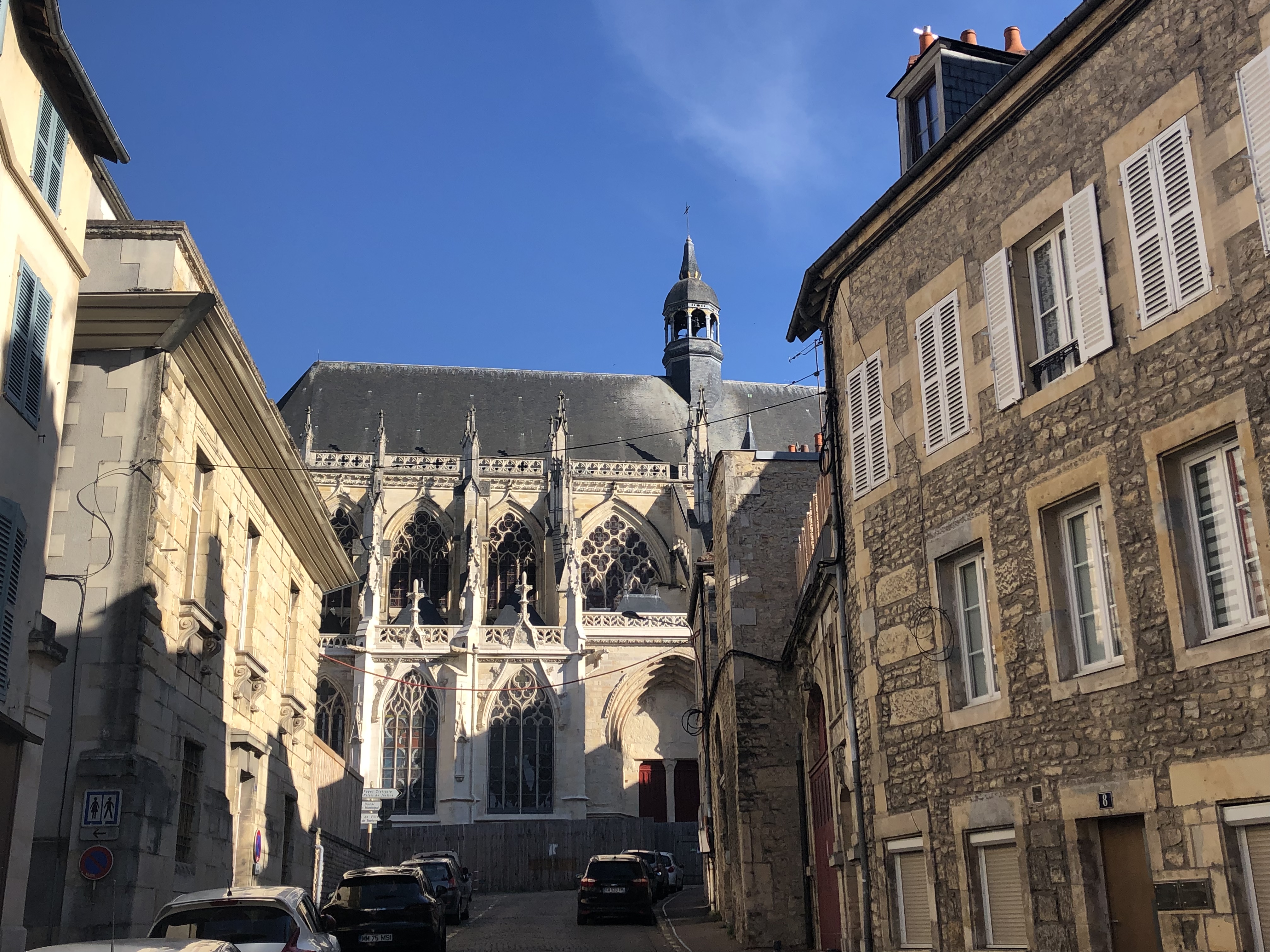 We had a little wander around the quiet streets, and found a restaurant for dinner, sea bass for the Stoker and an escalope for the Captain. We were a little too early for sunset as we walked back across the bridge to the campsite, but it had been a pleasant evening and we’d enjoyed being able to eat outside.

Today was to be our third official ‘start’ of this trip. The first was the section up the Ardèche Gorge and into the mountains to find the source of the Loire. The second was the initial stages following the ‘baby’ Loire on an unofficial route we’d chosen ourselves. Today we would begin to follow the Loire a Vélo official cycle route, from Nevers to the sea.

Well, we thought it started in Nevers, and had downloaded all the official routes to Jack the Garmin so we could follow it exactly, but after exiting the campsite and turning confidently back towards the canal, we quickly realised we were far from the route. We plotted a way to get to it and set off, and after about five kilometres finally joined the official cycle path next to the canal. “How weird”, we said, “that the Nevers cycle path doesn’t start in Nevers”.

We cycled along the towpath, and then walked over another aqueduct crossing, this time of the Alliers river. 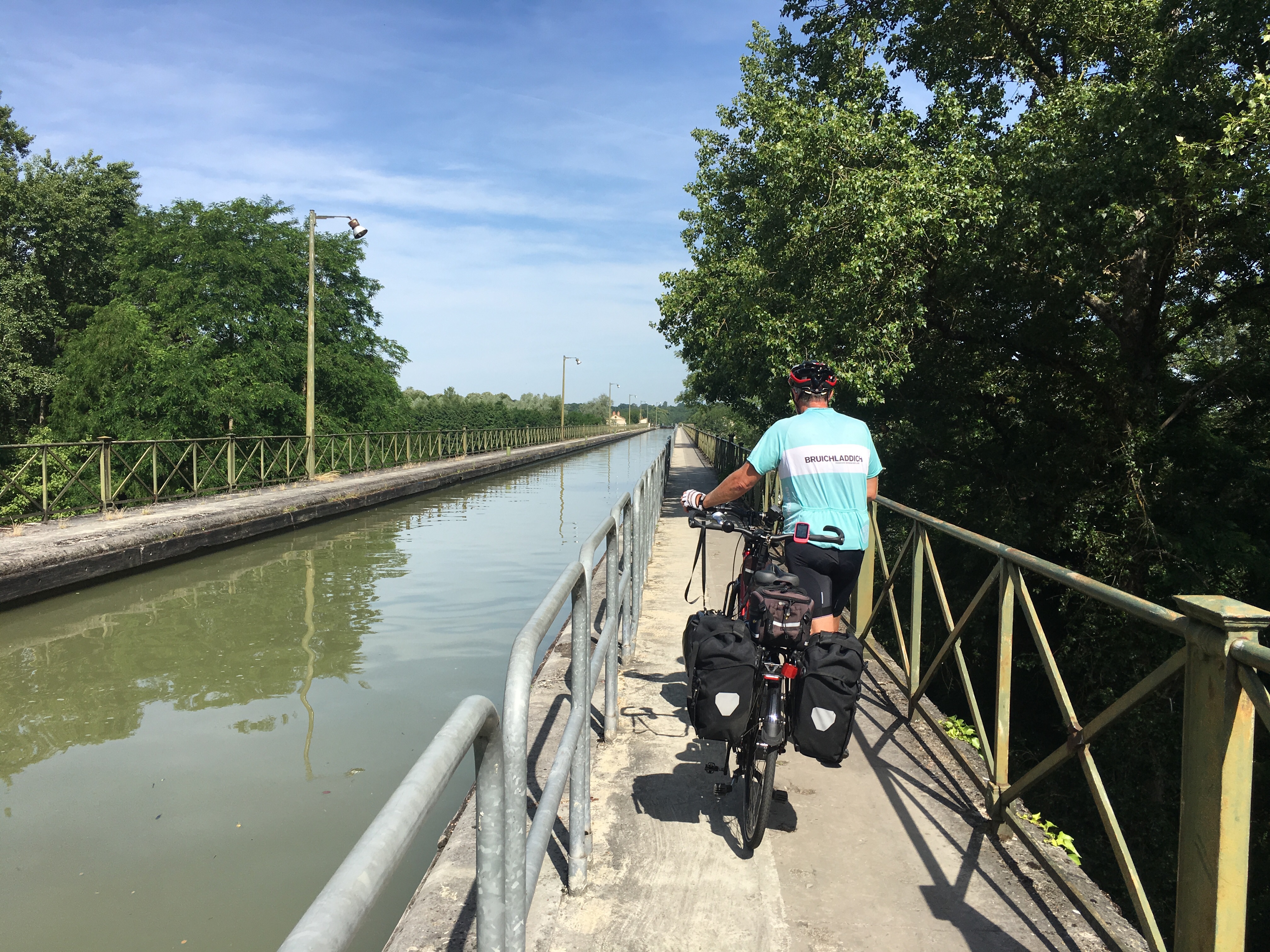 Lots of Little Terns were flitting about above the water, dipping in sometimes, presumably to fish.

At the official end of the canal at the Alliers river we turned on to the Levée de la Loire, and then suddenly, just before Cuffy, we came around the corner and there was the Loire, a trio of French cyclists and the Official Start of the Loire a Vélo, marked as Kilometre 0 with a big map and signpost. 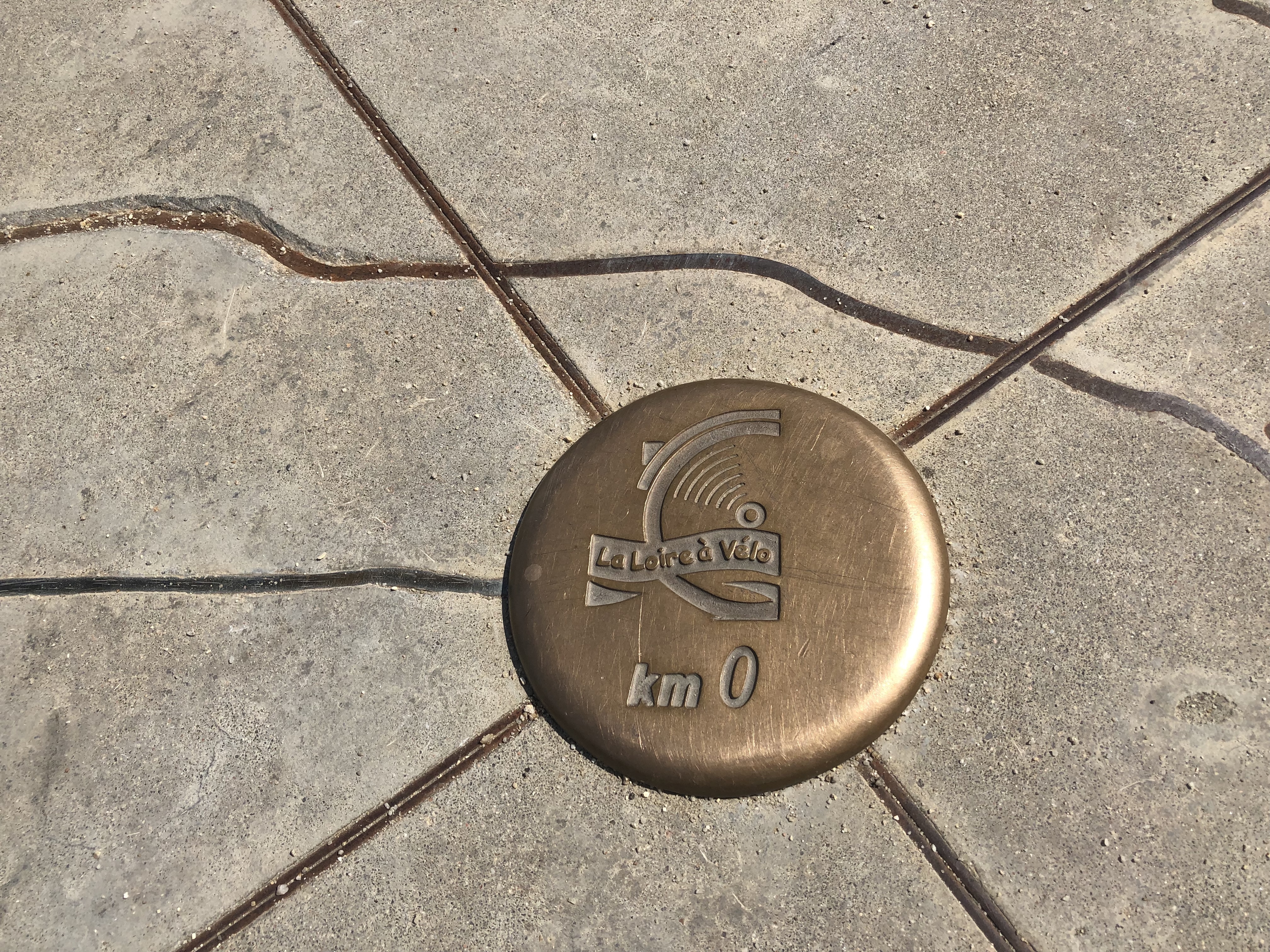 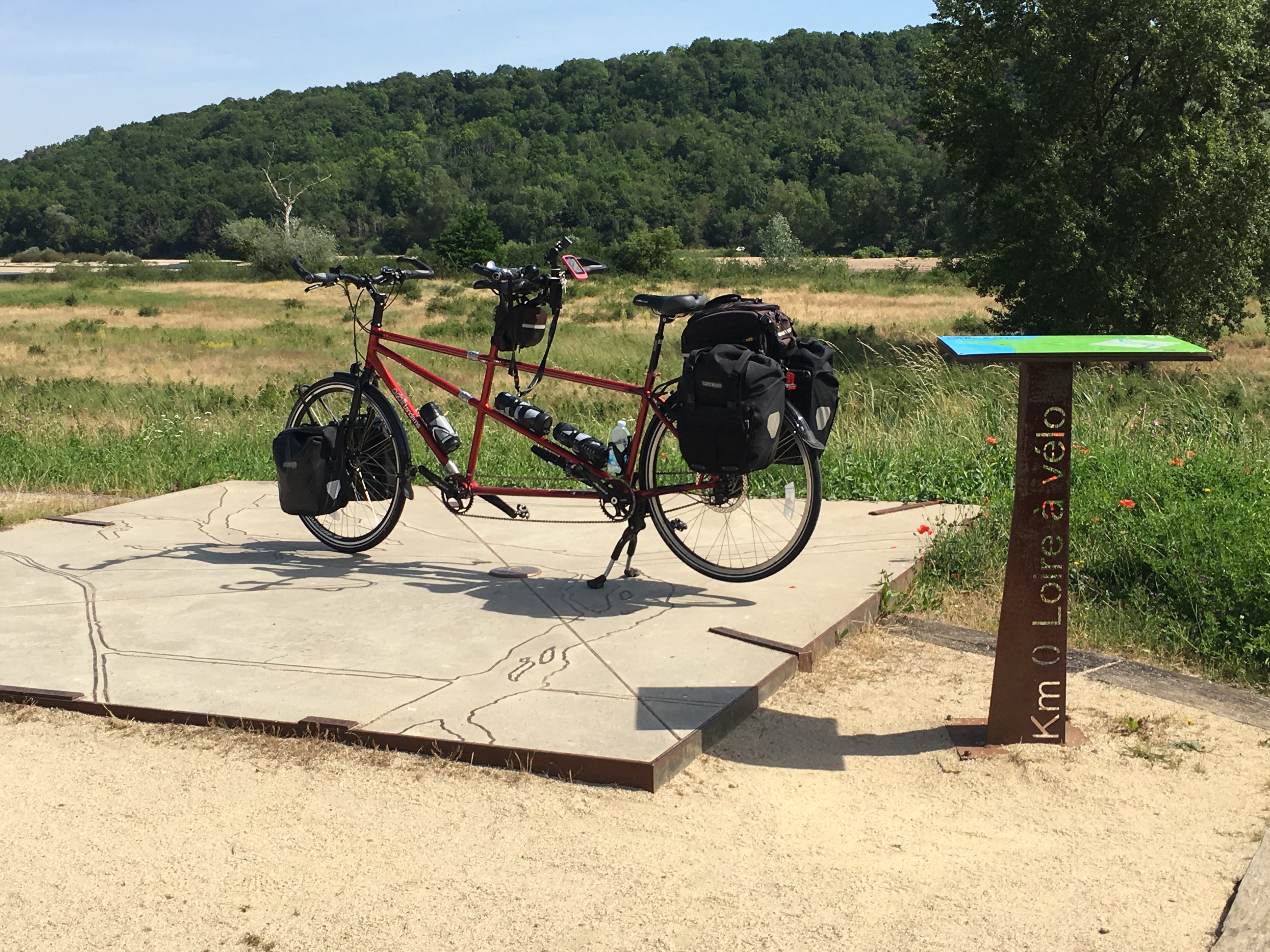 It was very exciting. We’d had no idea there was an official starting point – this explained why it wasn’t in Nevers! We chatted a little with the French cyclists, who were impressed that we’d come all the way from Mont Gerbier de Jonc – it was helpfully marked on the big map, or at least its direction and distance. 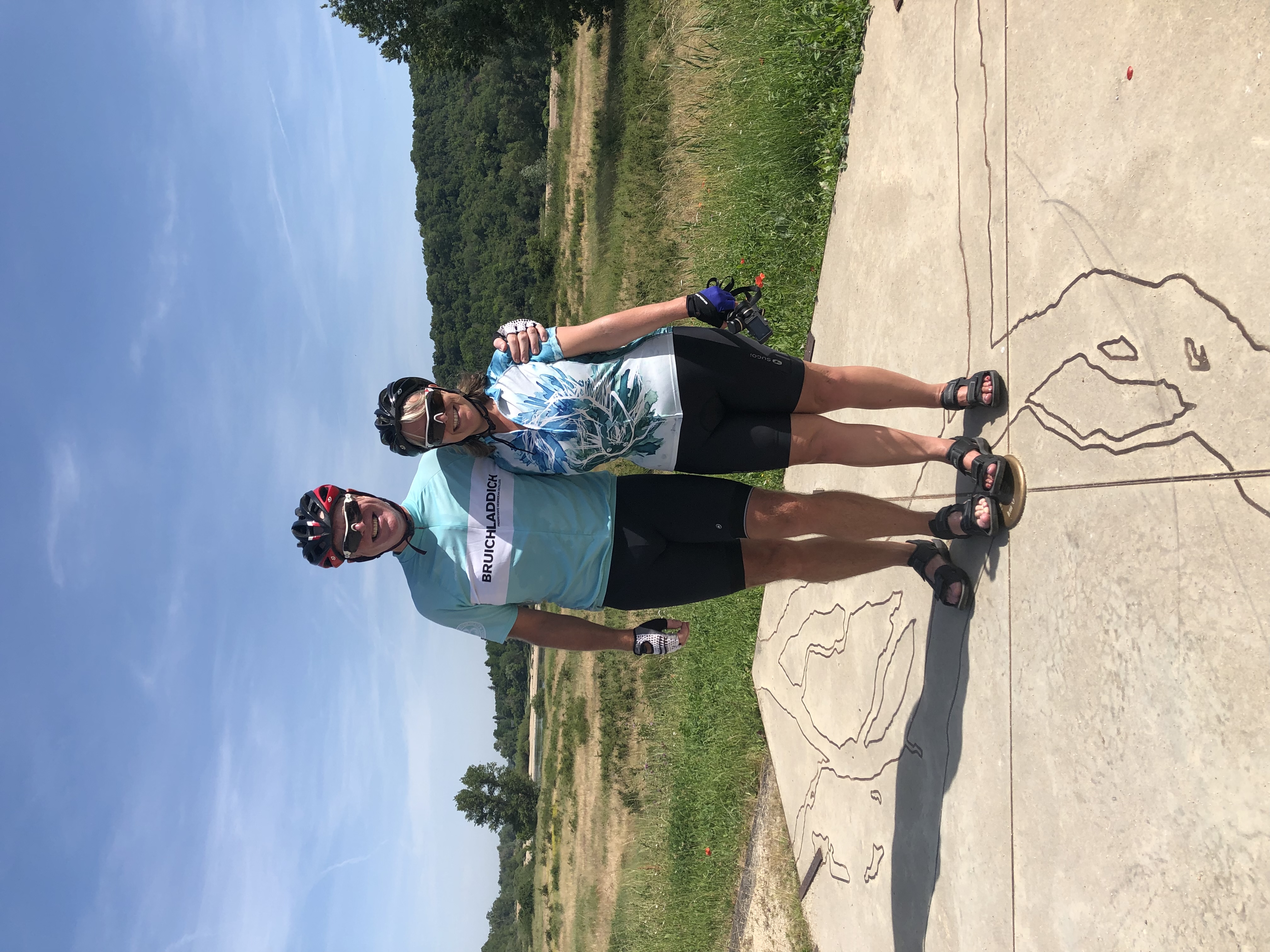 After official photographs with our feet firmly placed at Kilometre 0, we were off. The signage was really good, and the route mostly followed the levée, with occasional excursions onto the tiniest of roads where necessary. The Captain noticed almost immediately that every kilometre there was a circular button like we’d seen at Kilometre 0, but with the distance from the start inscribed, a bit like the metal shells along the route of the Camino di Santiago di Compostela (or Saint Jacques, as it’s known in France).

We twiddled along, eating up the kilometres, and really enjoying the sunshine, the peace of the levée, occasional views of the river and practically no traffic at all. No snake eagles now, but plenty of herons. 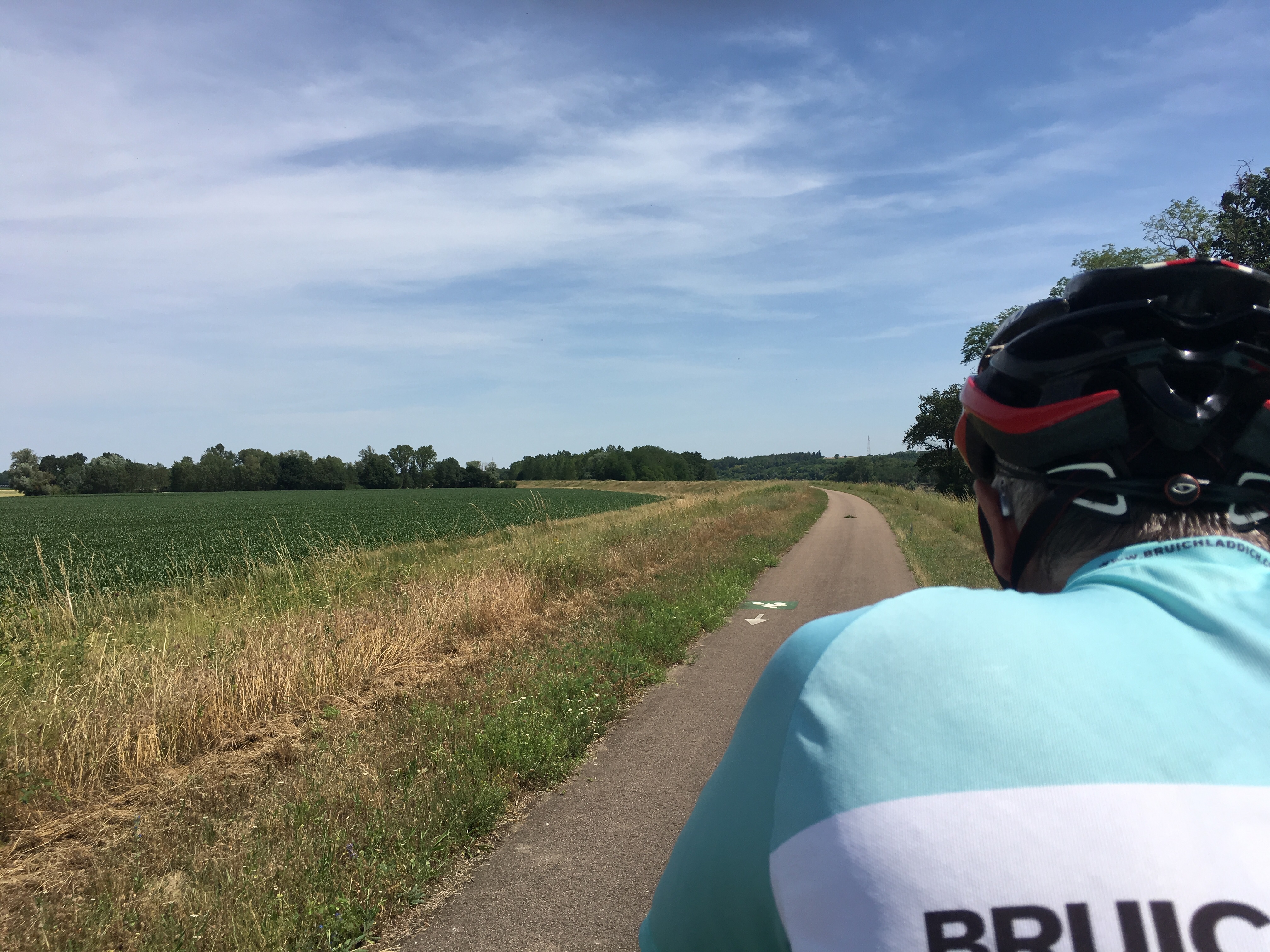 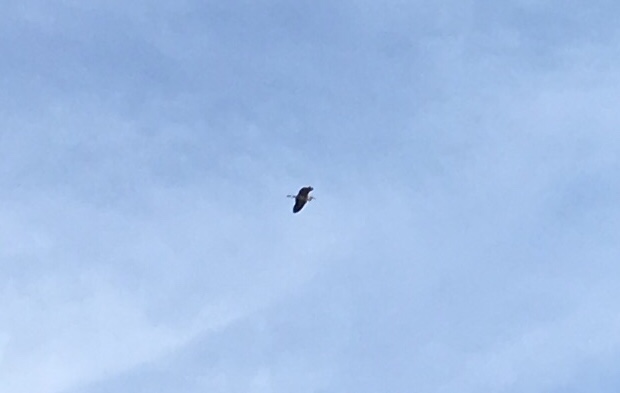 It was reminiscent of cycling along the argini of the Po in Italy last summer, except that the levées of the Loire were often ten or twenty metres from the riverbank, whereas the Po argini were almost always right alongside. 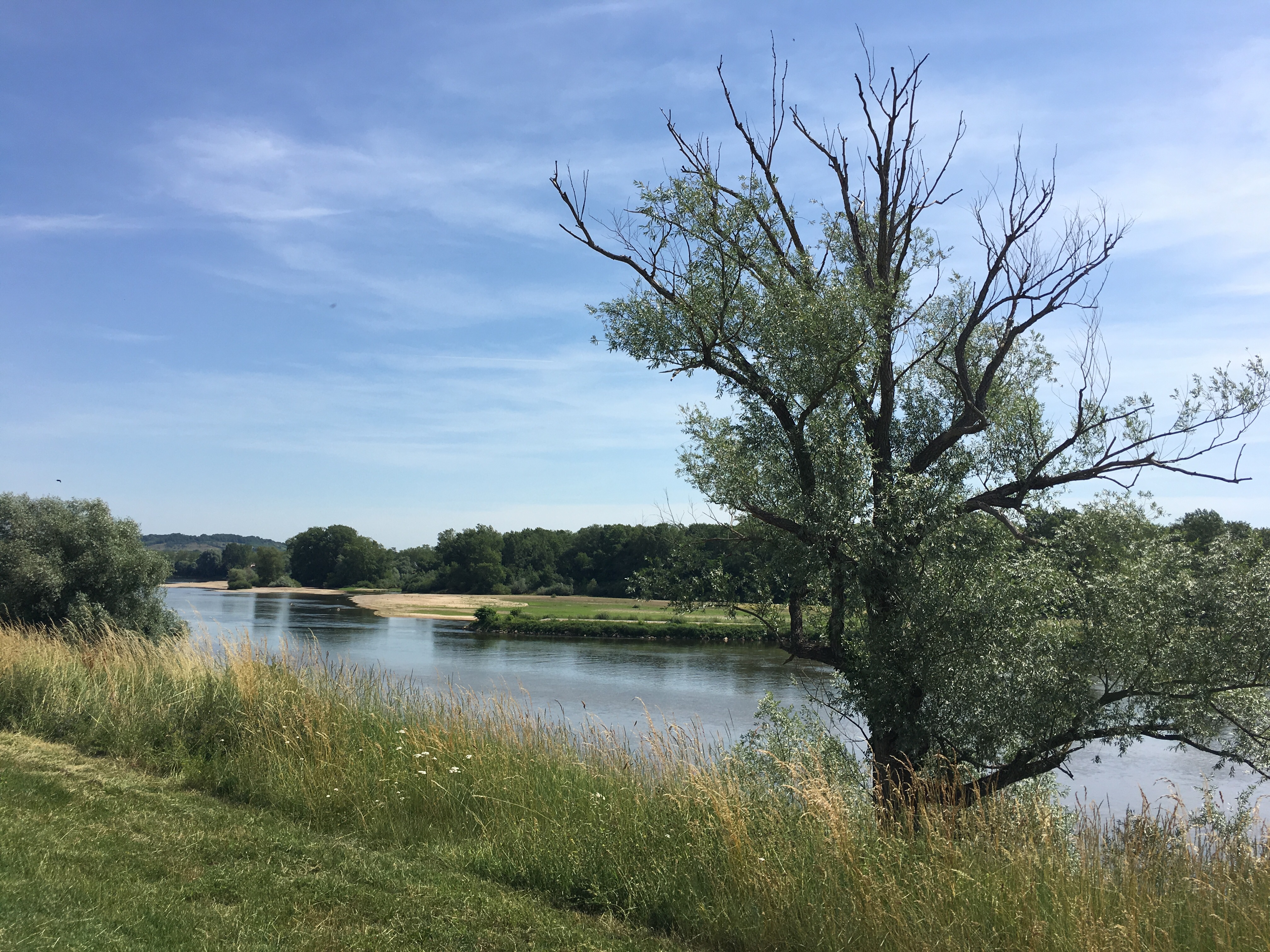 La Charité de la Loire appeared on the other side of the river, and we crossed the bridge to see the town and look for a lunch opportunity. It was a pretty little place with a ruined church inside which accomodation and offices were now located. We found a brasserie and ordered lunch, with copious amounts of water, much needed in the heat. 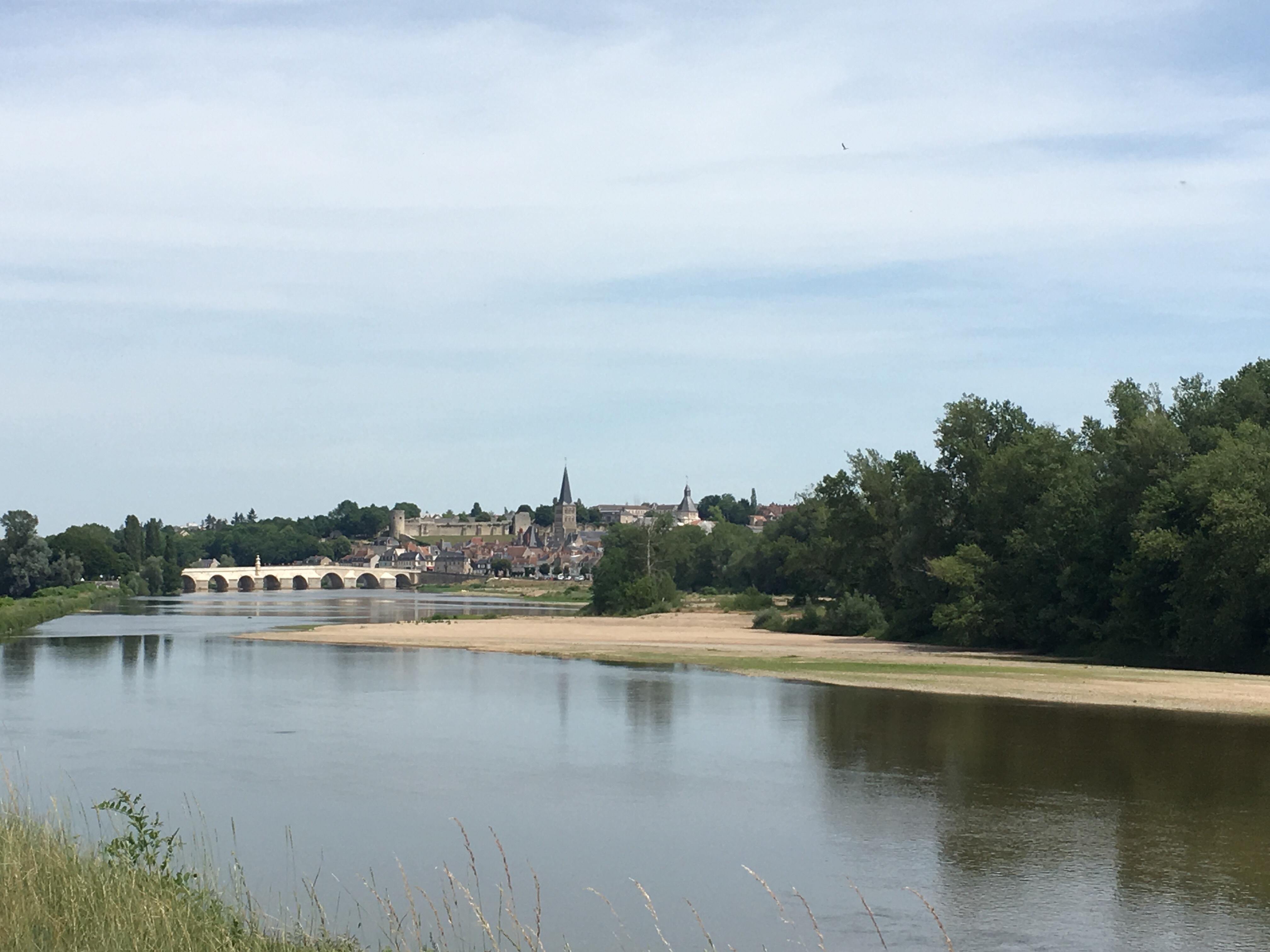 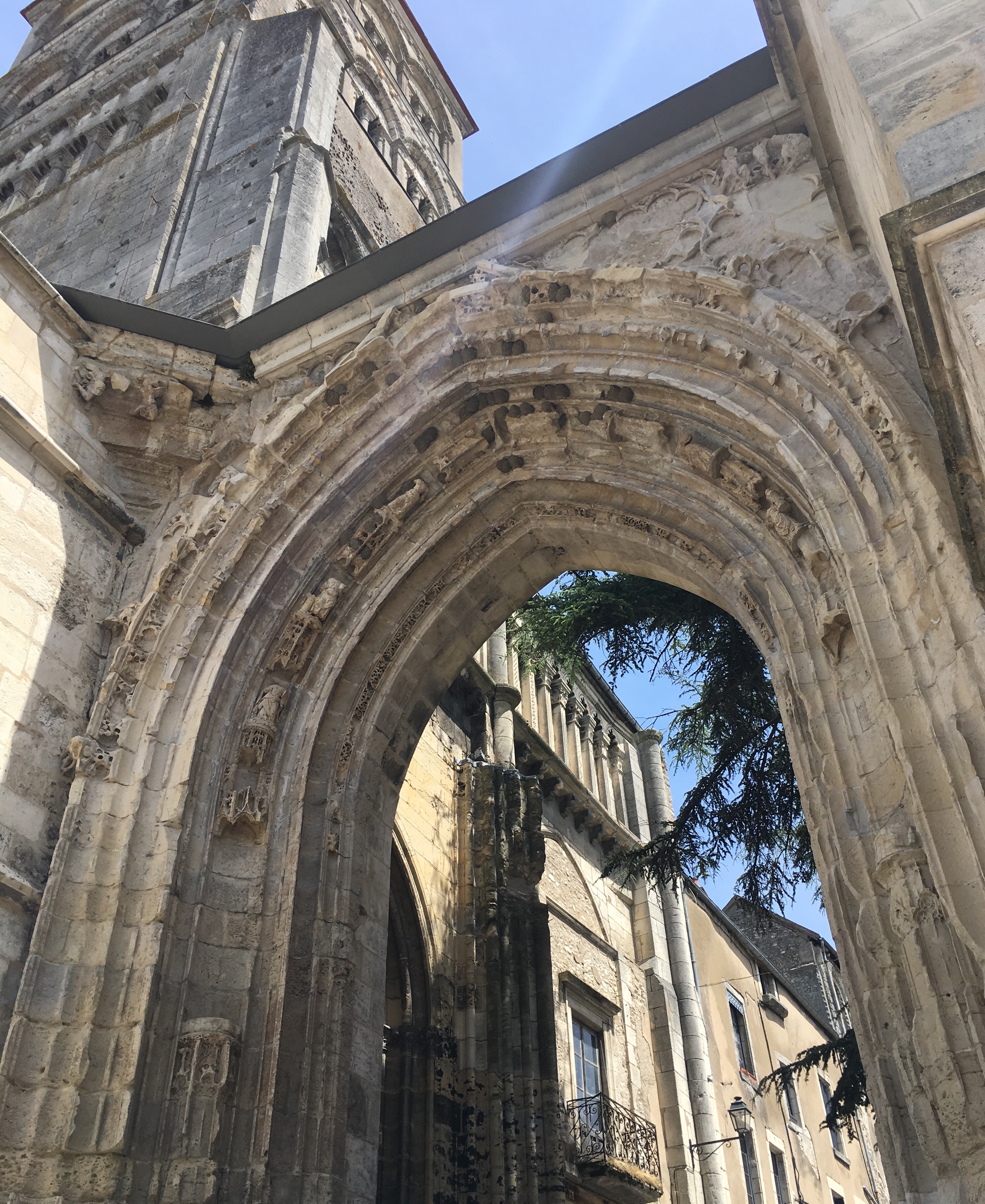 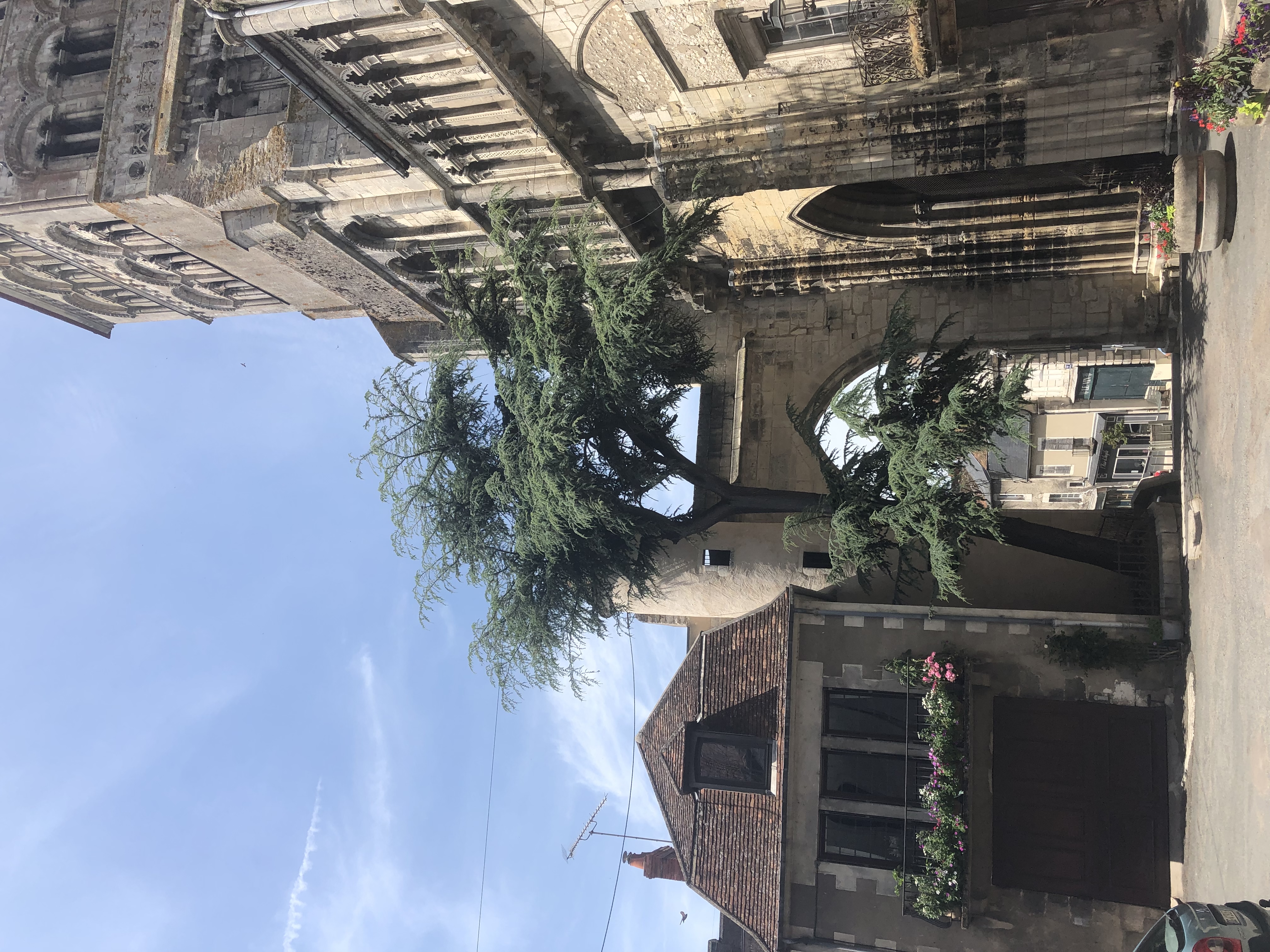 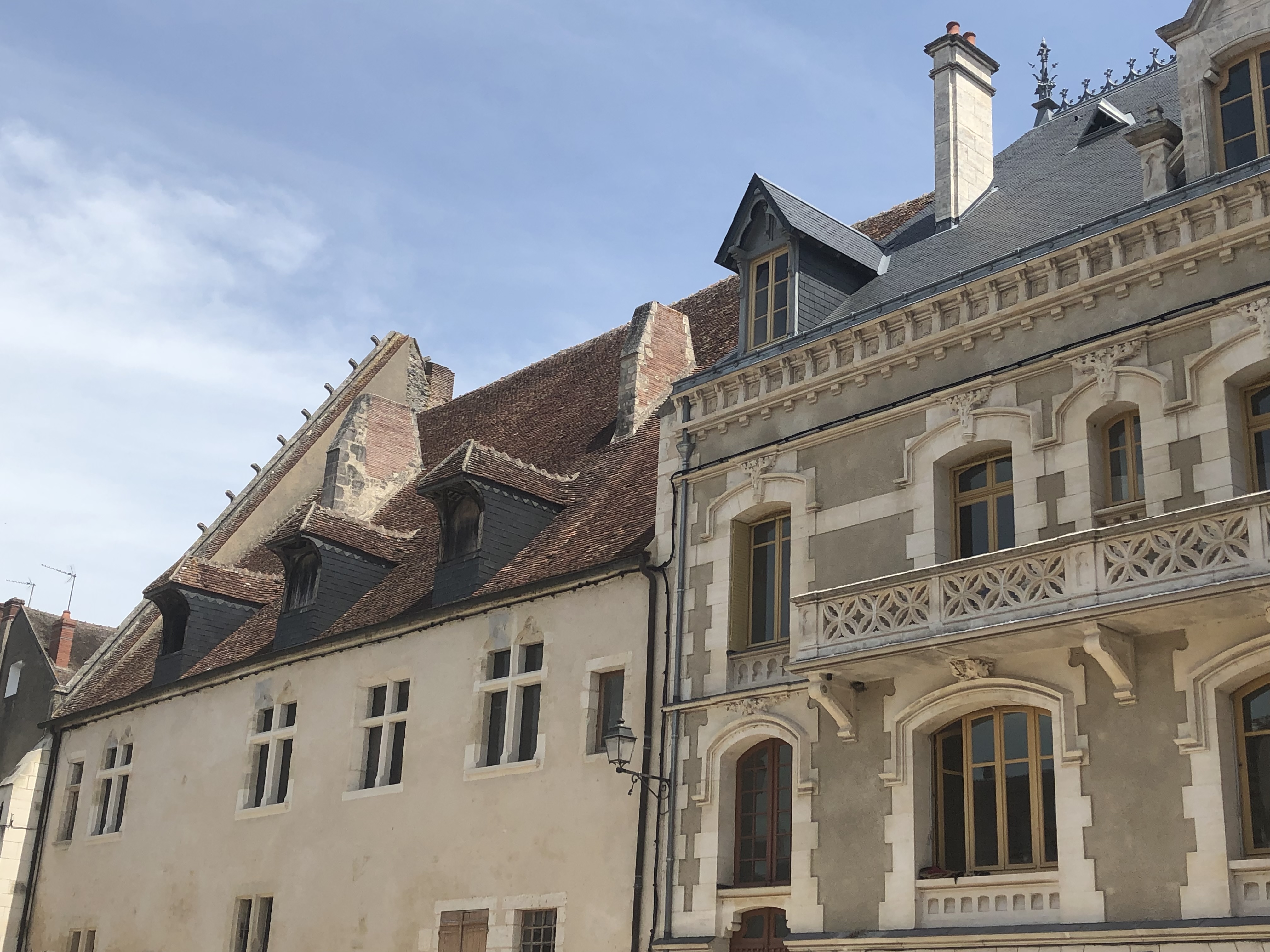 There was a party of touring cyclists eating their packed lunches at the brasserie’s tables, and they told us they were cycling by day and spending their nights on a barge which was accompanying them. It sounded lovely, and I pictured luxurious cabins, gourmet food and beautiful decks. “Is it nice, the barge?”, I asked. “No”, came the reply! It was a budget option, apparently, with bunk beds and little to recommend it, but they all seemed very cheerful nevertheless.

After lunch we recrossed the bridge and headed back along the cycle path, under thirty kilometres to Sancerre. It was fantastically relaxed, although we knew that to get into Sancerre itself our day would include a stiff final climb, since the town is atop a hill. 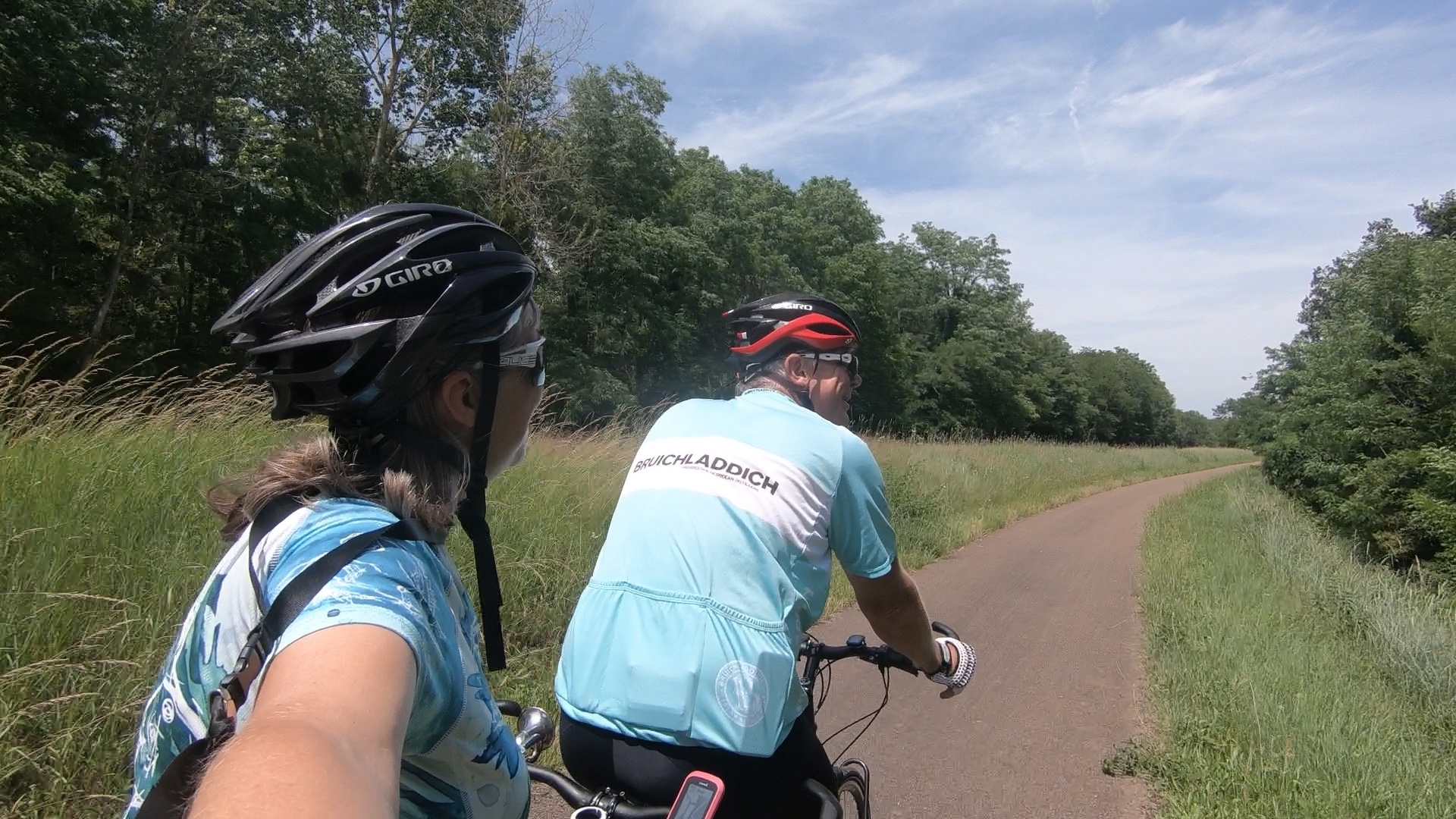 Finally we spotted vines, and the town on the hill, and we left the official route to head up the hill. 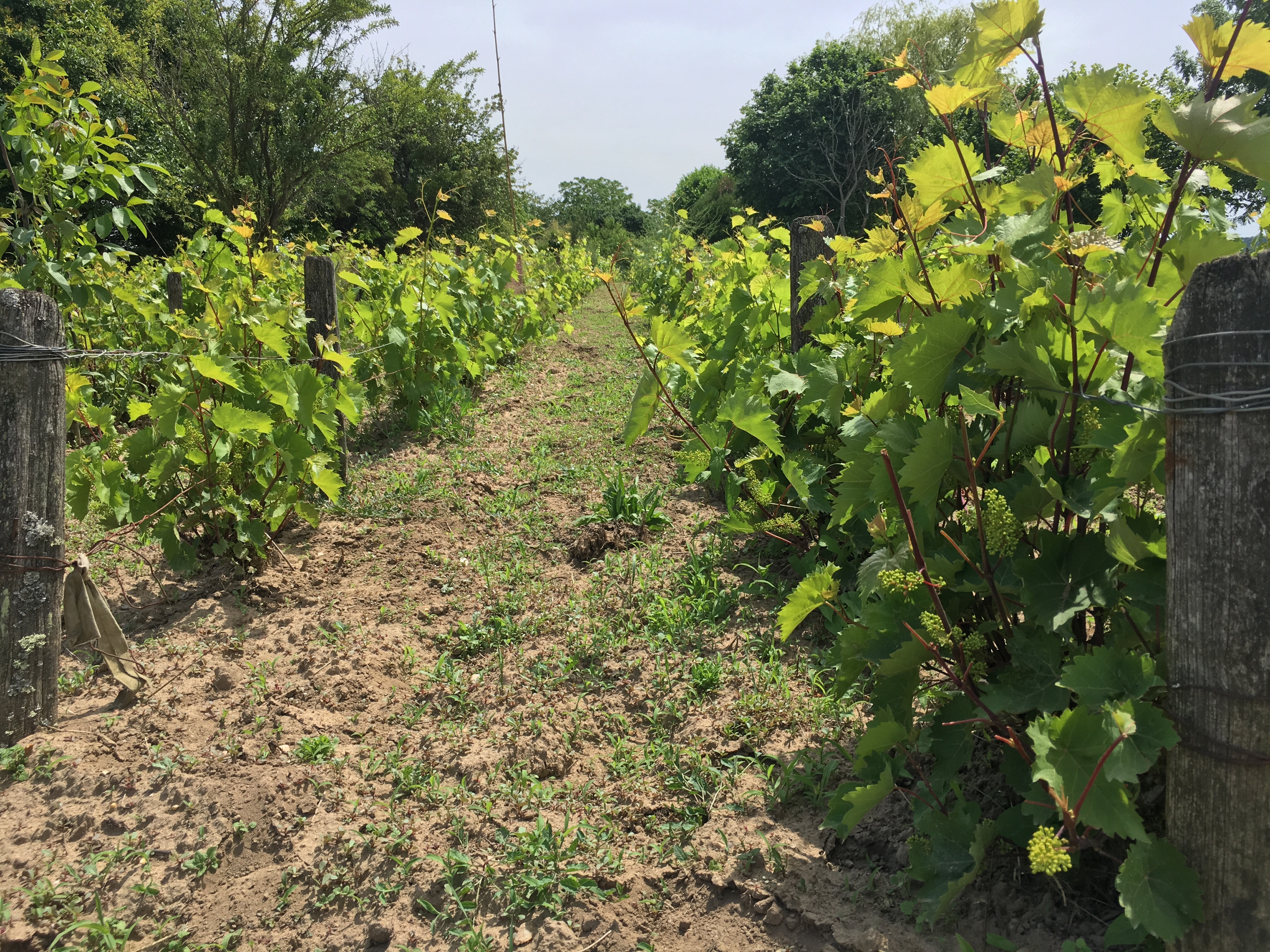 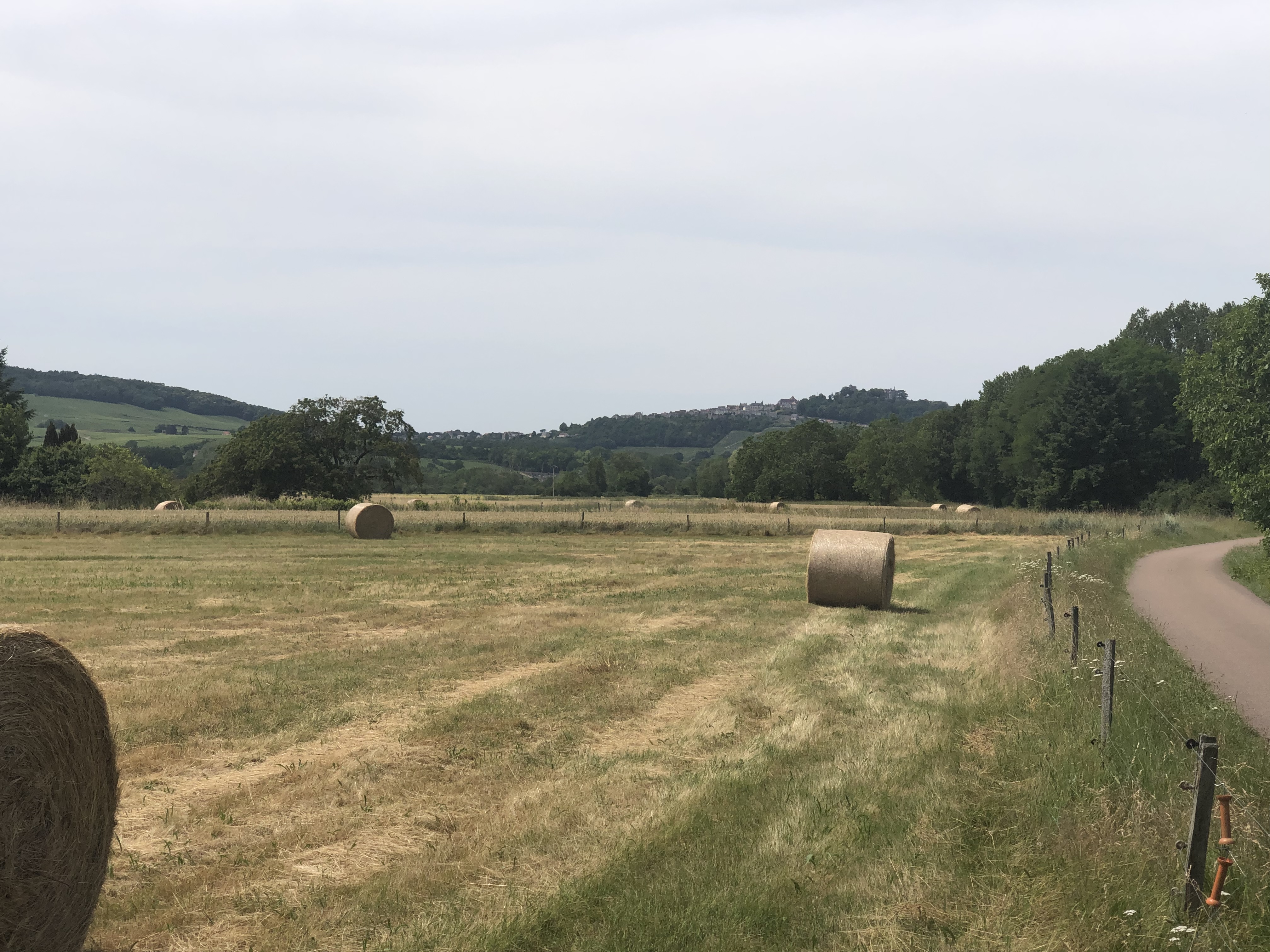 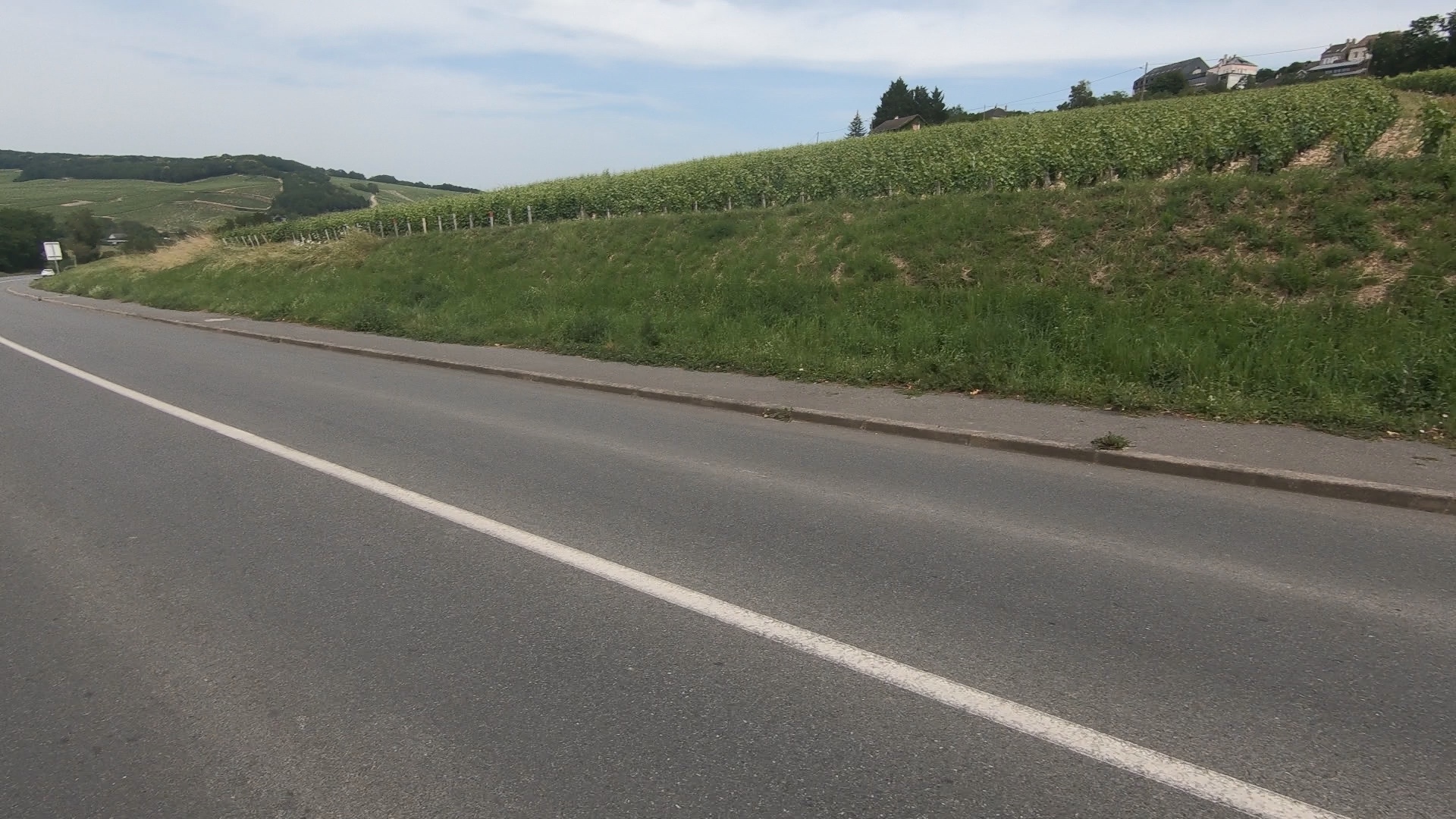 Ahead of us was a lady pedalling hardly at all but making rapid progress up the incline, followed by her husband who was making much heavier work of it. Ah, of course, she was on an electric bike! By the time we got to the hotel we were pink and sweaty, but the friendly chap on reception pretended not to notice and let us in anyway.

So here we are for a rest day, with this fabulous view of the vineyards. 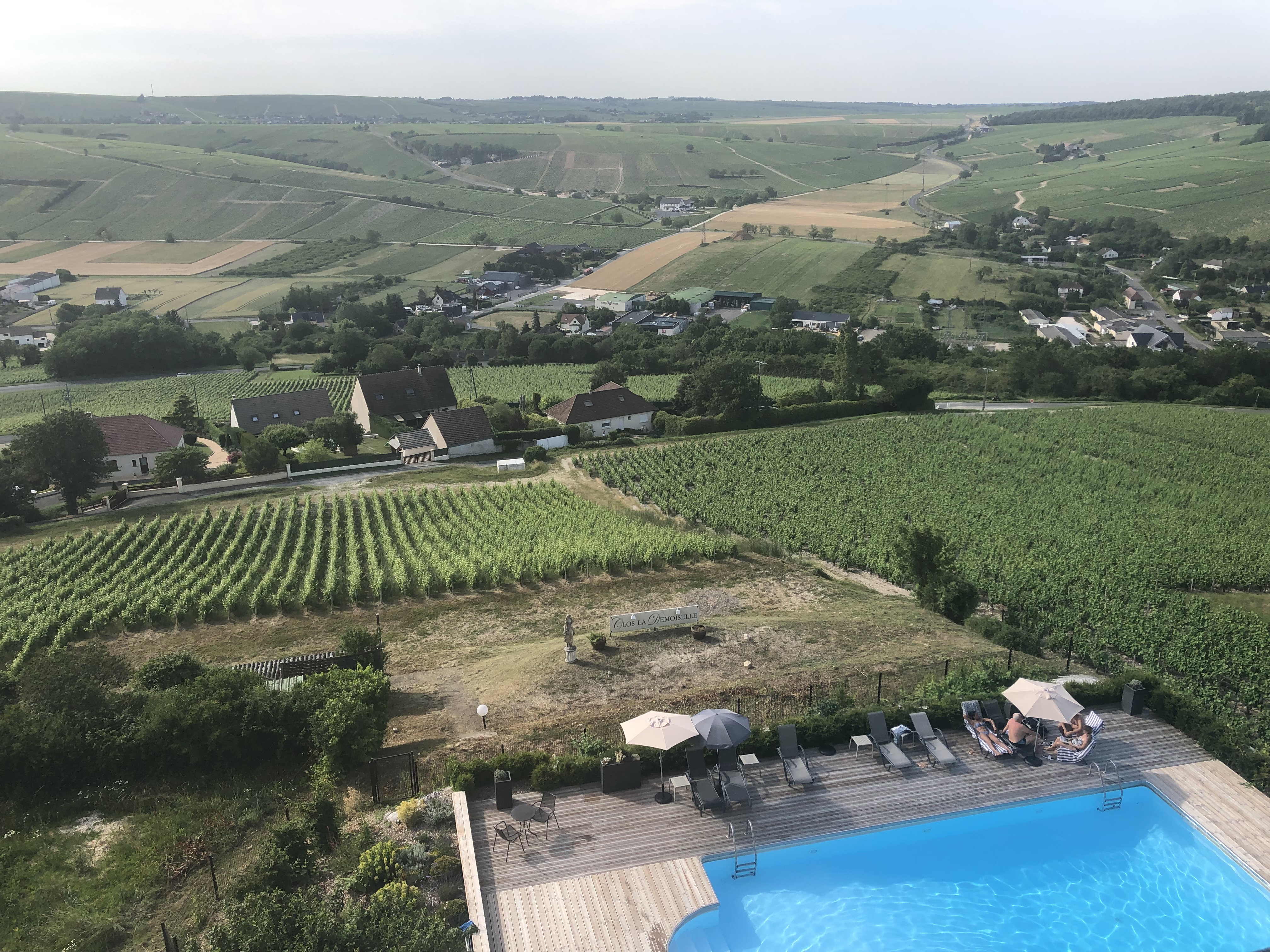 And this is how far we’ve come! 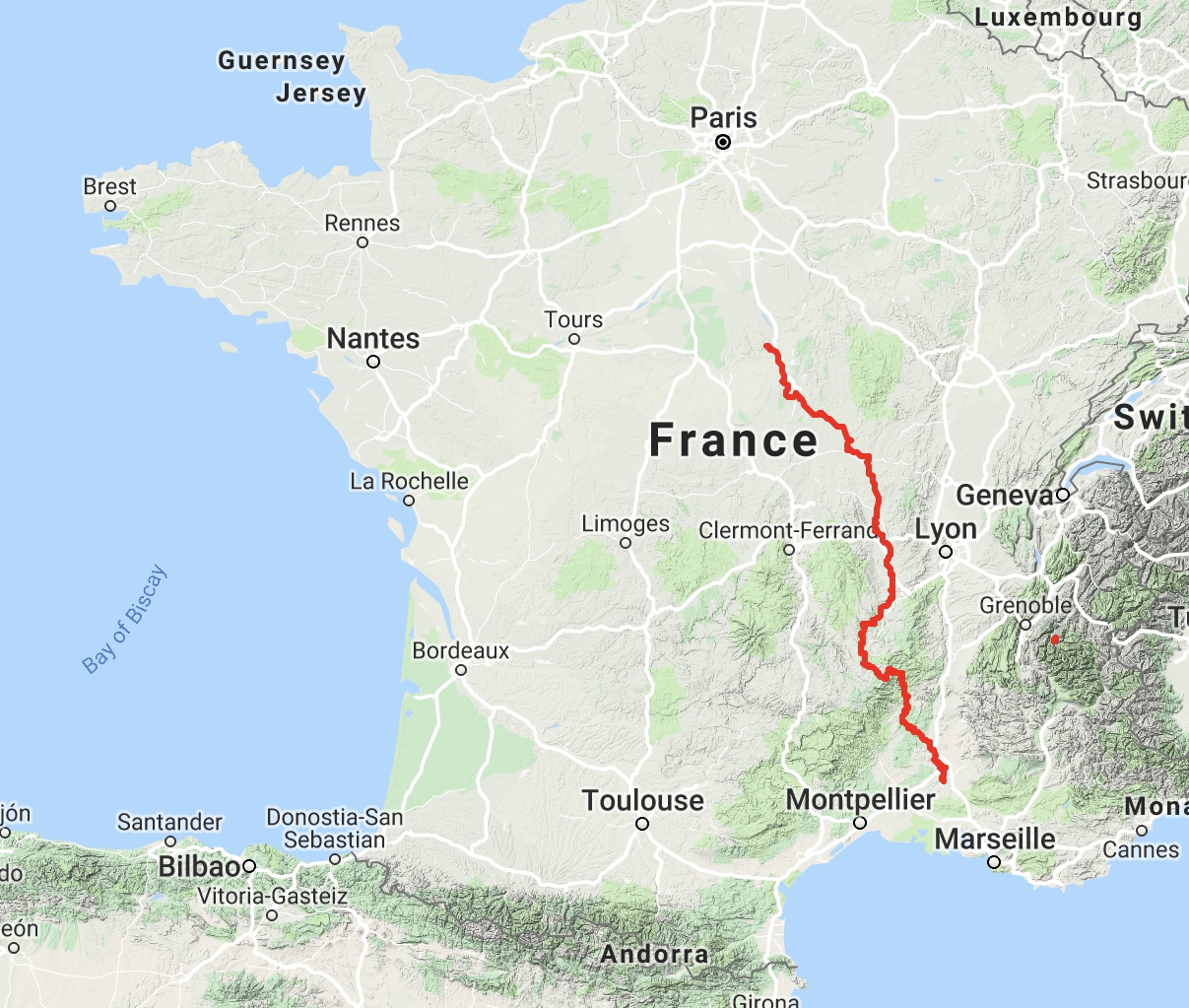