We had a quiet night last night in Feurs, in our enormous town house, which had about four more bedrooms than we required. It was enormously comfortable, and we dined on risotto, washed down with some Burgundy.

The forecast today was for better weather. Well, it started out well enough. We took a quick look at the main square in Feurs before departure. 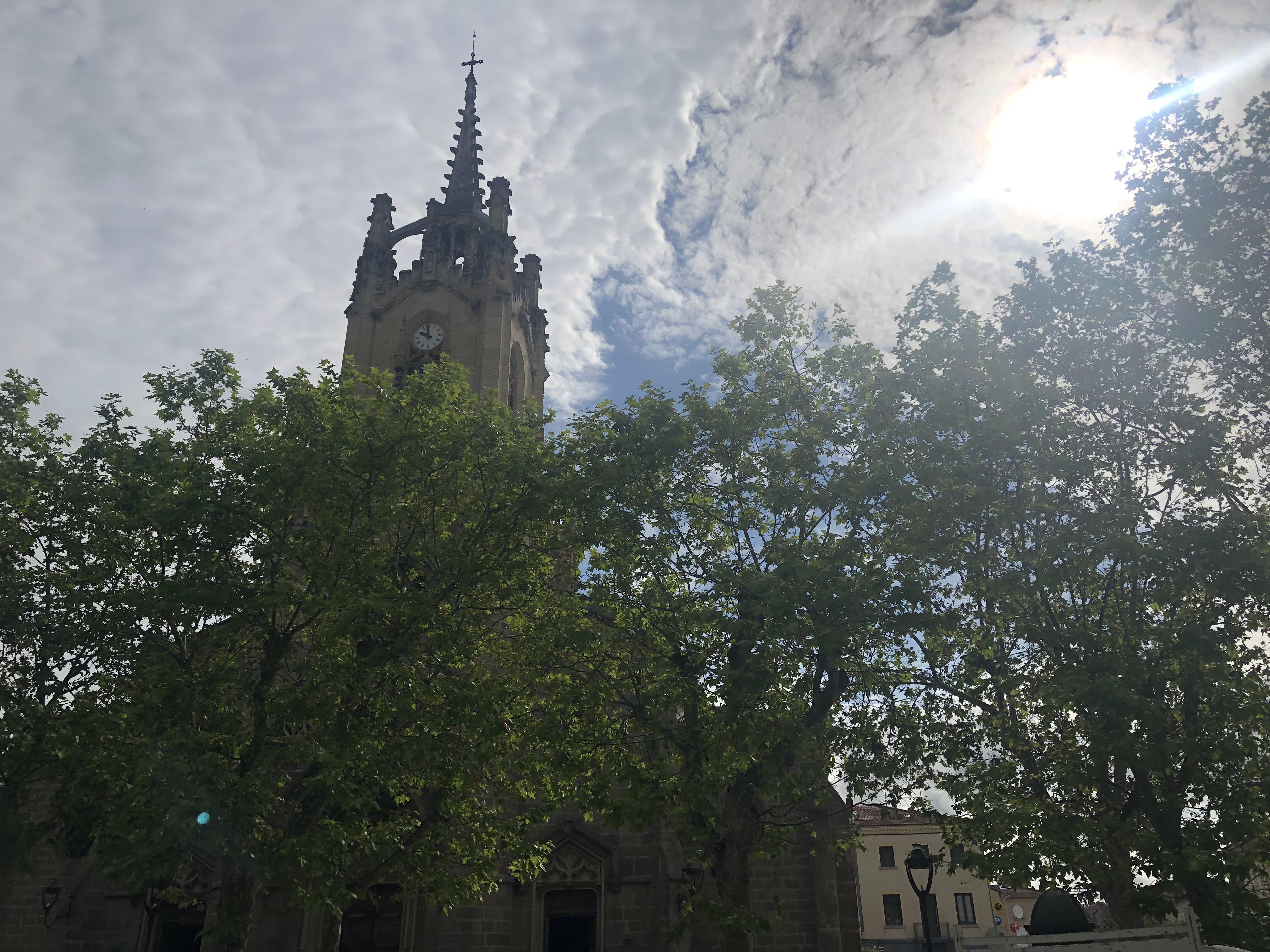 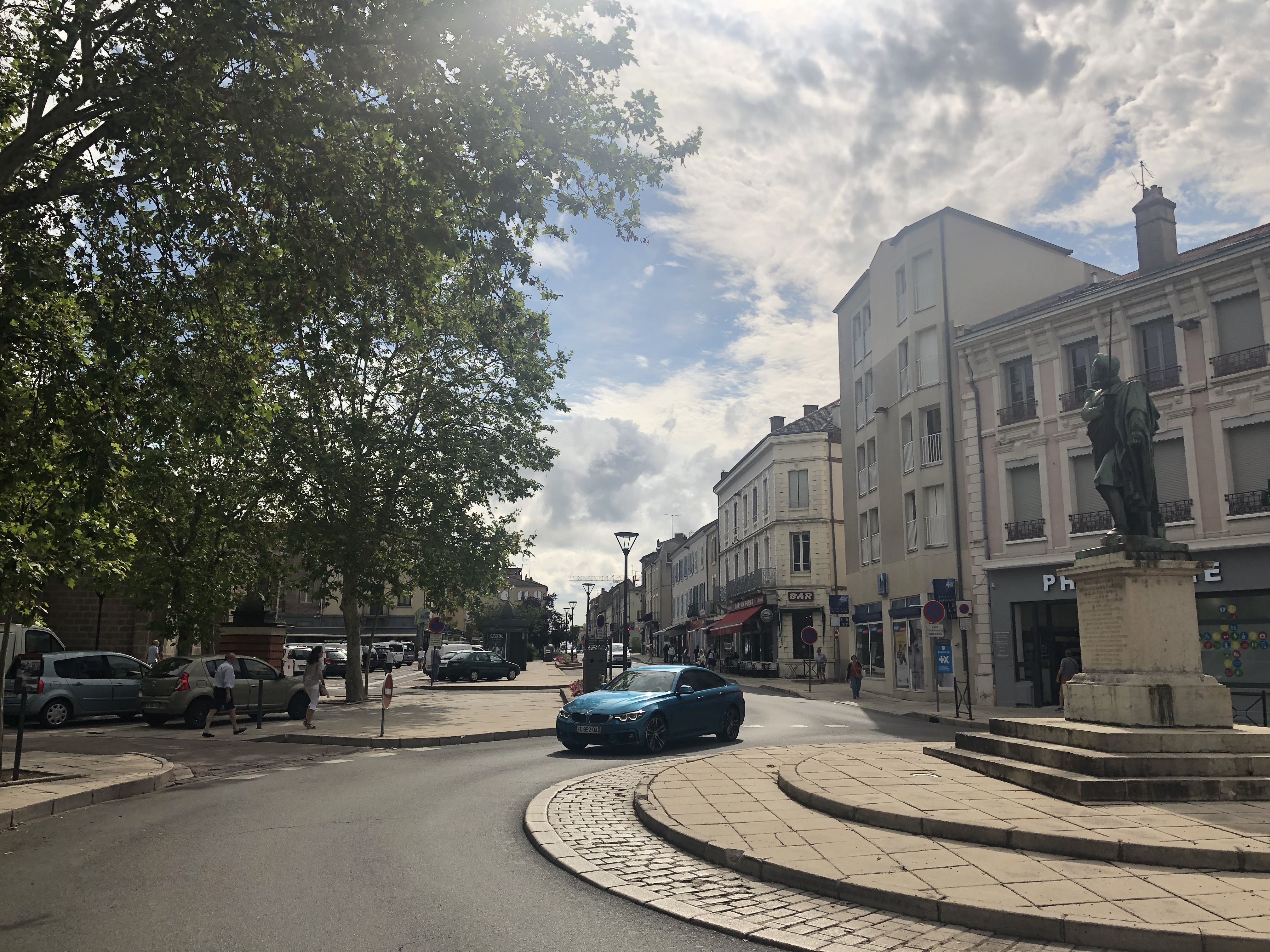 We left Feurs on the busy northbound road, making fast progress despite keeping an eye out for all the traffic. It was all well-behaved, but it was still a relief to turn onto a much quieter road near Balbigny, as the heavy traffic continued on towards the autoroute.

We were approaching the last of the Loire gorges – after today the Loire opens out into a much shallower valley floor. We were soon happily cycling along the rive gauche of the Loire, steep valley walls on either side, more wooded than craggy this time, but with the now-familiar accompaniment of whirling and hovering birds of prey above us. The road was immensely quiet, and the only cloud on the horizon was, well, the clouds on the horizon. It wasn’t a question of whether we were going to get wet, only a matter of when.

The day’s profile showed two main climbs – this was deceiving, as each involved a succession of ups and downs. The first involved a more-or-less steady ascent out of the gorge towards the towns of Pinay and Saint-Jodard. It was soon achieved, and was followed by a swift descent back to the Loire where, after a short ride alongside the river, we encountered the magnificent Château de la Roche, situated on a small island mid-stream. 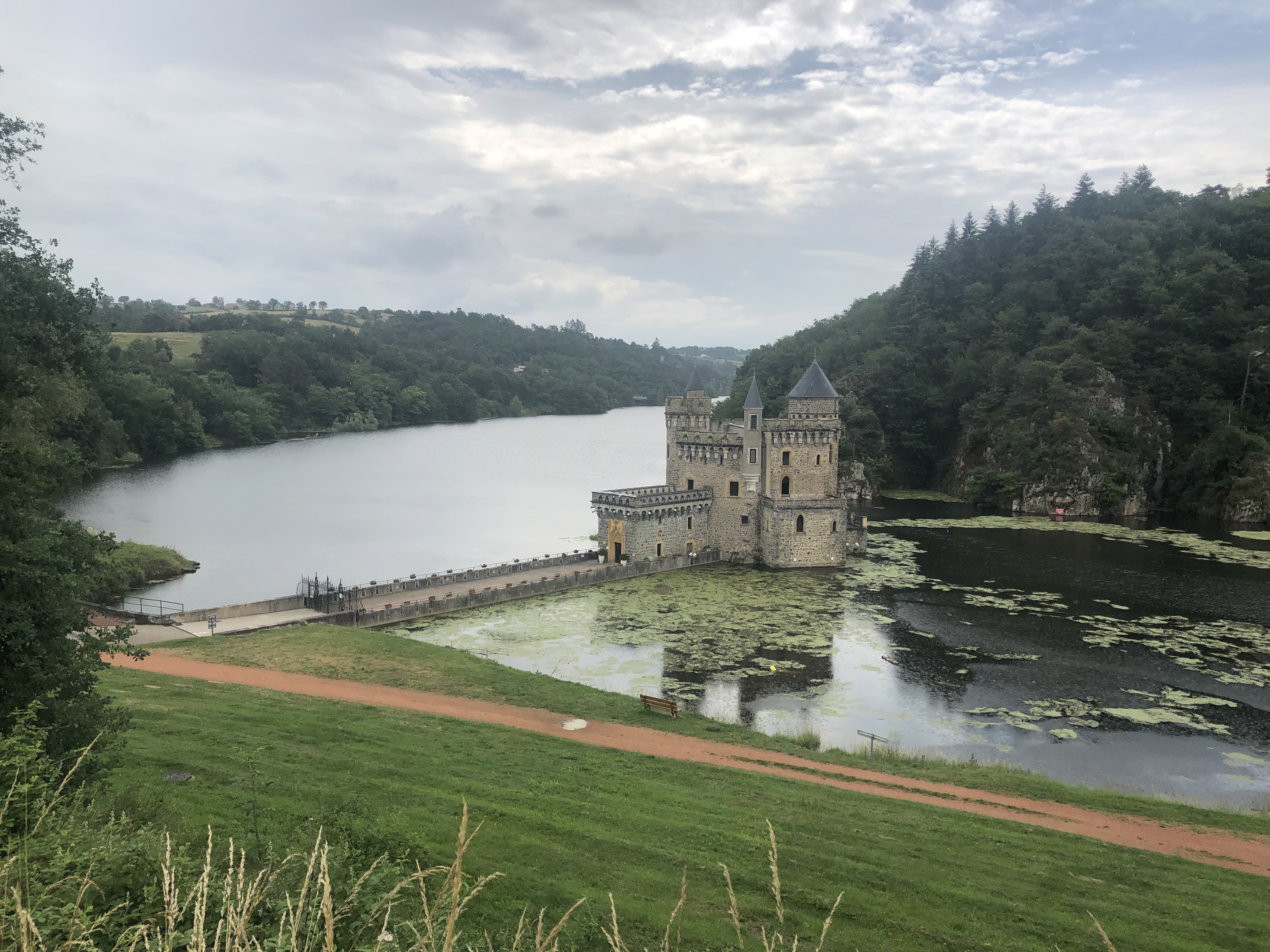 More riverside bimbling ensued, now clad in rainwear, although the rain wasn’t too heavy. With the beginning of the second, considerably harder climb, we put them back in the back bag. Indeed the sun emerged again, for a while, as we ascended, more slowly this time because of the sharper gradient. It was slightly sad to reach the summit of the last gorge climb – this sort of terrain is what we really enjoy, and we won’t encounter it again on this trip.

Shortly after the summit we diverted to a belvedere looking down over the river, having passed a sign advertising the biggest meander in the Loire. At the Belvedere, surrounded by a school party, was a massive sundial. No sun whatsoever, sadly, just the sundial. Still, the views were excellent, over the dammed river, in the final part of the gorge. 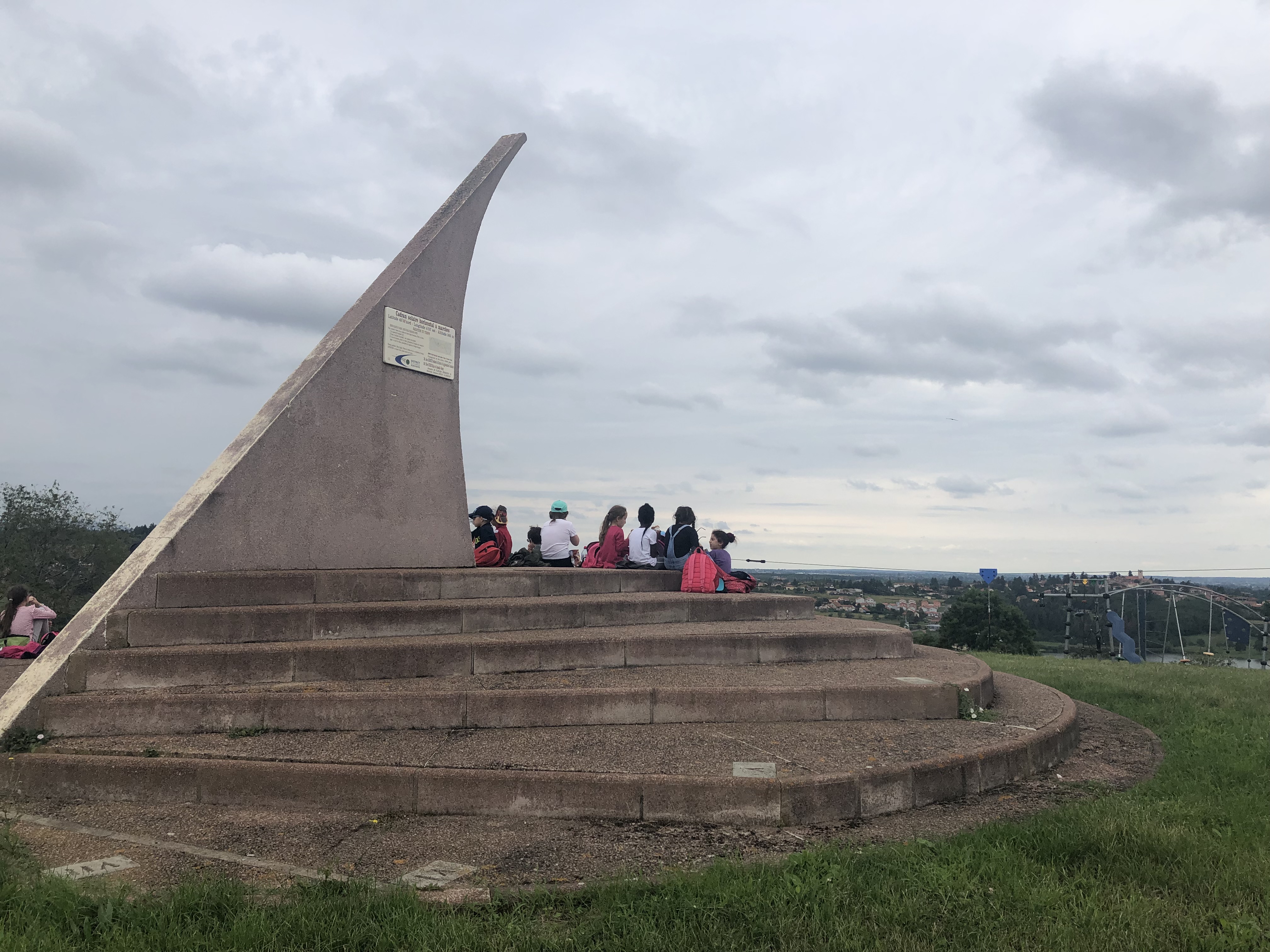 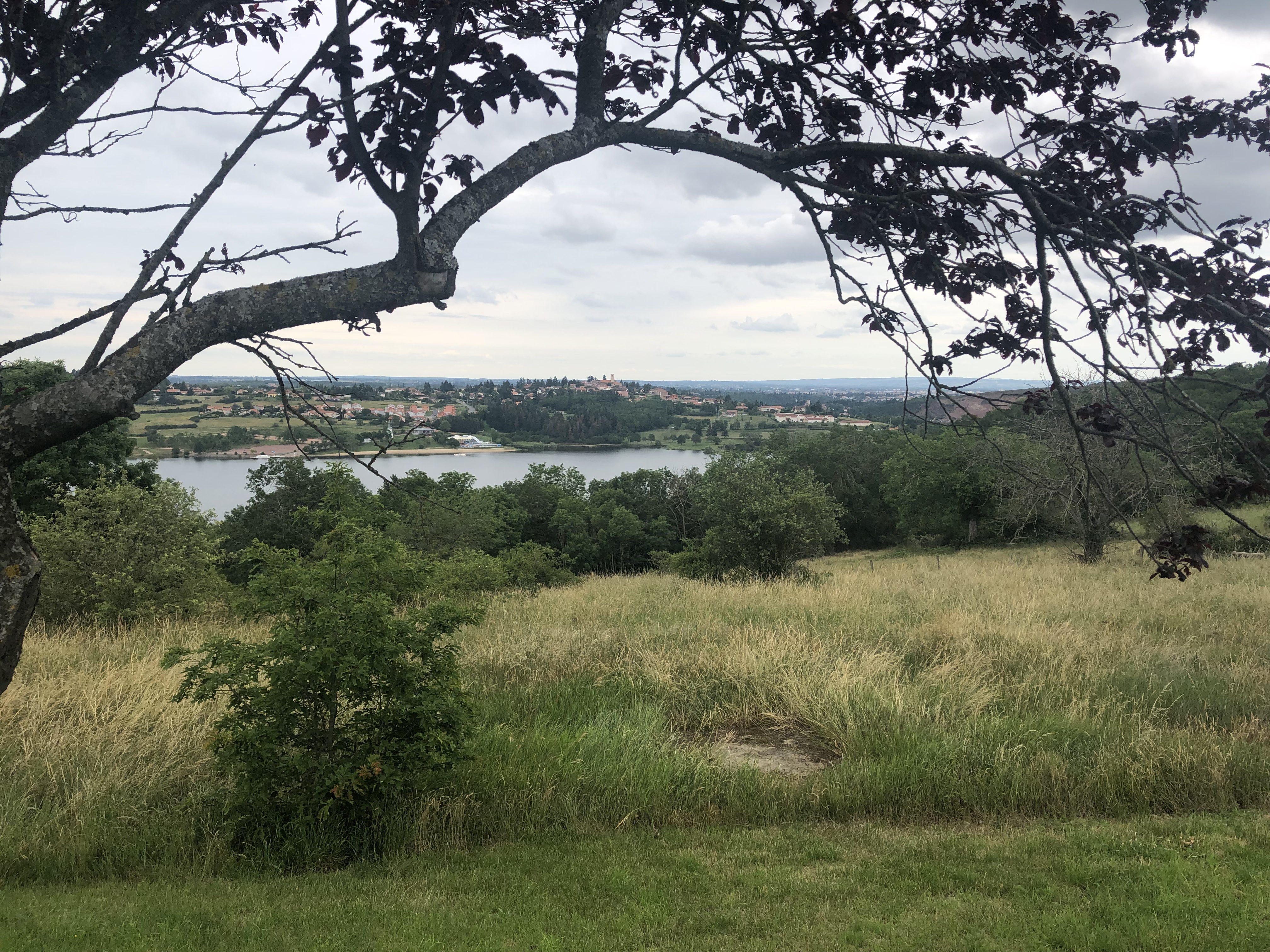 It was approaching lunchtime. We enjoyed the descent down to a large and fairly ugly concrete dam. 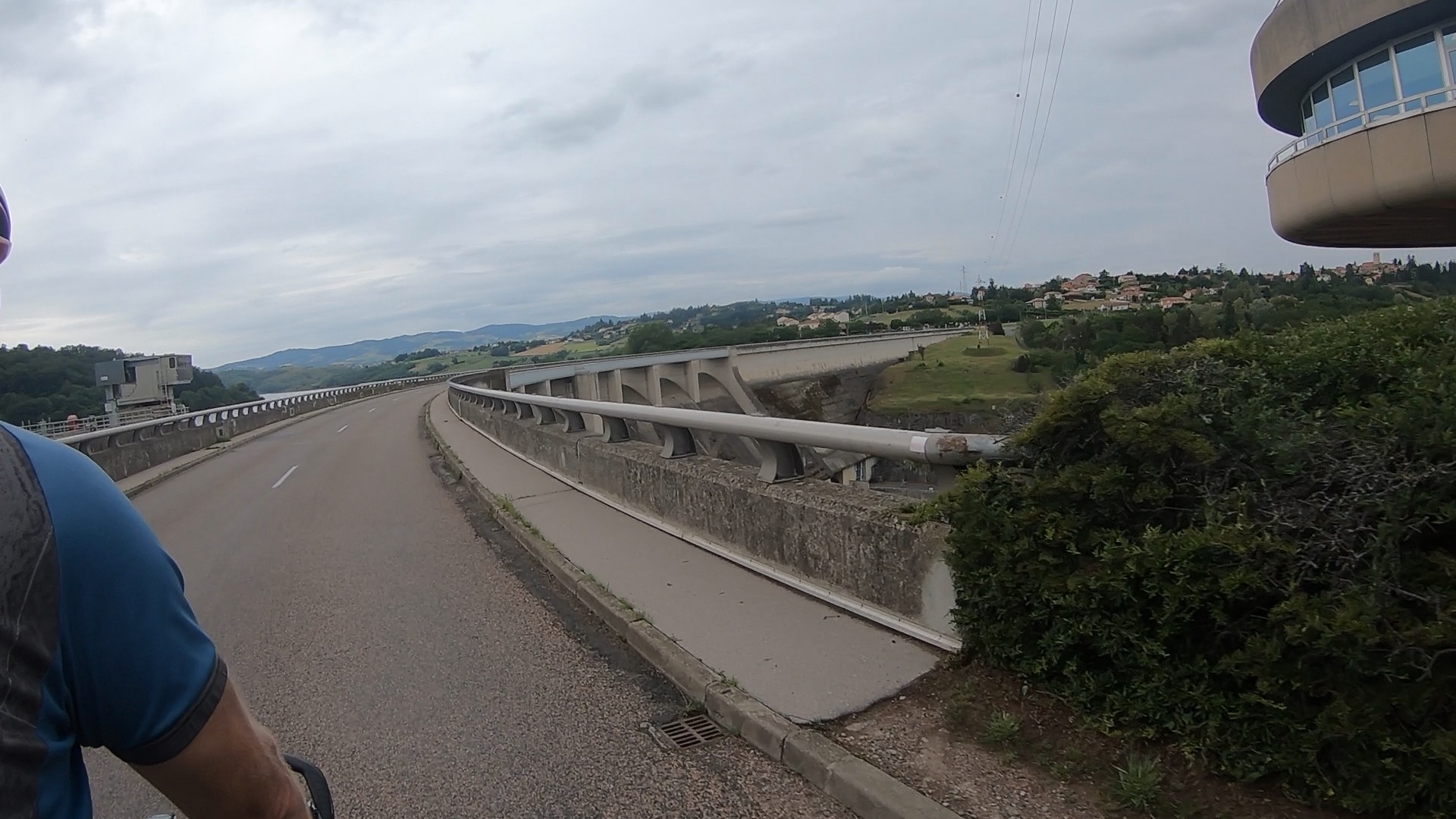 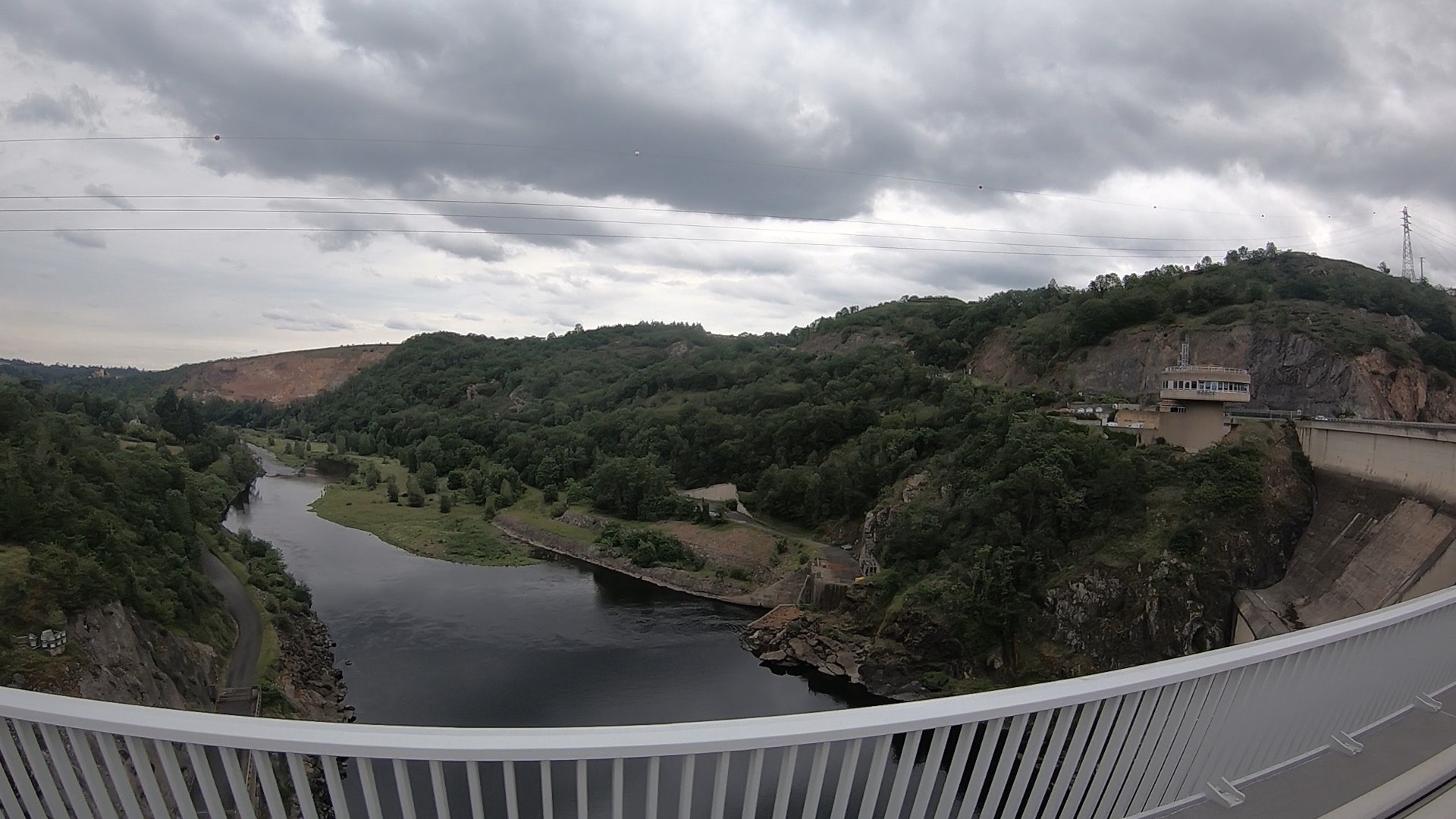 The Loire, while much more narrow after the dam, was immensely picturesque. 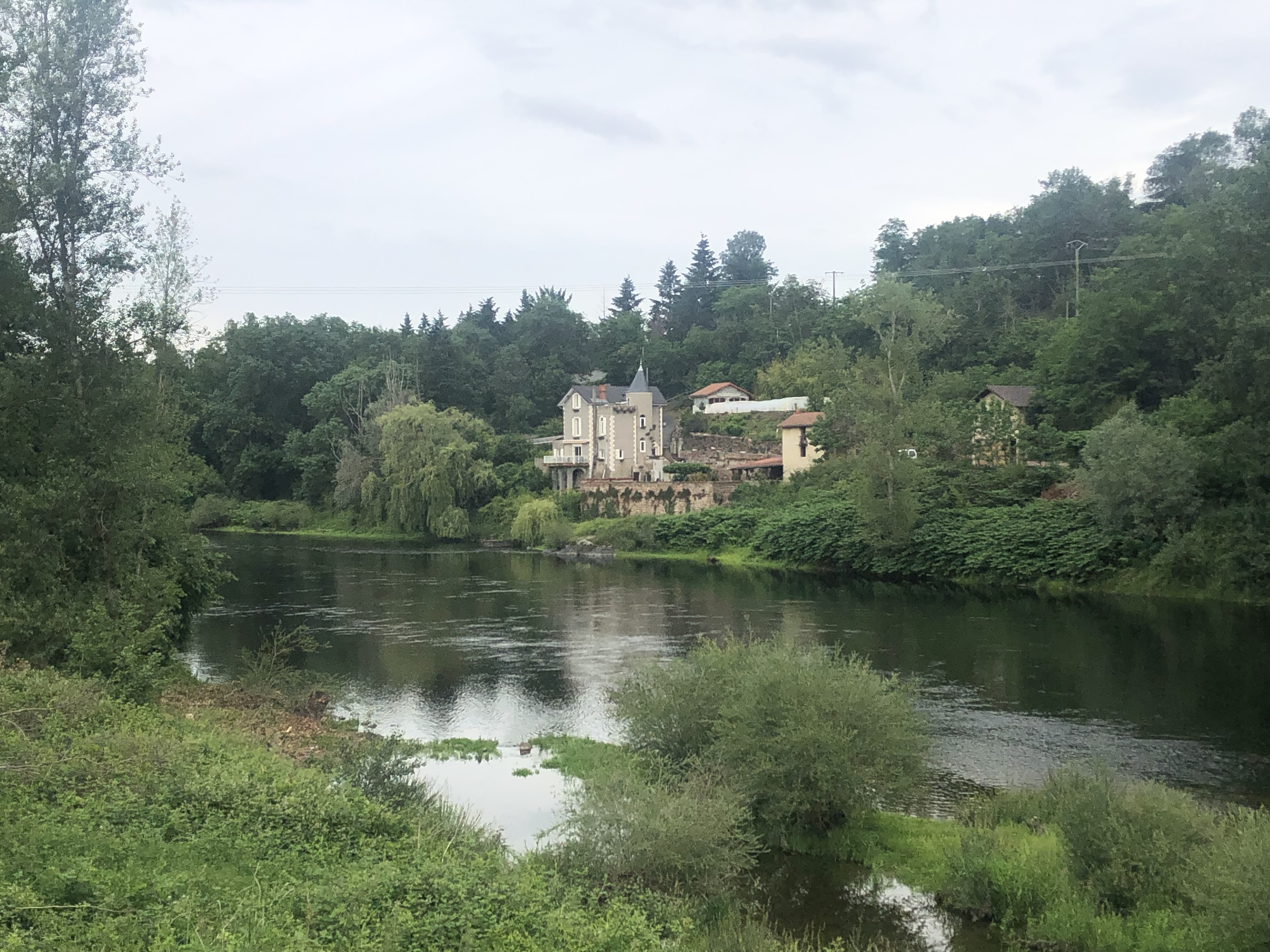 Being quite hungry by now, we were delighted when we spotted a road-side auberge. We were less delighted when the proprietor, who watched us checking the menu, waited until we were ready to ask for a table before deciding his establishment was closed. Not very friendly…

We rode on into the town of Roanne, a Police song missing a single letter ‘x’. It was a strange mixture of charming older buildings and ugly modern ones, and seemed rather down-at-heel. 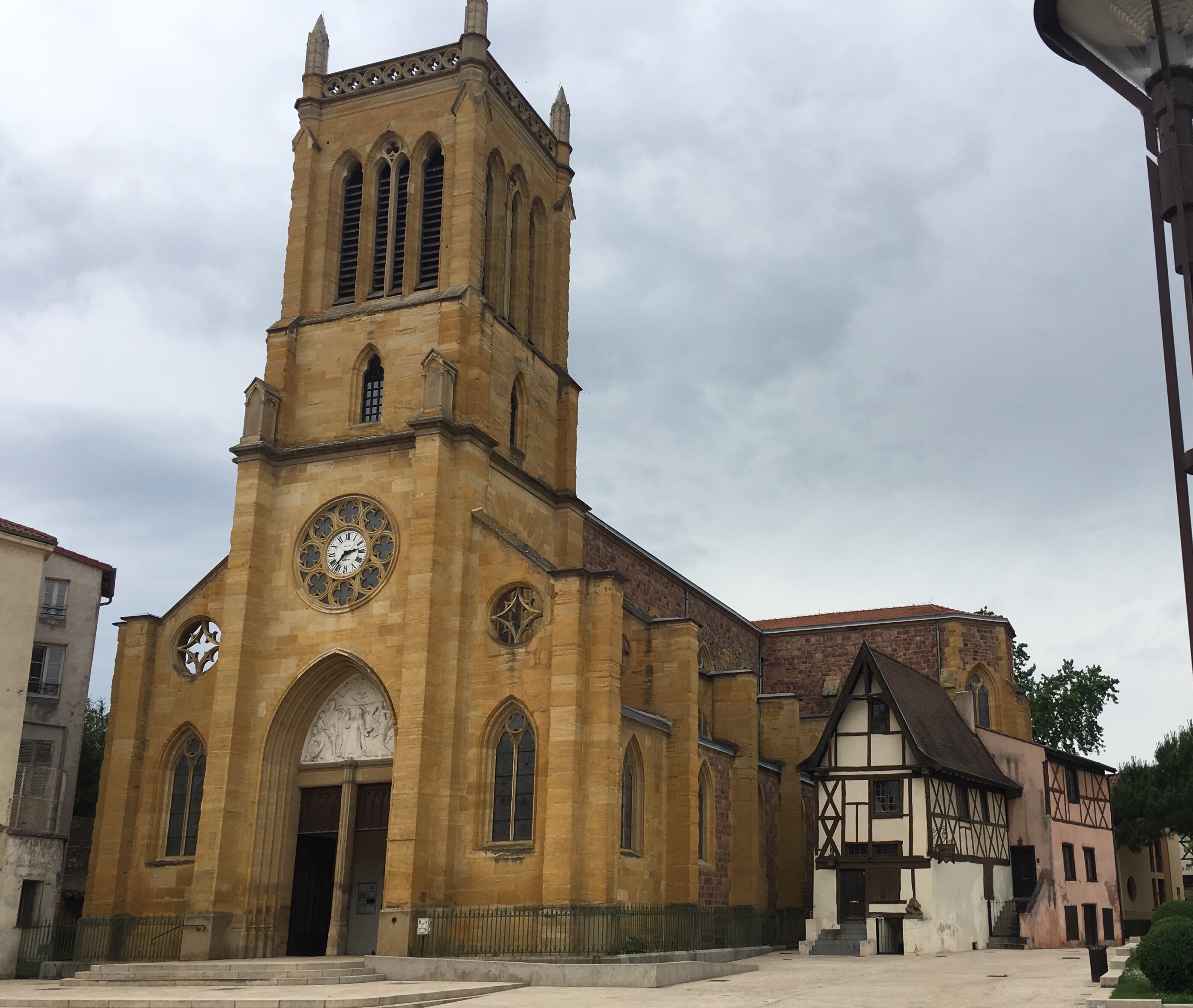 Our second attempt at lunch was thwarted at another restaurant which didn’t seem to want to serve us. We were there for twenty-five minutes, and had made our presence known. Tired of waiting, we got back on the bike and pedalled on to a much friendlier boulangerie, where we finally achieved lunch.

The exit from Roanne was on a long, straight, traffic-heavy road until Briennon, when we moved onto a lovely quiet road. We were once again fully clad in rain-jackets now, the rain steady rather than heavy. 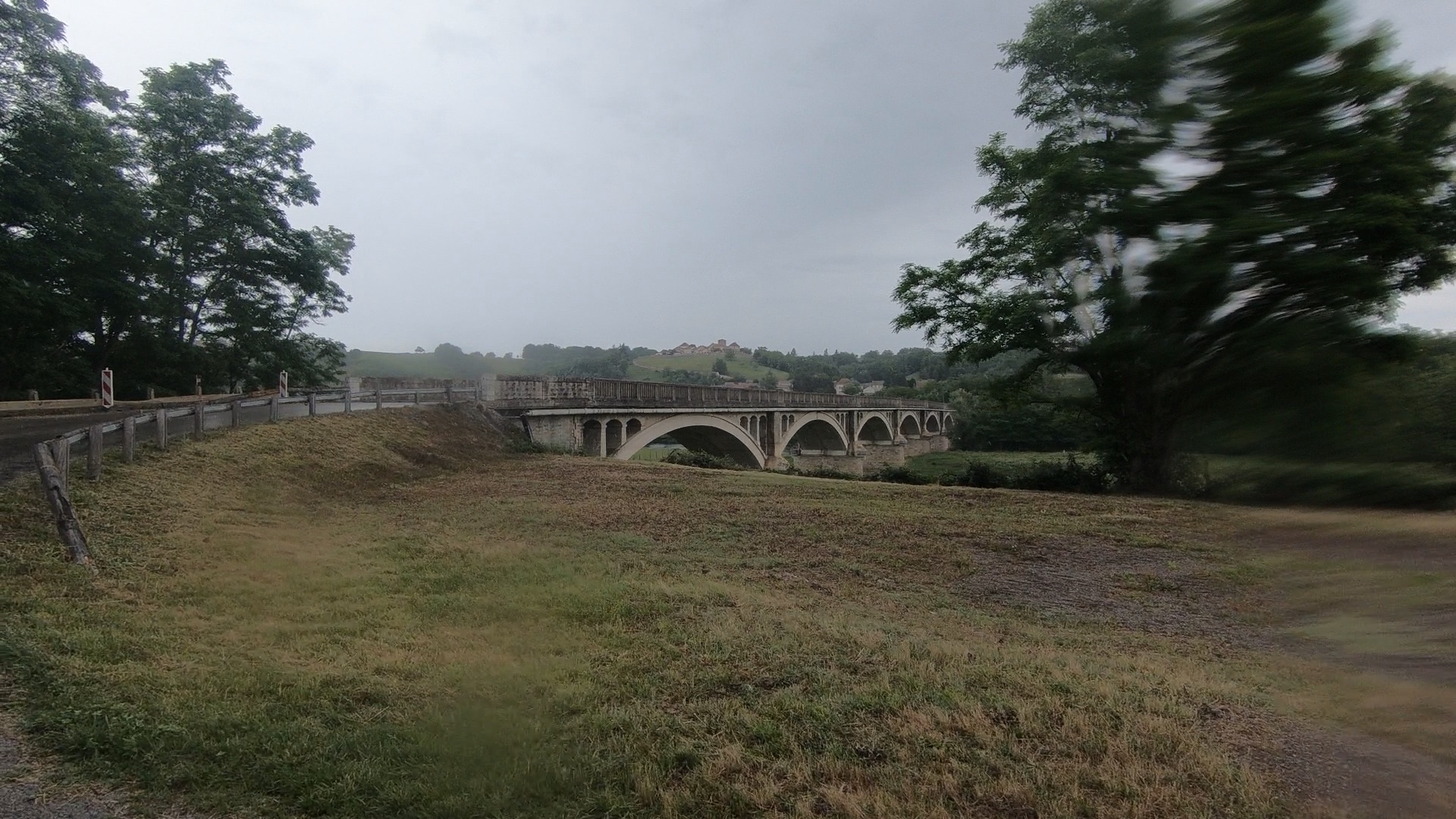 At Iguerande we crossed over the river and turned on to a delightful voie verte, well-surfaced and maintained, which took us along the river and into Marcigny. 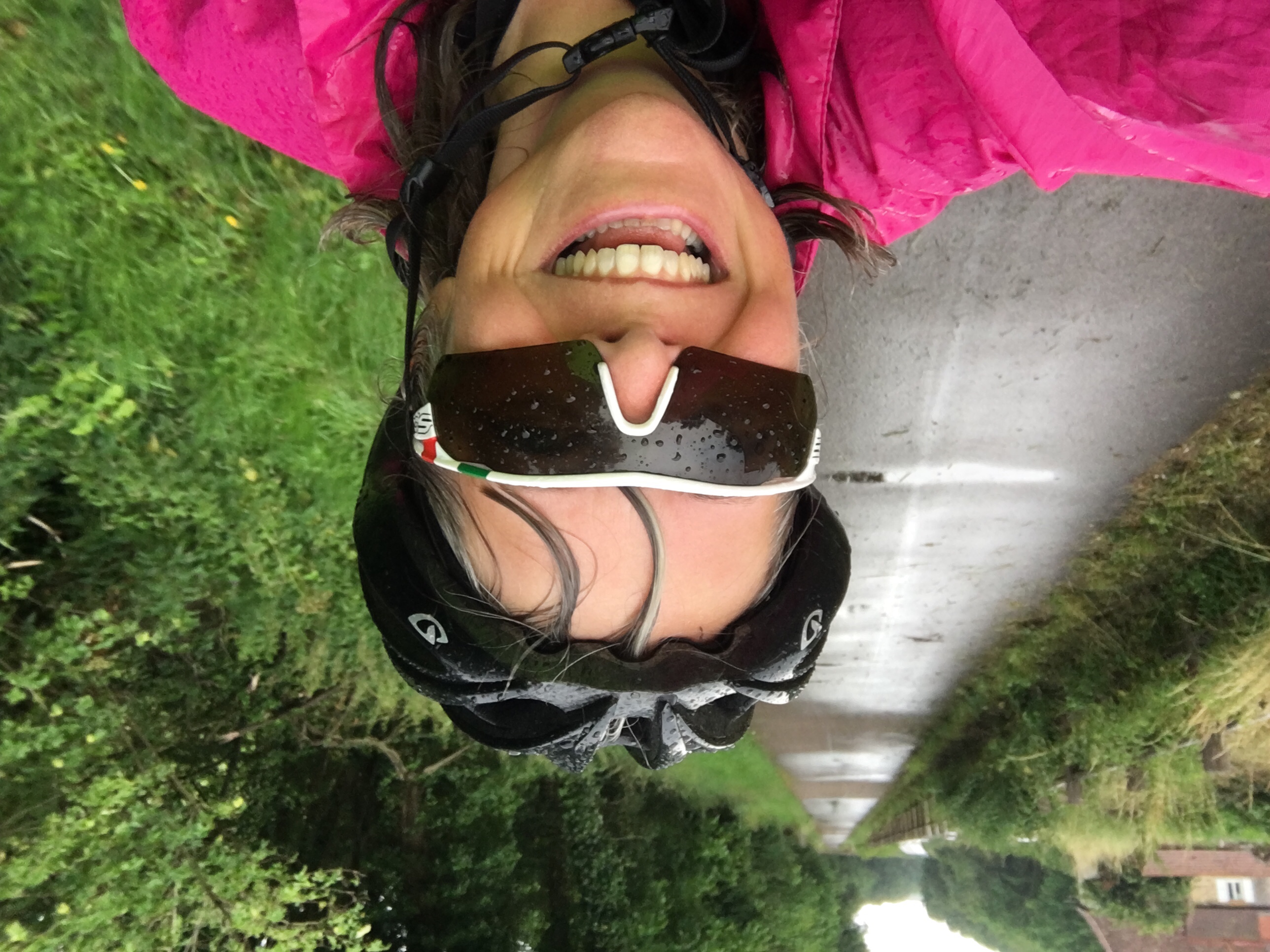 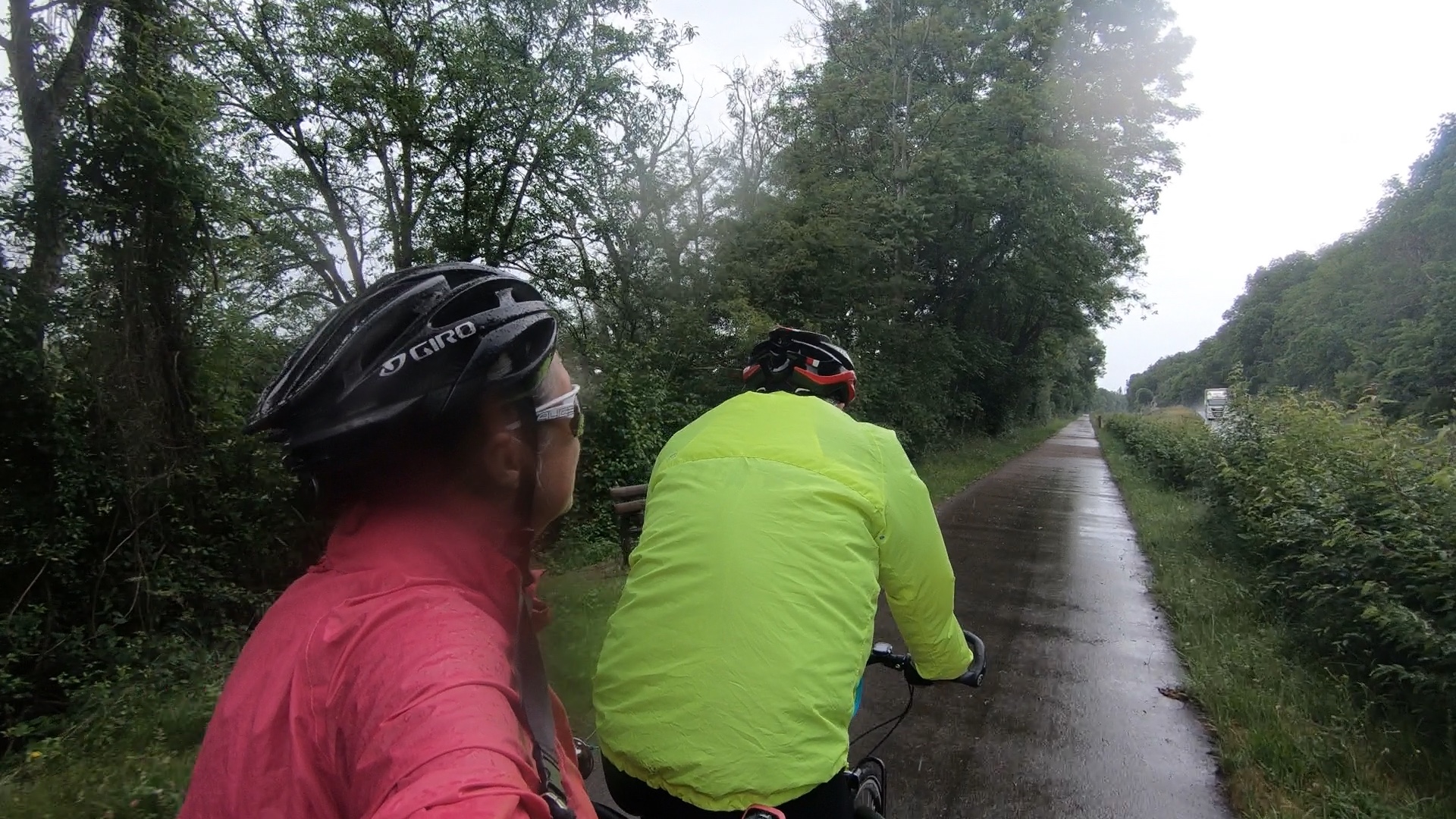 Tomorrow our destination is Bourbon-Lancy, this choice dictated by the lack of accommodation options between here and Nevers. It does look good, though!