We arrived at our accommodation last night at the same time as our host, who let us in and showed us around. It was sunny, and the pool looked very tempting! We had a quick shower and then donned our swimming kit and went in. It was a bit squealy, but not too bad! After we’d lain around for a while in the sun drying off, we realised that dark clouds were looming a bit, and sure enough a few minutes later the heavens opened. Fortunately by the time we were ready to head out for dinner it had stopped, and we walked into town for a pizza.

The family of the house where we were staying were all leaving early this morning, so we had the place to ourselves to eat the breakfast they’d laid out for us. The very small amount of stuff we are carrying had somehow seemed to explode all over our ‘living room’, so it took a while after breakfast to get everything squared away and ready for the off.

There’d been a note on the breakfast table, with a goodbye and other pleasantries, but also with a request to make sure the window in our room was shut before we left “because of the storm”. Storm? Gulp.

We left Bas-en-Basset downhill, a lovely long glide in the sunshine. Storm, what storm?! There was a small climb as we rejoined the Route des Gorges de la Loire proper, and lots of lovely gorge-ous scenery (see what I did there?).

Just before Aurec we needed to cross the Loire, and we saw ahead that there were two bridges, one for cyclists and pedestrians, and the other for powered traffic. “Great!”, we said, “we won’t have to go over with the cars”.

Reader, it was terrifying. The bridge for cyclists was narrow and constructed with a metal grill as the riding surface, with more grill on either side to stop you falling off. It was perfectly safe, really it was, but you could see through the surface down to the river way below, and right through the sides! 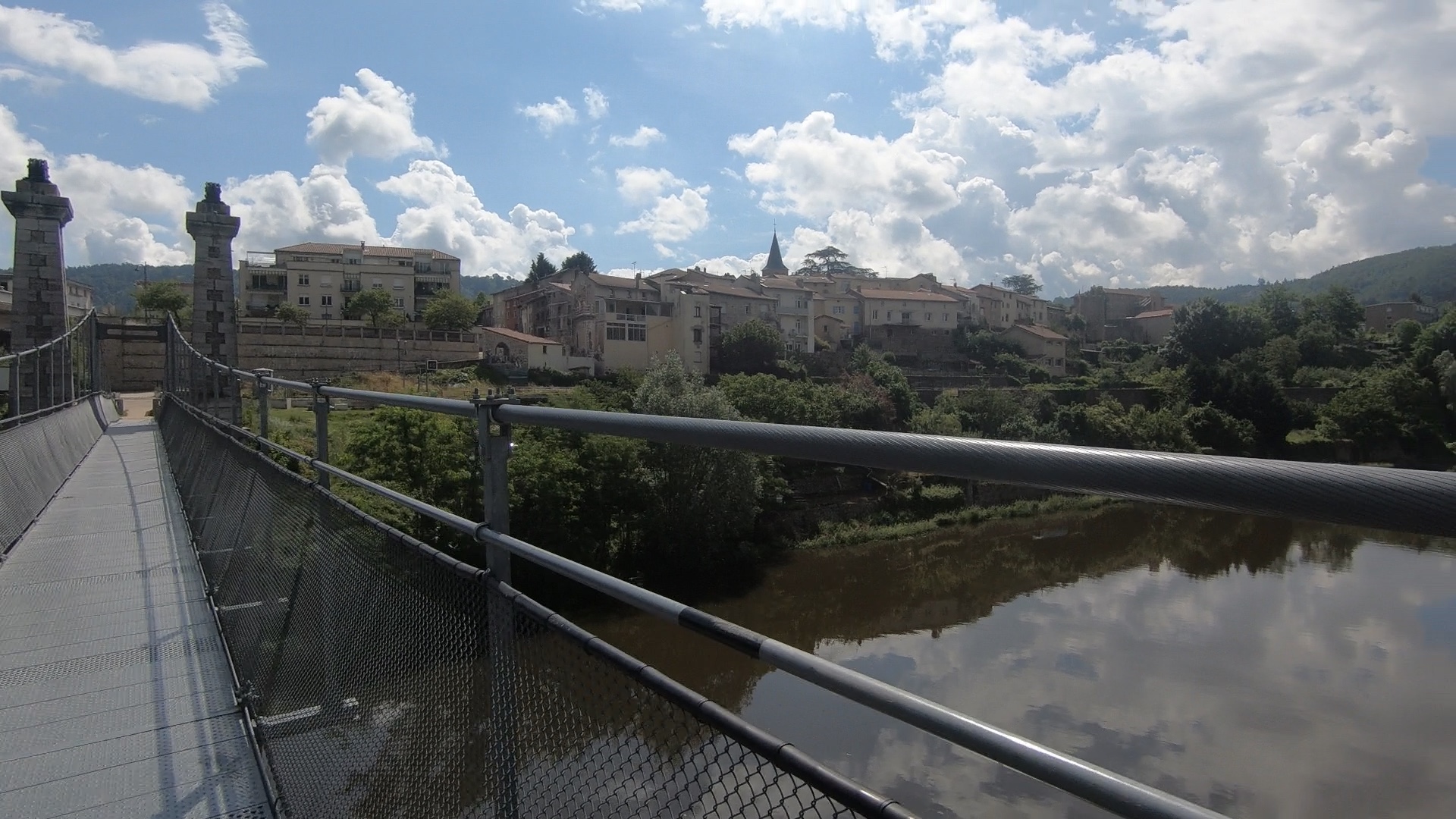 And this is what it was like riding over it:

That’s me clinging on for dear life to the GoPro and the handlebars at the same time! If you could have seen the Captain’s shoulders, you’d have realised how much he was tensing up as we rode over!

In truth it was over quite quickly, and we laughed rather nervously on the other side at what we’d just been through. On through Aurec, then, where the roundabouts were all decorated with spray-painted bicycles, huge flowers made of bicycle wheels and various other arty bicycle-related things. 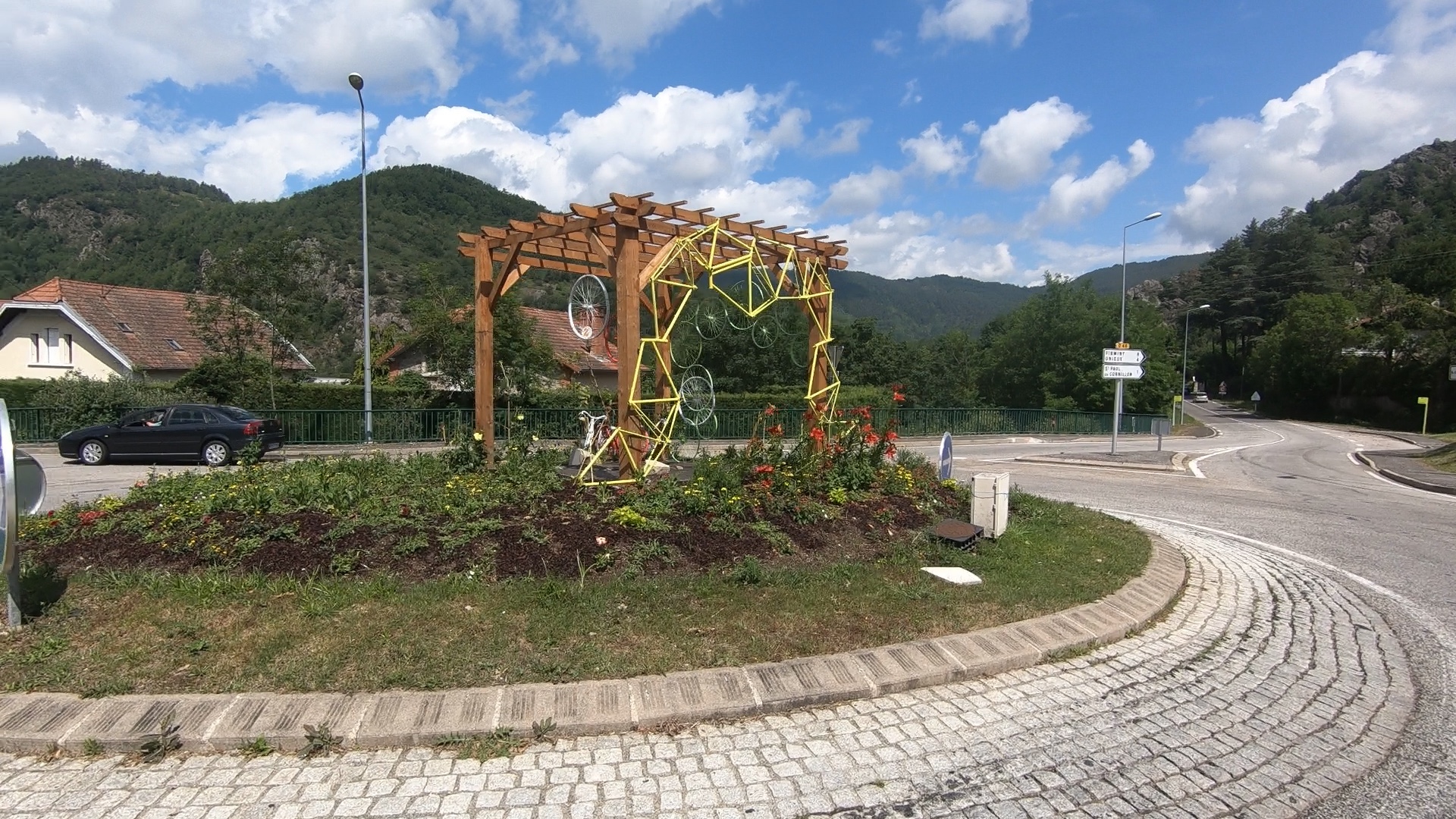 We speculated that the Dauphiné professional bike race had been through recently, the one where Chris Froome had a crash and broke, well, lots of bones. He was taken to hospital in Saint Etienne, which is very close to here, so it seemed plausible.

At Saint-Paul-en-Cornillon the Loire is lightly dammed again, and there were some beautiful views, including this lovely bridge. 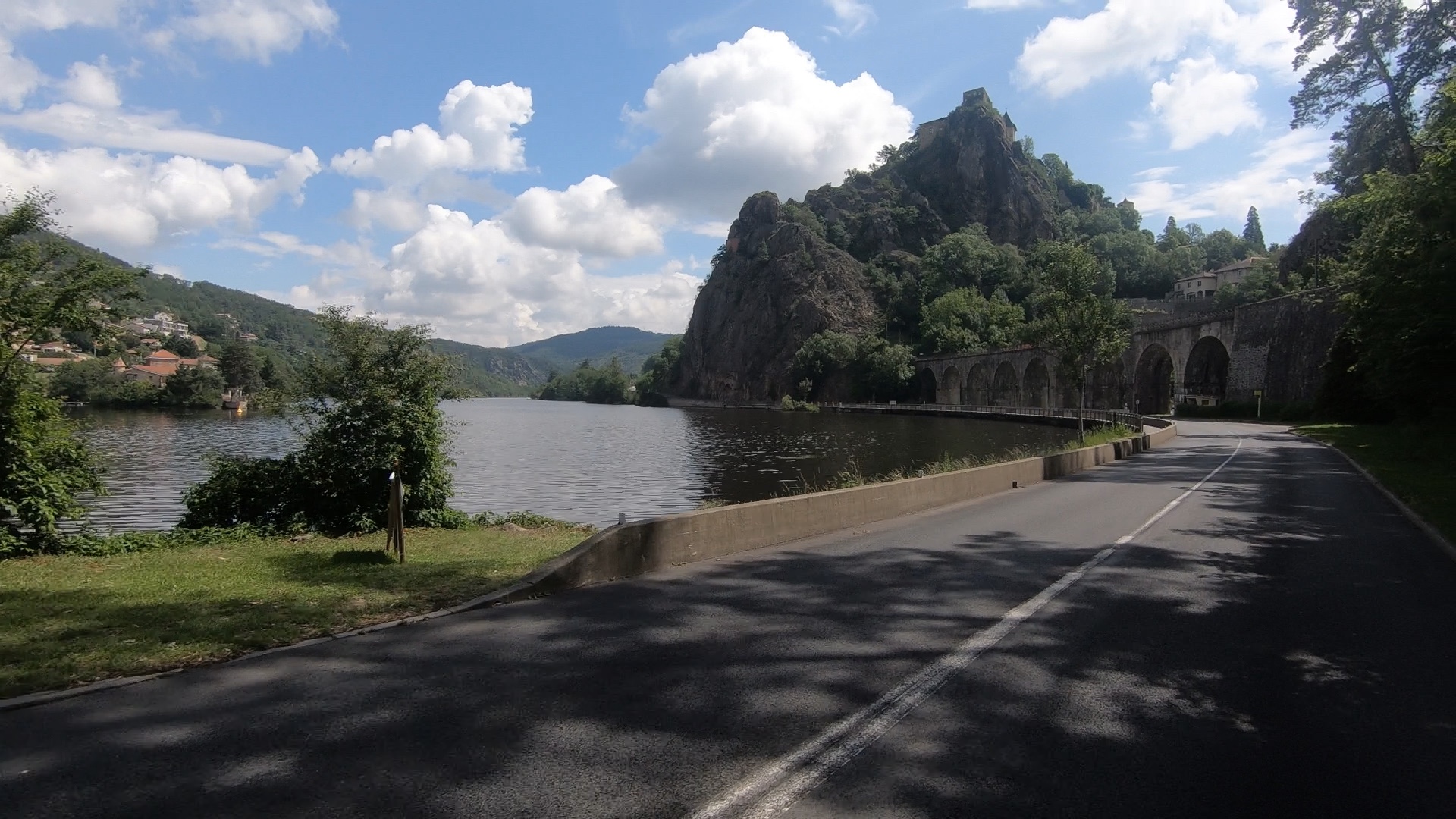 We could see another bridge, a huge metal construction, looming ahead, and knew we needed to cross it to start our climb to Chambles, but when we got to the turn it was all blocked off by construction traffic, with no apparent way across in the direction we wanted to go. This can be a serious problem on a long day’s cycling, especially when the river you want to cross is so wide that there are few bridges available.

After a bit of looking around and watching the traffic we realised that in fact there was a contra-flow in operation, so we just needed to slot ourselves in to the flow at the right time and we’d be able to get across. Phew. 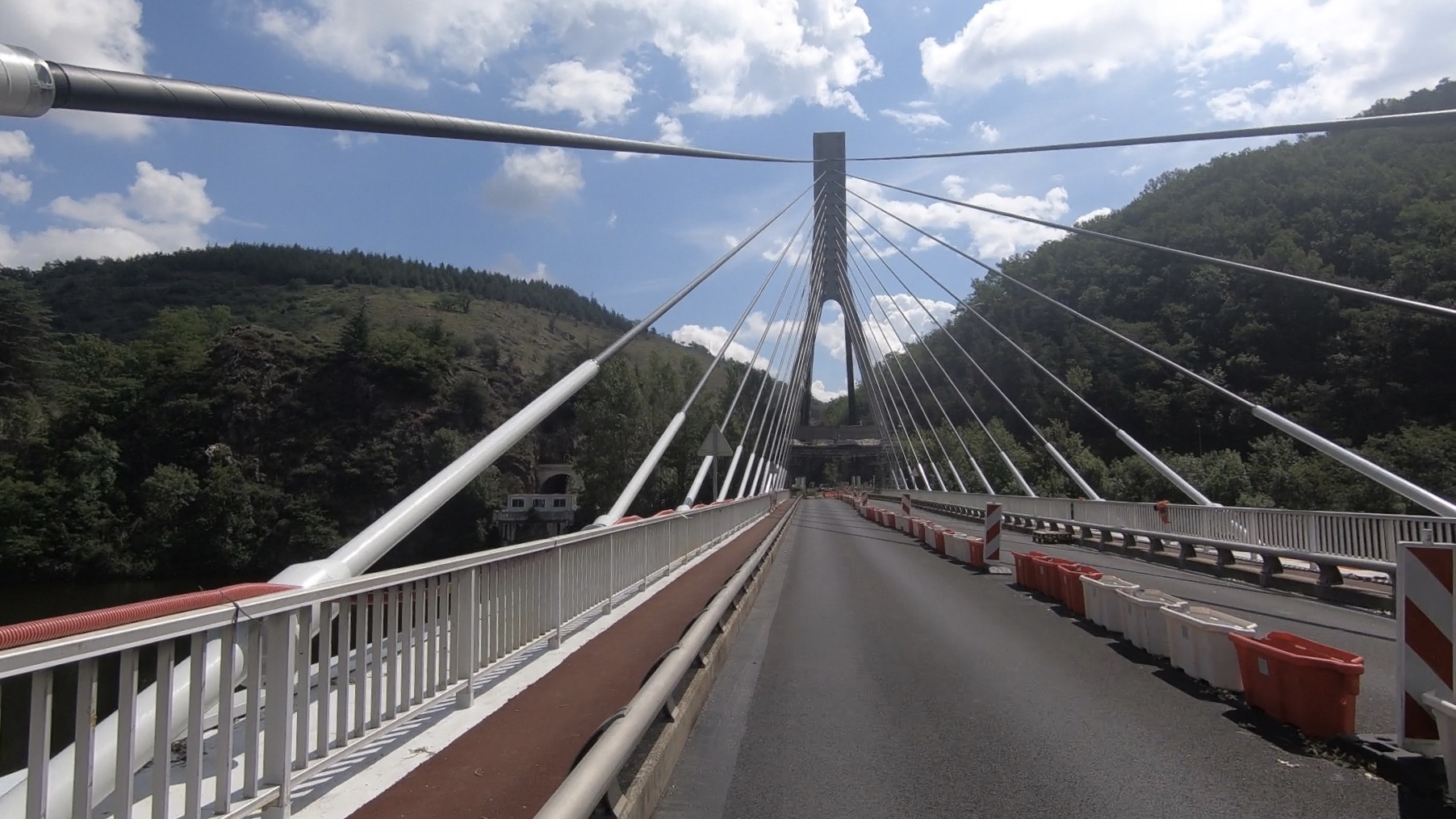 The climb up to Chambles was to be the last significant climb of this whole trip, we were told by the guide book we’ve been using to plot our routes. It started gently, and took us up and around a big loop in the river, in and out of forested sections in dappled light. It’s a signal that we’re definitely getting fitter that we didn’t stop at all during 8km of climbing, arriving in Chambles to find a sweet little village, with a tower and presbytery, the views from which were spectacular in both directions. 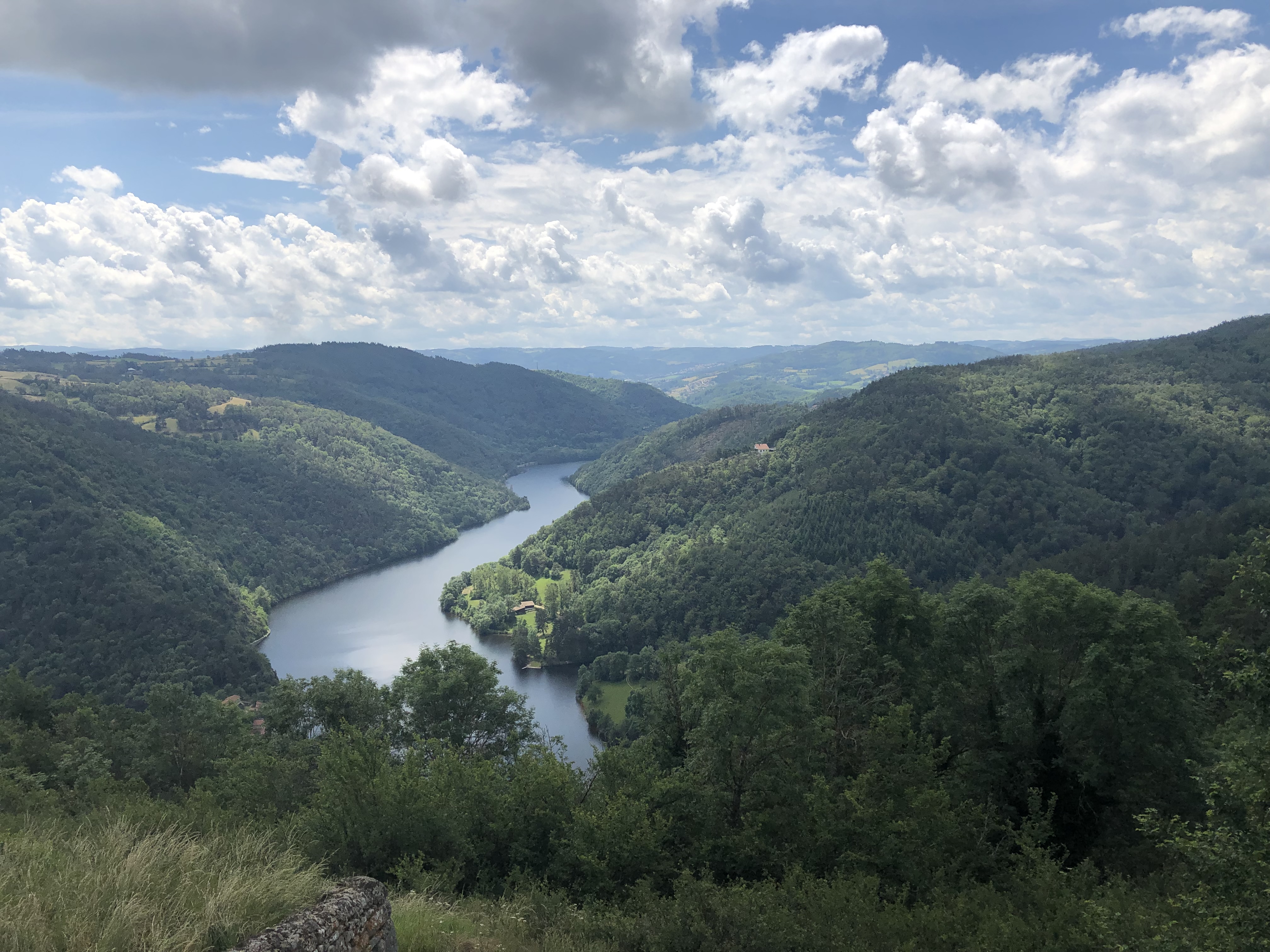 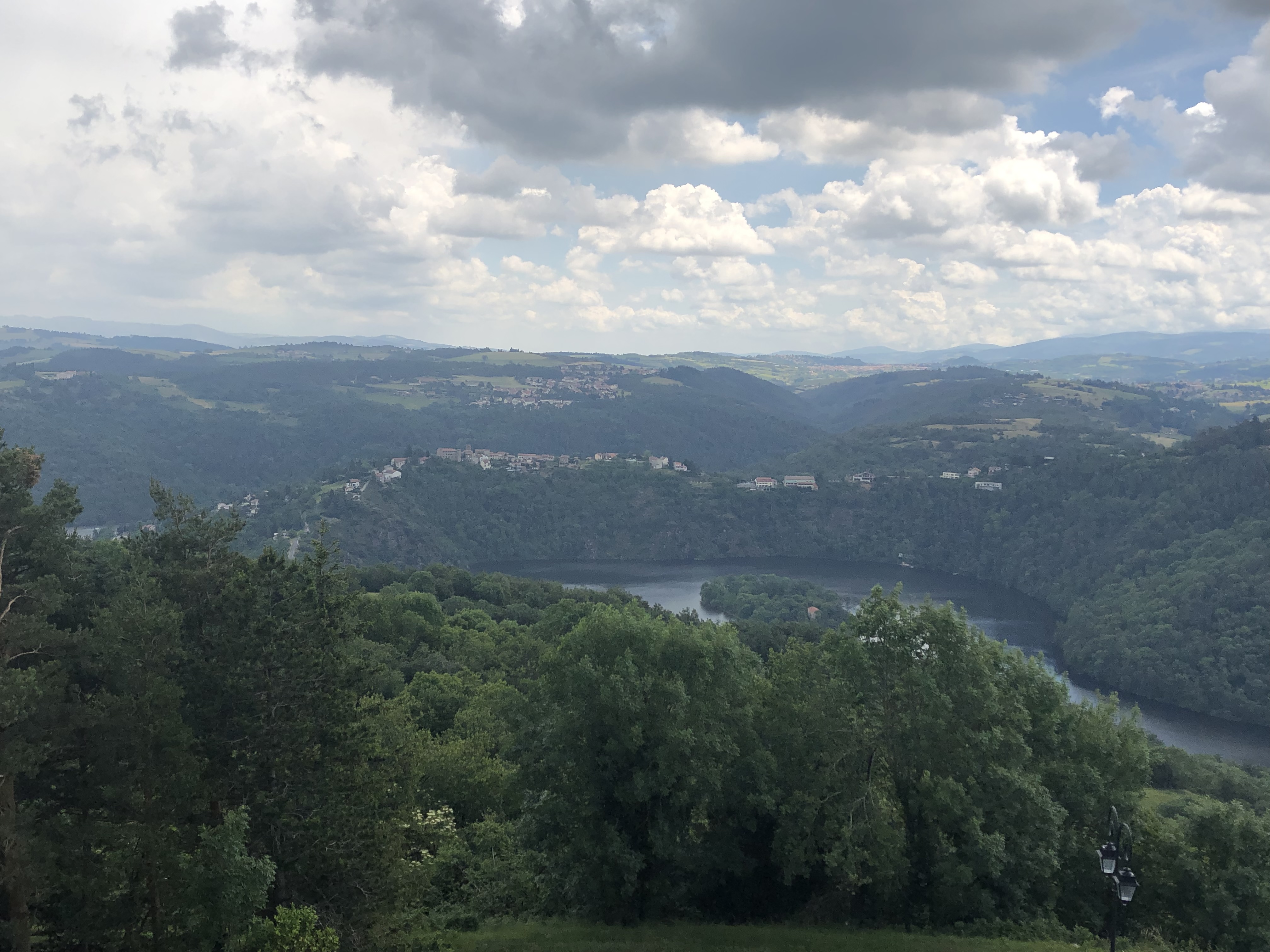 We thought to climb the tower for even better views, but the stairs inside looked very rickety and there were warning signs about the difficulty of the access, so we gave it a miss. 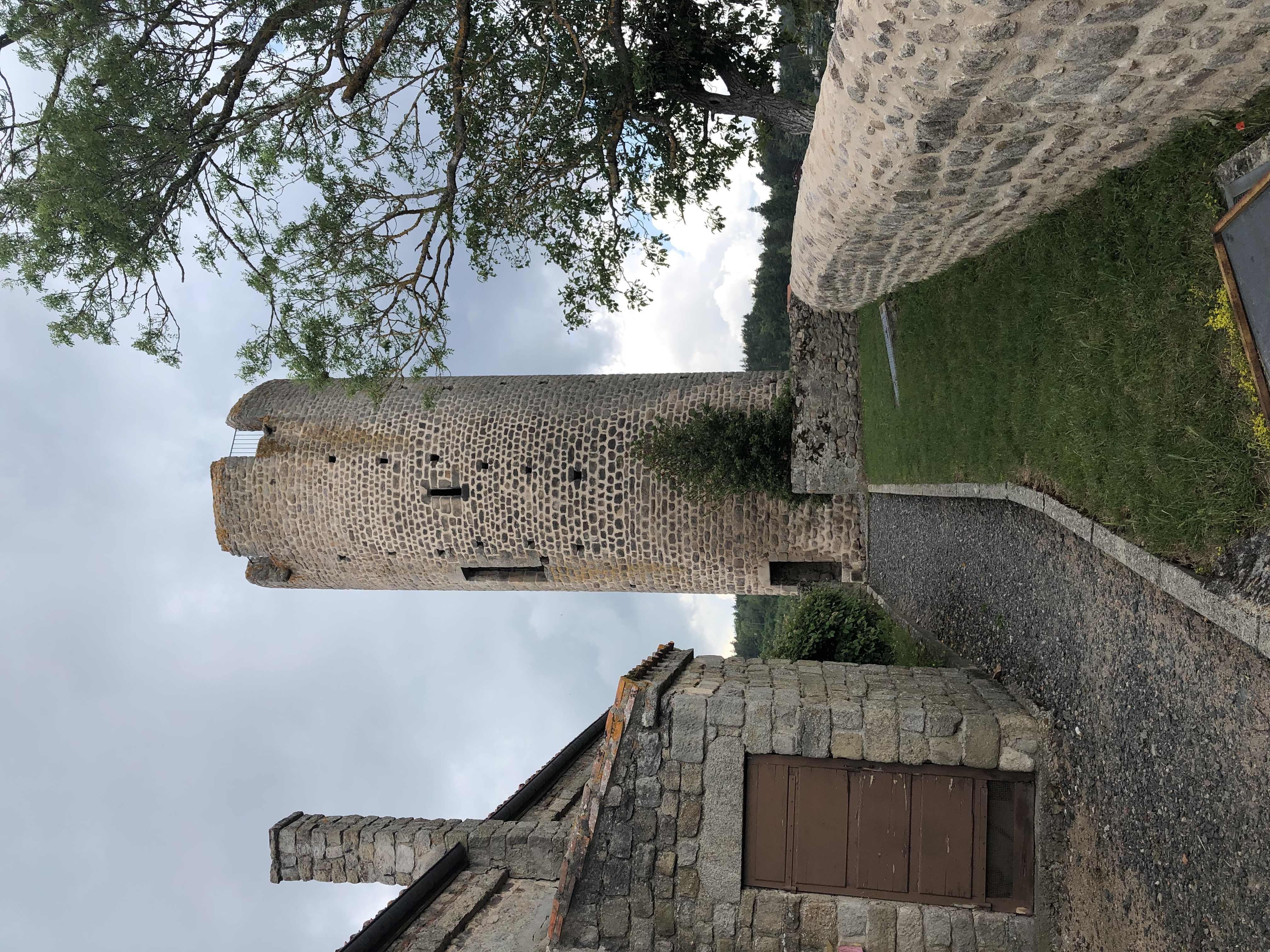 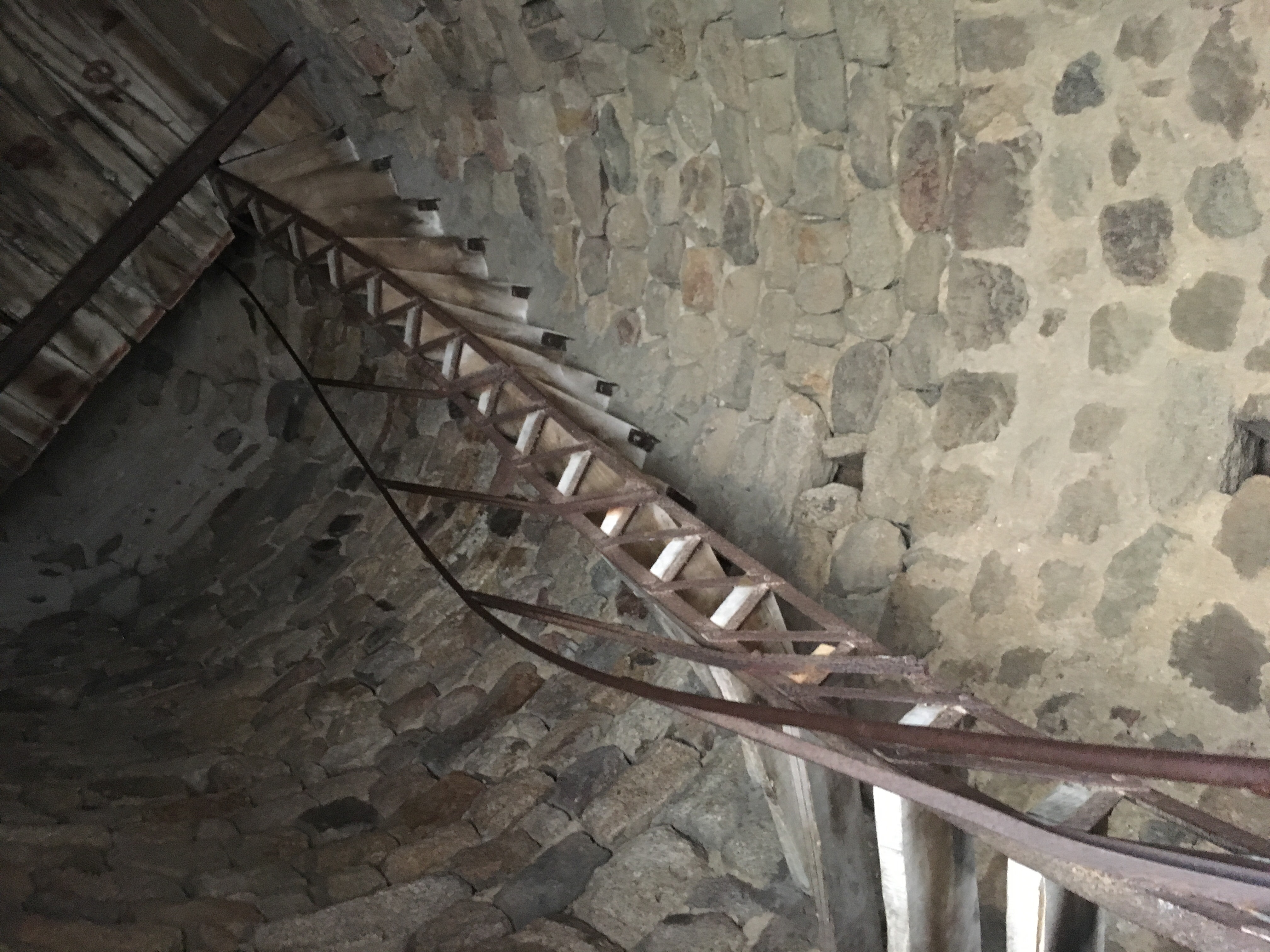 As we walked back to the tandem, the promised storm arrived. Suddenly it was absolutely lashing down, and we took shelter under the entrance to the presbytery to see whether it would blow over. After about ten minutes a lady came to ask if we’d like to shelter in her house, which was extremely generous of her. We politely declined, as the sky was already lightening, and by the time we set off down from Chambles the rain had stopped altogether. It was a glorious long, shallow descent to the valley floor, and we were very pleased with how the climb had gone.

There followed a fairly tedious ride through vaguely industrial territory, flat or slightly downhill, but into the teeth of a headwind and increasingly threatening clouds. The rain started again and within seconds we were pretty soaked. We rode along into the wind and rain, hoping that we’d leave it behind. The ‘letting the water run out of the front of the sandals’ technique we’d developed in Italy last summer came handy.

At Craintilleux the rain was just starting to clear, and we stopped at a bakery for a spot of lunch. 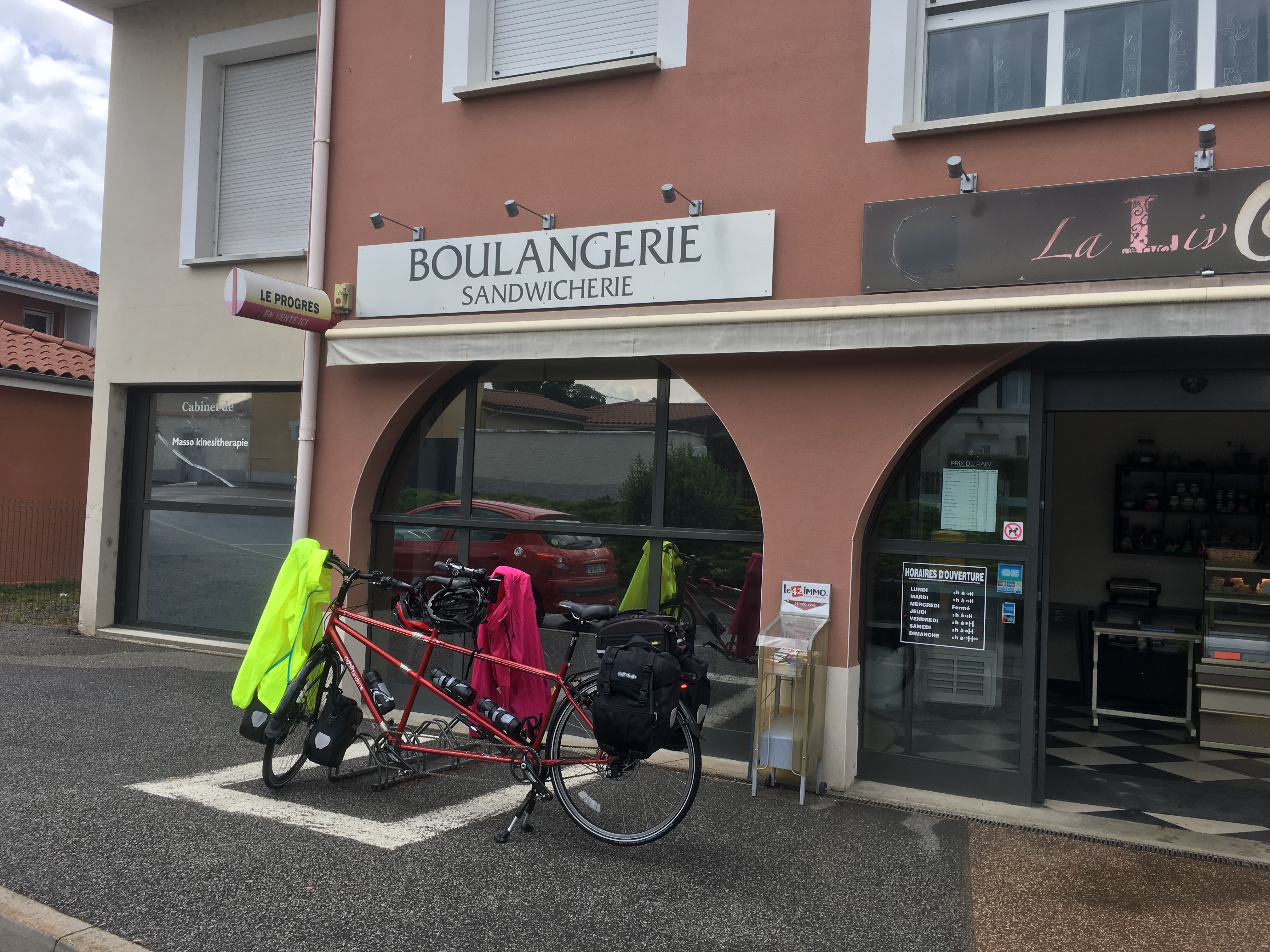 After lunch we had just over twenty kilometres to complete, and it was pretty much all through farmland. It was strange to cycling on the flat in an agricultural plain full of cows and cereal crops after all our days in the gorges. 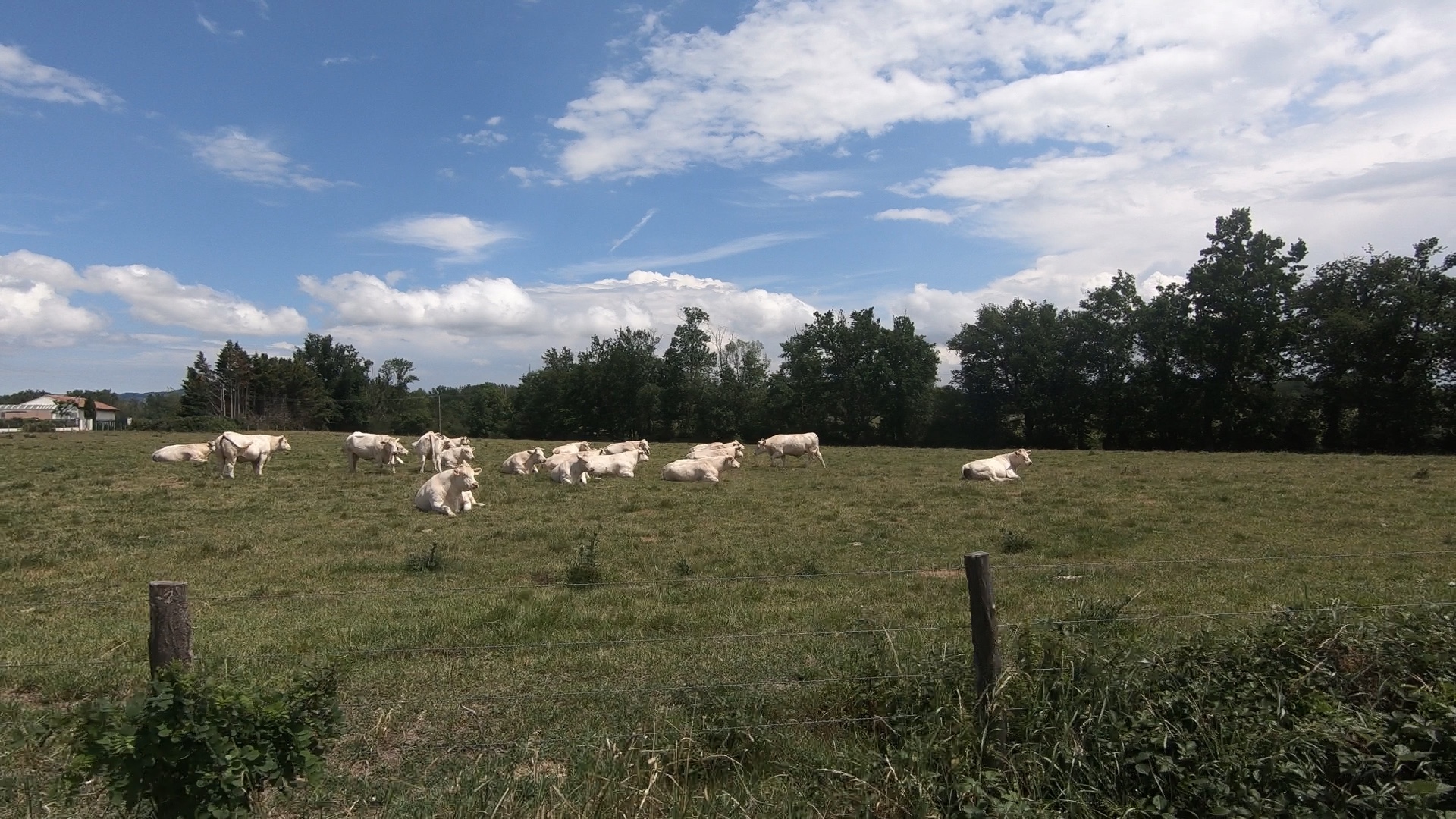 We didn’t see the Loire again at all until we crossed it to enter Feurs, where we are spending the night in a huge town-house, just the two of us. 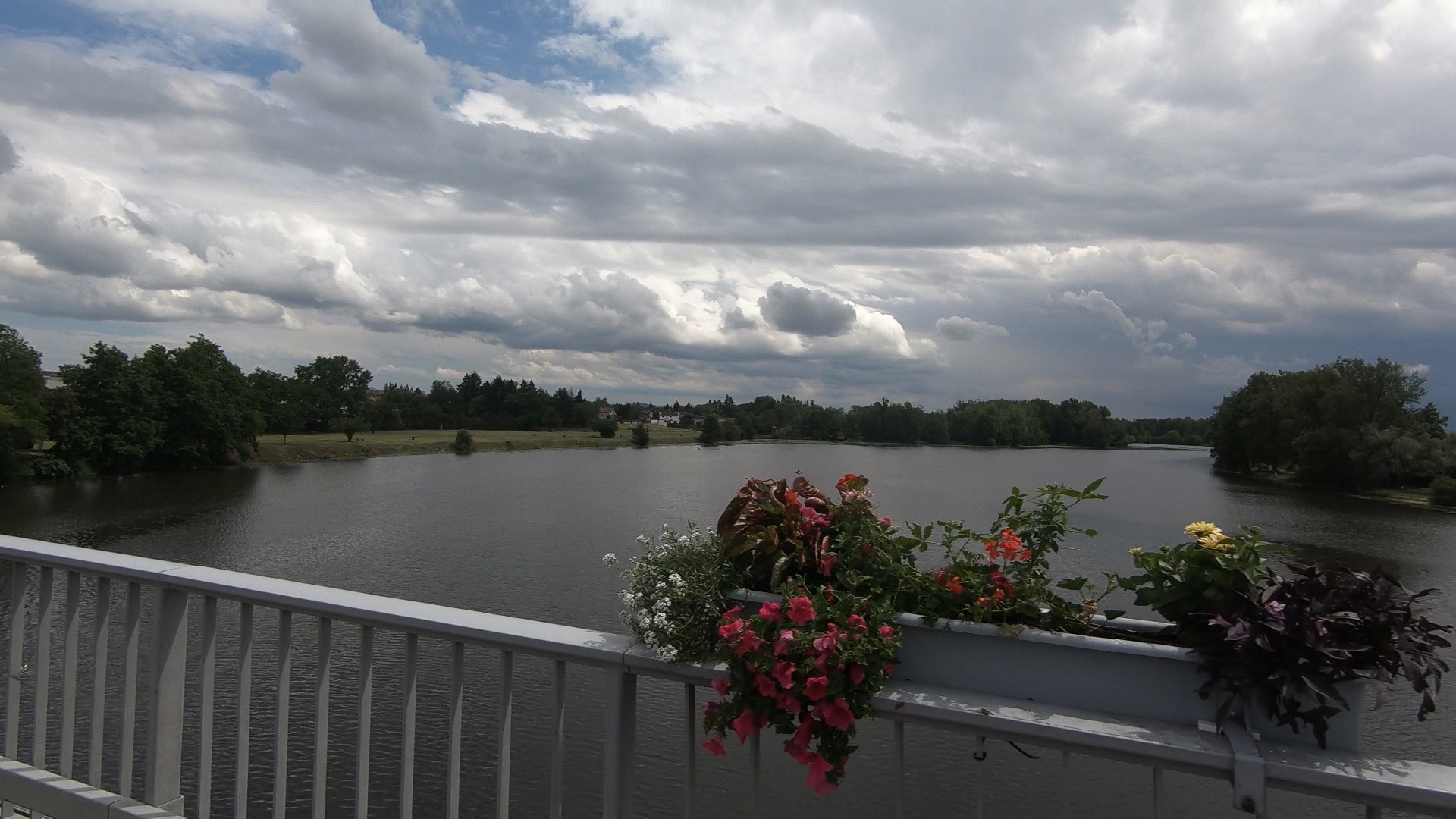 Our host was very taken with our plans and interrogated us about how we’d got to the start, where we’re going next and so on, all in French. We’ve evidently been here long enough now to be able to engage with these sorts of conversations without slipping accidentally into Italian. Funny how the brain adjusts.