The excitement of reaching the half-way point fizzled rapidly away this morning. We spent a pleasant evening in Ambleside last night, but were worried about the nature of the problem with the tandem’s freewheel hub, so had an early night so that we could be at the door of the bike shop when they opened.

Optimistically we had donned our cycling togs, but as soon as Calvin of Ghyllside Cycles pronounced the verdict we realised we would be going nowhere today. Contained in his verdict were the words “catastrophic failure of the free-wheel hub”. Oh dear. He dismantled the hub, to find a broken spring and badly damaged pawls therein. It got worse. The hub is a rare tandem-specific one, for which he did not stock spares. Gamely he tried to find appropriate components in order to effect a temporary repair, while we visited another bike shop in Ambleside in search of the necessary parts. Neither venture was successful, and telephone calls to Kendal bike shops were similarly fruitless.

We were quite worried at this stage – our prospects for moving on were poor, so we checked back in to the B&B. Desperate for a solution we rang J.D. Cycles in Ilkley. After a tense hour or so they worked out a solution whereby they could lend us an entire spare wheel (with working hub, naturally)! All we had to do, of course, was take our old wheel to Ilkley so that they could replace the necessary bits… 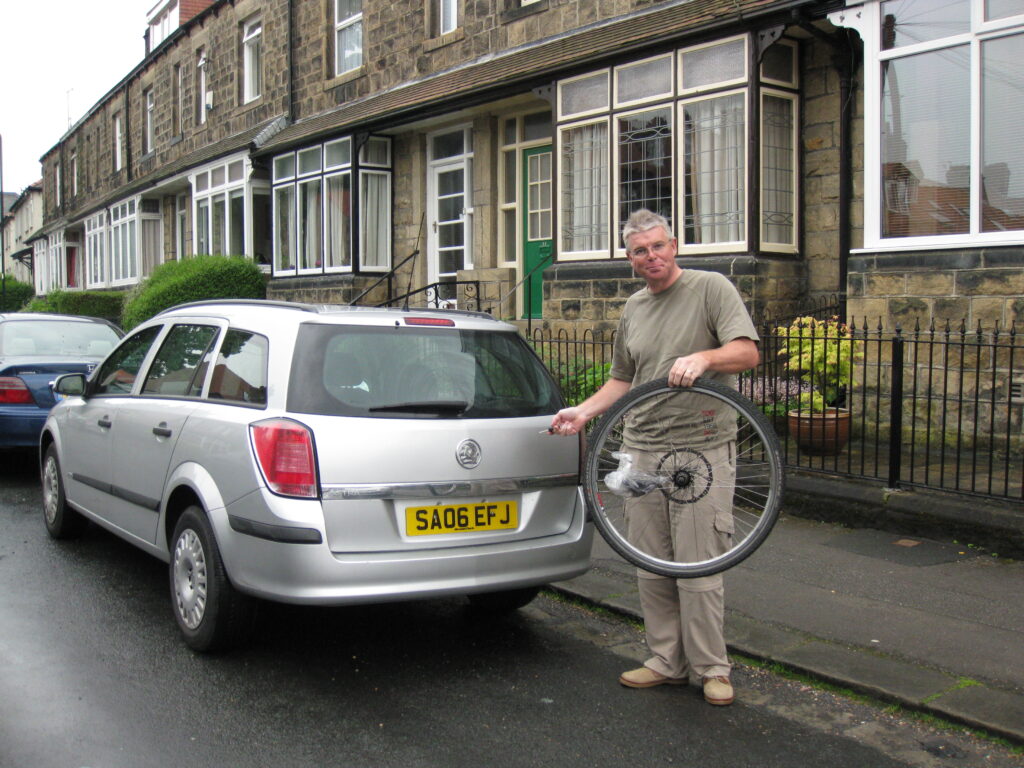 We’d resolved not to travel by car on this trip, but these circumstances dictated a brief re-think of this policy. We grabbed a taxi to Kendal, and hired a car! It felt quite strange heading back into Yorkshire this prematurely. After an hour or so we arrived at J.D., and within quarter of an hour we were leaving the shop with a fully-functioning wheel. We wondered whether we would be spotted by anyone we know, and joked about starting rumours that we’d just been lying low rather than cycling up the country!

By 3.30 p.m. we were back in Kendal. The eye-watering cost of the taxi from Ambleside to Kendal persuaded us that, now that things were not quite so urgent, we should take the bus back. The car-hire people generously drove us to the bus station, and we headed back to Ambleside. Calvin and Pete at Ghyllside greeted us, and got straight to work fitting the wheel, and giving the tandem a thorough once-over. All is now well, and tomorrow we move on, thankfully.

What a way to spend the Captain’s birthday! Still, we’re restored to mobility and the weather forecast for tomorrow is better. So on to Carlisle we go. Grateful thanks are due to the good people at Ghyllside Cycles, Ambleside and J.D. Cycles, Ilkley. Onwards and Northwards!