The restaurant we’d picked out in advance turned out to be closed last night, but the one we finished up at instead was fabulous – lovely food, an excellent bottle of local wine, and even a neighbourhood cat who dropped in for a chat and a fluffle. 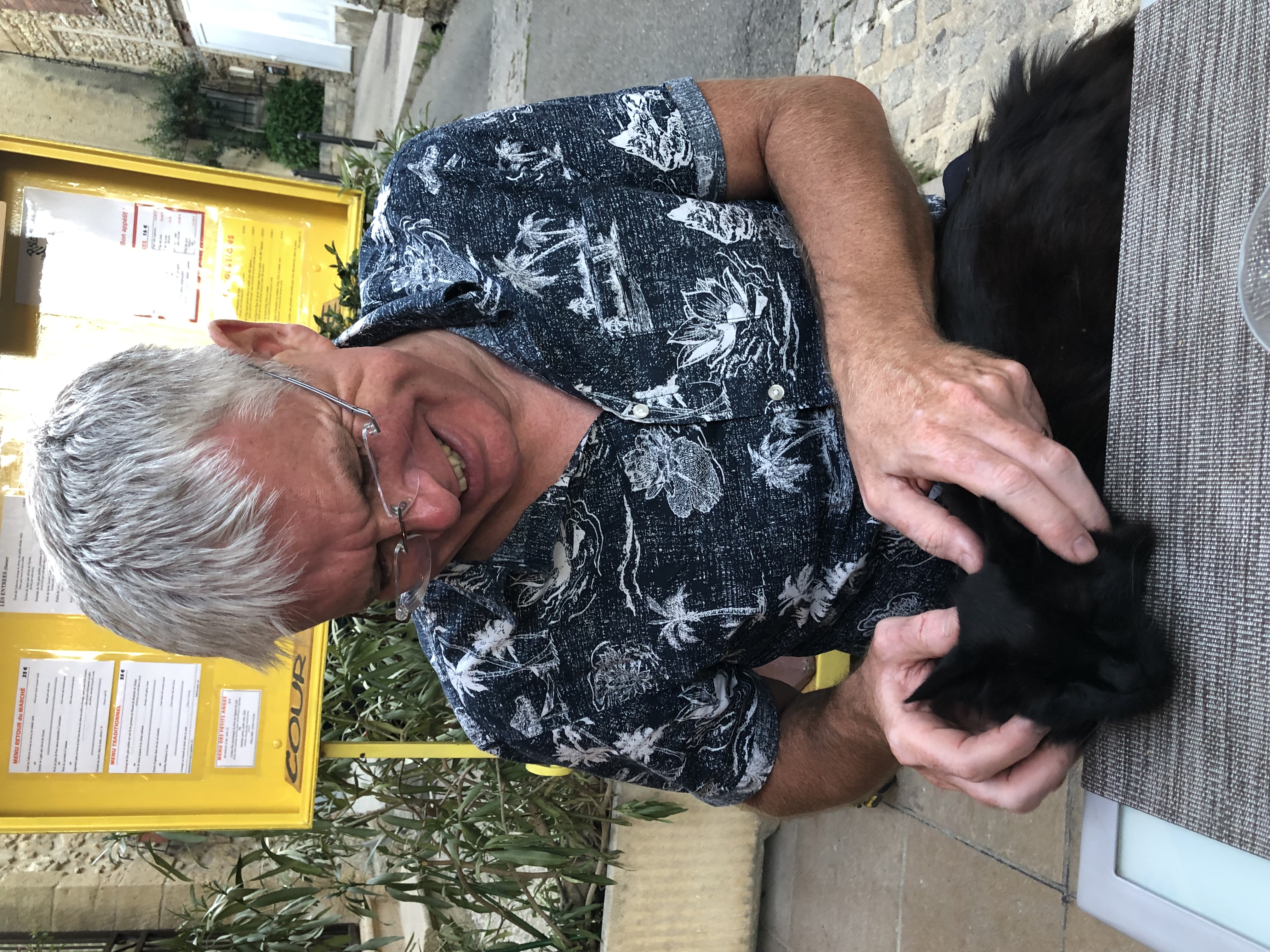 Châteauneuf had been a great place to spend a night, although very one-dimensional in its focus, nothing but wine producers and in huge numbers. Still, if you’re going to specialise in one thing, wine is a good one to choose!

Our host had arranged for her ‘bon père’ (father-in-law, I think?) to come in the morning to release the tandem from the tasting cave where it had spent the night. 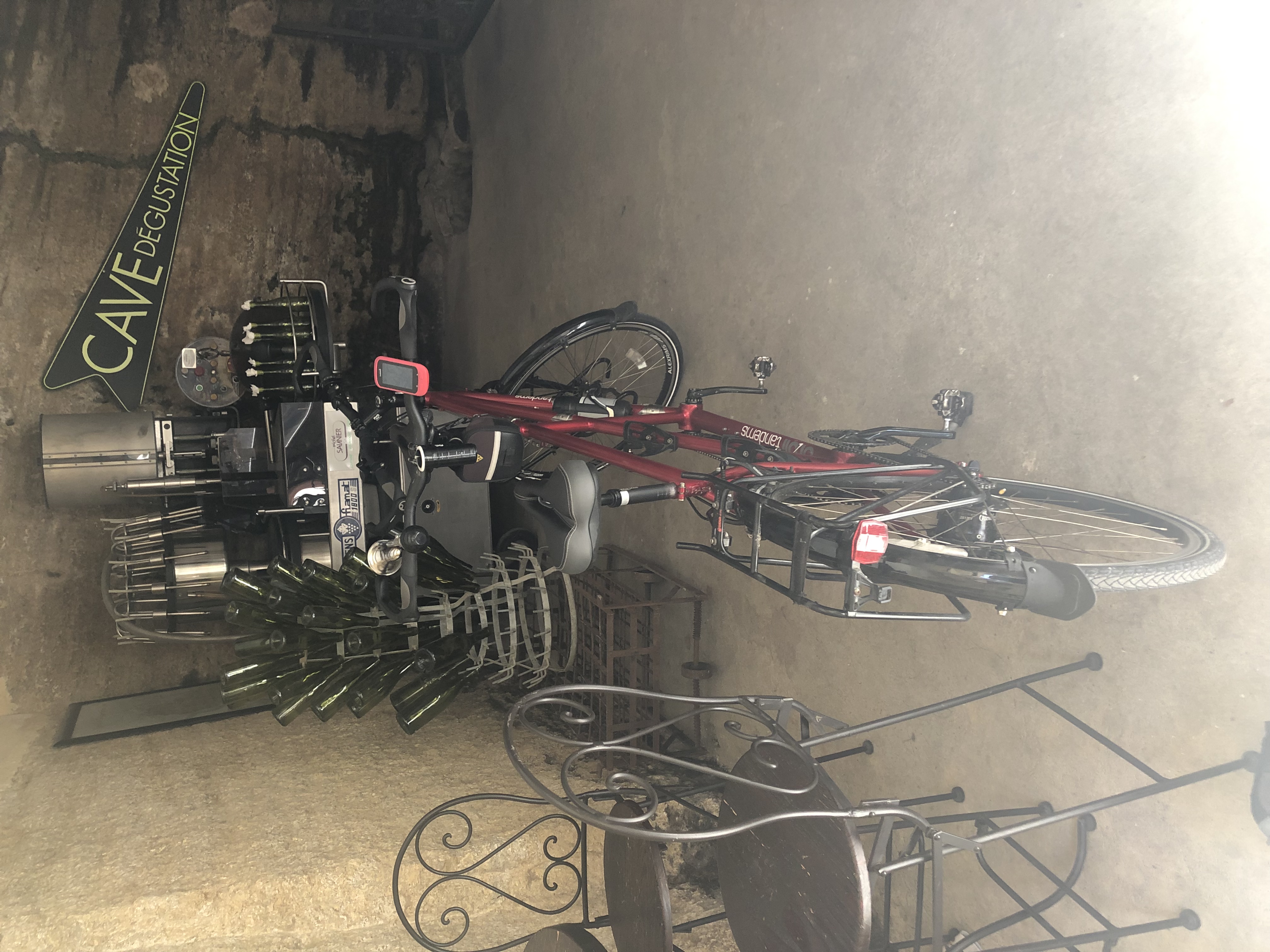 He was a keen cyclist and a fellow tandemist, the second we’ve encountered on this trip, after our hosts in Le Bourg d’Oisans. He gave us some good tips for our route today, and for cycling through the Ardèche Gorge tomorrow, and saw us on our way with a cheery ‘au revoir’. The people of the Vaucluse have been wonderfully warm and friendly.

The first part of our route was back out towards the Rhône, the way we came in to Châteauneuf-du-Pape yesterday. The sun was shining, the sky was azure and there was even a slight breeze to keep us cool as we pedalled along. It was all rather idyllic. There were vineyards on both sides, birds singing and only the occasional blast of a French military jet doing training manoeuvres to remind you it was the twenty-first century.

We rode along a wonderful cycle path for a while, utterly alone on a little green track. 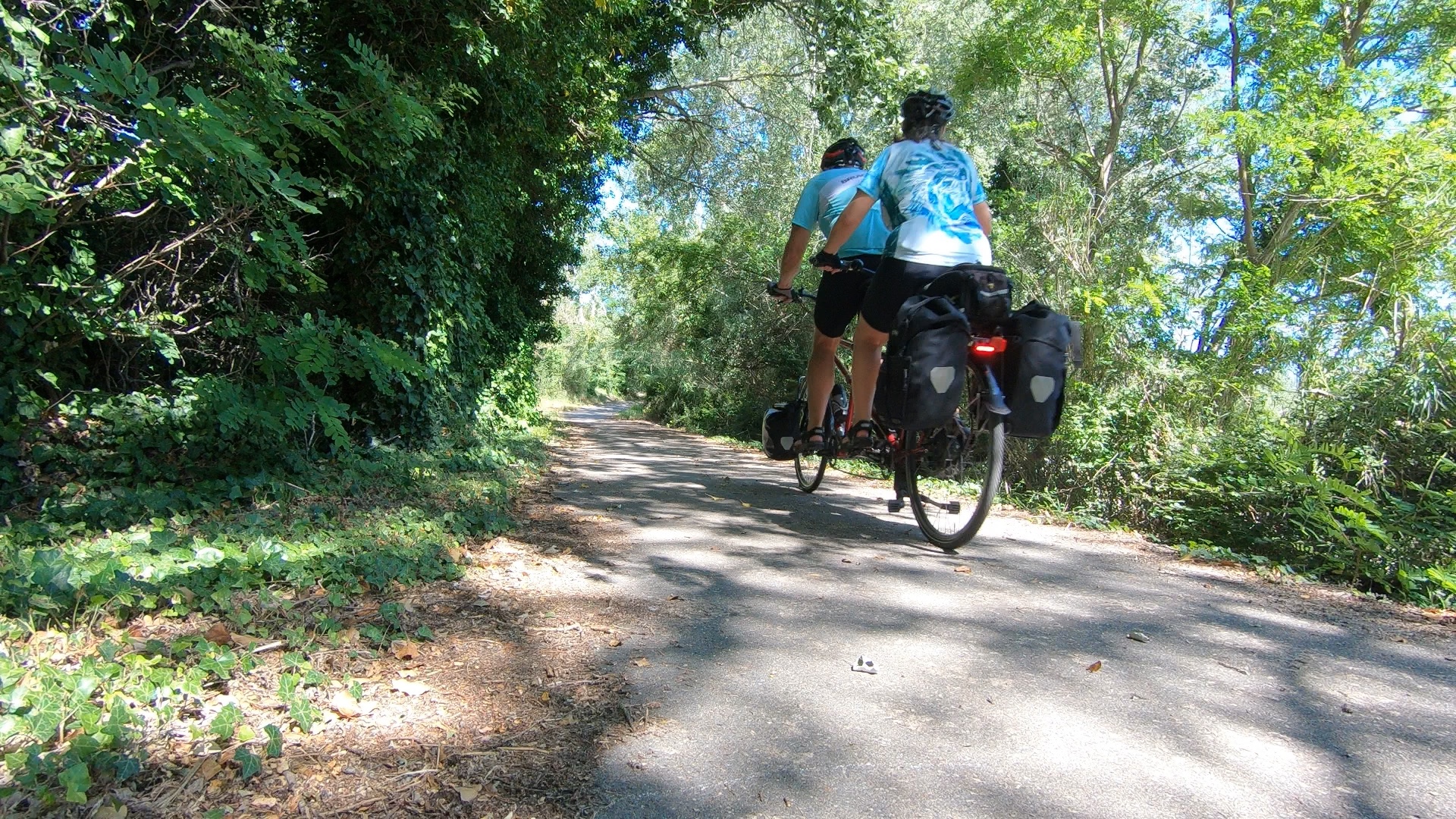 We crossed the Rhône in two hops just before Codolet, in each case crossing a huge lock onto or off an island in the river. The first lock was in full flow. 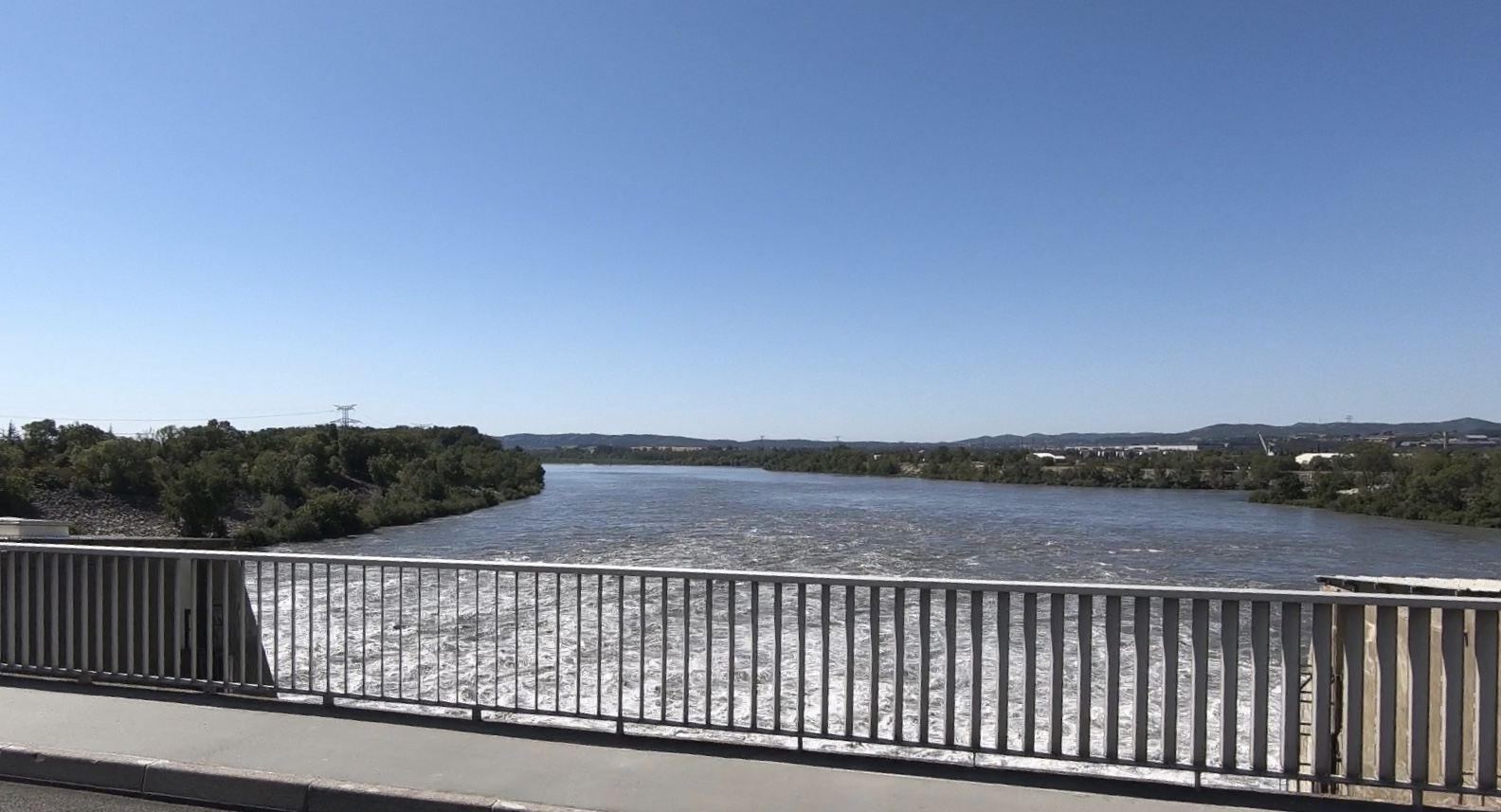 The lock-keeper gave us a cheery wave as we rode past, and it was interesting that he had the same little harness and yellow lock-operating box round his neck that we saw the lock-keepers using during several French houseboat holidays. Such a tiny box to operate such a huge lock system! The drop in the water levels before and after the lock must have been nearly ten metres.

Just along the river was the huge nuclear power plant at Marcoule. Our advice this morning had been that the road deteriorated badly at this point, and it did, becoming quite rough. There was some resurfacing work going on, and consequent contraflow traffic arrangements in a couple of places, neither of which we got through in a single green light phase, but the traffic was light and no-one seemed to mind. 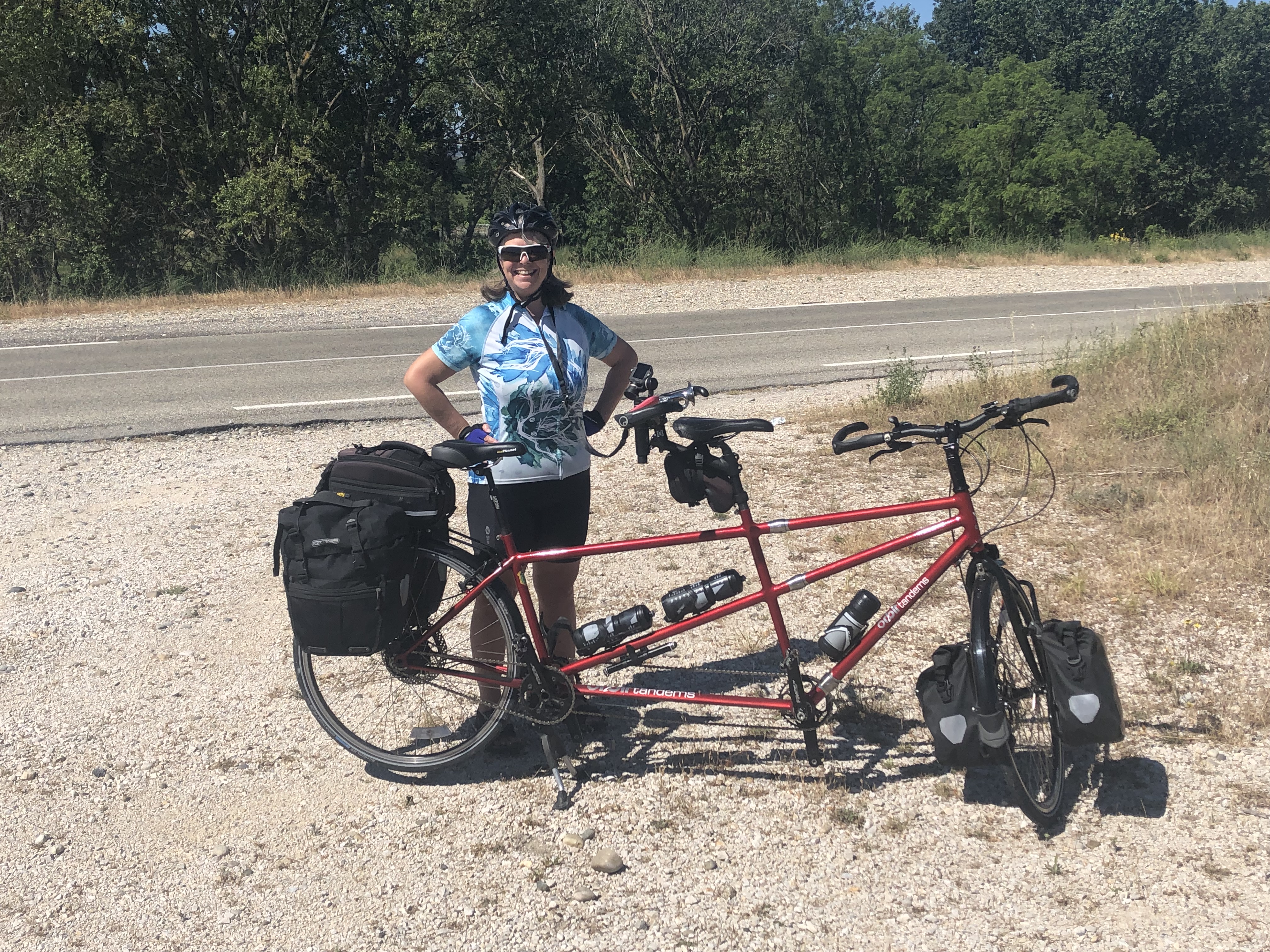 We’ve both been quite struck by the differences between cycling here in France and on our long trip last year in Italy. The French drivers in this area so far are all very considerate of cyclists, passing us very wide and quite happy to wait if there’s a bend or traffic coming the other way. It’s a contrast to the more excitable Italians – we always felt safe there, but their approach to working around cyclists was much less relaxed.

We followed the Rhône all the way to Pont-Saint-Esprit, seeing swans and houseboats and the wide, wide river. 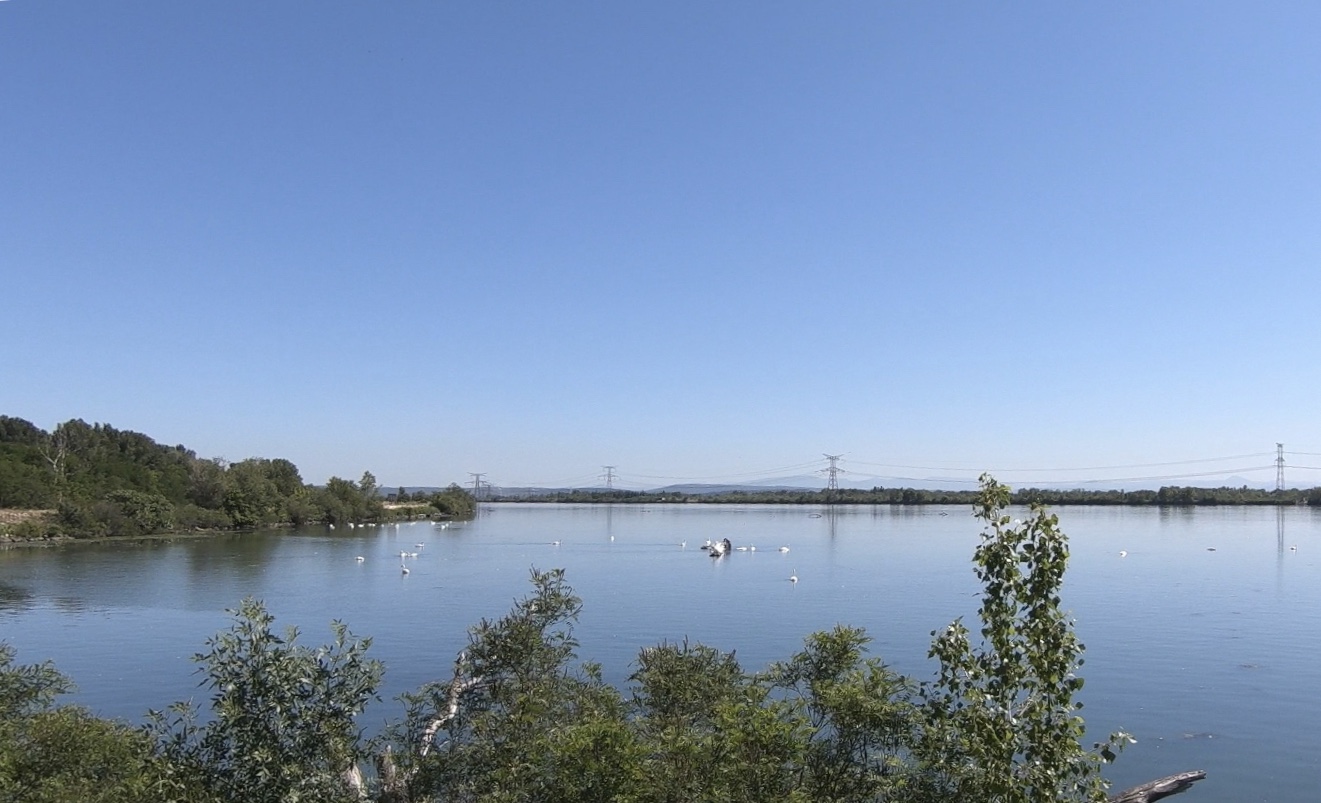 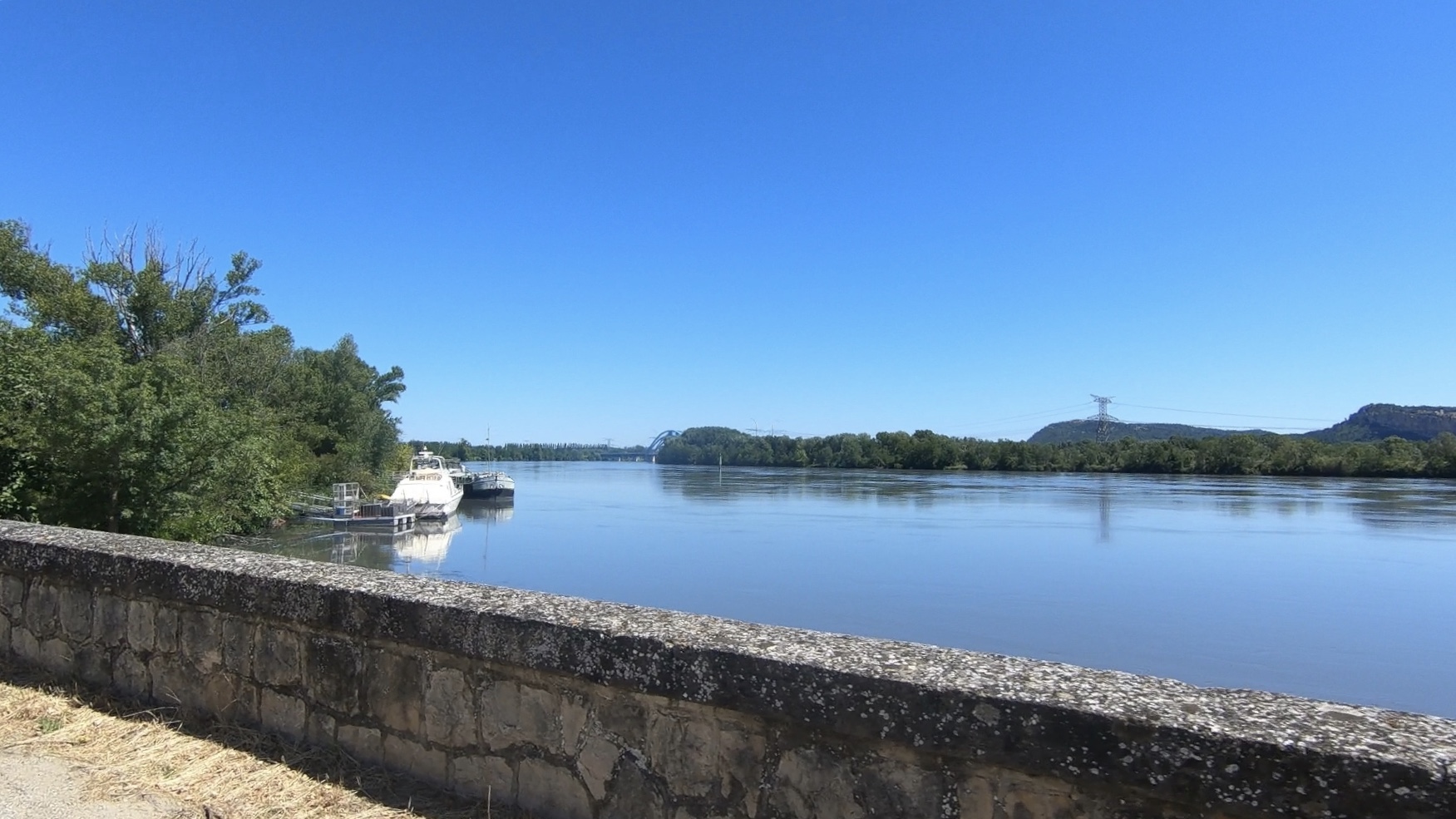 We stopped for lunch in Pont-Saint-Esprit. It was pretty hot, but our selected bar had those overhead misting nozzles, which periodically emitted a fine spray to cool the diners. Very refreshing.

After lunch it was time to bid farewell to the Rhône at its confluence with the Ardèche river. We also waved goodbye to the Giant of Provence, Mont Ventoux, which has been a constant feature on the horizon. 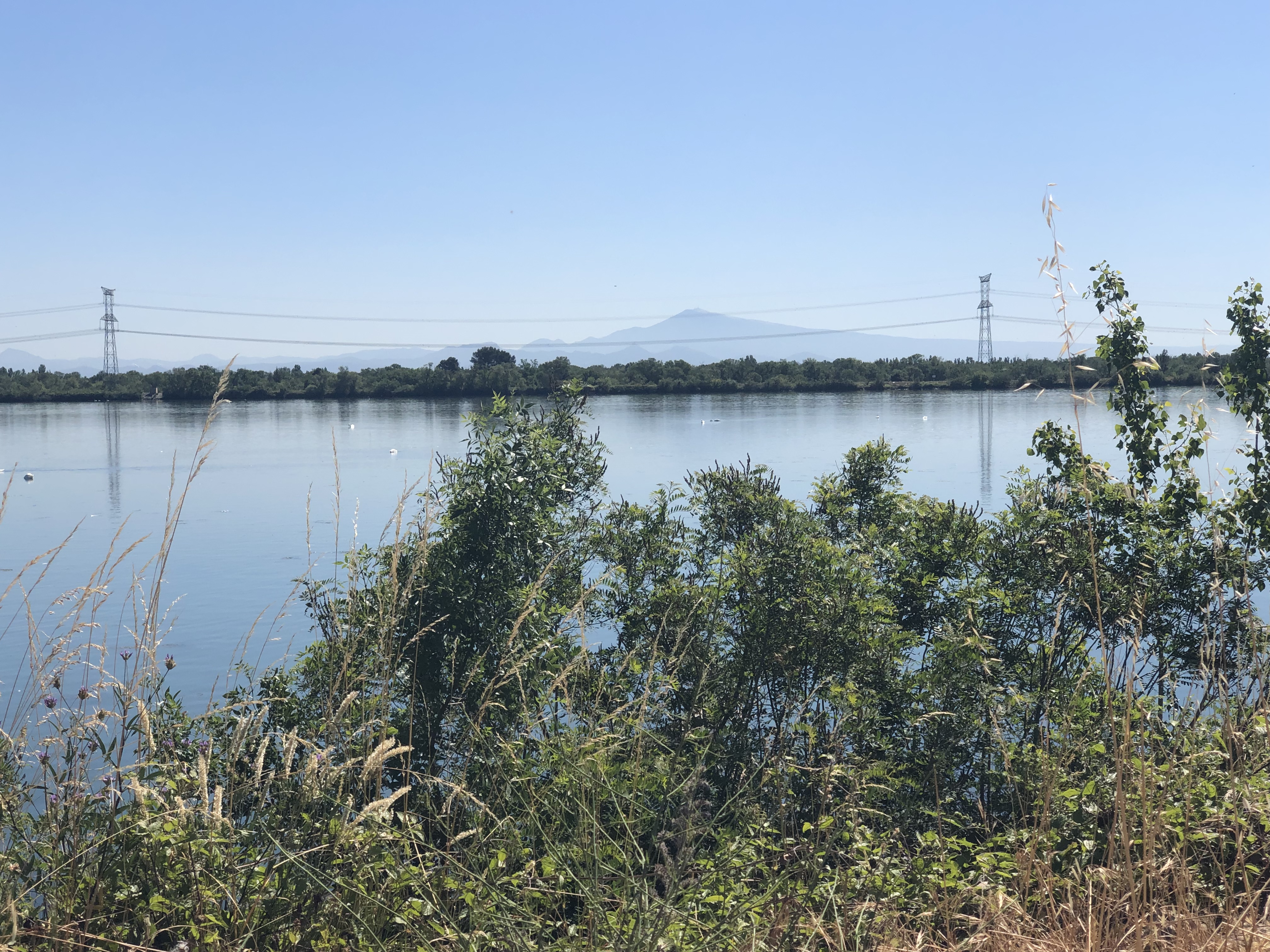 One last look back as we turned west along the Ardèche. Yep. Still massive.

Unsurprisingly, the nuclear power plant we’d passed, and another nearby meant that the views were now full of enormous pylons marching in all directions, looking like they were asleep. 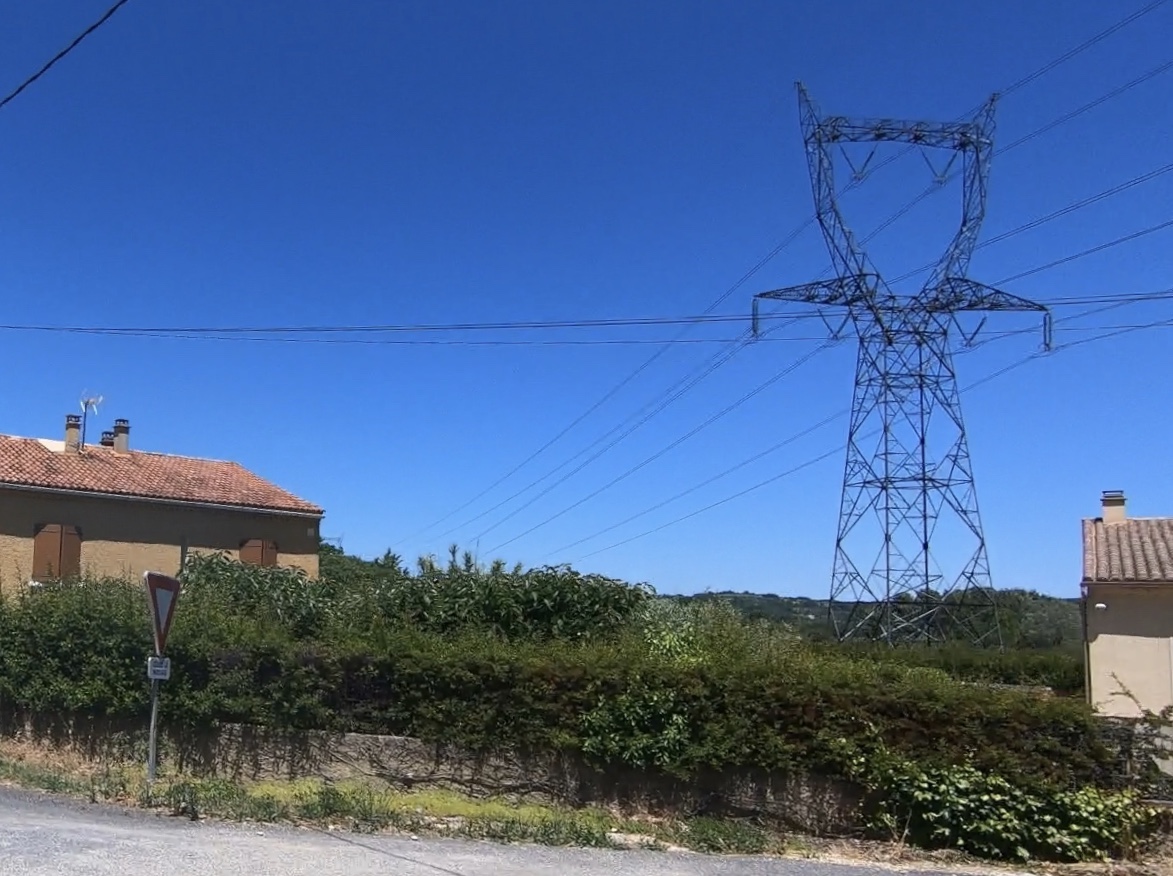 We passed a field of the lavender for which Provence is famous. It was just coming into flower, a beautiful colour and scent. 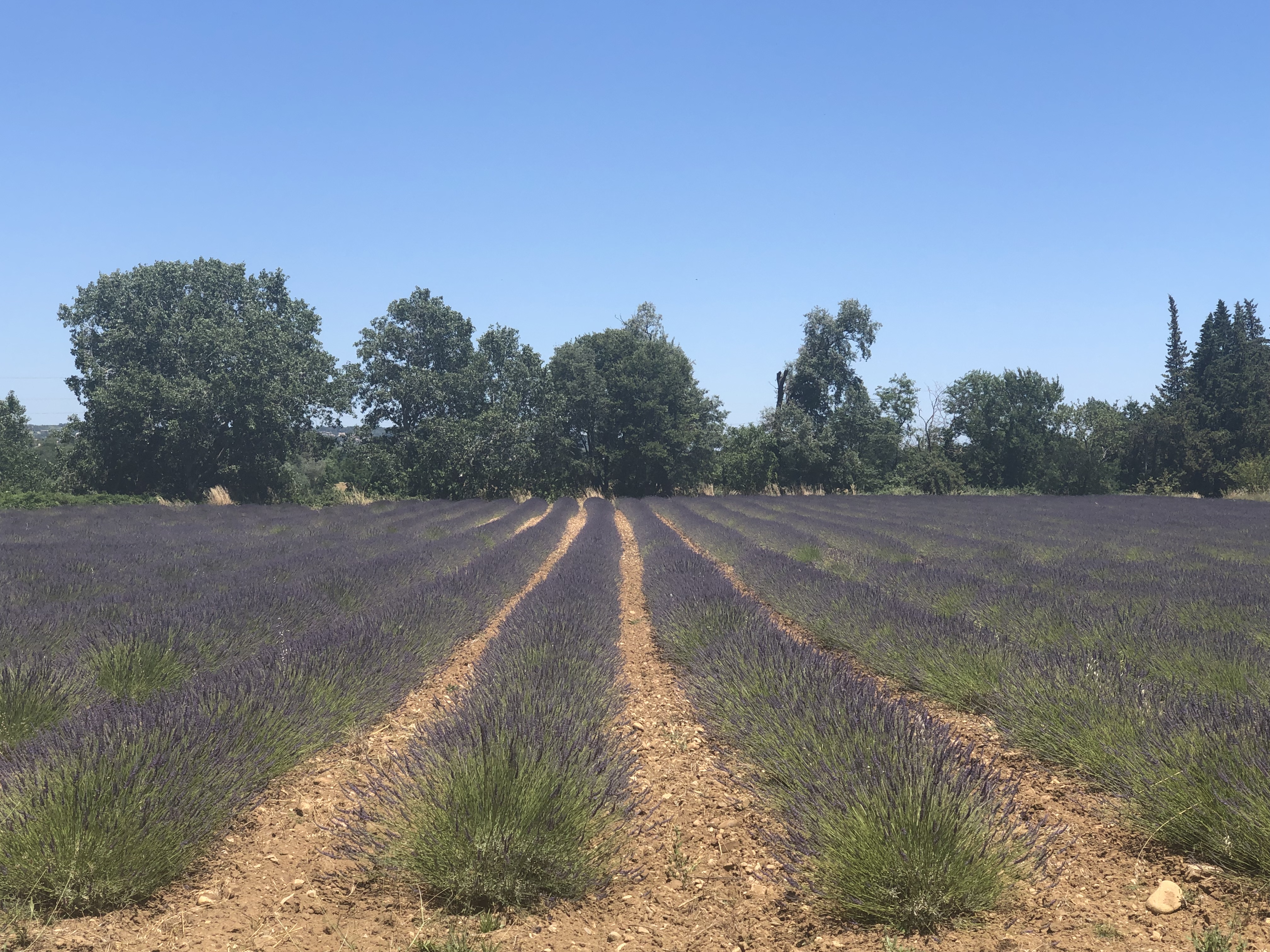 All of a sudden, we hit the Ardèche Gorge, riding over a little suspension bridge right in front of our hotel. 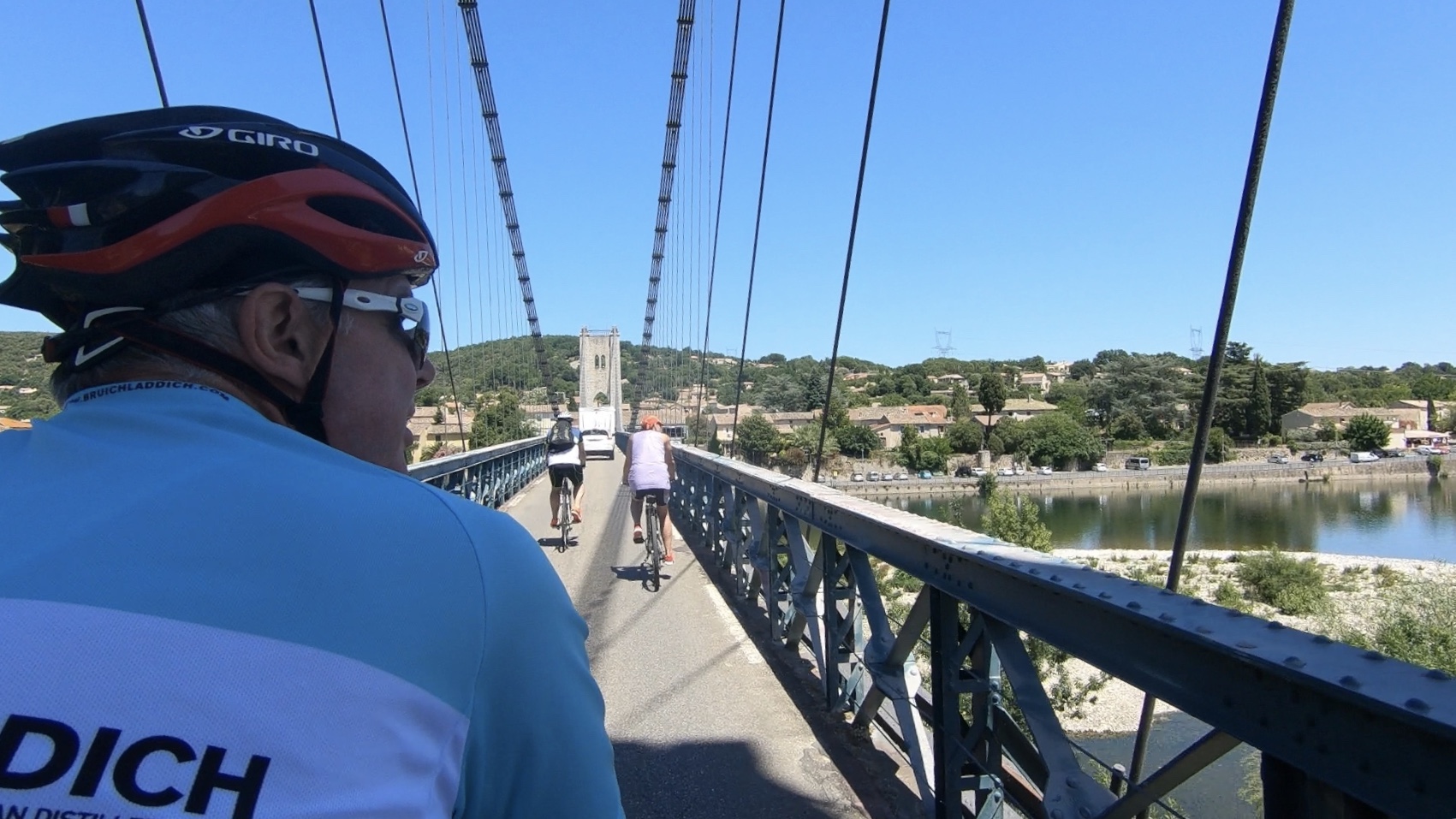 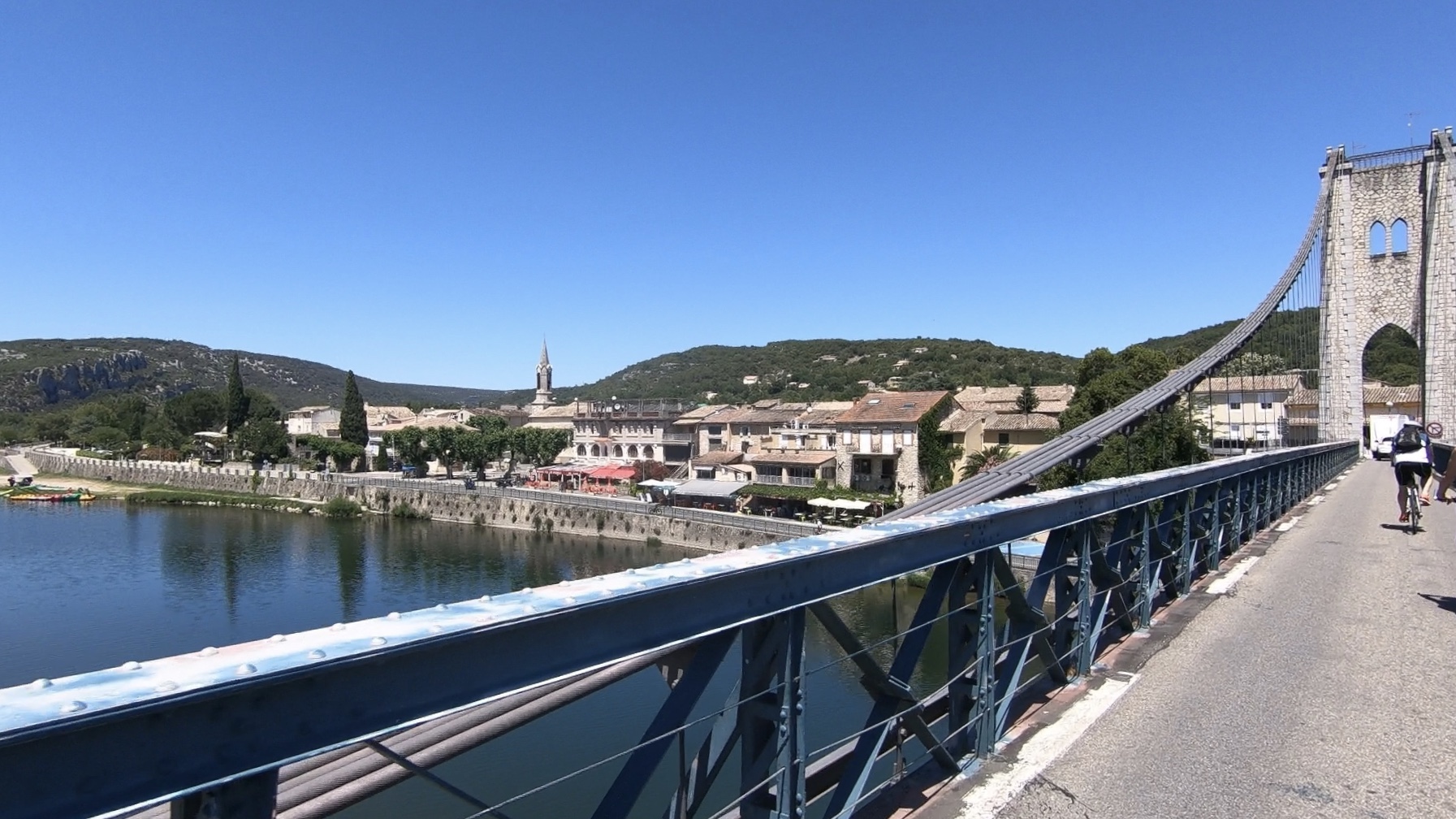 St Martin d’Ardèche looks lovely, it sits at the bottom of the gorge, most of which we will ride tomorrow. It’ll be much more up and down, but the views should be fantastic. Stay tuned!

P.S. I have painted my toenails in the colours of the French flag. How cool is that?! 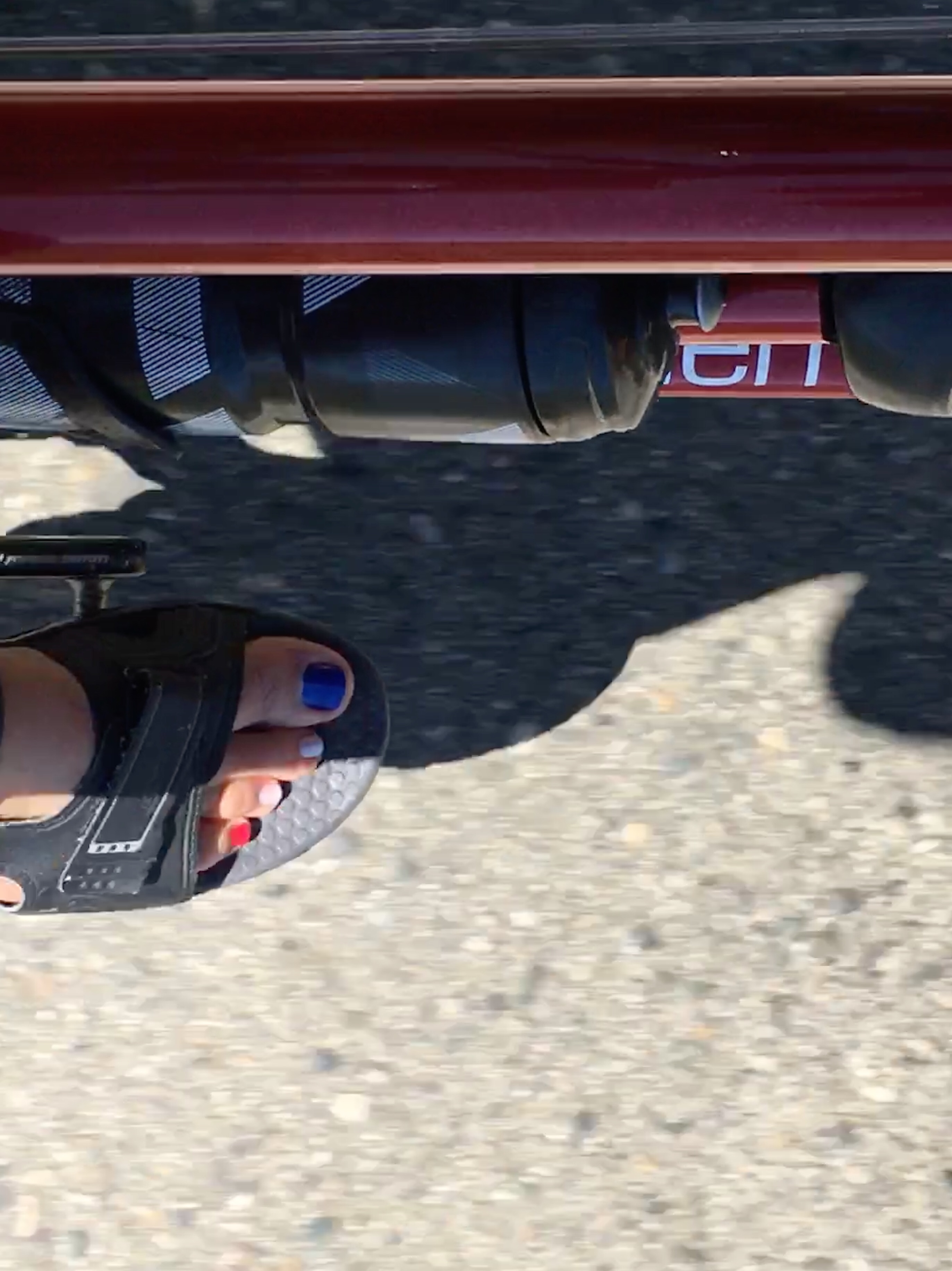