Three days off! We enjoyed our time in Rome with Joshua, huge thanks to him for coming out to meet us with our resupply. Including the Captain’s two right gloves. He was well rewarded with pizza and gelato, of course! We saw some of Rome’s sights together in searing heat, gosh it was hot. None of them need explanation really, so here’s a small selection of what we did: 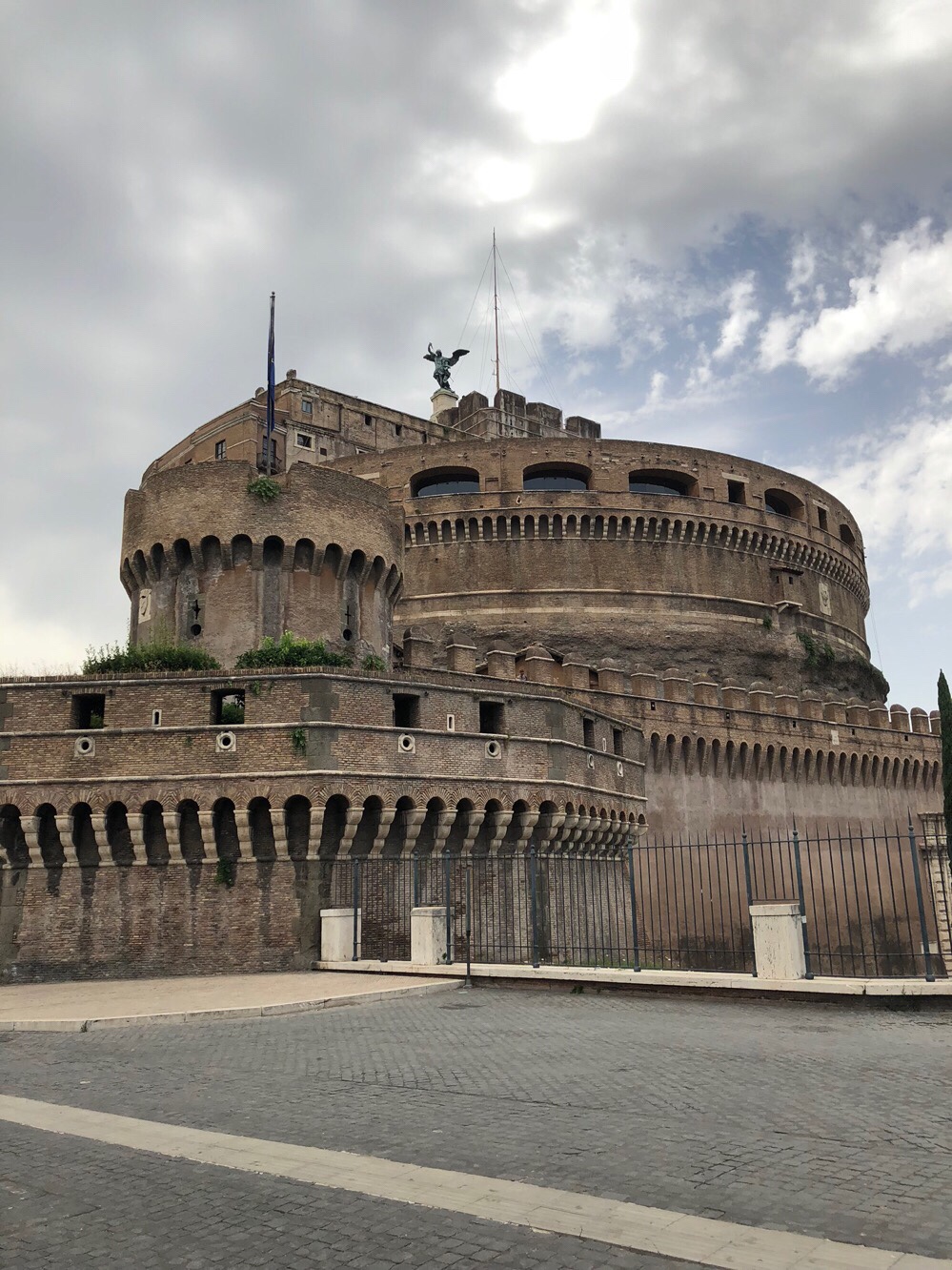 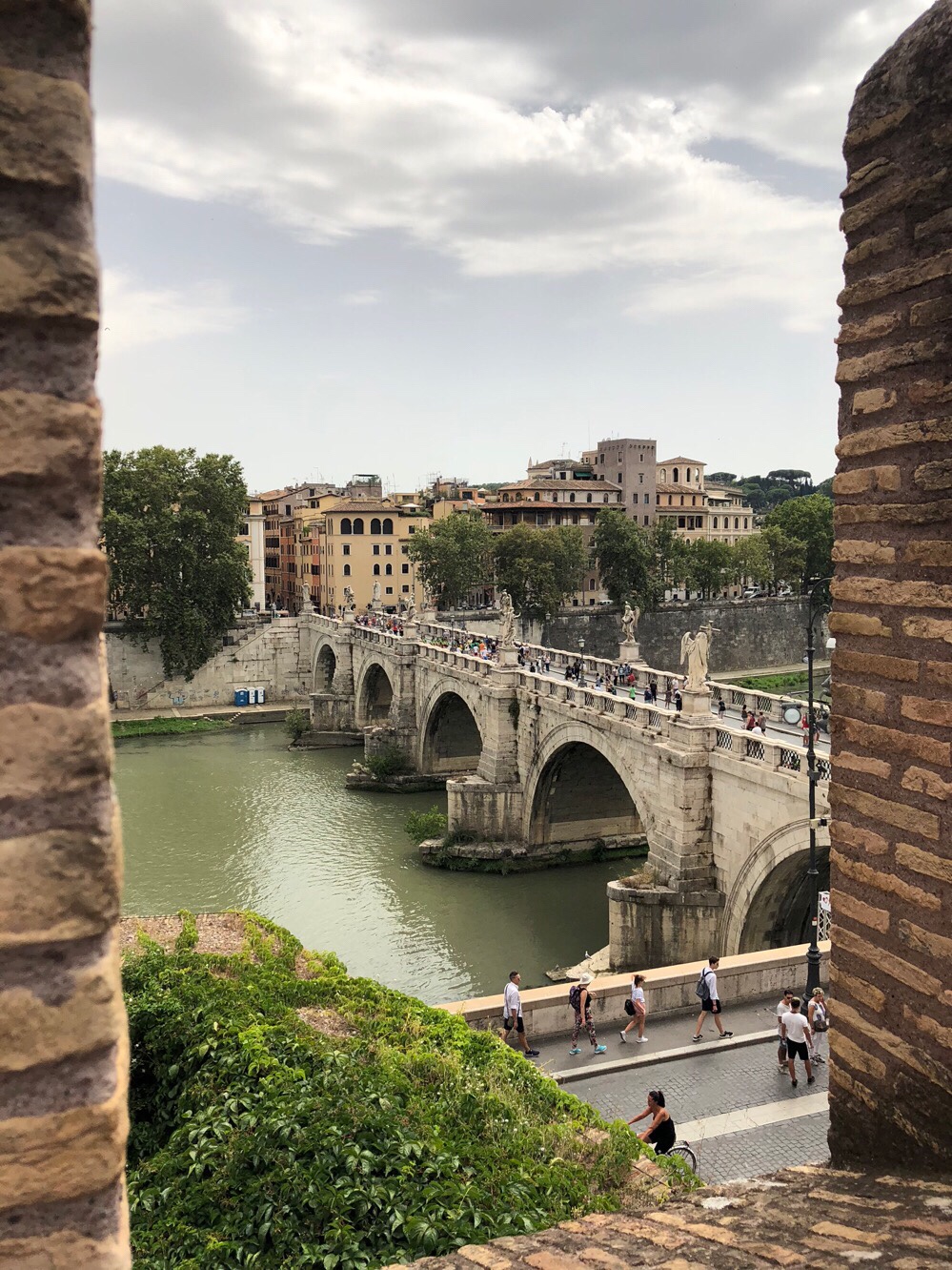 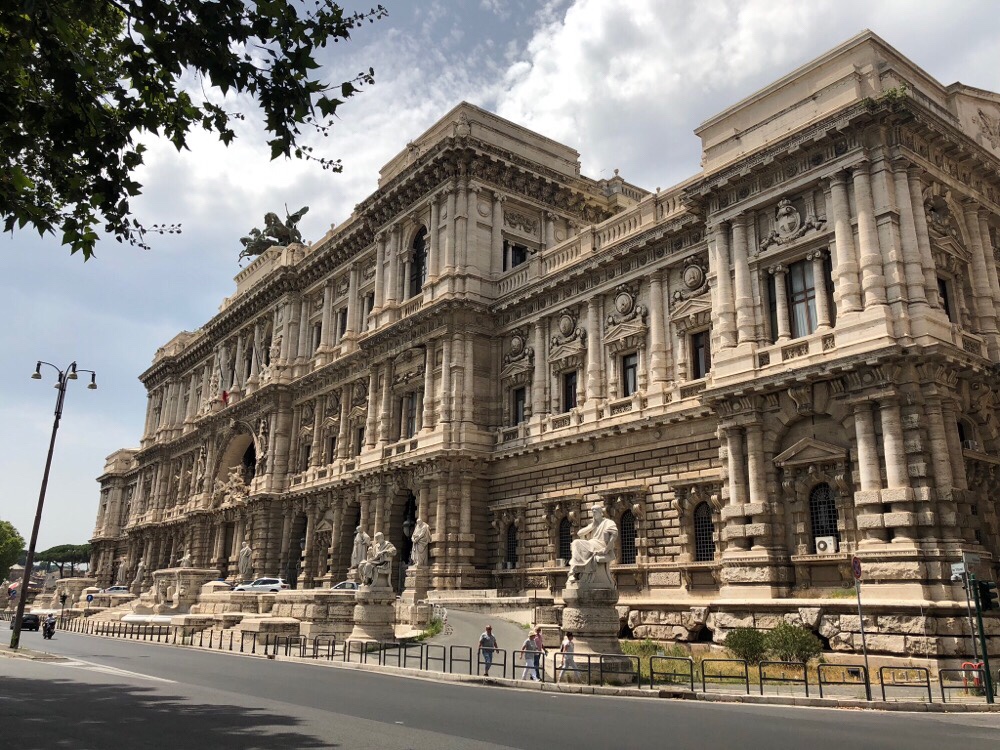 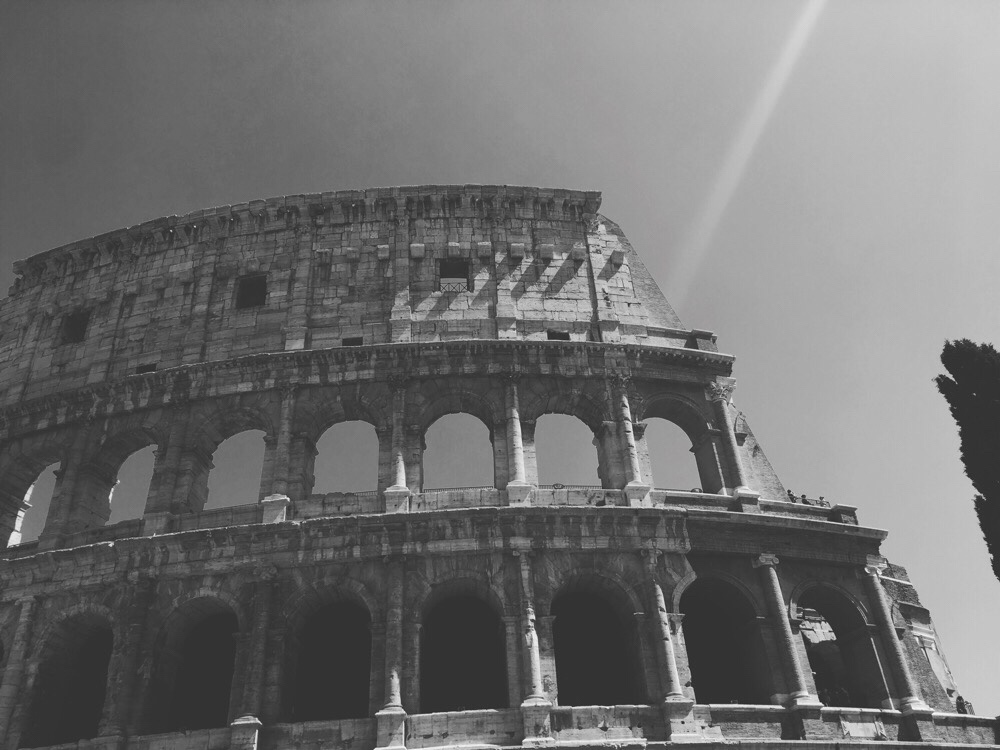 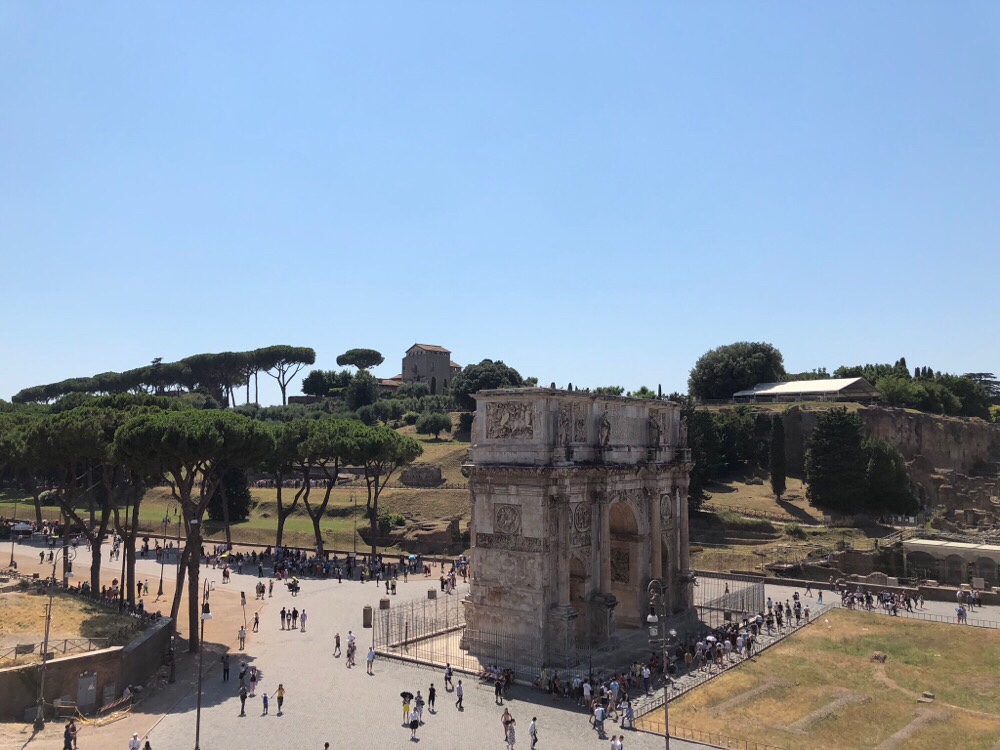 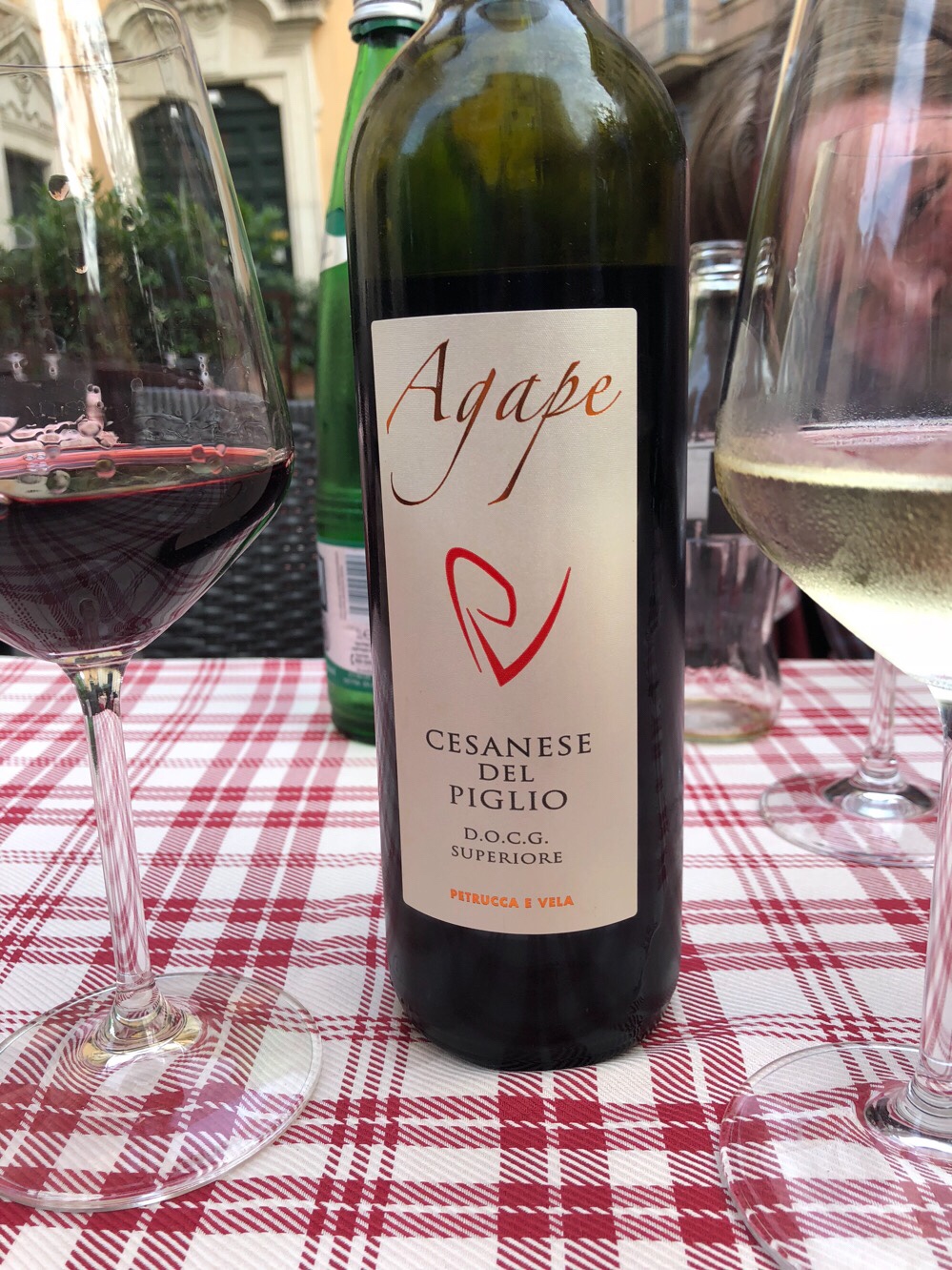 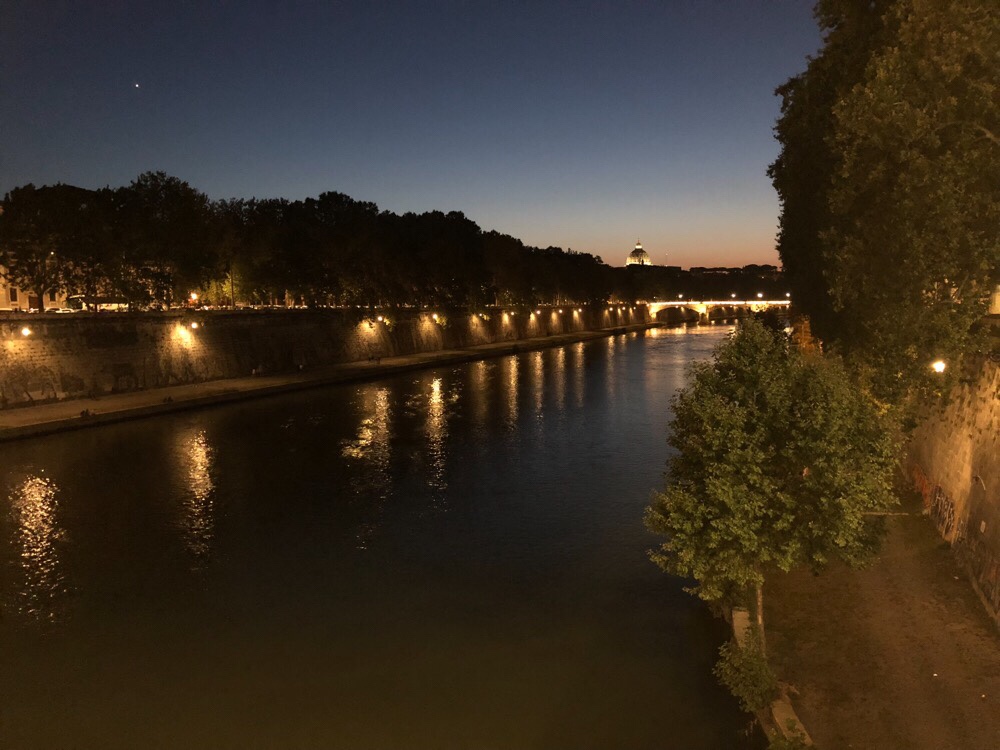 Joshua left yesterday morning with a suitcase full of our returning ‘first half’ clothes, plus some things we don’t need (arm warmers, socks – what were we thinking?!), and some pasta in interesting shapes and colours from the market at Campo dei Fiori. We spent the day relaxing, doing some onward planning, trying to decide what to do about the route south of the Palinuro peninsula and so on. It felt rather strange this morning packing all our new stuff in the panniers and climbing back on the tandem.

We weaved through the now familiar streets of Trastevere back to the Tiber cycle path, exactly where we’d left it on Thursday. And with that we were off. The first fifteen kilometres were along the cycle path, not as interesting as the route in, possibly because as we rode away from the centre, the suburbs were inevitably more modern, more grotty, just what you’d expect. 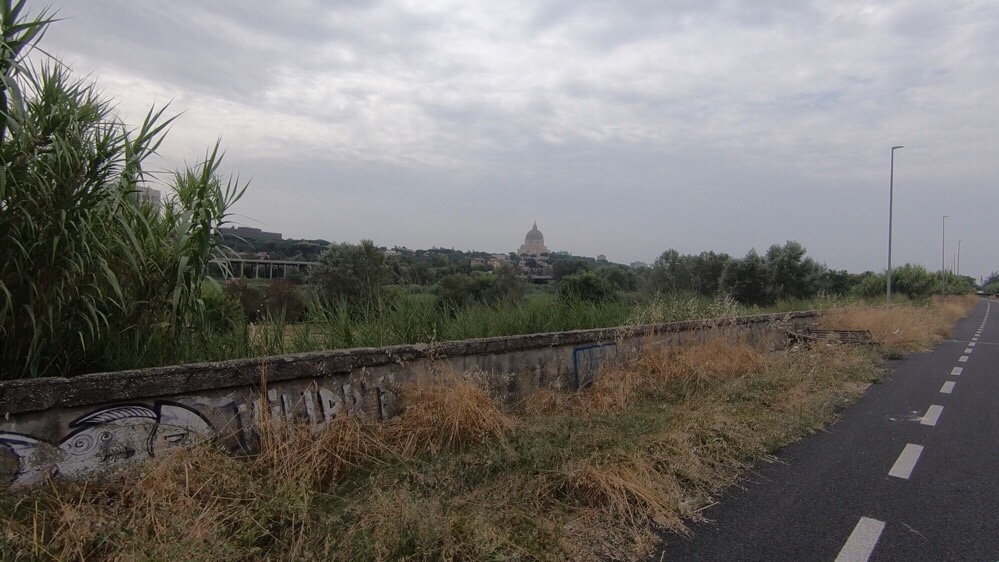 Eventually we got to the end of the cycle path, which is marked by a round symbol thing and some benches… 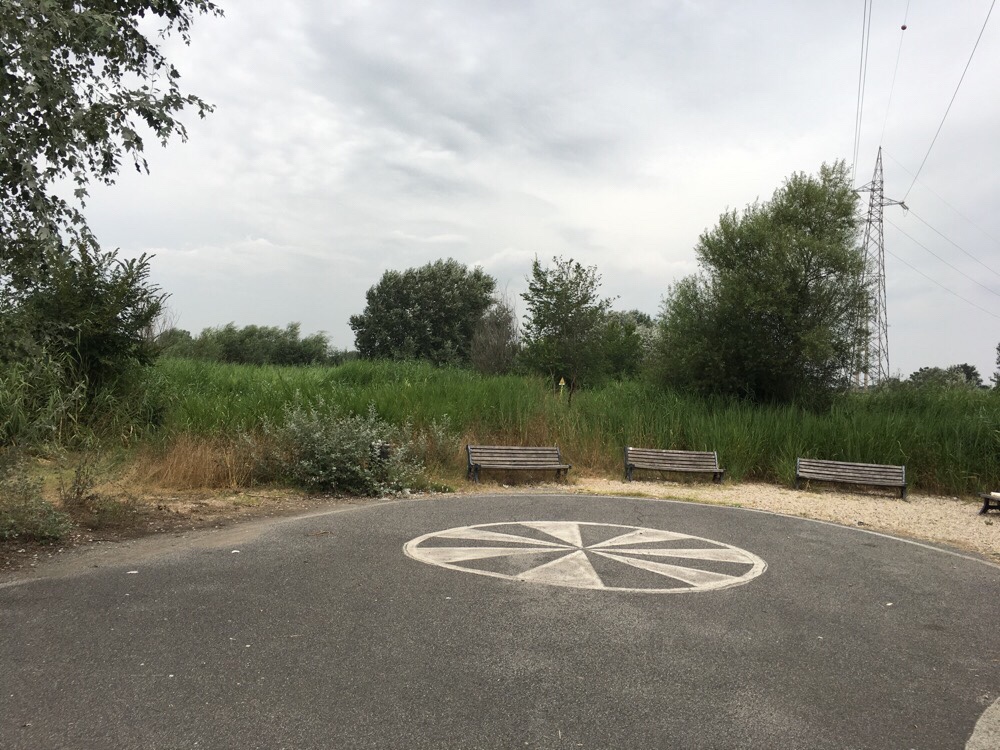 … and no apparent way to get from it to outside of the huge ring-road autostrada. It had been the same getting onto it at Labaro, really tricky, why they didn’t just build a tiny bit more at either end to handle the enormous Tangenziale road is a mystery.

Still, kudos is due to the authorities of Rome for building such a safe and sensible way to cycle in and out of the city, and we felt quite proud of ourselves for having done it in its entirety.

Even having minutely studied on Google maps the exit from the path and the way to get onto our route to Frascati, it was still quite hairy, with some getting off to check that we weren’t about to join the autostrada, some turning around, and some mild swearing. After some faffing, we were there, and although it was not pretty, it was heading in the right direction.

And then, gah, signs on the roadside the the road ahead was closed for roadworks. We pushed on in the vague hope that we might walk the bike through, often that’s possible. Once there, though, it looked unlikely, and we turned around with everyone else. We couldn’t find the road which looked like it would take us around, and while we were wondering what to do next a local van driver came over to give us some advice. He was a bit non-plussed as to why we were not going a more direct route to Frascati in any case, but seemed satisfied with the explanation that smaller roads are better on a bicycle. He suggested that it might be possible to walk through, so we went back and asked the workers in our best Italian, but they wouldn’t let us or anyone else through.

The van driver’s diversion seemed awfully long, so we tried one more alternative, but that was a dead end too. A young man came out to help as we were turning around once more, and confirmed the van driver’s route as the only viable option.

So. A ten kilometre diversion to get around 300m of road works. There were no tantrums, but there was definitely some more swearing! We had a quick lunch in a fuel station’s cafeteria, which was much nicer than it sounds, and then got on and got it done.

After the diversion, we rejoined our original route, which took us pretty close to Ciampino airport. Lots of traffic. Very satisfying cycling past a huge queue of cars!

And then, gah again – big blocks of concrete where there was supposed to be a level crossing across the railway line. Bizarrely all the level crossing infrastructure was still there, lights flashing, barriers going up and down, but there was really no way through. So diversion number two would have to be enacted.

At this point, just to top off the day’s annoyances so far, our accommodation host for tonight messaged to cancel on us at the last minute! This was going to be something new, then, arriving in Frascati with nowhere to stay!

Remarkably neither of us felt very panicky about it – we knew there had been lots of accommodation available when we’d booked ours, so we decided to get there and just wing it.

And that’s what we did. Frascati is a hill town, so it was a bit of a slog up, but we’re safely installed in a pleasant hotel in the centre, a good 10€ cheaper than it would have been via a popular hotel booking website. Which is nice!