We went back to the Pizza Anfiteatro last night and had a square pizza (square!) in the evening sunlight. 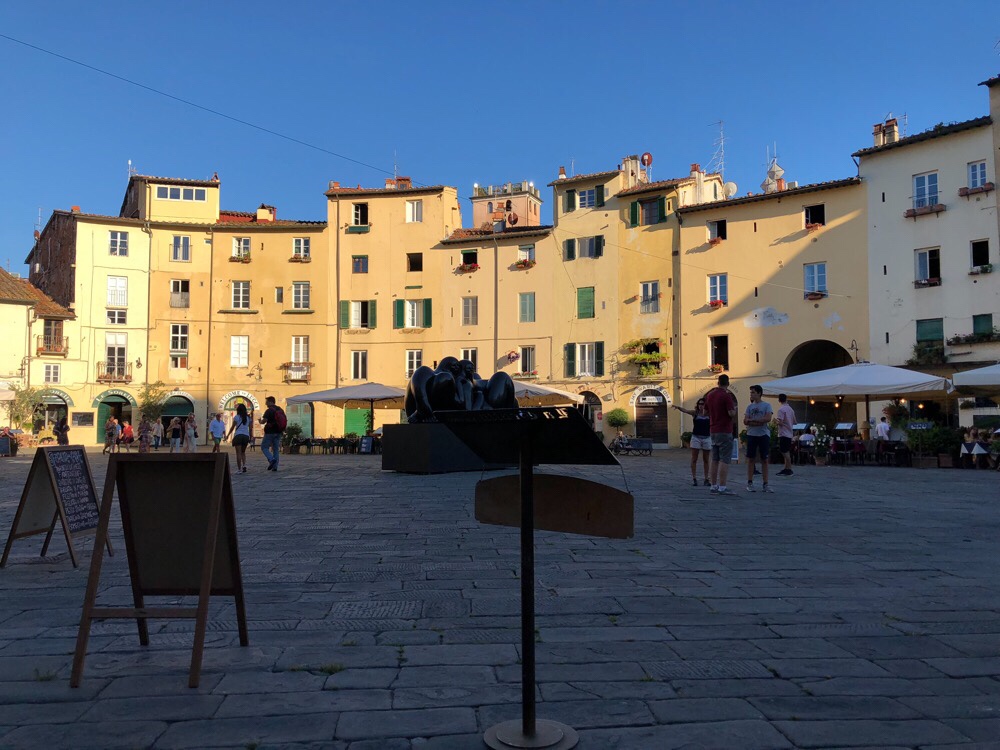 It was a great place for people-watching, there were hordes of tourists (including ourselves, of course), but it was good-natured and the smiley restaurant staff seemed to be coping just fine. What a long summer they still have ahead of them. We swung past Puccini’s birthplace on our way back to the apartment, and after a small grappa each as supplied by our host, we turned in.

Breakfast was taken inside Lucca’s walls, after which we braved the real world once again, escaping almost immediately onto a lovely tiny green road. There were a few cheery cyclists out today, going the other way, so we didn’t have to try and catch them. 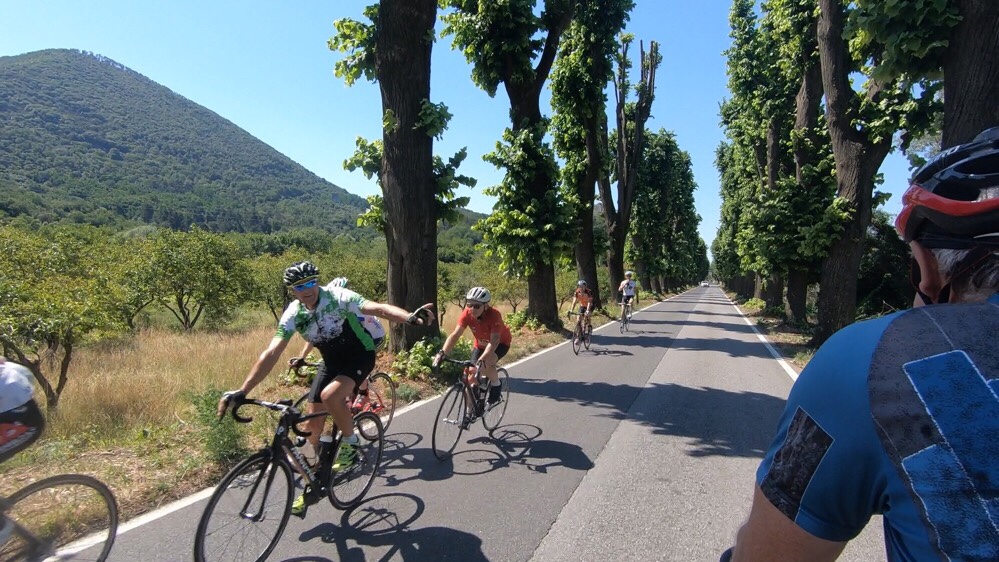 Our objective today was to get to Pisa, see the sights, and then head east to Cascina, a little town on the way to Chianti. We’d plotted a route on little roads, which were initially lovely. Then we hit the Pista Ciclabile di Puccini. Puccini’s Cycleway. It was anything but ciclabile, Puccini must have had a quad bike to get round some of those craters! We diverted to the parallel road, which was fine, and then suddenly very, very straight, leading right into Pisa and giving us a great distant view of its famous tower, albeit from an angle which made it look perfectly straight itself.

We wheeled into the Piazza dei Miracoli, and there it was. 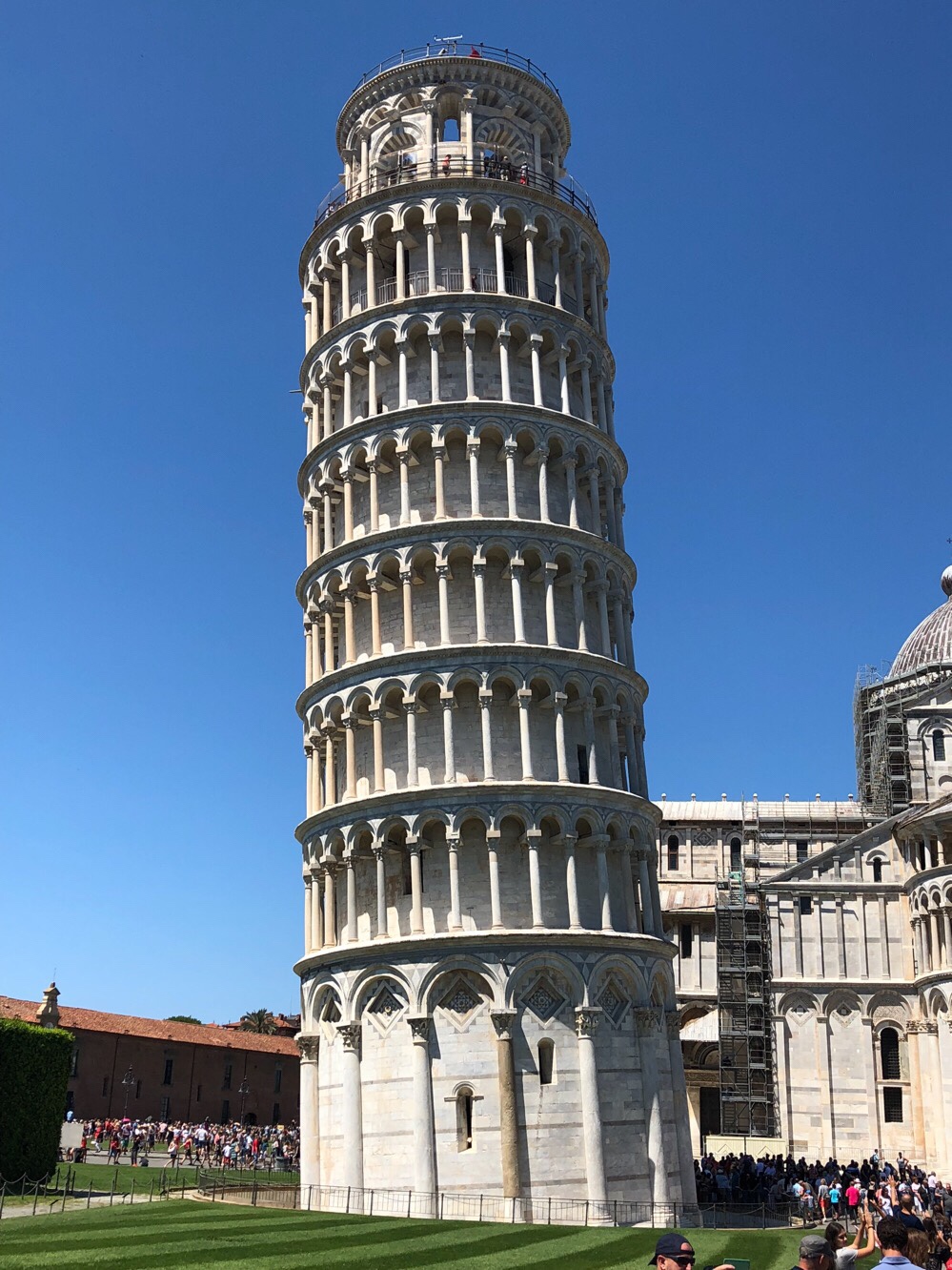 It’s become something of a cliché, perhaps, the ‘Leaning Tower’, but it’s truly extraordinary. The bright green grass, the azure sky and the brilliant white of the tower were an incredible sight, even leaving aside its crazy angle. It’s beautiful, gorgeous pillars, sort of bigger than you think it’s going to be and smaller at the same time. It leans at a smidge under four percent, apparently, and was already slipping when they’d built only three of its stories – you can see the correction in angle beginning in the upper part of the tower. 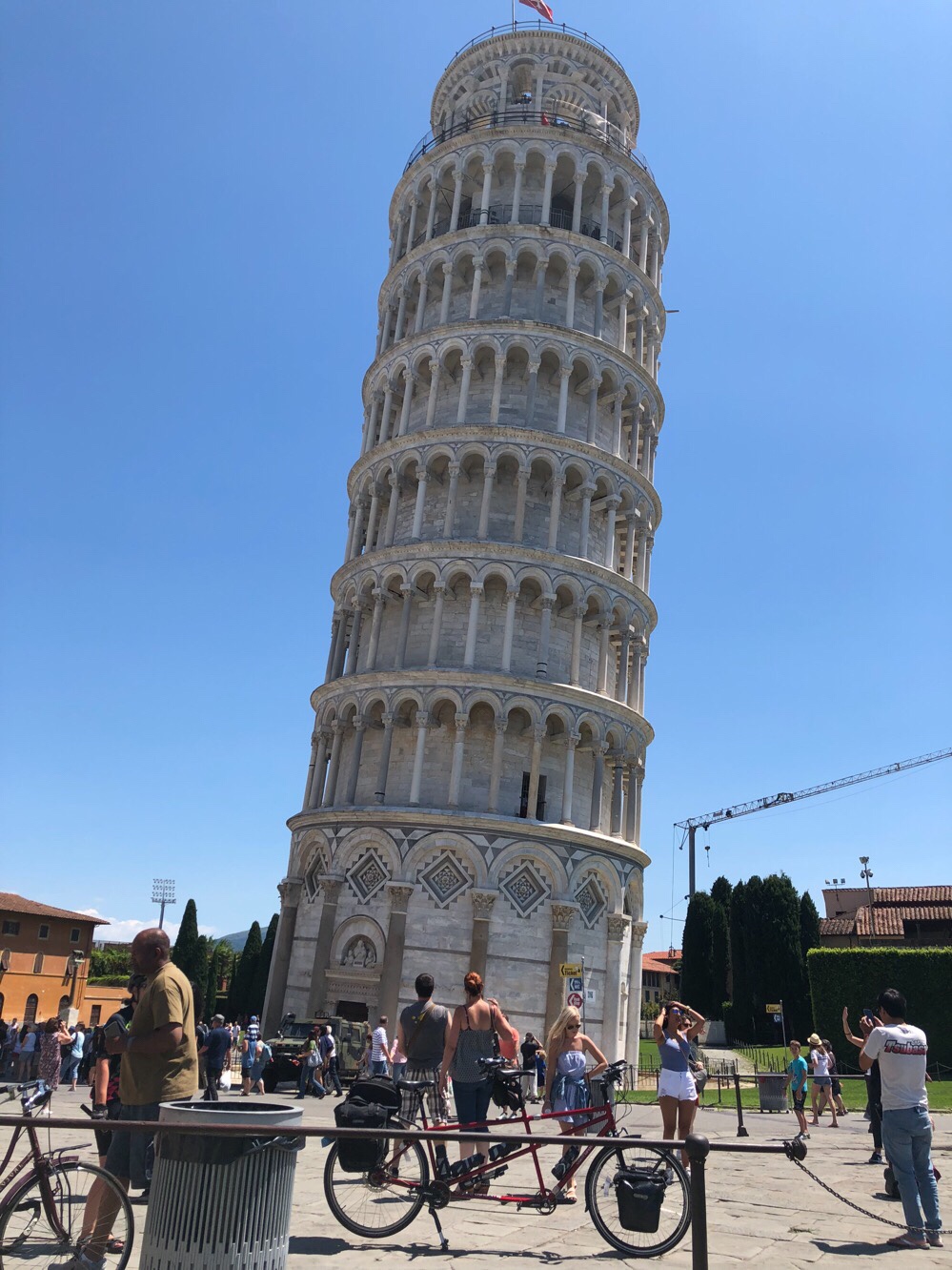 The poor old duomo right next door hardly gets a look in – anywhere else and it would be an attraction in its own right, but being next to the tower, it’s very much the secondary thing. 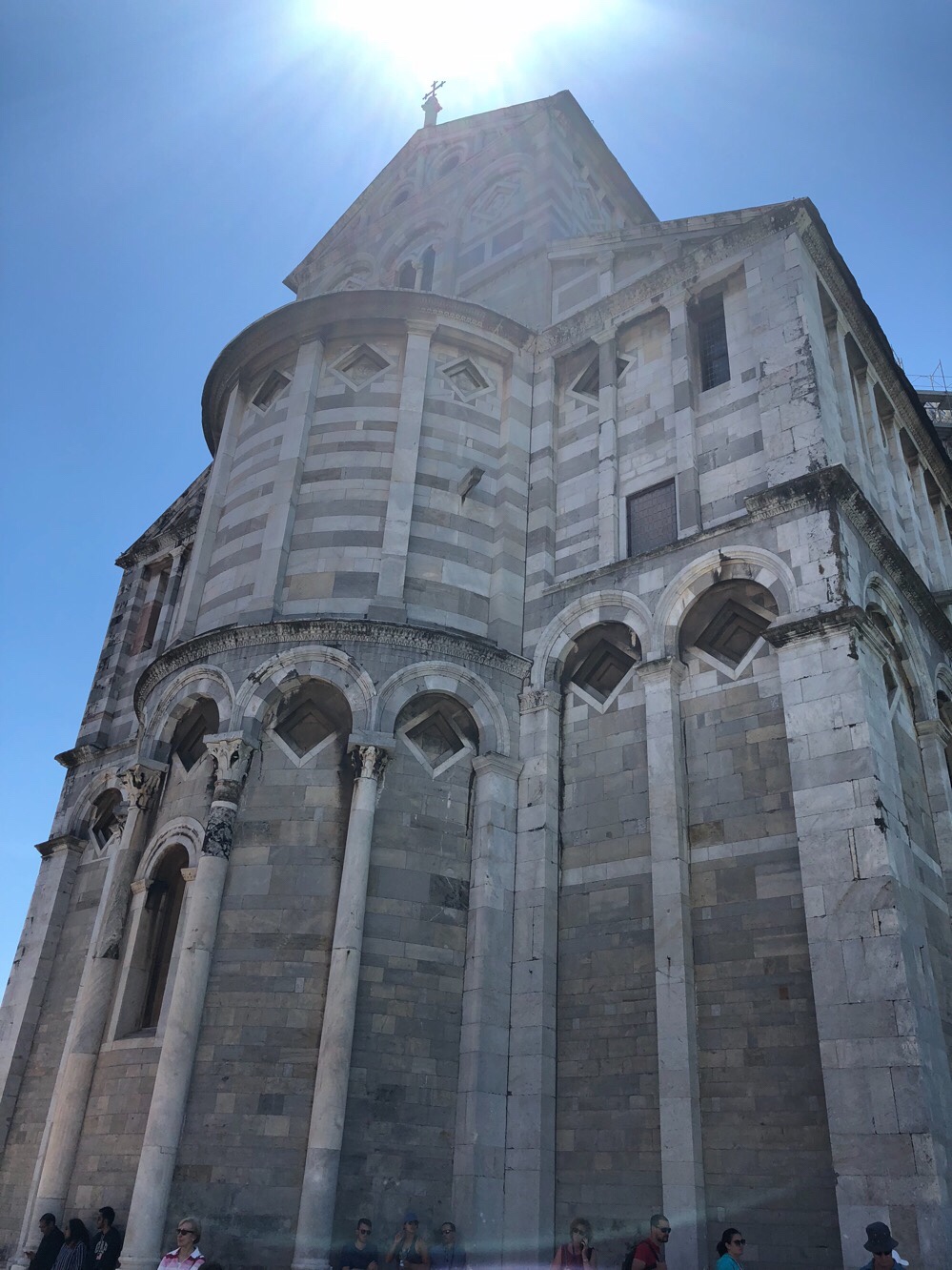 There’s also a very striking baptistery round the back. 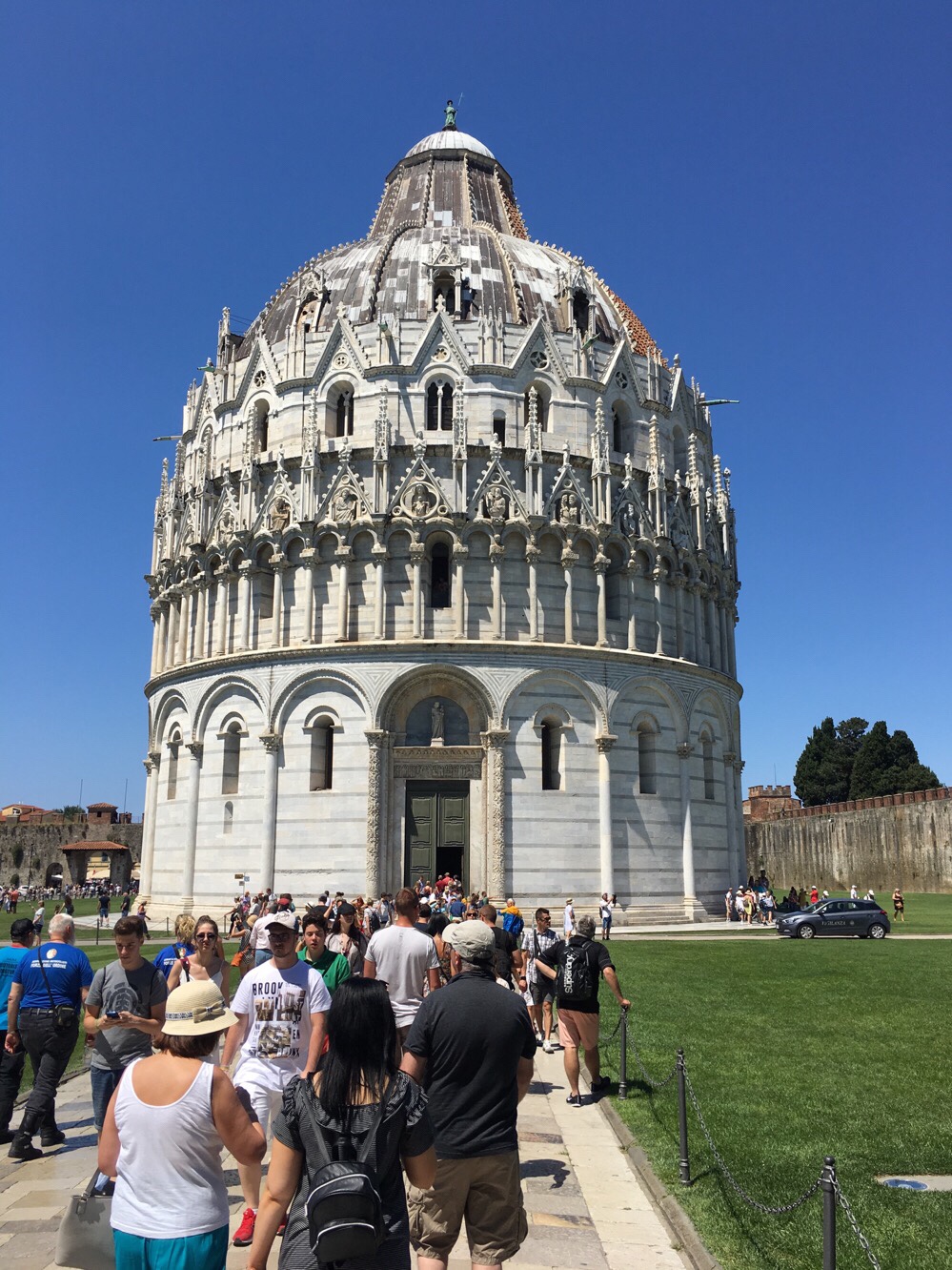 It was absolutely heaving, with an awful lot of “me holding up the Leaning Tower of Pisa” picture-taking going on!

We took lots of pictures ourselves, and then headed out of the madness towards the mountains. We found ourselves riding alongside an aqueduct, for kilometre after kilometre. 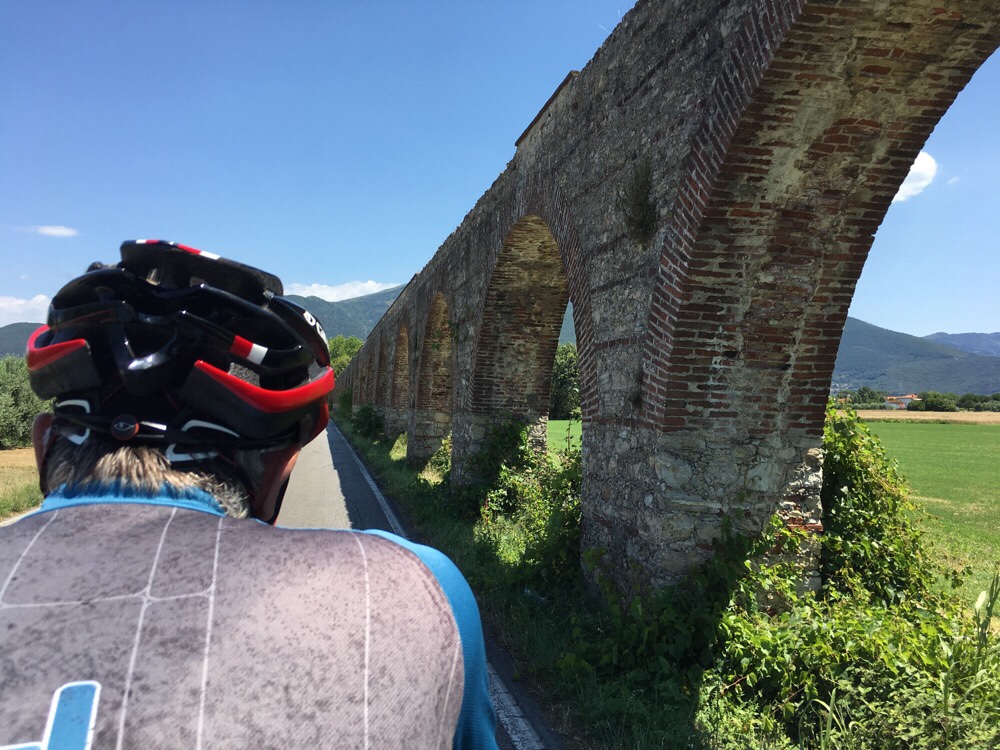 Later research indicates that it was the Medici aqueduct of Asciano, six kilometres long and more than nine hundred arches. The precision required to build a successful aqueduct that long is amazing for the time. Much of it is still standing.

We had lunch in Asciano, then pushed on to Cascina, past this weird rock formation with the ruins of a tower on top. 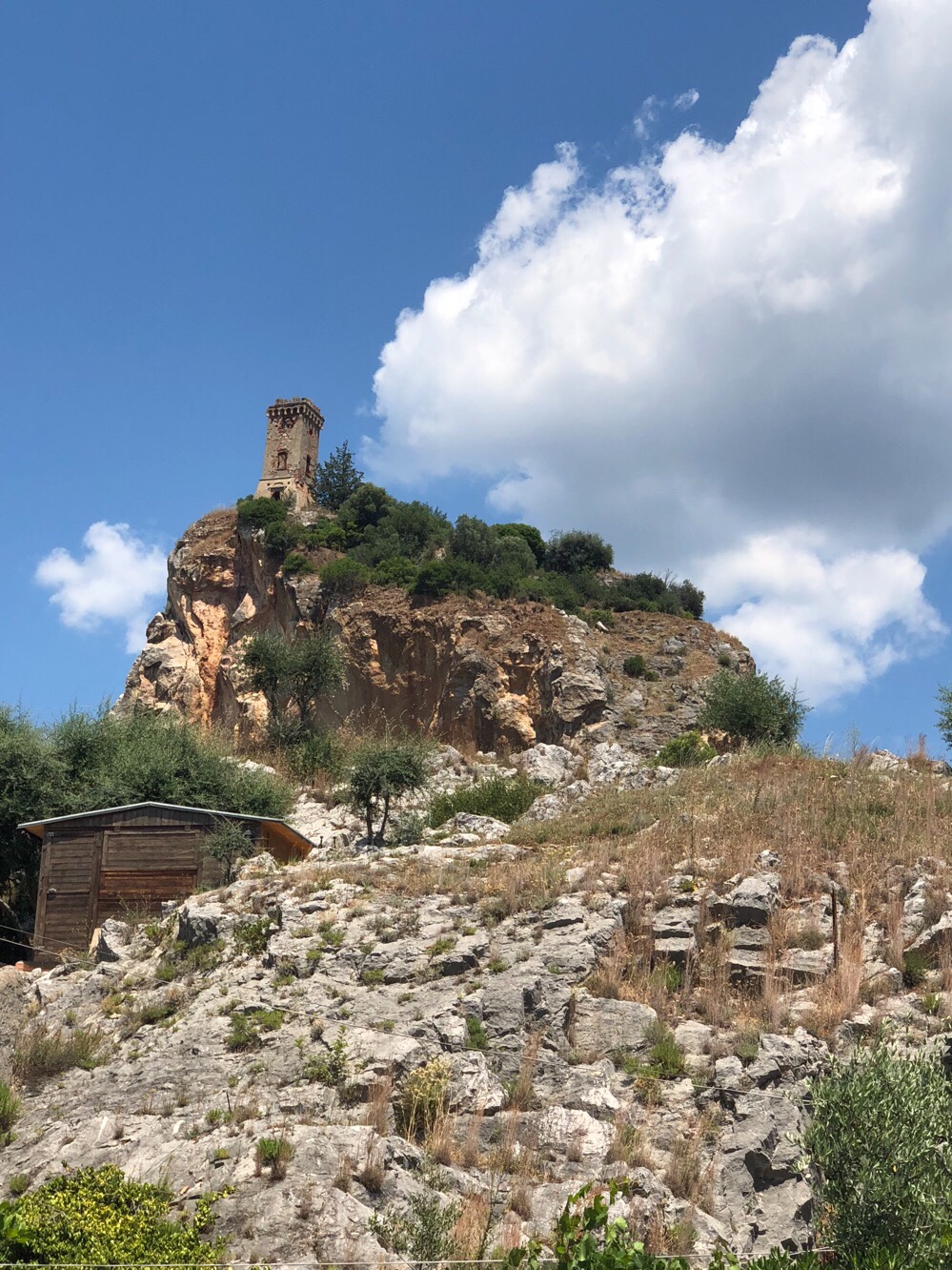 We’re settled into our apartment now, with risotto planned for tea, and a bottle of wine from the supermarket. We went shopping on the bike, unusually. This seemed the best way to transport the wine: