It was a peaceful spot, Salice Terme, the apartment was very comfortable and had a great view of the hilltop town of Nazzano from the lounge. We had bought some ingredients for dinner from a local shop, and a bottle of the local, slightly fizzy red wine. The cyclists we met yesterday lunchtime had mentioned it, it was really good, especially slightly chilled.

This morning dawned sunny, with beautiful blue skies, and after breakfast and the usual paranoid twenty-five visual inspections to make sure we hadn’t left anything important behind, we set off. In completely the wrong direction.

Well, not entirely true, it was the right direction, but the wrong way to get to the potentially lovely cycle path along the river through the park. Soon sorted, though, and we started through the park, enjoying the breeze and the view of the water.

Then…. BANG! psssssssssss…. A puncture, damn. We hadn’t even gone two kilometres! Good job it was a short day.

We found a shady spot under a tree and inspected the damage – a tyre wall failure, the inner tube had poked through and burst. The Captain had noted only last night that we were approaching our usual danger mileage for tyre wall issues taking into consideration our laden miles here, plus all the miles we did on these tyres in training. We packed away the eminently repairable inner tube for later work, dug out the folding tyre and a new inner tube and put everything together. Several people walking by in the park stopped to commiserate with us, and chat about where we were going, which was nice. “Calme, calme”, said one woman, rather concerned about the Captain’s rather damp appearance after the exertion of pumping up the tyre in the heat! 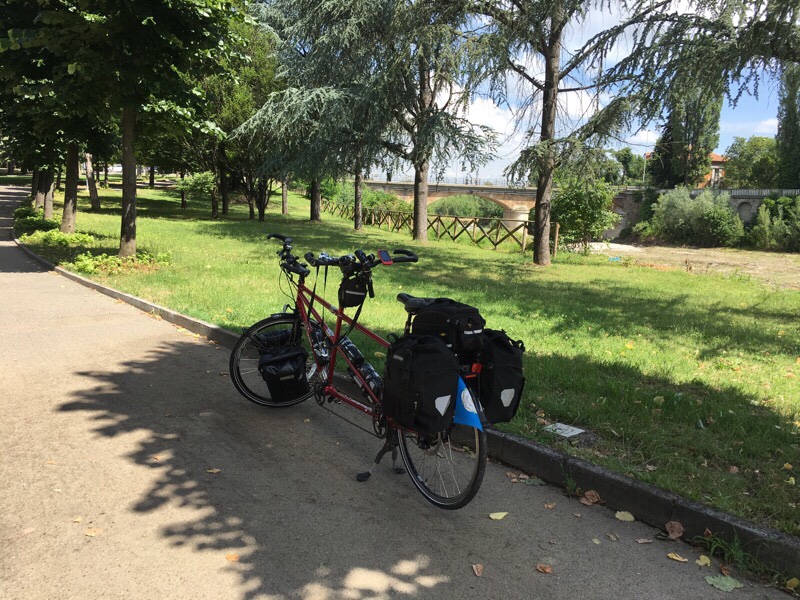 Once we were off and running properly, we hit cruising speed quickly on the cycle path out of Salice Terme, towards Pavia, which we know now from yesterday’s cyclists is pronounced Pah-vee-ah. The path was quiet, smooth, it was great to cycle with no traffic and just the occasional pedestrian to ‘ciao’ with as we whizzed past. 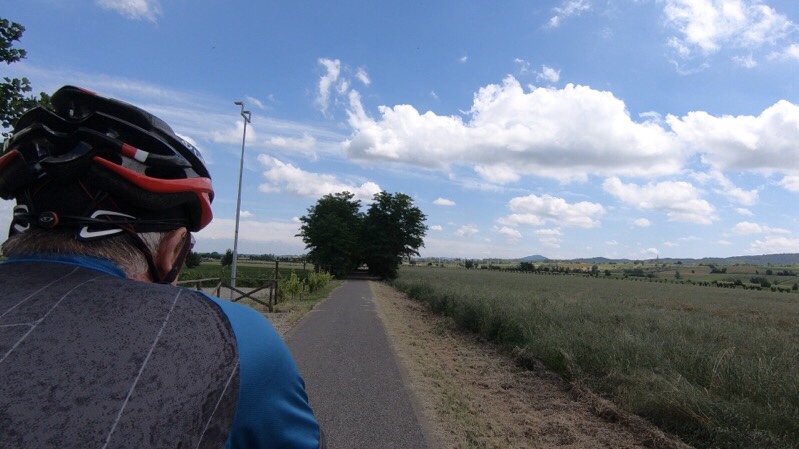 It was no great distance that we had to cover, and so even with our late start and even later restart, we were making good time.

We hit an unavoidable SS road, which are always busy, but this was extremely so, a lot of traffic, quite a few lorries, all patient with us but not very pleasant. Eventually, we discovered why, when the bridge crossing a huge river appeared. The Po! At last! It was enormous, really wide, and so the concentration of traffic suddenly made sense – there are only two places where traffic can cross the river in this area, and this was one of them. 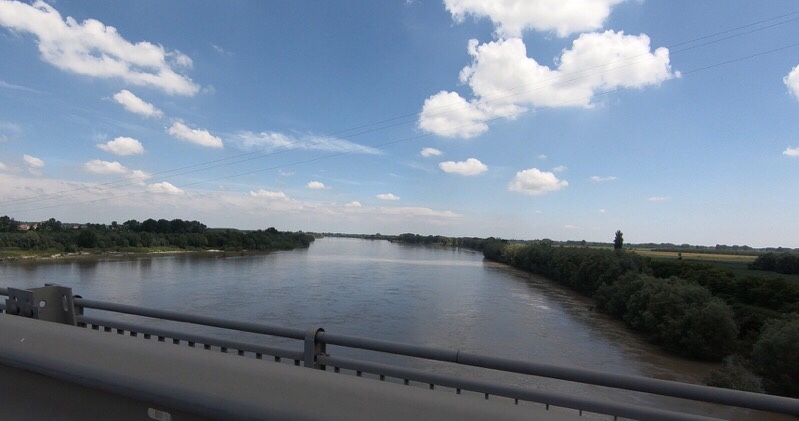 After the crossing, we left the busy road for a smaller one for a while, which was a relief. Pavia seemed to come up really fast, in no time we were crossing the Ticino, parallel to Pavia’s famous covered bridge. 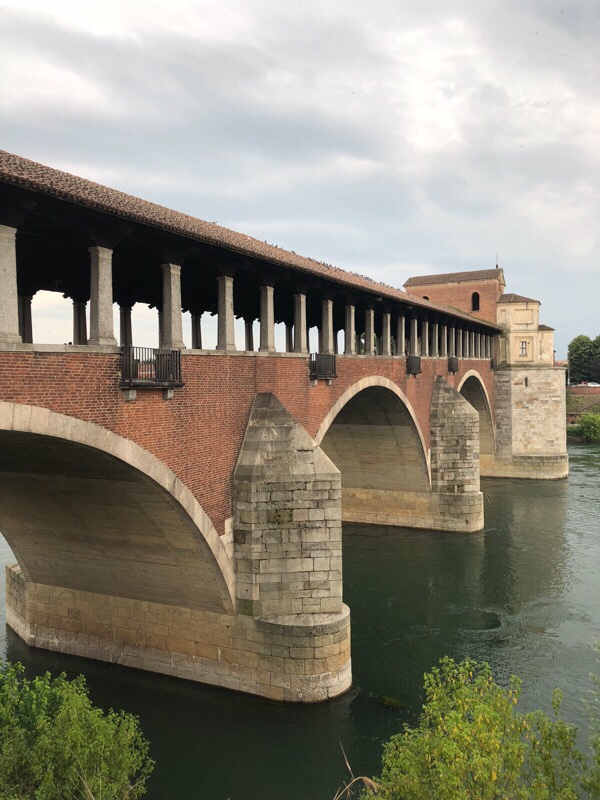 Our lodging tonight is very close to the duomo, so we headed there and had some delicious lunch under the arches in the shade of the duomo. After a rather chaotic check in to our Airbnb apartment, we hit the bike shops of Pavia, coming back with a successfully re-shod back wheel, albeit with a slightly wider tyre.

Pavia is gorgeous, bigger than perhaps expected, but full of little streets in the pedestrianised centre. The duomo is the opposite of the sanctuary at Vicoforte, in that it’s definitely bigger on the inside. Outside, it’s a striking brick construction. Inside it’s beautifully plain, letting the marble and the architecture speak for itself. The dome itself is gigantic. 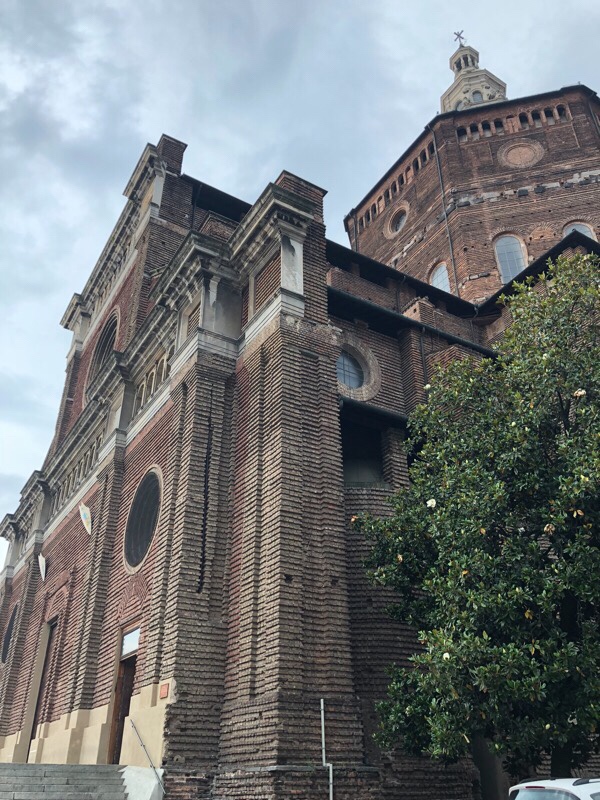 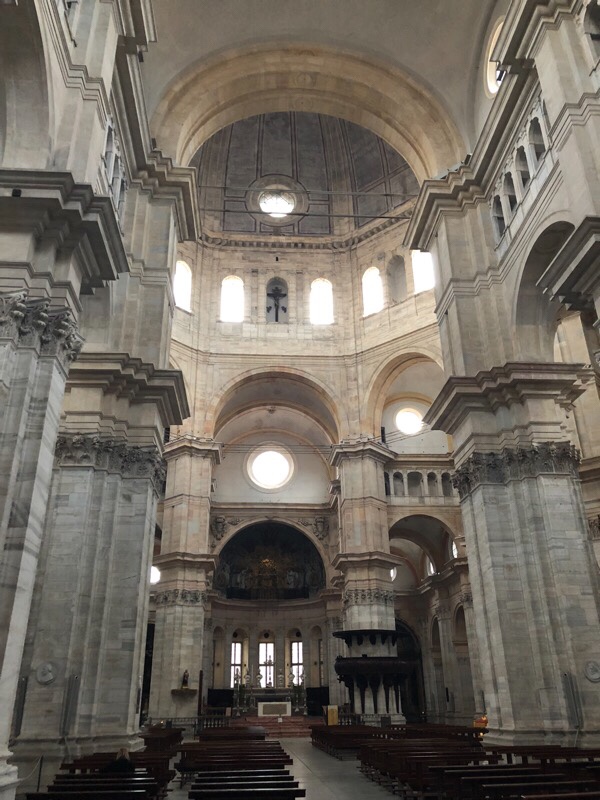 It’s quiet now, just house-martins and swifts calling, and the sounds of people nearby making and eating dinner, chatting as they do. Must be time for us to do the same.